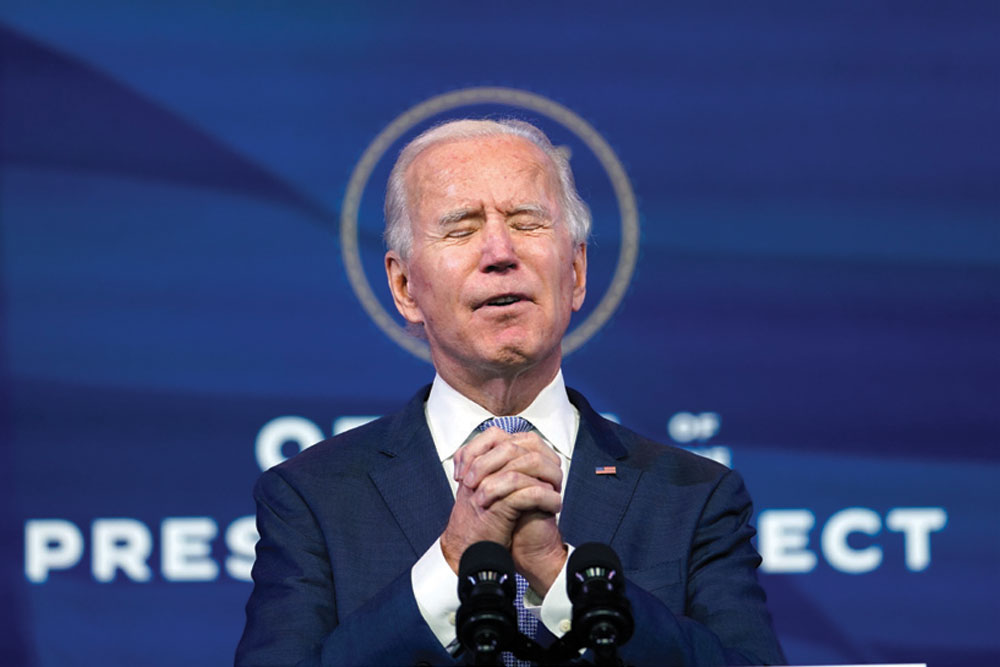 
US PRESIDENT-ELECT Joe Biden will have his work cut out when he takes the oath of office on January 20th. He will preside over a deeply divided America: 46.9 per cent of the electorate voted for Donald Trump; 51.4 per cent voted for him.

Take away the large pro-Biden numbers in the heavily populated blue states of California and New York and the electorate is split right down the middle. Vast swathes of rural America are stubbornly Republican.

As former President Barack Obama conceded in the first part of his two-volume memoir, A Promised Land, his election as America’s first Black president in 2008 set off a white backlash, coalescing a conservative, working-class, racist vote around Trump that underpinned his victory over Hillary Clinton in 2016.
Much has been written about Biden’s likely policies on China, Pakistan, the European Union, Iran and India. Not enough attention has been focused on the challenges Biden faces at home.

As a society, America remains deeply racist. It is easy to forget that till the 1964 Civil Rights Act, non-whites were not allowed by law entry into restaurants in several southern American states; non-white children were not given admission, again by law, to whites-only schools. Segregation was legal—well into the John F Kennedy era.

Religious prejudice too was deep-rooted in the early US. The country was founded by Protestants fleeing persecution in post-Reformation England in the 1600s. Catholics in the US were systematically discriminated against. In 1960, Kennedy, astonishingly, became the first Catholic to be elected president. Biden is the second.
Religion and race have long torn American society apart. Biden’s Irish roots and devout Catholicism make him something of an outsider in Washington despite having occupied every important constitutional post in a career spanning 50 years in politics.

The US establishment has moved beyond its White Anglo-Saxon Protestant (WASP) elitism but Biden was never part of that elite. That makes him a cultural outsider, more in tune with Obama’s ethnically diverse aides than the Washington Beltway establishment.

Biden’s rainbow cabinet is the most racially diverse, women-centric and LGBTQ-friendly in US history. This ironically could backfire. The US is a socially conservative white-majority country: 70 per cent of Americans are white.

Moderates in the Democratic Party are furious with its hard left led by Alexandria Ocasio-Cortez and Ilhan Omar whom they blame for the loss of 10 seats in the House of Representatives. The Democrats now have a razor-thin 222-212 majority in the House. It could vanish in the biennial election due in 2022, giving Republicans control of the House.

Biden’s first challenge apart from tackling the Covid pandemic will not be China or Europe but healing divisions within his party and within the country. Though they have won the White House, many Democrats are shocked and angry at the loss of seats in the House of Representatives and their failure to win a clean majority in the Senate.

That spells trouble for the Biden presidency. If the Democrats lose control of the House and fail to win back the Senate in 2022, the last two years of Biden’s term could end in a congressional policy gridlock. To make matters worse, a glowering Trump, embittered by defeat, has vowed to run again for president in 2024—which the US constitution allows him to do. He will be 78, Biden’s current age, in 2024.

Meanwhile, Trump will use the next four years to be a disruptive influence on the Biden presidency, playing to his racist base and widening the schism within American society.

Biden will be 82 in 2024. He has said he will not run for a second term. That makes Vice President-elect Kamala Harris the default Democratic presidential candidate. A Trump-Harris match-up in 2024 could be America’s worst nightmare, unleashing all the latent racism and misogyny that bubbles beneath American society. With both the Senate and House possibly in Republican hands by 2022 and the White House under siege from rejuvenated Republicans, Biden’s 2020 win could be pyrrhic.

That is why sensible Democrats are advising Biden to move the party back from the left to the centre where its college-educated, liberal base resides. If the party’s hard left gains control, America could be staring at four more years of Trump in 2024-2028. The very thought should have a chilling effect on Biden’s racially diverse Democratic base.