Rohit Sharma and Virat Kohli: Two Men on a Mission

Why do Rohit Sharma and Virat Kohli need to be best friends? 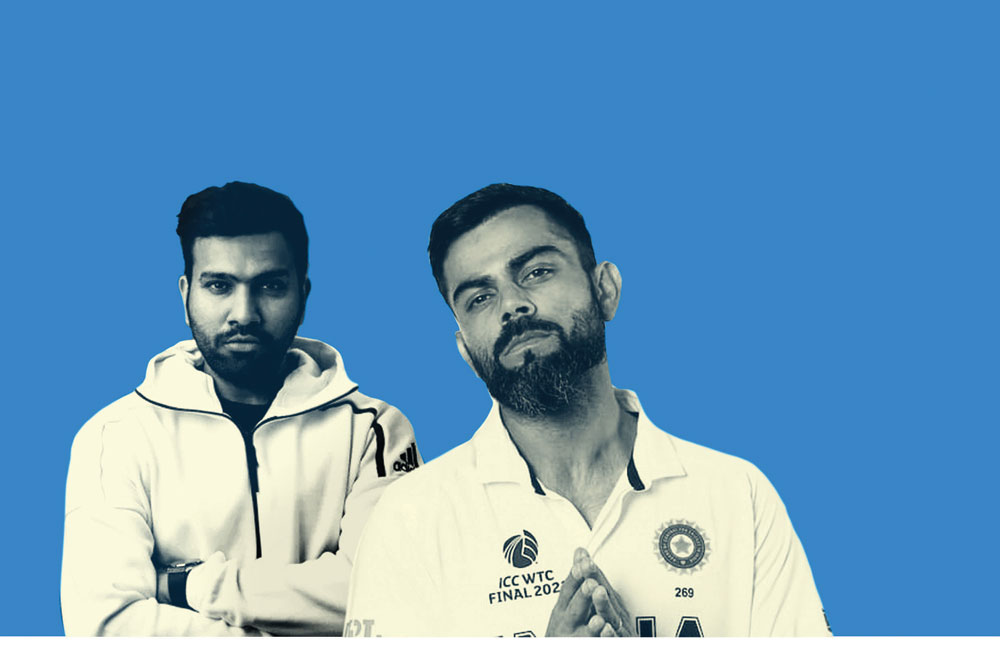 
THE ROHIT SHARMA-Virat Kohli relationship has been a subject of continuous scrutiny in Indian cricket over the past couple of years. Each time Rohit had a mini slump in form, Virat was asked to comment on his vice captain and a possible tension between the two. And now that Rohit is in charge and Virat is going through a lean patch, questions are being directed at Rohit on Virat’s future. Questions are fine but the underlying assumption that not all is well between the two is not. Behind every question is an attempt to get a juicy headline. If there is a word said by either of the two that is open-ended, it can and will be interpreted as a sign of rift. That India’s two best don’t see eye-to-eye is a great media story. The truth is, as Gautam Gambhir suggested to me the other day, not everyone needs to be friends in a cricket team. While referring to the inclusion of Krunal Pandya and Deepak Hooda in the Lucknow Super Giants franchise, Gambhir said, “When I was playing I was never best friends with everyone. But why do you even need to be best friends? All you need is to back each other when you are on the field. Be the best teammates, not friends. Share the same common vision on the field and not in your social space. It is wrong to assume that two players always need to be close friends to perform the best for the team.”

This is what it is about. Whether Rohit and Virat are best friends shouldn’t even be the subject of media scrutiny. Chances are they are not. Two huge achievers need not necessarily go out for family dinners with each other. What they do in their private space isn’t relevant to us. What is of importance is how they back each other up on the field. And in that regard, they have been fantastic. From taking on the media to smiling away at negative questions, Rohit the captain has cocooned Virat each time he has had an opportunity. And as leader that’s how it should be. Talk as they say is cheap and it doesn’t really matter what the world says as long as the two superstars know what they are doing or need to do for Indian cricket.

Speculation that Rohit and Virat do not see eye-to-eye has now been around for years. And it has only grown since Virat stepped down from the T20 captaincy and when news came to light that Rohit was the next all-format captain. Many maintain the team is divided into camps and the captain and former captain aren’t friends. Like I said earlier, do they need to be friends? Do two super achievers who are the two best players in the team need to be best friends to be able to serve Indian cricket? Do they need to get along socially to stay civil in the dressing room? Do their families need to go out for dinner as an indication of camaraderie? The overwhelming answer to each of these questions is “No”. As long as they perform the best for India and serve Indian cricket, whether they are friends or not, or like each other’s company, is not even our concern. In their private space whether they engage or argue is entirely their own thing and not relevant to Indian cricket.


I have known both Virat and Rohit for years and must say they are two very different personalities but have one common goal—excellence. They could have very different routes to success but the ultimate goal remains the same—winning tournaments for India

Steve Waugh and Shane Warne presided over the best period in Australia’s cricket history. The team was literally unbeatable under skipper Waugh and his wrecker-in-chief, Warne. However, it is more than known that the two aren’t best friends. In fact, that they don’t get along is perhaps an understatement. But that did not pre-empt them from taking the Australian team to dizzying heights. On the field they were professionals exactly like Rohit and Virat are and had the sole focus—to win cricket matches for Australia. When Rohit and Virat bat in a World Cup game against Pakistan, for example, do they even bother about what each one feels socially about the other? Do such things even matter? Rather, they just bat to ensure one thing—India wins yet another World Cup contest against Pakistan.

The problem actually lies outside. We want them to be friends having assumed that unless they are, they can’t do well for Indian cricket. Also, if they aren’t great friends it is a good media story. The Rohit camp versus the Virat camp is a good headline. The truth is, every achiever will have an ego. If they don’t, it is news. Not the other way round. Did Virender Sehwag not want to be Indian captain? Of course, he did. Unfortunately, it was the MSD (Mahendra Singh Dhoni) era and Viru had to contend with being a match winner for his country. But was he wrong to want to be captain? Was Warne wrong in wanting to captain Australia, for example? If Virat and Rohit want to outdo each other as performers, is that wrong in any way? Frankly, isn’t that natural rivalry between two of the best players in the world?

We are all very upbeat about India’s bowling attack at the moment. Bumrah, Shami, Siraj, Shardul, Ishant are all doing great and it augurs well for Indian cricket that they are. However, does that mean Bumrah and Shami aren’t trying to outdo each other? Does it not seem fair that two quality bowlers will strive to win the mantle of the team’s main strike bowler? How is such a thing unhealthy and a subject of intense speculation?

I have known both Virat and Rohit for years and must say they are two very different personalities but have one common goal—excellence. They might well have very different routes to success but the ultimate goal remains the same—winning tournaments for India. When I had interviewed Rohit soon after he scored the five hundreds in the World Cup in 2019, my assumption was he would be super pleased with his own performance. The reality was that he wasn’t. He kept saying, “What’s the point in all these hundreds if the trophy has gone to another dressing room?” Rohit was disappointed in not being able to get the real job done and individual accolades did not matter to him. The same would be true for Virat. In a team sport, it is ultimately about the team and never about the individual.

Gary Kirsten had once outlined this rather beautifully to me. It was the morning after India had beaten Pakistan in Mohali in the semi-final of the 2011 World Cup. People had partied till very late into the night and the morning was quiet and calm. Kirsten, along with Paddy Upton, was having breakfast in the team hotel when I happened to meet him. I remember congratulating him for the victory and saying to him that he had built a great team with the bonding in the team looking excellent. That’s when Gary had helped put things in perspective. “Do you think all the 11 players who played are friends?” he asked me. “Do they really need to be?” he went on. “All I want is when the final catch goes up each of the 15 members should pray that the catch is taken for the country. If after that they don’t dine with each other or spend social time with each other it doesn’t even matter to me,” he concluded.

There can’t be truer words. Gary Kirsten had also outlined the essence of corporate philosophy. Not everyone can be a friend of the other in a large corporation but each will have to stand up for the institution they work for. That’s all that is asked. In the case of Rohit and Virat, that’s all that matters really. We want them to be at their best in the upcoming World Cup and try and do a job for India. Who’s friends with whom is a subject best left to OTT scriptwriters. That’s reel. The real is two men who are thorough professionals trying to do a job for the country. With the World Cup seven months away, it is time we left it at that and just backed both to try and win an ICC Trophy for India after nine years.