Mamata Banerjee, usually a small eater, is not happy with the diet and the 5 kg she has gained by being confined to the wheelchair 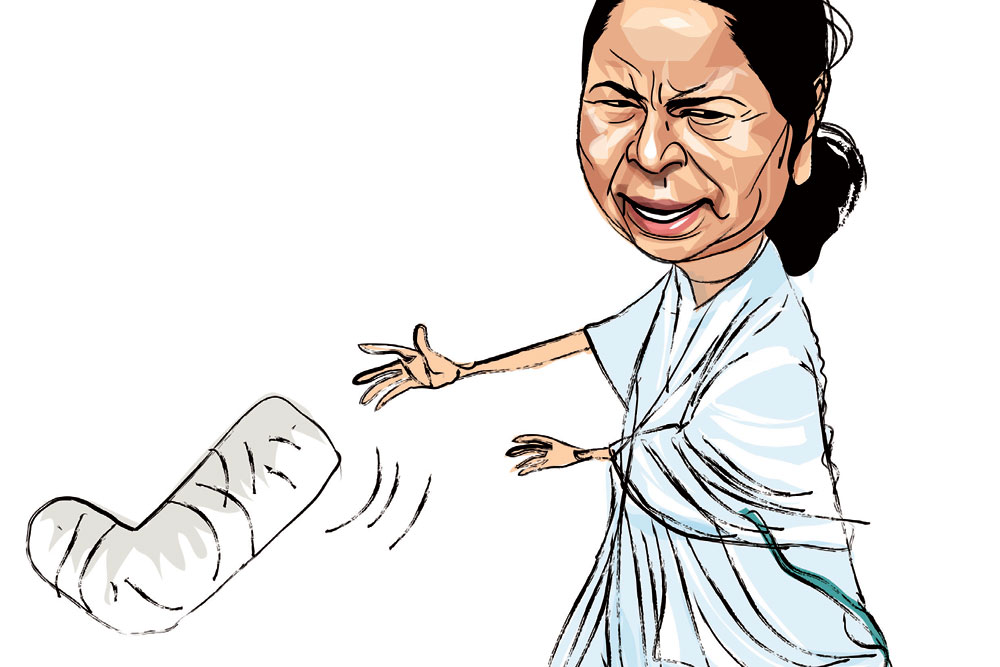 
West Bengal Chief Minister Mamata Banerjee is now up and about and has no need for the wheelchair she used during the state Assembly polls campaign. But on doctors’ advice, she cannot use her favourite treadmill yet for her daily 25 km walk regimen. A team of doctors has also advised her a zero-restriction diet owing to the pandemic. So apart from rice with clarified butter, boiled egg and an apple, the chief minister is learnt to be indulging in fish and chicken too. But Banerjee, usually a small eater, is not happy with the diet and the 5 kg she has gained by being confined to the wheelchair. She does her pranayam regularly and wants to take to the treadmill with gusto next month.

Will Mukul Roy rejoin Trinamool Congress (TMC)? It is learnt that Roy is not happy with West Bengal Bharatiya Janata Party (BJP) chief Dilip Ghosh and the saffron party’s strategy in Bengal. He was not keen on fighting the election, but did so nevertheless on the advice of the party’s Delhi bosses. Having won the election, he skipped the first meeting of the newly elected BJP MLAs of the state Assembly saying he was unwell. Speculation about Roy returning to TMC was sparked when Mamata Banerjee compared Roy with her Nandigram rival Suvendu Adhikari in March, claiming that Roy was not “as bad as Adhikari”. Also, there is a rumour that TMC leaders helped Roy win. But with a barrage of cases against him, BJP can unleash both the CBI and the Enforcement Directorate if he doesn’t toe the line.

Rajasthan Governor Kalraj Mishra recently convened an all-party meeting on the coronavirus where Congress and BJP state presidents were present. Earlier, Chief Minister Ashok Gehlot, too, called an all-party meeting on Covid. Gehlot called for a united stand against the pandemic and said the state needed oxygen and vaccines from the Centre. Despite differences with Gehlot, Mishra, known as Delhi’s man in Jaipur, echoed the chief minister’s plea at the meeting that he held and called for an all-party consensus on Covid-19.

Why is Shiv Sena praising Congress publicly? Sena leader and Maharashtra Chief Minister Uddhav Thackeray said his party was handling Covid using the health methods established by the Nehru-Gandhi family. Having tackled the infection better than other states in the second wave, Maharashtra is fast becoming a case study, and Thackeray’s Covid management, the talk of the town. But BJP has always been critical of the Gandhi family as well as the rising Covid numbers in Maharashtra. With ally Nationalist Congress Party trying to gain an upper hand in the state and Congress leader Rahul Gandhi unhappy with Sena, Thackeray’s move is considered nothing short of a masterstroke.

India’s national capital has earned so much notoriety in the second wave of the pandemic for not having been able to control the situation that most foreign missions based out of Delhi now wear a deserted look. With rapidly deteriorating Covid infrastructure in the metro, most diplomats and their families panicked and left for their respective countries. In the time of the coronavirus when work-from-home is the norm, it is expected that diplomats would do their day-to-day work virtually.

Assam Chief Minister Himanta Biswa Sarma is the state’s first BJP chief minister with roots in Congress. Sarbananda Sonowal had joined BJP from Asom Gana Parishad (AGP). Apart from his proximity to Home Minister Amit Shah, Sarma is known for his adroit handling of political operations in Assam. In the state, almost 60 of the 75 MLAs supported him for the top post. Also, Sarma’s influence in the northeastern states is well known, which was there for all to see at his oath-taking ceremony in the presence of Tripura Chief Minister Biplab Kumar Deb and other chief ministers from the Northeast.

The Punjab Assembly election is to be held next year and Congress chief Sonia Gandhi is concerned about the big inside battle between Chief Minister Amarinder Singh and former Punjab cabinet minister Navjot Singh Sidhu. Sidhu met Singh and the Congress high command and tried to patch up, but he wants the chief minister’s post. According to Congress, what happened in Assam is not possible in Punjab as some in the party feel that Sidhu should not compare himself with newly anointed Assam Chief Minister Himanta Biswa Sarma. Singh, too, is dismissive of Sidhu. Can Sidhu rejoin BJP, the party he trucked with before signing up with Congress, for next year’s Assembly election?

Sandeep Dikshit, the son of late Delhi Chief Minister Sheila Dikshit, recently attacked the Kejriwal government for the mismanagement of Covid-19 in Delhi. In his tweet, Dikshit did not blame the Modi Government at all, which prompted BJP IT cell chief Amit Malviya to retweet him. So, the gossip now is whether Dikshit is joining BJP in Delhi. When he did not fight the last Assembly election, the same rumour was rife. Considering that Congress leader Rahul Gandhi never gave him political importance, could he join BJP now?

You cannot stop Subramanian Swamy, the one-man army in BJP, which gave him a Rajya Sabha ticket long ago. Swamy recently suggested that BJP’s new headquarters at Delhi’s Deen Dayal Upadhyay Marg should become a Covid centre. He said that barring a floor for party workers, the other floors should be dedicated to Covid patients. Besides, other party-centric work can take place from the erstwhile headquarters on Ashoka Road, he said. Swamy feels such a move can help boost BJP’s image.

The Art of the Deal

At the G7 foreign ministers’ meeting in London, External Affairs Minister S Jaishankar, though physically present in the city, attended the event virtually since two members of his delegation were found to be Covid-positive. In London, Jaishankar is also believed to have met Serum Institute’s Adar Poonawalla, who had left India for the UK due to ‘unprecedented’ threats. Now it is learnt that Jaishankar, with his good negotiation skills, has resolved the issue.