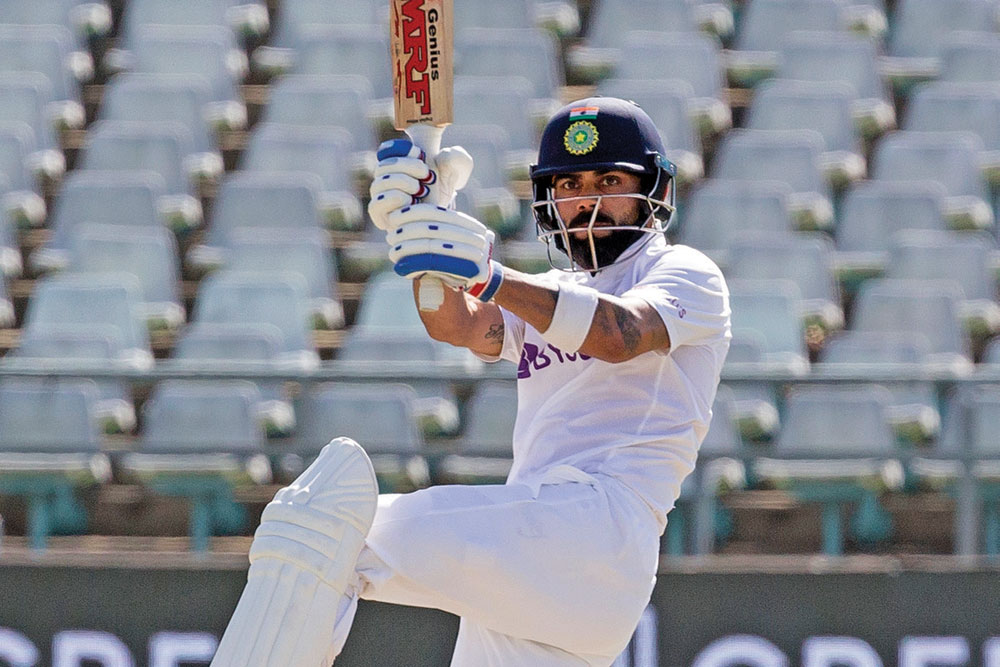 
IT WAS AROUND 2PM on January 18th, 2021 and the enormity of what India was up against on Day Five at the Gabba was slowly dawning on us. Australia had set India a target of 328 and on a wearing pitch were overwhelming favourites to close out the series 2-1. The ball had started to misbehave from the cracks and it was going to be a serious test for India’s batsmen against the likes of Pat Cummins, Josh Hazlewood, Mitchell Starc and Nathan Lyon. Maybe it was on an impulse that I sent a message to Virat Kohli. How good would it be had Virat been there on Day Five to bat at No 4 for India? India’s best batsman for years, he had the skill and pluck to stand up against a hostile fast bowling attack in alien conditions and, more importantly, he is a figure of strength in the dressing room. Also, the way he had batted in the first innings at Adelaide against the pink ball was proof of his class and his presence at the Gabba would have given the team that much more comfort going into the final day of the series.

Within minutes of my sending the message, Virat replied that India had batsmen to do the job and that this was the day the team had been waiting for. He said it did not matter if he was there or not, for the men who were there at the Gabba were all capable of making history. Virat, it was clear, was the absent present in Brisbane. He was on paternity leave and may have been home in Mumbai with his wife and newborn daughter but one side of him was at the Gabba with the boys, urging them to achieve the unthinkable. “For years we have prioritised Test cricket. It is time we get the rewards for all the hard work we have put in,” he wrote. Candid and matter-of-fact. Losing wasn’t a consideration and India’s captain had complete faith in his deputy and the rest of the boys doing duty in Australia. When I mentioned to him that it would be the best series victory ever if it happened, Virat responded in a flash stating he would be the happiest for this was what the team had been building up to since he had taken over as India’s red-ball captain in Australia in December 2014.

It wasn’t something Virat was telling me for the first time. In almost every interview I have done with him in the last seven years and in almost every conversation we have had, he has repeatedly harped on the importance of Test cricket. “If you wish to be remembered in cricket history you need to do well in Test cricket” is the Virat mantra and is the message he has passed on to his team.


In almost every interview I have done with him in the last seven years and in almost every conversation we have had, Virat Kohli has harped on the importance of Test Cricket. The other thing which Virat has done is address the key issue of the fear of failure

The other thing which Virat has done is address the key issue of the fear of failure. Even after Adelaide and the 36-All-Out, he was unafraid while facing the media and in declaring that he was finding it hard to come to terms with what had happened. At the same time, he was confident Adelaide was an aberration and would never happen again. “I have to take accountability for my failures just as I take responsibility for my success,” he said to us in one of our many conversations last year. “The media has a job to do. They are within their rights to criticise me if they want. My job as the captain of the Indian cricket team is to lead the team to the best of my ability in all formats of the game. As long as I am true to myself and prepare the best each time I step out to lead India, I am not concerned about what is being said or written about me. I know how hard I work and as long as my preparations are exactly the way I want them to be, results will come.”

This conversation had taken me back to another one with Virat sometime after India had lost the World Cup semi-final to New Zealand in Manchester in July 2019. He had been dismissed for one to an incoming Trent Boult delivery, a ball that television replays showed was clipping the top of the stump. The decision could have gone either way and it was unfortunate for Virat and for India that the umpire’s dreaded finger had gone up.

“Honestly when we went to the World Cup I had this very strong feeling in my heart that the team would need me in some game and it would be a chase and I swear I had this feeling so strong that I am going to come not out at the end of the game and take India through that rough phase. And I really felt strong that was the game (semi-final vs New Zealand). When I walked out to bat, I knew this is the game but maybe that was my ego talking because how can you predict something like that? You can only have a strong feeling or maybe it was a strong desire of mine. But it did not turn out that way. My dismissal was really disappointing for me. This wasn’t because I hadn’t scored. It was because I had failed to contribute to the team and we had lost a match that we should have won,” he had said.

His legacy will live on and whoever comes on as leader will find it tough to match his record. I would hope that Virat, much like Sachin, will play on for another five years. Virat the captain may have stepped down, but Virat the batsman is still there as India’s best

Virat, who by his own admission hates losing, has a rather interesting take on dealing with failure. “It is not easy. If you ask me, do I get affected by failure? Yes, I do. Everyone does. I am human at the end of the day. It is difficult to process failure on the big stage. But you have to understand that I totally believe in the fact that what’s meant for you will happen. Success and failure are a part of everything that we do in life. Whether it is sport or daily life, it is the truth of life and you need to be able to accept both with grace. That’s the thing I have learnt. You can’t say I am the king of the world when you succeed or we are invincible now and when you fail you beat yourself down so much that you can’t wake up again. In fact, failure is a great way to analyse what went wrong and to improve on those. Cricket is all about that. Life is all about that. Making a mistake and having the courage and clarity to say ‘Ok, I have made a mistake’ is what is most important. I am not going to be egoistic about it. Rather, I will rectify the mistake and walk forward,” said Virat.

Maybe it is this sense of acceptance that eventually prompted him to give up the captaincy. Maybe he was genuinely mentally fatigued and tired after seven years at the top of Indian cricket. Whatever may have been the trigger, his legacy will indeed live on and whoever comes on as leader will find it tough to match his record of 40 wins. While on the debit side, he will have no major ICC trophy to show, the credit side does have a lot as well. First and foremost is the belief that we can beat anyone in any condition in any part of the world. For every WTC final loss Virat does have an Australia series win and an England 2-1 lead to show. It was under him that India destroyed England within hours at Lord’s and won a heroic victory at the Oval. Yes, he had a fantastic opportunity in South Africa and he let it go and that may have prompted him to call it curtains. His troubles with the Board of Control for Cricket in India (BCCI) did not help either. With Rohit Sharma, the designated Test match vice captain, set to take over, I would hope that Virat, much like Sachin, will play on for another five years and score heaps of runs for India. Virat the captain may have stepped down, but Virat the batsman is still there as India’s best and the team need him to stand up each time they play for the next few years.