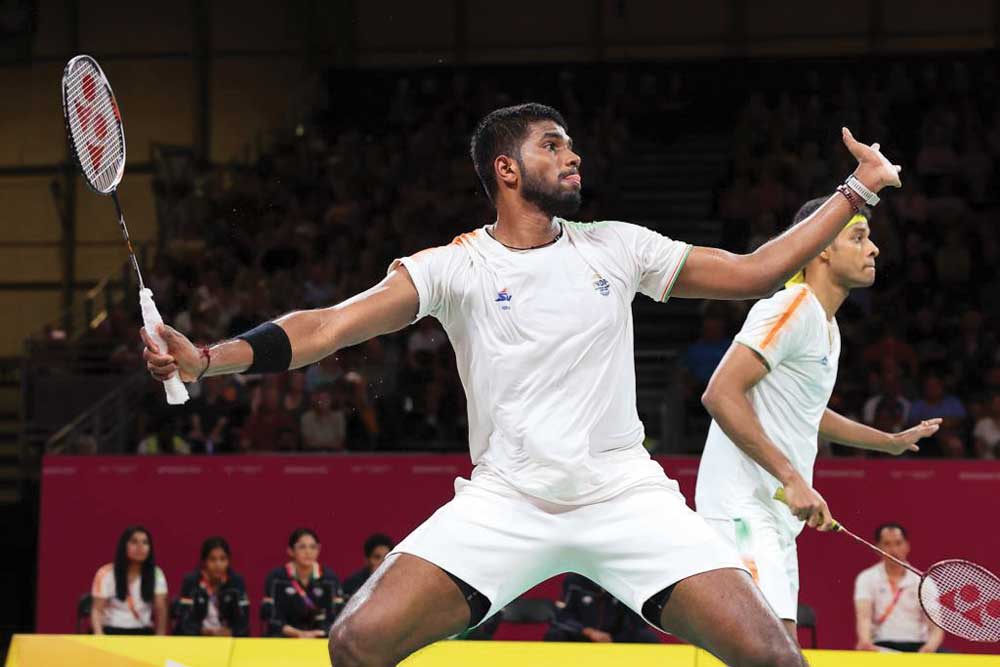 Satwiksairaj Rankireddy and Chirag Shetty at the Commonwealth Games in Birmingham, August 1, 2022


“THEY HAVE A complete game and are surely going to be the team to watch out for in the next few months. If you check, there are few like them around the world. They have the physical strength to hit the big smashes, they have the defence and age is on their side. They will only get better. And having played in Tokyo and knowing what it is all about, they will surely be one of our best bets for Paris,” said Pullela Gopichand when I asked him about Satwiksairaj Rankireddy and Chirag Shetty, and how he sees them shaping up in the next two years.

Between 2021 and 2022, Satwik and Chirag have become a force to reckon with globally. They had the talent but the belief that they can win on the big stage and have an impact has come in the last one year. Two Super Series titles, the incredible Thomas Cup win and also the CWG gold—it has been a fantastic year for India’s premier doubles pair.

The question is: What is working for them and how can they get even better?

For the longest time, the doubles game was ignored in Indian badminton. It was all about singles and hardly any real attention was given to doubles. Unlike in some other sport, doubles in badminton is as important and as competitive as singles, and we in India have taken long to realise this. In fact, this is where Gopichand made the maximum difference. He was able to convince the country about the importance of doubles, get focus back on it, and now Satwik and Chirag have all the facilities they need to further improve their game. Mathias Boe, India’s specialised doubles coach and one who has been with Satwik and Chirag all through, has made a serious difference to the pair.

I had once asked Gopi what the coach does at critical situations in a game. How does he contribute and make a difference? His answer was fascinating. “You are not there to teach them how to play. They know it and know it the best. But in the course of a match, you often see things the players don’t see. And that’s where you make a difference. In sum, you help them win. Tell them things they haven’t observed.”

That’s what Mathias Boe has been able to do. Make Satwik and Chirag get better at key points. Help them hone their talent and be the best in the world. And maybe that is the reason the Badminton Association of India (BAI) will do well to convince Boe to stay on and be with the boys till Paris 2024. While there are rumours about Boe not wanting to extend the contract, it is in India’s interest not to let him go.

The journey of SAT-CHI, however, isn’t complete. While they have won the French Open Super Series, it is important to note that they have not yet been able to beat the ‘Minions’ in 11 attempts and have a 0-7 record against the Malaysian pair of Cho and Shia. In the most recent world championship semi-final, Satwik and Chirag had their moments. They won the first game and had opportunities in the second. Unfortunately for them, they weren’t able to close things out. Is it a mental block against these two teams? Maybe yes, and that could well be the next part of their journey. Getting the better of these two teams could well be the final frontier for Chirag and Satwik and it shouldn’t take too long to achieve this if 2022 is any yardstick.

What works for them is that they are very different and yet very similar. They travel and stay together and yet their habits and likes and dislikes are profoundly different. While Chirag is outgoing and flamboyant, Satwik, his Paris dance notwithstanding, is an introvert. While Satwik prefers Indian food, Chirag is the opposite and loves his Japanese and other global cuisines. So how do they manage? They either go to a food court where all options are available or one of them eats first while the other offers company, and then they go to a place where the other gets his preferred food. They have figured out their own ways of backing each other up and it is working well for them.

Most importantly, they are there for each other on bad days. “If you are playing doubles, the first thing is you can’t blame your partner for an off day. You win together and you lose together. You need to take it on the chin and move on. Things won’t go well for you every day, and you need to understand that as sportspeople,” said Gopi.

“We know we are different and that’s how it should be. Satwik prefers to do his own thing while I love going out,” said Chirag in a detailed interview ahead of CWG in Birmingham. On the court, however, they are hardly different. They have now brought aggression to their game and we have seen a very expressive Satwik in Paris. What was excellent to see was their ability to come back from difficult situations. On multiple occasions, they were able to save game points and come back and win key points to seal a game. And when you are able to do that against different opponents, it shows self-belief and confidence.

As long as Satwik and Chirag are able to maintain their fitness and stay focused, they will surely go to Paris as one of the contenders. For a country starved of Olympic champions, this pair is easily the next big thing in Indian badminton. In fact, they have already won multiple titles in 2022. But with India living off Olympic titles, their moment could well come in the very same city they won their French Open title. In Tokyo, they came close by beating the famed Chinese Taipei pair in the very first match of the competition, and it was sheer bad luck that they had to bow out having won the same number of matches as the two other teams in the group. The Chinese Taipei pair went on to win gold, proof of how close the competition was.

As they travel to Germany for their third competition in two weeks, a prediction is in order. 2023 could well be the year when they dominate the world doubles, and over•come the final frontier by beating the Minions and winning against the Malaysians. That’s when the journey will come full circle for Satwik and Chirag, a journey that started in earnest some seven years ago and was honed at the Pullela Gopichand Badminton Academy in Hyderabad. They are two young men living a dream and are focused on a mis•sion. With serious support coming their way, there is no rea•son why they should not be able to fulfil their aspiration of winning an Olympic medal and giving India the first-ever doubles medal in badminton at the Olympics.