The Theology of Liberation

The Shiva Purana is the key to saving the fallen 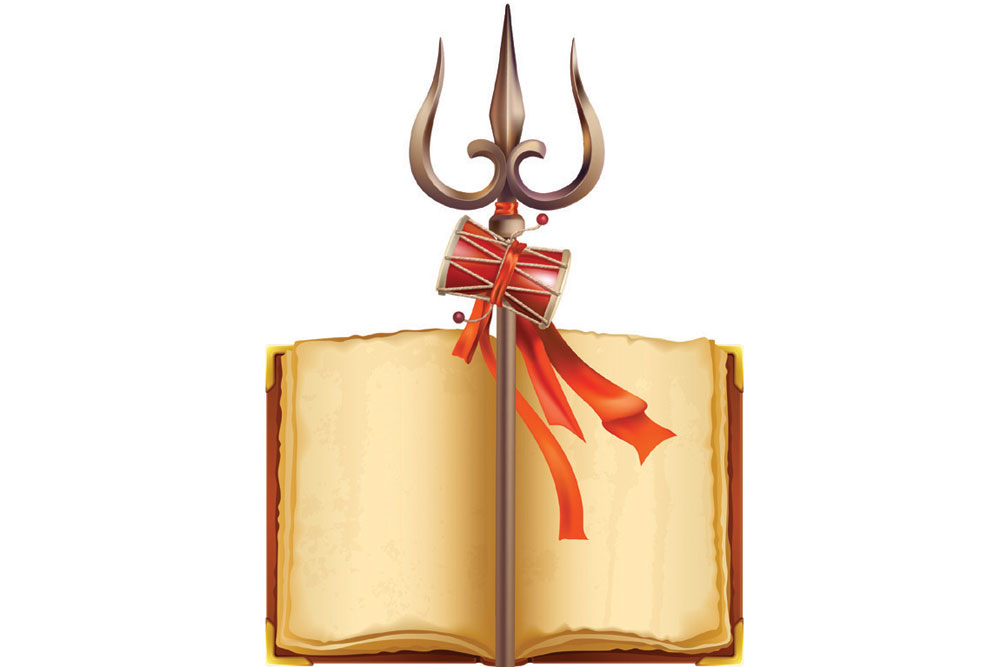 
WE ARE STILL left with Binduga. Let me now complete the story of Binduga’s emancipation.

On one occasion, Chanchula approached Devi Parvati and prostrated herself before her. Overwhelmed with great bliss, she joined her hands together and praised her. Chanchula said, ‘O Girija! O Skanda’s mother! Men always worship you. You are the one who always bestows happiness. You are Shambhu’s beloved. You are the form of the brahman. Vishnu, Brahma and others serve you. You possess gunas. You are also nirguna. You are the subtle and original Prakriti. Your form is sachhidananda. You are the one who causes creation, preservation and dissolution. You possess the three gunas. You are the abode of the three divinities. You are the supreme one who establishes Brahma, Vishnu and Mahesha.’ Chanchula, who had already obtained a virtuous end, addressed Maheshi in this way and stopped. Her shoulders were bent down. Her eyes were full of tears of love.

Parvati, loved by Shankara, was filled with compassion for her. Full of great love, the one who loved her devotees spoke to Chanchula. Parvati said, ‘O Chanchula! O friend! O beautiful one! I am extremely pleased with this praise. Please ask for the boon you desire. There is nothing that cannot be given to you.’ Thus addressed by Girija, Chanchula prostrated herself before her. Asked in this way, she was filled with great love. She joined her hands in salutation and bent her head down. Chanchula said, ‘I do not know where my husband is now. Nor do I know the destination he will go to. O Girija! O unblemished one! Please act so that I can be with him. O fortunate one! O one who shows compassion towards those who are distressed! O Mahadevi! O Maheshani! My husband is the husband of a vrishali. He died before me. I do not know what has happened to that sinner.’ Hearing Chanchula’s words, Parvati spoke to her. The affectionate Girija addressed her in extremely loving words: ‘O daughter! Your husband, Binduga, is foolish and a great sinner. The foolish one became attached to a courtesan. After death, he went to hell. For a large number of years, he underwent many kinds of hardships in hell. The one with evil in his atman still needed to exhaust his sins. Therefore, he has been born as a pishacha in the Vindhyas. Right now, he is a pishacha, suffering from many kinds of miseries. He suffers from miseries caused by vata. [In Ayurveda, the three doshas or humours in the body are vata, pitta and kapha and they are always striving against each other. These can be loosely translated as wind, bile and phlegm. Stated simply, Binduga was suffering from indigestion.] He always has to bear hardships.’ Hearing Gauri’s words, Chanchula was moved to tears. Because her husband was going through these sorrows, she too was extremely miserable. She steadied her mind and prostrated herself before Maheshvari again. With an anxious heart, the lady asked again. Chanchula said, ‘O Maheshvari! O Mahadevi! Please show me your compassion. Though my husband is a deceiver and has committed wicked deeds, please save him. My husband is wicked, evil in intelligence. O Devi! I bow down before you. Please tell me how he can swiftly attain a virtuous end.’ Parvati is affectionate towards her devotees. Hearing her words, with a pleased mind, she spoke to her friend, Chanchula: ‘If your husband hears Shiva’s supreme and sacred account, he will overcome this hardship and attain a virtuous end.’ She lovingly heard these words of Gauri, with aksharas like amrita.
She repeatedly joined her hands in salutation and bent her shoulders down. On hearing about his account, her husband would be cleansed of all sins. Therefore, she prayed that he might obtain a virtuous end. She repeatedly beseeched Shiva’s beloved to ensure this. Maheshi Gauri is affectionate towards her devotees and took pity on her. Hence, she summoned Tumburu, the one who sang about Shiva’s account. The daughter of the mountain affectionately addressed the king of the gandharvas. Girija said, ‘O Tumburu! O one loved by Shiva! O fortunate one! Do what is in my mind. With her, quickly go to Mount Vindhya. There is an extremely terrible and extremely fearful pishacha there. Listen to his account. I will tell you everything. In a former life, this pishacha used to be a Brāhmana named Binduga. That wicked person used to be the husband of this lady, my friend. He was the husband of a vrishali. At the time of sandhya, he did not bathe and perform the other rites of purification. He was angry and foolish in intelligence. He ate what should not be eaten. He hated virtuous people. He took what should not be taken. He was violent and wielded weapons. He ate with his left hand. He oppressed those who were afflicted. He was cruel and set fire to the homes of others. He always associated with chandalas. He was a great deceiver and enjoyed courtesans. The sinner abandoned his own wife and associated with those who were wicked. As a result of that association with a courtesan, he completely destroyed all his good merits. Desiring wealth, without any fear, he made his wife accept paramours. He indulged in this wicked conduct until he died. In the course of time, he died. He went to Yama’s city, the terrible place enjoyed by those who are sinners. The evil-souled one went through many kinds of hell there. Right now, that deceiver has become a pishacha in Mount Vindhya, enjoying wicked things. In front of him attentively narrate the extremely sacred and divine Shiva Purana, which destroys every kind of sin. As soon as he hears the account of the Shiva Purana, his atman will be purified and he will be cleansed of all sins. He will no longer be a preta. Binduga will be freed from his present hardships as a pishacha. After this, follow my command and bring him before Shiva.’ Thus addressed by Maheshani, Tumburu, Indra among the gandharvas, was delighted. He told himself that he was extremely fortunate. Following the command, Tumburu, loved by Narada, ascended an excellent vimana, along with the beloved Chanchula. He went to Mount Vindhya and saw the pishacha there, with a gigantic body and large jaws. He was malformed. Sometimes, he laughed. Sometimes, he wept. Sometimes, he spoke excessively. Tumburu, who sang about Ishana’s excellent account, was extremely strong. He forcibly seized that extremely fearful pishacha and bound him up in nooses.


‘As soon as Binduga hears the account of the Shiva Purana, his atman will be purified and he will be cleansed of all sins. He will no longer be a preta. He will be freed from his present hardships as a pishacha’

Tumburu did this so that he could narrate the Shiva Purana. Having decided this, he made arrangements for great festivities. There was a great uproar in all the worlds. ‘Having been commanded by Devi, Tumburu has gone to Mount Vindhya, so as to make the pishacha listen to Shiva Purana.’ So as to hear, all the devas and rishis hastened and assembled there. All of them went there to lovingly hear about Shiva Purana and it was a wonderful assembly. Bound in nooses, the pishacha was made to sit down. With a lute in his hand, Tumburu started to sing the account about Gauri’s husband. He started with the first samhita and ended with the seventh samhita. [Current texts of the Shiva Purana have seven ‘sahmitas’.] He clearly described the entire Shiva Purana, along with its greatness. Listening lovingly to the Shiva Purana, with its seven samhitas, all the listeners felt that they had accomplished their objectives. Hearing the extremely sacred account of Shiva Purana, the pishacha was cleansed of all his sins and gave up his form as a pishacha. He swiftly assumed a divine form, fair in complexion and attired in white garments. All his limbs were adorned with dazzling ornaments. He resembled the three-eyed Chandrashekhara. Assuming a divine form, along with his own beloved, who already possessed a divine form, he himself sang about the illustrious conduct of Parvati’s husband. All the devas and rishis saw him, along with his wife. They were amazed and were filled with great happiness. Hearing about Mahesha’s extraordinary account, they achieved their objective and were pleased. Praising Shankara’s fame, they returned to their own respective abodes. Binduga, divine in his atman, ascended an excellent vimana. With his beloved by his side, he was stationed in the sky and looked extremely radiant. Singing about Mahesha’s excellent and agreeable qualities, along with his beloved and accompanied by Tumburu, he reached Shankara’s abode. Mahesha and Parvati welcomed Binduga. He was lovingly made a gana and she became Girija’s friend. That world is full of supreme bliss. It is full of radiance and is eternal. He obtained a sparkling residence there and became full of supreme happiness.

Suta concluded, ‘I have thus narrated this sacred itihasa, which destroys sins. It is unblemished and enhances devotion. Shiva and Shivaa [Parvati, written in this way to distinguish from Shiva] take great delight in it. If a person controls himself, listens to this with devotion and chants it, he enjoys extensive objects of pleasure and at the end, he obtains emancipation.’