The Taming of the Earth

The utilitarian aspect of Dharma 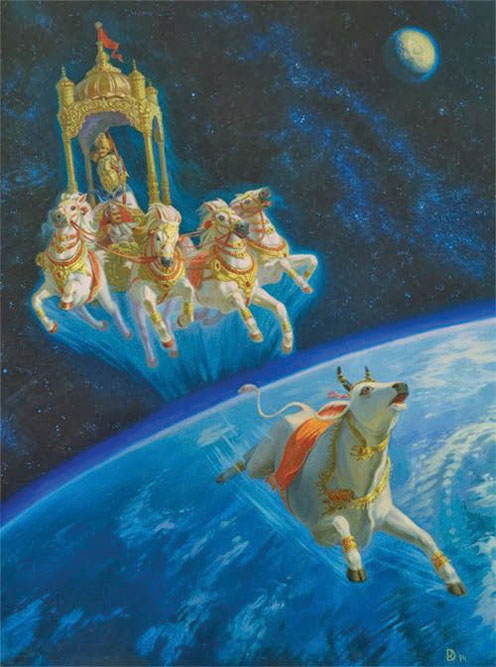 KING ANAMITRA HAD a son named Chakshusha. Chakshusha was wise and remembered his past lives. As a newborn, he lay down on his mother’s lap. His mother, Giribhadra, lovingly embraced him, but Chakshusha burst out laughing. A trifle angry and astounded, his mother wanted to know why he was laughing. Chakshusha said, ‘Mother, look at that female cat. It is waiting for an opportunity to eat me. It is looking at me longingly. You can’t see Jataharini, but I can. That she-demon is also looking at me longingly, waiting to seize me. The cat and Jataharini are both driven by their selfish reasons. Your love is no different. It is also selfish. The female cat and she-demon want their gratification from me immediately. You will want it at some future time. You also want something from me. Besides, who am I? You hardly know me. I have been born five or seven days ago. Yet, you are lovingly addressing me as your son.’ At this, his mother was disgusted and left him. Seizing the opportunity, Jataharini grabbed him. The she-demon is so named because she is the one who abducts (harini) newborns (jata). Jataharini was mischievous. There was another king named Vikranta. He too had just had a son. Jataharini placed Chakshusha on the bed in King Vikranta’s palace and took his son away and placed him in someone else’s house. That is what Jataharini always does: cause confusion by exchanging newborns. In the process, she always eats the third one. (This tells us that the infant mortality rate was 333 per thousand.)

There are several samskaras (sacraments) we go through as we progress in life. Samskara is an act of cleansing and purification, undergone at every threshold in life, as we transcend one phase of life and move into another. The number of samskaras is usually given as 16, though the list often varies from one text to another. King Vikranta performed all the required samskaras for the one he took to be his son. One of these samskaras is known as naamkarana, when the child gets a name. King Vikranta gave him the name Ananda. A subsequent samskara is upanayana, when the boy is invested with the sacred thread. After the upanayana ceremony was over, Ananda’s guru told him, ‘Go and prostrate yourself before your mother first.’ Ananda burst out laughing. ‘Which mother shall I go and prostrate myself before? The one who gave birth to me, or the one who reared me?’ ‘What do you mean?’ exclaimed the guru. ‘Your mother is Haimini, King Vikranta’s wife. Haimini is Jarutha’s daughter and she married King Vikranta. Who else can be your mother?’ ‘Certainly not,’ replied Ananda. ‘I am King Anamitra’s son and Haimini is not my mother. Haimini’s son is Chaitra. Chaitra lives in Vishalagrama and has been brought up as the son of the Brahmana Agravadha. Go and fetch King Vikranta’s real son from Vishalagrama. Who is whose son? Who is whose father? In this life itself, I have had two fathers and two mothers. Across lives, I have had many fathers and many mothers. Father, mother, son—all these notions begin with birth and end with death. They aren’t eternal. I am not interested in all this. I am going off to the forest to engage in austerities.’ In the last column, I stressed the point that dharma is individual-specific. Just because in a given situation one person takes a certain decision, this doesn’t mean that another person in that same situation will take exactly that same decision.

Ananda stressed that Chaitra should be brought. Even if he had known the truth, he needn’t have. Upanayana isn’t quite the point. Eventually, there would have been other sacraments, leading to Ananda becoming the heir to King Vikranta. Despite knowing the truth, there would have been others who would have happily assumed that role. Had he not wanted to do so, Ananda needn’t have gone off to the forest to perform austerities. He could have returned to King Anamitra’s house. What about Chaitra? Having been brought up as a Brahmana, should he have agreed to become King Vikranta’s heir? There are issues of conflict of dharma. The matter didn’t end there. Ananda went off to perform austerities, but Brahma came and interrupted him. ‘How can you devote yourself to austerities?’ asked Brahma. ‘Your path is that of action. You don’t have the right to seek moksha [emancipation]. You will be the sixth Manu.’ In every kalpa (era), there are 14 Manus. Each Manu presides over a duration of time known as manvantara. We are now in the seventh manvantara and the Manu is Vaivasvata Manu (the one referred to in the preceding column). Chakshusa Manu was the sixth Manu. But I should explain why he was known as Chakshusha. In his previous birth, he was born from Brahma’s eye. Since the word for eye is chakshu, he came to be known as Chakshusha.
There are alternative stories about how he came by that name too. What I have just told you is from the Markandeya Purana. The Hari Vamsha tells us that Ripu, Dhruva’s grandson, had a wife named Brihati. Their son was Chakshusha. This is Chakshusha, as in the father. The Manu we have been speaking of is Chaakshusha, as in the son. Pushkarini was Virana’s daughter and she married Chakshusha, the father. Chakshusha and Pushkarini had a son named Chaakshusha, the Manu we have in mind.
The names and lines of descent differ a bit in the Vishnu Purana and the Matsya Purana.

In the lineage of Chakshusha Manu, we have the story of Vena. There was a king named Anga and he was married to Sunitha, the daughter of Mrityu/Kala. Mrityu/Kala means the personified form of Death and Death is evil and wicked. Anga and Sunitha had a son named Vena. From childhood, Vena associated with his maternal grandfather, Mrityu/Kala, who was wicked. Therefore, Vena also turned out to be wicked, devoted to adharma, rather than dharma. He promulgated a rule that there should be no sacrifices and no oblations. ‘I am the one who should be worshipped through sacrifices. I am the sacrifice and the one who sacrifices. The oblations offered at sacrifices are meant for me.’ He transgressed all the ordinances and appropriated everything for himself. Dharma suffered and the subjects suffered. As a king, Vena’s dharma was to protect dharma and protect the subjects. The rishis tried to dissuade him, but he laughed at them. ‘Who other than me is the creator of dharma? Who other than me should be listened to?’ It is the dharma of rishis to get rid of a bad and oppressive king. Therefore, using their powers, the rishis killed Vena. But there was a problem. Vena didn’t have any sons. There was no one who could be a king. In the absence of a king, there would be anarchy in the kingdom. The wicked would go unpunished and the virtuous would no longer be protected. It was the dharma of the rishis to find a king who could rule.

The rishis started to knead the corpse. As they kneaded, the sin inside Vena emerged in the form of various undesirable species. They kneaded Vena’s right arm, as if it were a piece of wood used to kindle a fire. Prithu arose from this. The word ‘prithu’ means thick. Since the right arm was thick, Prithu came to be known by that name. The evil and sin had been drained out of Vena’s body. In addition, Vena had given birth to a virtuous son. There is a hell known as put and a son is known as putra because he saves (trayate) from the hell known as put. Thus, Vena was saved from hell and, despite his misdeeds, went straight to heaven. Prithu was a wonderful king. He was the first universal emperor, known as chakravarti. A chakravarti is someone whose wheel (the wheel of the chariot) travels unimpeded everywhere on earth. Prithu levelled out the earth, created cities and agricultural fields. He was the person who started agriculture and animal husbandry. Before that, subjects didn’t have means of subsistence. When the subjects requested Prithu to find means of subsistence for them, he rushed after the earth with a bow and arrow. As she fled, the earth said, ‘You should not see any dharma in killing a woman. Without me, how will you be able to sustain the subjects?’ Prithu replied, ‘In this world, if a person kills many beings for the sake of a single entity, whether that single entity is he himself or someone else, he commits a sin. However, for the happiness of many, if a single entity is killed, then one does not commit a major sin or a minor one.’ Each to his/her own dharma. However, the earth didn’t have to be destroyed. She came under Prithu’s subjugation and agreed to be his daughter. That’s the reason she is known as Prithvi or Prithivi.