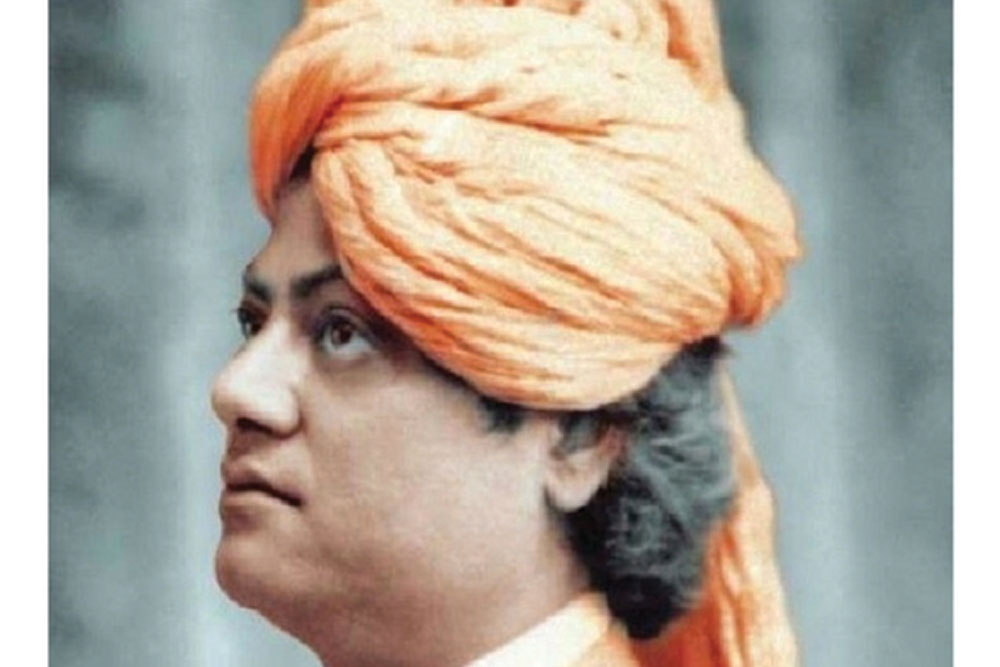 Swami Vivekananda and Sister Nivedita, master and disciple, re­turned to Srinagar on August 8th, 1898, after their unforgettable Amarnath yatra. The experience had been momentous, albeit in different ways for each of them. Unfortunately, the Swami’s exertions had exhausted and weakened him.

As Nivedita put it in her posthumously published Notes of Some Wanderings with the Swami Vivekananda (Calcutta: Udbod­han, 1913): ‘To him, the heavens had opened. He had touched the feet of Shiva. He had had to hold himself tight, he said afterwards, lest he “should swoon away.” But so great was his physical exhaustion that a doctor said afterwards that his heart ought to have stopped beating, but had undergone a permanent enlarge­ment instead’ (pp 149-150).

But Vivekananda’s mood changed after his return.

He was much more aloof and preoccupied. His focus shifted from Shiva to Kali. Singing the songs of his guru, Sri Ramakri­sha’s favourite poet, Ramprasad, his customary expression was ‘Well, well! Mother knows best!’ especially when ‘some cher­ished intention had to be abandoned’ (The Master as I Saw Him, London: Longmans, Green & Co, 1920, p 163).

In September 1898, his plan of starting a college and math in Srinagar was finally abandoned because of the British resident’s disapproval. Vivekananda ‘complained bitterly of the malady of thought, which would consume a man, leaving him no time for sleep or rest’ and strove to instil the ‘ideal of rising beyond the pairs of opposites, beyond pain and pleasure, good and evil alike’ (ibid).

As a consequence, Vivekananda began ‘to fasten his whole at­tention on the dark, the painful, and the inscrutable… to reach by this particular road the One Behind Phenomena’ (Master, p 164). Vivekananda diverted his devotions to Kali, ‘the worship of the Terrible… She is the organ. She is the pain. And She is the Giver of pain, Kali! Kali! Kali!’ (ibid).

It was during this delirium of imagination and realisation that he composed what became possibly his most celebrated poem:

‘writing in a fever of inspiration, he had fallen on the floor, when he had finished… exhausted with his own intensity’ (ibid).

The stars are blotted out,
The clouds are covering clouds,
It is darkness vibrant, sonant.
In the roaring, whirling wind
Are the souls of a million lunatics
Just loose from the prison-house,
Wrenching trees by the roots,
Sweeping all from the path.
The sea has joined the fray,
And swirls up mountain-waves,
To reach the pitchy sky.
The flash of lurid light
Reveals on every side
A thousand, thousand shades
Of Death begrimed and black—
Scattering plagues and sorrows,
Dancing mad with joy,
Come, Mother, come!
For Terror is Thy name,
Death is in Thy breath,
And every shaking step
Destroys a world for e’er.
Thou “Time”, the All-Destroyer!
Come, O Mother, come!
Who dares misery love,
And hug the form of Death,
Dance in Destruction’s dance,
To him the Mother comes.

Vivekananda’s Eastern and Western disciples speculate on the intense inner kindling that occasioned the composi­tion: ‘Was this what the Yogis speak of as the awakening of the Kulakundalini? Outside it was all stillness; but within him a world-destroying tempest raged’.

Nivedita understood a profound and important lesson, recog­nising ‘the underlying egoism of worship that is devoted to the kind God, to Providence, the consoling Divinity’ (Master, p 209). What we call the Divine is not just kind, merciful and benign; it is also cruel, pitiless and malignant. We cannot want only the beneficial side of it while not accepting the destructive aspect.

Everything that is is Divine—the good, the bad and the ugly. Worshipping only the convenient and considerate deity was nothing but ‘shop-keeping’. For ‘God in the earthquake, or God in the volcano’ is also God (ibid). Radical freedom, for Vivekananda, was given only to one who would not hesitate ‘to hurl oneself upon the sword’s point, to become one with the Terrible for evermore!’ (Master, p 210).

The Swami, spending more and more time by himself, suddenly left for Kshir Bhavani alone on September 30th. He stayed there for a week, worshipping Kashmir’s foundational Goddess, Ma­harajni, with its coloured spring. Like most of the great temples in the land, this one was also destroyed and razed to the ground after Kashmir was con­quered by Muslim invaders. While worship­ping her, Vivekananda thought: ‘Mother Bhavani has been manifesting Her Presence here for untold years. The Mohammedans came and destroyed her temple, yet the people of the place did nothing to protect Her. Alas, if I were then living I could never have borne it silently’.

When he was thinking thus, his mind overwhelmed with anguish and anger, it seemed as if he heard the Mother’s voice reply: ‘It was according to My desire that the Mohammedans destroyed this temple. It is My desire that I should live in a dilapi­dated temple, otherwise, can I not immediately erect a seven-storeyed temple of gold here if I like? What can you do? Shall I protect you or shall you protect me!’ (ibid).

As Swamiji reported to his disciple Sharat Chandra Chakra­varty, ‘Since hearing that divine voice, I cherish no more plans. The idea of building Maths etc. I have given up; as Mother wills, so it will be’ (ibid).

Chakravarty decides to test his master, ‘Sir, you used to say that Divine Voices are the echo of our inward thoughts and feel­ings’ (ibid). Vivekananda disabused him of any doubts regarding the experience, ‘Whether it be internal or external, if you actually hear with your ears such a disembodied voice, as I have done, can you deny it and call it false? Divine Voices are actually heard, just as you and I are talking’ (ibid). Vivekananda, who had been so troubled by the destruction of the temple, did not live to see its rebuilding by Maharaja Pratap Singh in 1912. Today, the restored and heavily guarded temple is visited by thousands.

Returning to Srinagar on October 6th, 1898, Vivekananda honoured his guests with the marigolds that had been offered to the Mother. Sitting down, he said, ‘No more “Hari Om!” It is all “Mother” now!… All my patriotism is gone. Everything is gone. Now it’s only “Mother, Mother!”’ (Master, p 167).

Nivedita then narrates the Kshir Bhavani realisation in a manner quite similar to Chakravarty, ‘I have been very wrong… Mother said to me “What, even if unbelievers should enter My temples, and defile My images! What is that to you? Do you protect ME? Or do I protect you?’ (Master, p 168).

From being a staunch Advaitin, Vivekananda was much more like his own Master, Sri Ramakrishna, a guileless and fully surrendered devotee of the Mother. Perhaps, he had also realised just three and a half years short of his own death that Brahman and Kali were one and the same, two aspects of the ultimate real­ity and supreme consciousness. So in the ‘Mother mood’ was Vi­vekananda that he worshipped that he offered worship to Urna, the little daughter of his Muslim boatman.

After Kshir Bhavani, Vivekananda seemed conscious of the Divine Mother everywhere and in all things: ‘Wherever he turned he was conscious of the Presence of the Mother, as if She were a person in the room’. He remarked: ‘Swamiji’ was dead and gone. Who was he that he should feel the urge for teaching the world? It was all fuss and vanity. The Mother had no need of him, but only he of Her. Work, when one had seen this, was nothing but illusion. An overmas­tering love enveloped him. He believed now in nothing but love, love, love—love so intense that it would be impossible for even the vilest enemies to resist it’ (ibid).

It was time to leave Kashmir and the Himalayas, but one more trial awaited Vive­kananda. It is reported that the Swami was cursed by a fakir whose disciple appeared to have shifted loyalties to the Swami. Vivekananda fell sick, with bouts of vomiting and terrible distress.

So disturbed was he that he exclaimed, ‘What good is Shri Ramakrishna to me?—What good are all my realisations and preaching of Vedanta and the omnipotence of the Soul within, when I myself could not save myself from the diabolical powers of a black magician?’ (ibid). Almost as a consolation, he told his fol­lowers, ‘But spiritually, spiritually, I was not bound down!’ (ibid).

A few days after, on October 11th, the party descended once again, via Baramulla, to the plains of northern India for their last leg of site-seeing, which included Lahore, Delhi and Agra, before returning to Calcutta.

From an early realisation of the relationship between the microcosm and the macrocosm, to experience of immortality in Amarnath, to the definitive shift from knowledge and action to devotion and surrender after Kshir Bhavani, the Himalayas inspired and nurtured significant episodes in Vivekananda’s limitless adventure of consciousness.

Vivekananda’s Himalayan experiences are some of the most intense, uplifting and transformative in his life. Yet he never lost sight of the profound truth of Vedanta: ‘From sand rise these mountains; unto sand they go’ (ibid).