The Return of Hardik Pandya 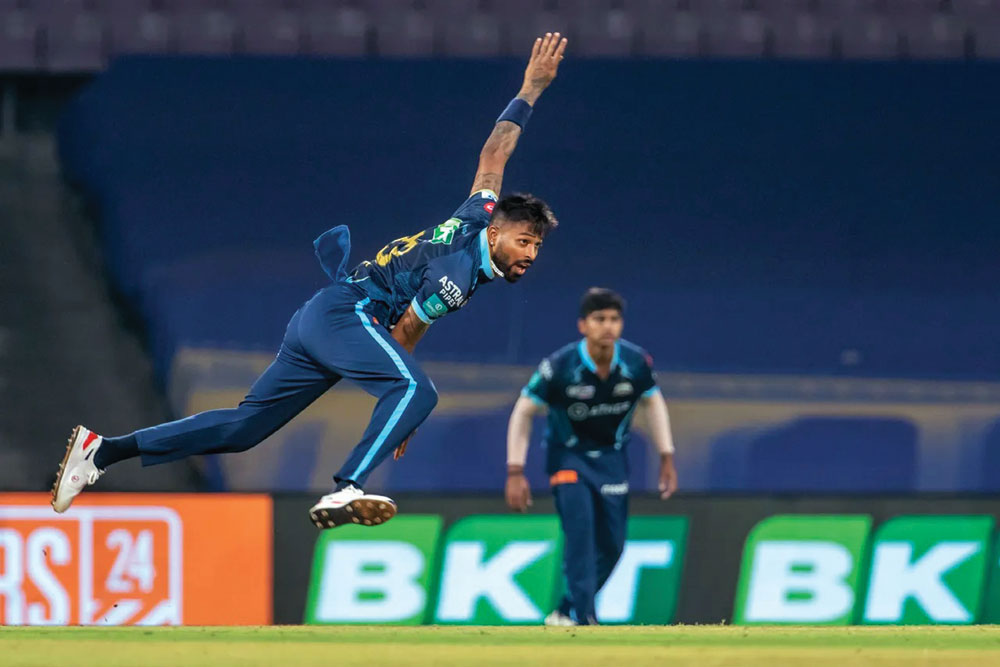 
IT WAS JUST the second over of the innings and Hardik Pandya had the ball in hand in the match between Gujarat Titans and Sunrisers Hyderabad. No, it wasn’t as captain of the Titans. Rather, it was the bowler in Hardik who was marking his run-up against Kane Williamson. It said two things to everyone watching. First, here was a man who was keen on making a mark and one who is battle-ready. Second, Hardik is all about confidence and it was great to see he has not lost any of it despite the long time away from the game. What followed was superb news for Indian fans. Hardik clocked pace touching 140 kmph and was bowling at full tilt. At no point did he feel any discomfort and his opening spell, which had intensity and commitment writ large, was a serious statement of intent from India’s premier all-rounder.

When coach Rahul Dravid pointed out that the team lacked balance with key players missing at Nos 6 and 7 in South Africa in January 2022, it was clear to one and all that he was referring to Hardik Pandya. Having taken an indefinite break, Hardik, currently on a comeback trail, will be key to India’s chances in the World T-20 in Australia. Hardik at full intensity is something the team has been missing for a while. And from what we have seen in the first few games for Gujarat Titans, Hardik the all-rounder is back. Bowling at speeds between 135 and 140 kmph, it is almost the Hardik of old. What I was keen on seeing was if Hardik had dropped pace. Bowling yes, but at what pace? If it was anything less than 130 kmph, it would be a blow for India. It wouldn’t be the Hardik of old and it could be a problem going forward. Not only has Hardik bowled his full quota in the first few games but he has done so at good pace and rhythm. He has looked very impressive with the bat as well, giving fans hope that India’s go-to finisher is back at full fitness.

In a detailed conversation ahead of the Indian Premier League (IPL), Hardik had alluded to the fact that he was keen on bowling. “I have always rushed myself with my preparation keeping the team’s interest in mind but this time I wanted some time off to prepare myself physically and mentally. I also wanted to take some time off for my family. We have spent a lot of time in bio bubbles, though everyone has tried to make us feel comfortable; but staying in a bio bubble is very tough. You spend a lot of time away from your family and that eventually takes a toll on you. I wanted time off to reflect on myself and understand which areas I needed to work on and concentrate on improving those things. I have always worked hard in silence and will continue to do so,” he had said. And he has. He has built up strength and looks to have added muscle during his time away from the game.

Pandya is right. Just like every other human being he has made many mistakes in the past. He has rushed his return post-injury each time; he got himself into trouble with television shows and had a rough ride with the selection committee in October last year. For a 26-27-year-old to deal with stardom isn’t easy. Money, glamour and fame aren’t easy bedfellows and there are many who aren’t ready to deal with them all. Hardik is a classic example. All of a sudden, he had it all. In the course of the last five years, he has become a multi-millionaire with millions looking up to him as a role model. He is the perfect underdog story. Rags to riches. People seek him out for autographs, want to pose for pictures with him and share the same social space with him. He is an Indian national team cricketer, who justly is one in a billion. It is a heady world, which also has its flipsides. You tend to overlook the responsibilities that come with it, you tend to get swept away by the gloss, and it makes you feel that you can get away with it all.


India needs Pandya the all-rounder. Almost every team playing the T-20 World Cup in October has six bowling options and Pandya is critical for India’s balance. In Australia, where medium pacers have fared well, Pandya can be handy in the middle overs. India will be delighted if Hardik is able to bowl his four overs at a good pace

India needs Pandya the all-rounder. Almost every team that will be playing the T-20 World Cup in October has six bowling options and Pandya is critical for India’s balance. In Australia, where medium pacers have fared extremely well, Pandya can be handy in the middle overs and that explains why the Indian management continues to back him. Having seen the likes of Marcus Stoinis do the job for Australia, India will be delighted if Hardik is able to bowl his four overs at a good pace. Not only will it take the pressure off Rohit Sharma, it is also expected to help Pandya the batter. If he makes a contribution with the ball, it is natural that his batting will be less under the scanner.

At this point at least, India does not have a like-for-like replacement for Pandya. Shardul Thakur is more a bowling all-rounder who can bat and isn’t the finisher India is looking for at number six. India needs Hardik to do what he was able to do against Australia in November 2020 and has done for Gujarat Titans in IPL this year. His bowling, may I say, is the real plus. This is because all things change if Hardik isn’t able to bowl. Without the two overs coming from him, his importance in offering balance is substantially reduced and that does open up areas of concern for India. Hardik the batter is not as exciting as Hardik the all-rounder and that’s the key question Rahul Dravid alluded to in South Africa.

This IPL is one of the most important tournaments Hardik is playing in his career. Each time the odds were stacked against him in the past, he managed to come up with a telling performance. Be it in England with a five-wicket haul or in South Africa with a fantastic batting effort or in Australia with back-to-back match-winning performances, he has proved his worth as a genuine all-rounder for India. That’s what has been missing of late and that’s what has resulted in all the talk surrounding him. And that’s exactly why Hardik bowling was such a welcome relief not just for Gujarat Titans fans but also for everyone who follows the game closely in India. It ignited hope that he is ready for the action and will yet again put all the debate to rest.

Hardik was always a clean striker of the ball and had the talent. Now, having regained full fitness, Hardik, it can be conjectured, will soon be back at his absolute best. And if that happens, there is no better news for Indian cricket.