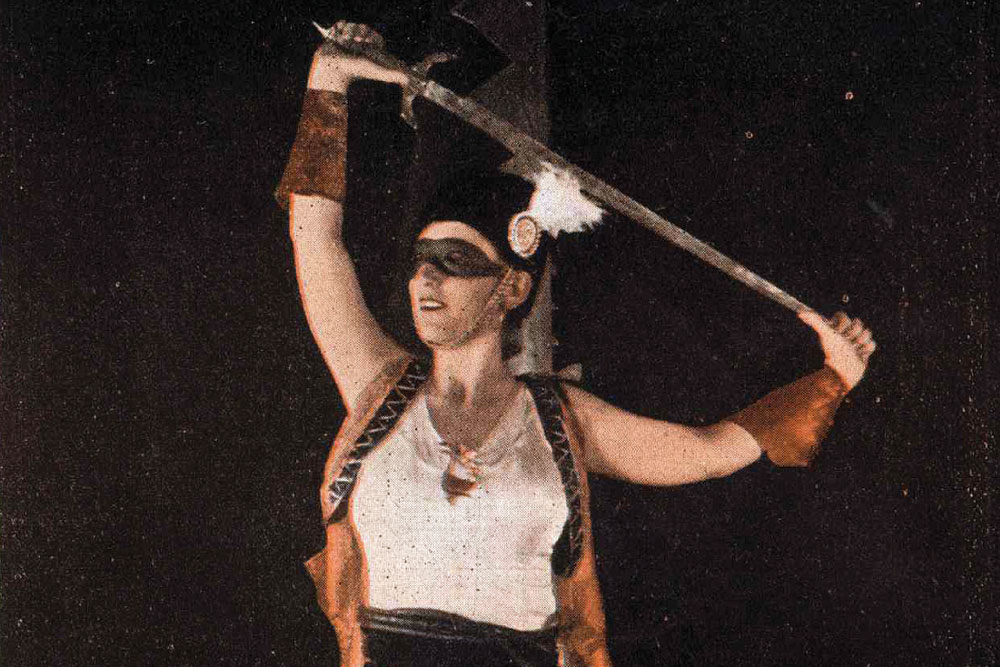 AS I WATCHED Jim Sarbh play the lead role in Rocket Boys, now streaming, I was remind­ed of the time when Parsis were a dominant force in Indian cinema, long before the word “Bollywood” was coined. They were behind the camera as well as in front of it. Dinshaw Bilimoria was the Amitabh Bachchan of the silent films that were made before the arrival of the “talkies” in 1931.

Films of Wadia Movietone began with a logo of a ship with sails. It was honouring the heritage of two Parsi brothers who owned the studio, JBH Wadia and his younger brother, Homi. Their ancestors were ship builders in Surat. In 1817, they built the British warship, HMS Trincomalee. The studio was estab­lished in 1933 in Parel, Bombay (now Mumbai).

Parsis, people of Persian origin who follow the Zoroastrian faith, were in our movie business from the be­ginning. Dinshaw Bilimoria made his debut in 1925 as a lead actor in the historical Chhatrapati Sambhaji and fol­lowed it up with an action film, Wildcat of Bombay, later that year. He was the highest paid actor at that time.

When films with soundtracks were introduced, he be­came part of a popular romantic team with Sulochana. She was Jewish, real name Ruby Myers. His younger brother, Eddie Bilimoria, was also an actor though less successful.

John Cawas was hugely popular playing Tarzan in films in the 1930s. These jungle films gave the producer an excuse to dress women in skimpy clothes. Toofani Tarzan (1937) was one such film. Boman Shroff was also a popular action actor of that time.

Fearless Nadia was the queen at Wadia Movietone. She was invented by the two brothers who owned the studio. She was blue-eyed and blonde, an Australian whose real name was Mary Evans. She was in circus before she joined films. “Fearless” was always part of her screen name.

In her films, she was in tight shorts and high leather boots that drove the front benchers wild. She wore a mask inspired by the Hollywood film Mark of Zorro (1920). Nadia would crack her whip to subdue the bad guys. She could gal­lop on a horse, swing from chandeliers and run atop mov­ing trains in films in pursuit of shifty-eyed villains.

Her films with titles like Hunterwali (1935), Miss Frontier Mail (1936) and Diamond Queen (1940) made her a superstar. The name of Nadia’s horse was “Punjab Ka Beta”. It was smart­er than her male co-stars! Her car, too, had a name, “Roll-Royce Ki Beti”. The first film I saw as a child was Bambaiwali (1941) with Fearless Nadia in the title role. I was smitten.

Nadia’s pronunciation of Hindi dialogue was atrocious. In a scene where the villain drags her, the director of the film gave her very simple lines, “Mujhe chhodo/let me go.” She could not understand why everyone on the set laughed hysterically whenever she uttered those two words.

Most of her films were directed by Homi Wadia. The two were in love, but he could not marry her because of his mother’s objection. She wanted a Parsi bride. They finally married in 1961, late in life, after the mother died.

The Wadia brothers separated in 1941 and sold their studio in Parel to V Shantaram, and it became Rajkamal Kalamandir. But both continued making films with JBH Wadia going upscale. In 1948, he produced Mela with Nargis and Dilip Kumar in the lead. The younger broth­er stayed true to his low-budget roots. He made Arabian Nights fantasies and Hindu mythologicals under the Basant Pictures banner. Meena Kumari acted in several of these films until she hit big time with Baiju Bawra in 1952.

India’s first film with sound was made by Ardeshir Irani, also a Zoroastrian. The film Alam Ara (1931) was a major breakthrough for Indian cinema. Irani’s first choice for fe­male lead was the silent films star, Ruby Myers, but she was unable to speak Hindustani and was replaced by Zubeida, the daughter of the Nawab of Sachin, a state near Surat. Mehboob Khan was to be the hero but the role eventually went to the commercially more viable Master Vithal, a successful actor in silent films.

Mehboob took to direction and 26 years later he made the masterpiece Mother India. Irani died in 1962 at the age of 82. It is a mystery why this pioneer’s contribution to Indian cinema has largely gone unrecognised.

At one time, Sohrab Modi was one of our most ac­claimed filmmakers. The films were several cuts above those of the Gujaratis at Ranjit and Prakash studios and the Maharashtrians at Prabhat and Rajkamal. Only the clever Bengalis at Bombay Talkies and Filmistan gave him a run for his money.


Fearless Nadia was the queen at Wadia Movietone, a studio owned by two Parsi brothers, JBH Wadia and his younger brother, Homi. Nadia was their invention. In her films, she was in tight shorts and high leather boots that drove the front benchers wild. Nadia would crack her whip to subdue the bad guys

Modi started as a film exhibitor in 1913 in Madhya Pradesh going from town to town with his projector and cans of silent films with his brother Keki as partner. Later, he began acting on stage in Parsi plays and did roles in silent films. Keki continued as exhibitor and died in 1972 as the proprietor of Mumbai’s three top cinema halls— New Empire, Strand and Excelsior.

In 1935, Modi produced and directed his first film Khoon Ka Khoon, an adaptation of Hamlet. Naseem, Saira Banu’s mother, made her debut in that film. He found his footing in historical dramas that required grandiose dia­logue. Pukar (1939) was set in the court of Mughal Emperor Jehangir, and Prithvi Vallabh (1943) was based on a period novel by KM Munshi.

Modi will be remembered forever for one of the great films of Indian cinema, Sikandar (1941), in which Prithviraj Kapoor played Alexander the Great and Modi took the role of King Porus who stopped the conqueror’s advance into India. The sets were lavish and the battle scenes spectacular for its time.

In 1953, Modi made India’s first Technicolor film Jhansi Ki Rani that ruined him financially. He had cast his wife, Mehtab, in the lead role. She was past her prime and not up to the role. He made only one good film after that, Mirza Ghalib (1954), but did not stop making films till he died in 1984 at the age of 86.

Veera acted opposite Ashok Kumar in two films, Shikari and Eight Days, both in 1946, with scripts by the famous Urdu writer, Saadat Hasan Manto. She was pretty, but she struggled with diction and did not last long.

Shammi, daughter of an agiary priest, had the lead role in Malhar (1951), a film produced by singer Mukesh with great songs composed by his friend, Roshan. She was more successful afterwards in dozens of supporting roles. She was Nargis’ best friend.

Saraswati Devi had the distinction of being the first female music composer in films. The songs of some of the biggest hits of Bombay Talkies were composed by her—Achhut Kannya (1936), Kangan (1939), Bandhan (1940) and Jhoola (1941). She worked under the handicap that her actors—Ashok Kumar, Devika Rani and Leela Chitnis— barely carried a note, unlike KL Saigal and Kanan Devi at New Theatres.

She kept the tunes simple and still came up with great songs. Her real name was Khorshed Minocher-Homji. She had to change it to avoid the wrath of her parents who objected to her working in films.

In the 1950s, the golden era of Indian cinema, Faredoon Irani, Fali Mistry and Jal Mistry were brilliant cinematog­raphers who made the camera fall in love with Nargis, Madhubala and Nimmi. Others too.

Parsi involvement in films diminished over the years, more rapidly after the film studios in Lahore went to Pakistan, and the Hindu filmmakers there descended on Bombay in droves.

The best known Parsi in films today is Farhan Akhtar. His mother, Honey Irani, was a successful child star in the 1960s, beginning at the age of seven. Her older sister, Daisy, was more popular. She had short, curly hair and was spunky. She could play the role of a boy with ease. Recently, she revealed that she was raped at the age of six by the person who ac­companied her to Madras (now Chennai) for a film shoot.