The aesthetics of Indian politics–X 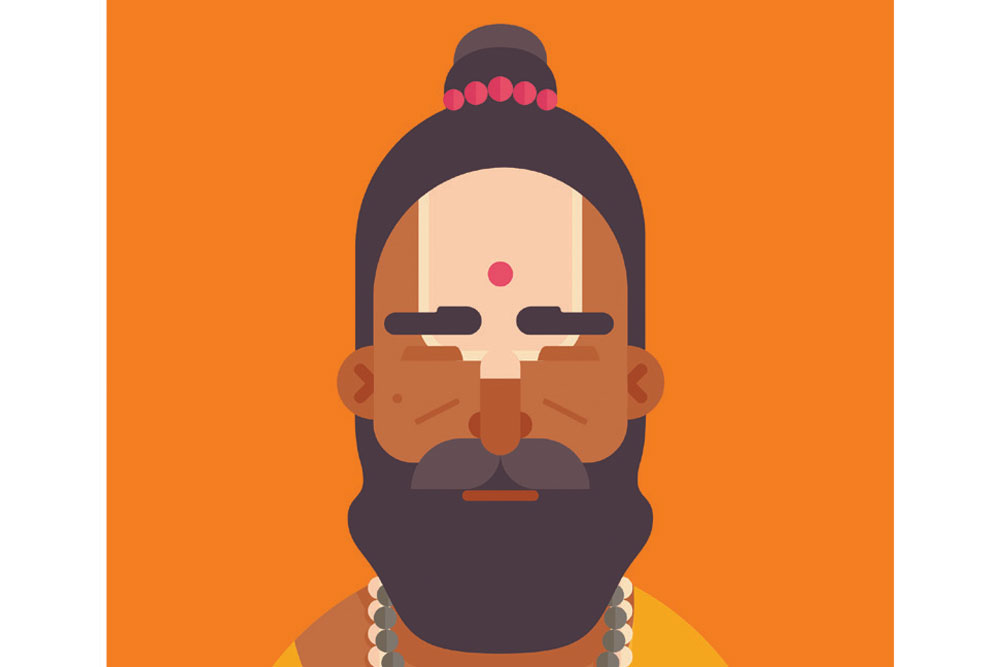 ONE OF THE MANY INTRIGUING PARTICULARS OF Orchha, at least to me, was the mark on the forehead of the priests of the Rama Raja temple. Of the temple and its many secrets, I have already referred to in the previous column (‘Submission Is Strength’, November 22nd, 2021). But the head priest, with his curly halo of hair, was also striking because of his tilak. I could recognise it easily as the urdhva pundra of the Vaishnavas, the U-shaped lines meant to represent the sacred feet of Vishnu.

Each Vaishnava sect has its own distinct marking system to identify it. Some of these marks bear an uncanny resemblance to pictography on Indus-Sarasvati Valley seals found in the British Museum (bit.ly/3cMvCoH). The sign on the Orchha temple priests’ foreheads was in a thick chandan (sandalwood) V shape, with a thinner red vertical line intersecting it. The red line stood for Lakshmi or Sri, which gives the sect its name, Sri Sampradaya or Srivaishavism.

But more to the point, it also resembled the tilakam of the southern Srivaishnavaite sects, both the Thenkalai (southern) and Vadakalai (northern sect), but in different ways. The red centre line was like the former and the thicker yellow or white V-shaped Vishnu’s feet marks like the latter. Did the theology and practices of northern Srivaishnavism also originate in the south, like Chaitanya’s Gaudiya Vaishnavism in the doctrines and traditions of Madhavacharya of Udupi?

Not surprisingly, despite differences in which forms of Vishnu and Lakshmi are regarded as their principal deities, the northern and southern lineages of Sri Vaishnavism have much in common. There is a direct line from Ramanujanacharya to Swami Ramananda. The latter is the root guru of most north Indian bhakti saints and sages, including Kabir, Ravidas, Dadu Dayal and Tulsidas. What is more, Ramanandis were not only egalitarian, but householder or martial. Ramanandi Nagas fiercely fought Ahmad Shah Abdali.

Tulsidas, by writing the authoritative Ramcharitmanas, also codified and popularised the worship of Sita, Rama and Hanuman, ensuring that householder and ascetic devotees of Sri Rama formed the largest single Hindu sect in the great Gangetic belt of India. It was here that the impact of Islamic invasions was most severe, only one proof of which was the demolition of the Ramajanmabhoomi shrine at Ayodhya by Babur’s general, Mir Baqi Tashqandi in 1528.

The entire narrative, never properly told in our history books, acquires added salience with the prospect of a grand Ramjanmabhoomi temple being rebuilt in Ayodhya. A major source for the lives of medieval sants, Nabha Das’ Bhaktamala (c 1585) is practically unknown to most.

WE TEND TO UNDERSTAND THE MASSIVE AND magnificent upsurge of bhakti rasa—devotional fervour and relish—in terms which have become somewhat standard, if not stereotypical. One of these is to see it as an anti-caste movement of social protest. That it was. Sri Ramanuja, the great acharya of Sri Vaishnavism and Visistadvaita, was its unique and early exemplar.

Unfortunately, the current politics is such that his contributions in this department are nearly forgotten while those of other reformers, such as Kabir Das (1398-1440), Ravidas (1450-1540), Guru Nanak (1469-1539), routinely emphasised. This is not the place to go into the reasons behind this neglect. But this socially radical dimension of Ramanuja’s ministry must not be overlooked when we celebrate him as a great philosopher, commentator on the Brahmasutras, the Upanishads and the Bhagavad Gita, and encoder-organiser of a major religious movement.

Appearing almost midway between Sankaracharya (700- 750) and Madhavacharya (1238-1317), he was also somewhat in between the uncompromising non-dualism of the former and, some would say, the equally uncompromising dualism of the latter. Ramanuja lived, it is believed, for a full 120 years, from 1017 to 1137 CE. Among his many achievements was his initiation of hundreds of non-Brahmins into Srivaishnavism.

Though this practice was not unknown or uncommon among the Alwar saints of the Tamil country much prior to him, it was Ramanuja who made it evangelistic. Even the so-called Untouchables, marked by various appalling appellations, were welcomed with dignity into his fold. Long before Mahatma Gandhi coined the term “Harijan”, children of god, Ramanuja called his socially depressed disciples Tirukulattar, descendants of the holy family of Sri or Mahavishnu’s consort Lakshmi herself.

In both Srirangam, Ramanuja’s birthplace and still the epicentre of the faith, as well as Melkote in Karnataka, where he relocated, all castes and communities, including the lowest of the low, were admitted inside the temple. The pancha samskara ceremony of initiation into Sri Vaishnavism was performed by and on Brahmins and non-Brahmins alike. Once admitted into the order, everyone was equal.

Each Srivaishnavite advanced at his or her own pace to ultimate goal, which was moksha or liberation. Unlike Sankara, who believed that jñana or knowledge alone ensured liberation, Ramanuja advocated the method of total surrender, saranagati, to the Lord. Vishnu was not the personal saviour but also identical to the all-pervading absolute Brahman as described in the Vedas and the Upanishads.

Regarding bhakti as merely social reform or protest diminishes, even reduces, its complexity and transformative power. Bhakti was not just protest, it was also prayer, poetics and politics. We have already seen how all these dimensions enabled it to save Hindu civilisation when it was under attack.

In almost every part of India, it was bhakti, regardless of the object of devotion, that was able to rebuild destroyed temples or refashion devotion from temples and icons to poetry and song. What is more, it fashioned and forged new alliances and new communities, some of which, such as Sikhism, later armed themselves to fight the mighty Moghuls. Similarly, in Maharashtra, Shivaji’s Hindavi Svaraj was greatly influenced by Tukaram (1598-1650) and Samartha Ramdas (1608-1681).

Even earlier, the Vijayanagara Empire, established by Harihara (1336-1356) and his brother Bukka (1356-1377), was guided by spiritual preceptors such as Vidyaranya (1296-1391), the 12th Sankaracharya of the Sringeri Math or Sarada Pitham. It is believed that both brothers, who had been converted to Islam by Muhammad bin Tughlaq, returned to Hinduism because of Vidyaranya. We see, thus, that gharwapasi is by no means a modern phenomenon.

This civilisation saving and salvaging dimension of bhakti is often ignored or downplayed in comparison with its social-reformist critique of the caste system and hierarchical Hinduism. At the same time, we cannot ignore the internal divisions and conflicts within what is largely termed Hinduism today. For example, Ramanuja himself, according to his chroniclers, was persecuted by the Chola emperor Kulothunga Chola II.

The Chola kingdom was Shaivaite. Vaishavas were often ill-treated. Ramanuja himself had to leave Srirangam, for Melkote where he reportedly converted the Jain ruler, Bitti Deva, after miraculously curing the latter’s fatally ill daughter. The king took on the new name Vishnuvardhana, also building a grand Vishnu temple to Lord Thirunarayanaswami.

After initial disputes, the Srivaishnavaites and the Jains of Karnataka went on to have excellent relations. This is attested to by inscriptions from that period. One of these is a royal edict which enjoins upon the former to shelter and safeguard the latter: “For as long as the sun and moon endure, the Vaishnavas will continue to protect the Jains. Tatayya of Tirumala, will, out of the money levied from every Jain house throughout the kingdom, appoint twenty servants as bodyguards for the God at Belagola and repair ruined Jina temples. He who transgresses this decree shall be a traitor to the king, a traitor to the sangha and the samudaya.”

The inscription is found in three Jain localities in Karnataka. What is more, it begins with high praise for Ramanuja as “the king among ascetics”. Belagola, of course, refers to Sravana Belagola, where the huge Jain monolithic statue of Bahubali still stands.

WE MUST NOT FORGET THAT the great bhakts or saint-devotees were also significant poets, often both in Sanskrit and the vernaculars. The Alvars of the South composed the Divya Prabandhams, or what came to be known as the Tamil Veda. When both were equally revered, where was the question of a backlash against Sanskrit? The latter, clearly, belongs to modern times, as does the allegedly colonial and missionary-instigated Dravidian movement.

In the medieval ages both the politics and poetics of bhakti were quite different from the identity politics of present times. Anandavardhana, the Kashmiri Saivaite philosopher-aesthetician, established rasa or savour as the basis of all poetry, thus broadening its scope from the dramatic arts as in Bharata’s Natyasastra. What is more, as Edwin Gerow observes in Indian Poetics, “rasa is in all language universally, and not merely in terms of the speaker’s intention or the hearer’s wit” (A History of Indian Literature edited by Jan Gonda, Volume V, Wiesbaden: Otto Harrassowitz, 1977, page 254).

This was nothing short of a revolution, both in poetics and politics. Just the name of the lord, one single word, “Rama”, could now sustain not only devotional fervour. It could also guarantee fearlessness, safety, salvation. But, above all, so sweet was the lord’s name that it produced the sacred relish of bhakti rasa, the death-defying elixir of spiritual and poetic bliss.