Why China will lose its war with Covid 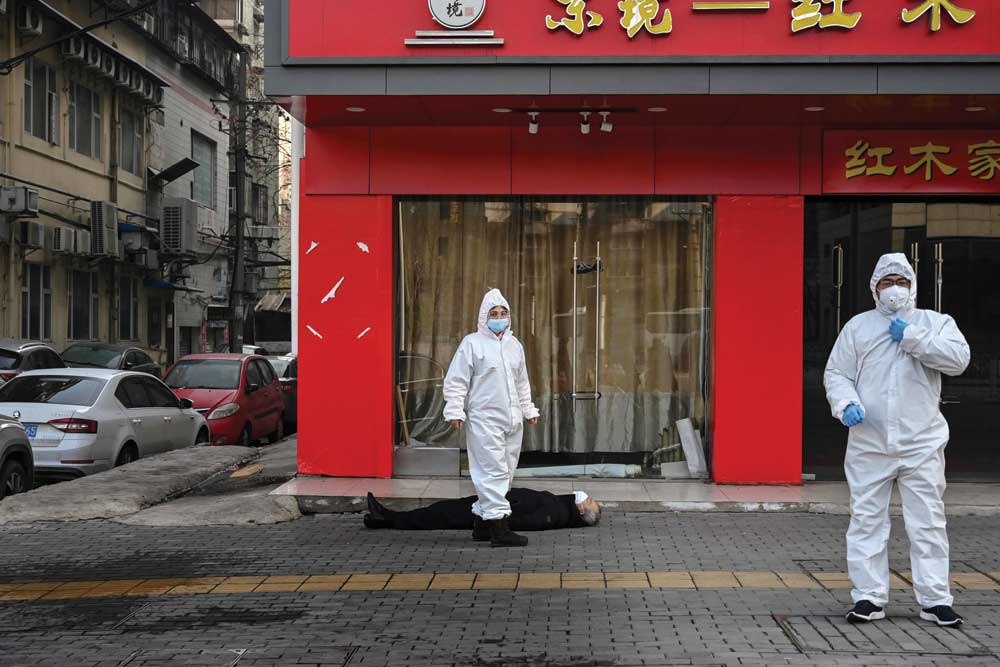 Health officials check on an elderly man who collapsed and died of Covid-19 on a street in Wuhan on January 30, 2020 (Photo: Getty Images)


WHAT IS HAPPENING in Chi­na’s losing war with Covid is a fine illustration of the hubris of man, which is most amplified in totalitar­ian societies ruled by dictators where with every layer of absolutism, the idea of certainty and failure dwindles increasingly less until, despite the evidence staring in the face, they march on as if nothing has happened. Cases are at their peak since the pan­demic began and the news agency AFP reported this week: “China recorded a total of 31,444 domestic cases Wednes­day, of which 27,517 were asymptom­atic, the National Health Bureau said.” Consider also this report by Bloom­berg on Thursday: “Zhengzhou, home to Apple Inc.’s largest iPhone manu­facturing site, will be largely locked down for five days as officials in the Chinese city resort to tighter curbs to quell a swelling Covid-19 outbreak. Mobility controls—a euphemism for lockdown—will be imposed in the main urban areas of Zhengzhou from Friday through November 29 because of rising virus cases, Zhengzhou’s pan­demic task force said in a statement late Wednesday.”

The rest of the world is over the pan­demic precisely because it had already lost. It wasn’t vaccines or lockdowns, but the total victory of the virus in in­fecting everyone that led to this. China, in the beginning, was a magnificent symbol of success because its lock­downs are near-perfect. As a result, the Chinese population, much of the 1.4 billion of them, are Covid virgins and, with each iteration, the virus has learnt how to spread faster, so all of China is now like tinder before a mutated forest fire. It, therefore, scrambles in a panic now and, even so, relies more on the same tactics that brought them to this pass. Its lockdowns will be success­ful but all that it will do is prolong the suffering.

Where it stands now could still become a victory if they had humility. The case could be made that because of its extreme stand, it managed to stave off Alpha and Delta and those were the two killer waves. They saved lives when no one else could. Omicron is mild and about as dangerous as your average viral fever. All that has to be done is to admit that there is no permanent escape and live with Omicron. Xi Jinping can claim that this was the grand plan all along; to wait until it became harmless. But this is where hubris comes into play. China will not do that because it believes that it has to win against Covid, and admission of failure is a sign of weakness. The economy can go to the dogs or the population live in perpetual fear, so long as the state does not admit defeat, the authority of the party and its leader will remain untarnished, and in the end that is the only thing that matters. But nature is crafty. It will not make an exception and the more China locks itself down, the more loopholes the virus will find. It is in no hurry. It will keep returning until the Great Wall collapses.