In the evolving power dynamics worldwide, India must return to Asian centrality and non-alignment 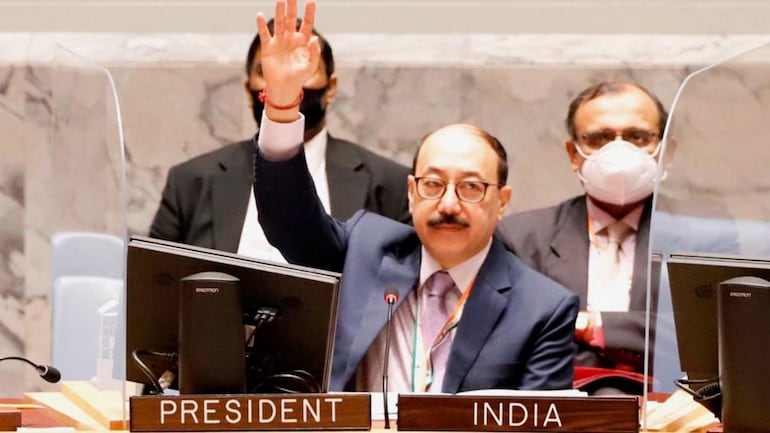 
The UK Prime Minister Boris Johnson is a witty, genial, and colourful person. In the US, recently, to attend the 76th session of the UN General Assembly (UNGA), Johnson cheekily told his bête noire in Paris, President Emmanuel Macron, to “donnez-moi un break” and “prenez un grip”. The two French phrases mean “give me a break” and “get a grip”, respectively. Johnson’s comments went viral on the British and Western media and social media circuits.

Most analysts took those comments as a light-hearted riposte typical of the British prime minister, who is well known for his pun and fun. On the contrary, when US President Joe Biden told the General Assembly on its opening day that he is “not seeking—I’ll say it again—we are not seeking a new Cold War,” the same analysts took it too seriously.

But the events that unfolded during the recently concluded UNGA indicate that the reality is just the opposite. It is Johnson’s “give me a break” comment that needs to be taken more seriously than Biden’s “no Cold War” statement. If anything, Biden’s UNGA address was a categorical assertion that daggers and battlelines were being drawn. America is preparing for a break from its traditional Trans-Atlanticism and NATO-centric security activism in Europe and is turning the focus on the Indo-Pacific.

Biden had earned a reputation for dovishness on Afghanistan as vice president in the Obama administration. He was said to have forced Obama in 2010 to announce a withdrawal from that country when General Stanley A McChrystal, who was sent by Obama to assess the war situation, recommended on the contrary for infusion of another 80,000 American soldiers into the battlefield. A declassified letter, that Osama bin Laden was said to have written to one of his operatives in 2010, states that if Biden became the president, he would “lead the US into a crisis.”

This reputation of Biden was further fortified after the disastrous Afghanistan withdrawal fiasco. Hence, Biden’s statements like “new chapter” and “America is back”, or his comments over the human and women’s rights situation in Afghanistan were taken as mere hyperbole by many. However, the UNGA address that he delivered signals new and revised thinking in the American administration about its foreign policy objectives.

The shift in the global power balance and increasing irrelevance of Europe was first appreciated by President Obama in 2012 when he started talking about the “Asian Pivot”. The conspicuous reticence of important European powers to openly take on China and NATO’s inability to act against Russia during the Ukrainian crisis convinced the American strategic community about the need to shift attention elsewhere. Trump was blunter when he brashly ran down leaders like Germany’s Angela Merkel and Macron and practically washed his hands off the European theatre. If the Biden administration thought it prudent to cold shoulder its traditional European allies and display unilateralism in Afghanistan-related matters in the last couple of years, including holding talks with the Taliban and withdrawal from that country towards the end of August this year, or its lack of remorse in keeping a major ally like France in complete darkness while clinching the critical AUKUS defence deal with the UK and Australia, the subtext appears to be that it cares less for what the European capitals feel.

On their part, the Europeans too didn’t help convince the American leadership that they share its strategic vision on China. The European Commission was more than eager to build bridges with Beijing. From Brussels to Budapest to Rome, leaders were vying with each other for trade and economic deals with Beijing, and even Macron started talking about “strategic autonomy”. Also, with Merkel going and Macron on his way out, there are no towering personalities in Europe anymore for America to depend on.

Central Asia and Middle East, too, have drifted towards China in the last two decades. Central Asia, which came under the US influence briefly during its war on terror in the immediate aftermath of 9/11, returned to its traditional patrons Russia and China. Iran’s intimate relationship with China and the way the American sanctions were bypassed by China to help that country were well known to the American leadership. Their trusted ally Saudi Arabia, too, has moved closer to China after the late King Abdullah introduced the “Itijah Sharqan/Eastward Pivot” policy in 2006 and made a maiden visit to Beijing. Incidentally, that was his first-ever visit out of Saudi Arabia to any country. ARAMCO, the palace-sponsored petroleum giant of Saudi Arabia, is soon going to have major investments from Chinese oil companies, thus firmly placing the two countries in a tight embrace. The two countries have developed strong bilateral defence ties too. Under these circumstances, Biden’s decision to give up attention on Eurasia and focus on the Indo-Pacific is understandable.

If the speeches of Biden and Xi at the UNGA are any indication, the two countries are clearly heading for a major showdown in the Indo-Pacific. Theoretically speaking, while Biden used democracy and human rights as the sticks to beat China with, Xi pooh-poohed the democracy argument and insisted that China stands for human rights through development. Both vied for influence in the UN, something that the US was seen losing under Trump.

In his UN address, Biden described the next 10 years as a “decisive decade for our world” that will determine the global community’s future. Although he talked about ending the “era of endless war” and opening the “era of endless diplomacy,” he also promised to “compete vigorously” with the world’s “autocracies.” He promised to focus attention on the Indo-Pacific and devote resources to the “challenges that hold the key to our collective future.”

The new military alliance between the US, UK, and Australia, which goes by the acronym AUKUS, should be seen in this context. With the formation of the AUKUS, the Indo-Pacific has turned into a smorgasbord of competing alliances. There is already a Quad arrangement of the US, Japan, Australia, and India. The Five Eyes intelligence alliance has the Anglophone countries of Canada, the US, UK, Australia and New Zealand as members. The Trans-Pacific Partnership, too, is not fully dead. There are other regional defence relationships too.

But AUKUS is significant because it fits into the description of the Asian NATO. The reticence of countries like India and Japan to upgrade the Quad into a full-scale military alliance must have prompted Biden to turn to more dependable allies in the Anglophone world. The urgency shown in forming the AUKUS military alliance indicates that the Biden administration is anticipating escalation of conflict in the Indo-Pacific theatre. The outgoing chief of the US Indo-Pacific Command Phillip Davidson had said last year that China would take not more than six years to invade Taiwan. In the event of a conflict in the Taiwan Straits, with Okinawa base near Japan becoming a “wasted asset” due to the extended range of Chinese missile capability, the US needs Australia as a base. Australia is upgrading its naval facilities in the South rapidly. Incidentally, there is chatter in the Australian media circles over an impending war with China.

India stands at the intersection of the two battleground regions—Eurasia and the Indo-Pacific. It faces serious strategic and security challenges from Eurasia, while its dependence on the Indo-Pacific for trade is also humungous.

US’ hasty withdrawal from Afghanistan has left that country in the hands of the forces inimical to India. The Resolution 2593 led by India’s Foreign Secretary Harsh Shringla as the presiding chair of the UN Security Council last month, has highlighted India’s concerns in this regard and demanded that the “Afghan territory not be used to threaten or attack any country or to shelter or train terrorists, or to plan or to finance terrorist acts, and reiterates the importance of combating terrorism in Afghanistan, including those individuals and entities designated pursuant to resolution 1267 (1999), and notes the Taliban’s relevant commitments.”

Terrorism remains India’s major security concern and it should continue to exert pressure on international agencies to act firmly against its sponsors and perpetrators. However, India may well realise that it is as much important to harp on it at the SCO or BRICS as at the UN or its affiliated bodies. America’s ability to influence, much less curb, terror infrastructure in Pakistan and Afghanistan, is waning. At the same time, the terror outfits in the Af-Pak region are perceived as a serious threat by Beijing and Moscow too. The ISIS had long ago declared its intention to champion the cause of the Uighurs of Xinxiang, while China has been able to barely buy the silence of other groups like al-Qaida through allurements.

India is a dependable friend for America in the region. It needs India on its side to manage the Indo-Pacific neighbourhood. Countries in the region like Singapore, which traditionally maintained balance in regional affairs, are coming under intense pressure of the unfolding new Cold War. India has always stood by the ASEAN publicly acknowledging its centrality to the Indo-Pacific. It needs to continue to play that constructive role.

In the evolving power dynamics in the region, India needs to significantly revise its security strategy. It has to quickly return to the twin basics of its foreign policy as proclaimed at the time of its Independence—Asian centrality and non-alignment or strategic autonomy. For India to play a constructive role in the emerging Cold War in the Indo-Pacific, it must pay greater focus on its neighbourhood while religiously adhering to its policy of strategic autonomy.