Pullela Gopichand on his admiration for Sourav Ganguly 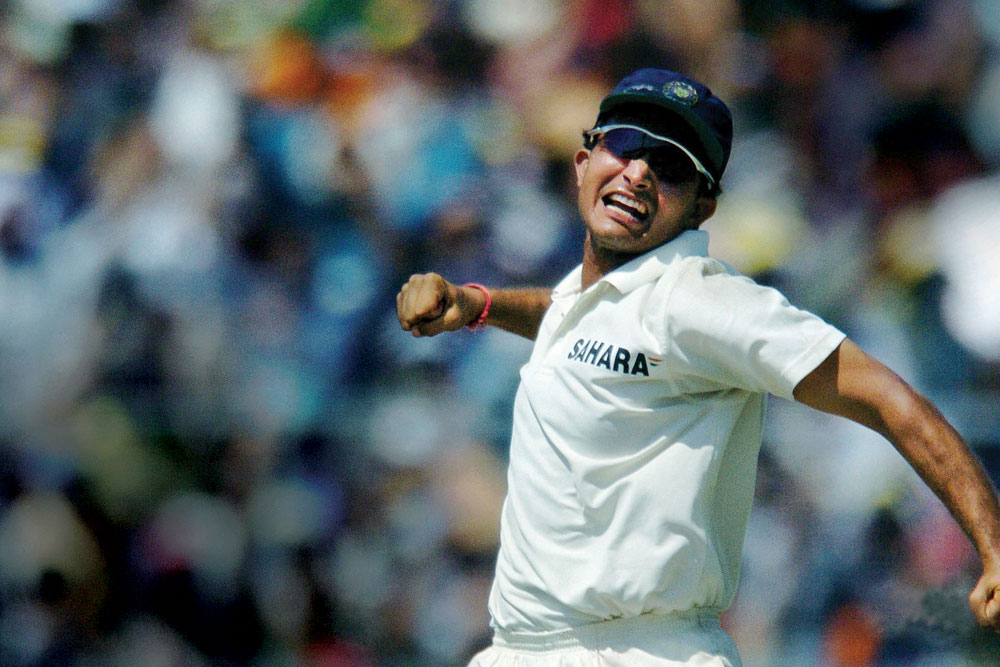 Sourav Ganguly celebrates the fall of a Pakistan wicket at the Eden Gardens in Kolkata, March 20, 2005 (Photo: AFP)


AS SOURAV GANGULY turns 50 on July 8, 2022, it was interesting to hear what anoth­er Indian sporting legend, Pullela Gopichand, had to say about the man. The reason I want­ed to speak to Gopi was because he belongs to a different sport, is of the same generation, and is also an adminis­trator trying to create a system that produces champions. More importantly, he always has a very different perspec­tive than most and could help analyse Sourav in a manner few would be able to.

Sourav is an icon hailed across India and worldwide. As captain, he had transformed Indian cricket and now he is the face of the Board of Control for Cricket in India (BCCI), which inspires many like me to take to admin­istration. So, I must say, for me too, he is someone I have learnt a lot from and will continue to look up to. Is Sourav perfect as an administrator? Let’s be candid. No one can ever be perfect when in a position of power. The easi­est thing to say about a person in power is that he or she could have done better. The establishment is the easi­est target and the more you criticise, the more brownie points you earn. All you need to do is look at the success of Indian cricket, on and off the field in the last few years, and you have your answer.

You won the All England Open Badminton Championships in 2001 and Sourav won the NatWest in 2002 when the shirt incident happened at Lord’s. It was more as if both of you were storming the bastion and scripting nationalist tales on English soil.

We indeed were. When I went to the All England, I have to say I felt there was an undercurrent of racism. Umpires, organisers, administrators…you could just sense it. Calls would go against you and not much could be done about it. It was something that was par for the course. As a re­sult, I was always extra-motivated to beat the British and do well in the All England. I used to tell myself that I couldn’t lose against them. You can call it childish now but that was the case then. A kind of nationalism I was wearing on my sleeve. For Sourav, and with Sourav, I could see the same. What was the shirt opening all about for me? It was Sourav giving it back. Saying something we all wanted to say. He was the representative of modern India doing something to address an issue going on for ages. I have to tell you, I felt very good seeing him do so and it was always a kind of iconic moment. Many feel it was over the top. Kind of embarrassing. But deep down, if you were an Indian, you had a sense it was right. You kind of enjoyed it. Tell me: How many athletes could have done that? How many could even have thought it was possible to do so at Lord’s? That’s where Sourav was different and that’s why it will forever remain an iconic moment for Indian sport.

It’s interesting you say that, for Sourav is kind of embarrassed each time we bring it up.

As I said, you can call it childish now but back then it was important to me and I am sure to him as well. These are emotions that define us. You can’t hide them. I did not during the All England. He did not during NatWest. Now things are different but then it was another story. When we were growing up as athletes, you needed to do well in England against the English to prove a point. For me, I needed to win the All England. For Sourav, he had to do well at Lord’s. And then you do things that come natural­ly to you. If the English can do things and get away with them, why not us? You know what I mean.


There is another similarity. He is an administrator and so are you. You are the vice president of the Badminton Association of India (BAI). Legends turning to administration is good for sport.

Absolutely true. In fact, I can say I have followed him as an administrator and tried to learn from him. It is important we keep making the sport robust and the way to do so is to improve governance. That’s what I am trying to do and that’s where he remains important. I will always try and follow good examples before me and he is one. In India, we needed structures. For the longest time we did not have systems in place. Having played sport, you know there is a huge potential and if you are able to create systems like BCCI has, for example, with the Indian Premier League (IPL), you know the supply line is second to none. That’s what you want to learn as an administrator and implement in your own sport. You want to make your country a sporting nation and we are both invested in it.

Would you ever want to see Sourav as coach? I know he is president of BCCI, but his heart is still very much set on the field of play. He is a cricketer first and an administrator later.

Yes, of course. I would want to see him as coach. And I think he would make a very good coach. He was a very good captain and someone who could understand the nuances of his sport. Let me tell you what makes a good coach. At this level, you don’t teach the players how to play. For example, do I teach Sindhu or Satwik and Chirag how to play? Absolutely not. They know it all. However, when the match is tied at 17-17 in the third set, my job as coach is to tell them things they are not seeing. To help them win from crunch situations. That’s what good coaches are able to do. Pep Guardiola reads the game bet­ter than most. That’s why he is a great manager. I think Sourav can be a very good coach or manager in future if he wants to take up such a role.

“Sourav is an icon. As captain, he had transformed Indian cricket and now he is the face of BCCI, which inspires many like me to take to administration. So, I must say, for me too, he is someone I have learnt a lot from and will continue to look up to”

Finally, your wish for him on his 50th birthday?

All I will say is that I wish him all the health and happi­ness and success in everything that he does. He has al­ready done a lot for sport but I am sure he will contin­ue to do a lot more in the years ahead. As he turns 50, it is time for all of us to celebrate him and look back and ap­preciate what he has achieved. So, I wish him a very hap­py birthday and I wish and pray that he grows stronger in the days ahead. I look forward to meeting him in the not-too-distant future.