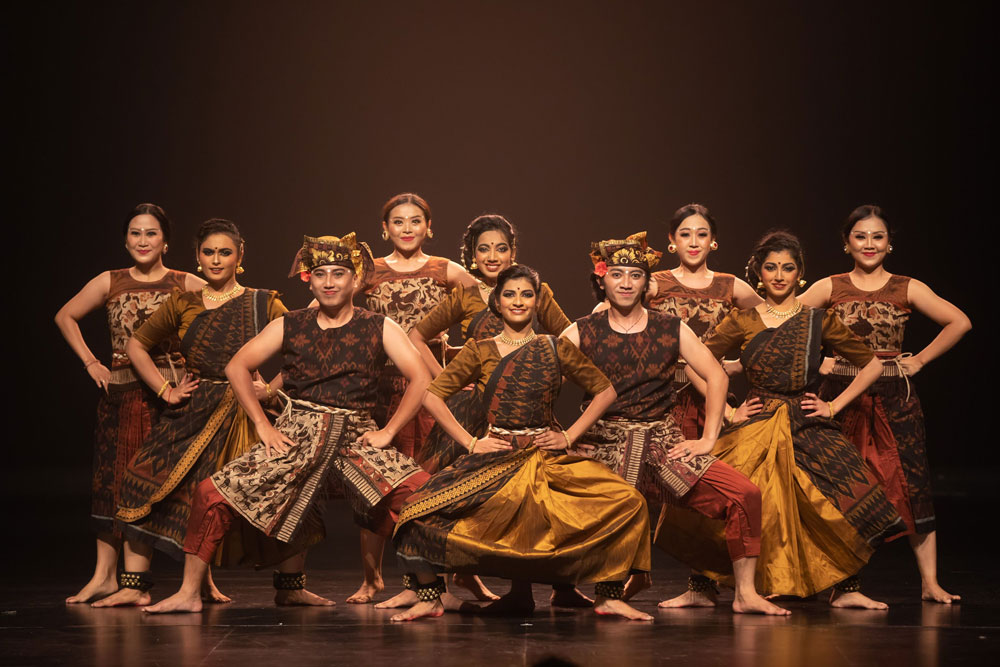 The mourners cry, for death is the end of life, and their last act of reverence is a handful of rice in the mouth of the departed—the vaak arisi. The end is also the beginning—of a new life and rice is an essential part of the celebration of birth. Thus begins ARISI: Rice, a celebration of the role of rice in Asian cultures. This tiny grain is a staple food across Asia and Southeast Asia, and all the lands from India to China and Japan grow and consume rice, without which there could be no life.

Aravinth Kumarasamy, creative head and art director of Apsaras Arts of Singapore, has put up several unique creations. He recently presented a mystical and abstract dance drama in Singapore titled ARISI: Rice to celebrate this grain of life.

The dance drama starts with the Tamil Shaivite Saint Manickavasagar’s song of death:

‘Death is when it’s all over, Death is when one worries no more,
Death is mysterious…
The mouth that relished all that you cooked, can hardly taste this rice now.
Rice, O Rice.’

This is followed by the birth of a child: the first solid food given to the child is a handful of boiled rice in a ceremony called anna praashanam, a Hindu rite of passage (saṃskaara) that marks an infant’s first intake of food other than mother’s milk, to the beginning of education, when the child writes his first letters on rice grains in a ceremony called akshar arambham. Whenever elders bless a young person, rice grains are sprinkled on the head of the latter. Rice is a part of our life cycle. It is offered to the deceased as the last meal before he leaves home.

The dance choreographer (and principal dancer) Mohanapriyan Thavarajah injected depth into the visual aesthetics by inserting elements reflective of the rice cultures. It combined the Bharatanatyam of India with Balinese dance choreographed by Prof I Wayan Dibia. The third component of this presentation is the Chinese orchestra. This unique dance drama was held at the Esplanade—theatre on the Bay—Singapore, which can simultaneously accommodate three orchestras—Chinese, Indian and Balinese. ARISI is a story of rice cultivation that goes back 4,000 years. But the dance drama focused on rice in the contemporary matrix from death to birth, from cultivation to celebration. 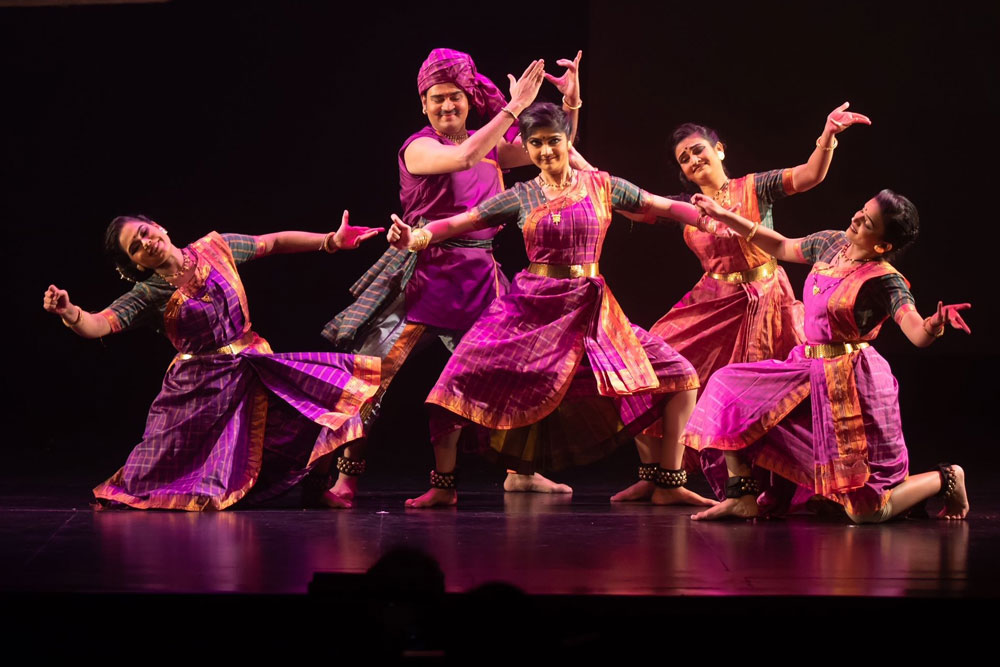 After the prologue on Death and Birth, ARISI goes on to the ‘Sounds of the Rice Fields’ where the Tamil Kamba Ramayanam inscription was brought to life:

According to Balinese legend, Devi Sri, the rice goddess, and her consort Vishnu, created fertility on earth by coming back as water and earth. The result is the rice plant, which produces grains to nourish humankind.

ARISI then goes into the cultivation of rice, with the Balinese culture of blessing ceremonies in the rice field, the planting process from ploughing to sowing to transplantation of seeds and watering. While planting, farmers use music and dance to overcome fatigue. But it is not always beautiful. The farmers endure natural calamities through drought, pestilence, and vermin. Today, climate change is yet another calamity as unpredictable weather wreaks uncertainty over the rice fields. All these are described through Bharatnatyam and Balinese dance, establishing the similarities between the two dance styles. Balinese genres of music, such as gamelan and kekchuk, are so similar to the rhythms of Bharatnatyam. 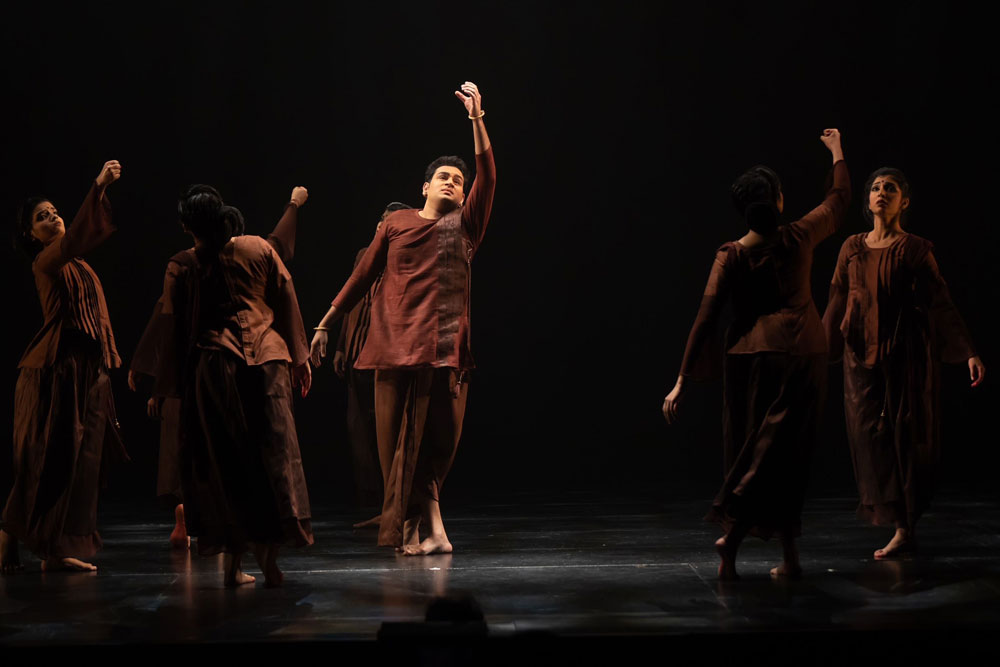 Finally, the rain arrives. In Eastern Balinese tradition, a stick fight dance is practised in the rice field to invoke rain.

“It’s a deluge, breaking all barriers!
The universe is swaying in this tempest!
“Blinding lightning. Roaring oceans.
Thundering clouds. Whistling winds piercing the skies.
Is it the sky playing the rhythm?
Where did this torrent come from, my friend?”

Living in Singapore and descended from Indian migrants, Aravinth has brought out the pathos in the life of rice farmers who are forced to leave their families in India and live alone in Singapore, sharing a room with many others in order to earn enough money to enable their families to build a house back home or to water their fields. The story of these migrant workers is woven into the drama by strategically placed documentaries. Aravinth tells the story of young people from south Indian farming communities who have left their rice fields to work in the big city, raising thought-provoking questions on the sustainability of rice cultivation for future generations. The dance performance is integrated with film footage capturing the lives of former farmers now eking out a living as migrant workers in Singapore. 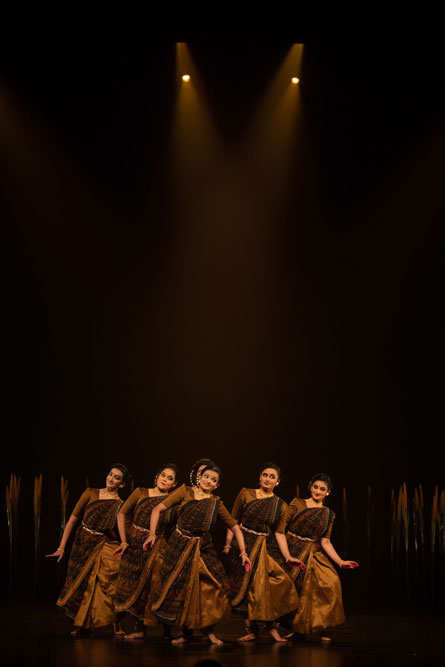 In 2003, I wrote a couple of articles for Roy W Hamilton’s The Art of Rice—Spirit and Sustenance in Asia. After the pandemic, Aravinth Kumarasamy came to me and said that he wanted to do a production on arisi or rice. I showed him my book which he immediately ordered online. The various rice cultures of Asia have been delineated in this book, while mine was an illustrated story of rice in every aspect of human life in Tamil tradition. He has made a very prosaic and well-researched production into an evening of beautiful music and dance.

It ends in celebration, as the rice grains reach maturity and long for the rays of the sun.

The harvest is the annual affair when the entire village harvests rice and celebrates with song and dance. Finally, pongal, a dish made of rice, milk, and jaggery, is offered to the Sun God, Surya, on a day called Pongal (Makara Sankranti in other parts of India). This is also the time to honour the rice goddess of Tamil Nadu, Ponniamman. Early morning, people boil the rice with milk and jaggery in a clay pot, and when it overflows, they cry “pongalo pongal”—the “pot boileth over”. There is no life on earth without the sun.

Meanwhile, at Kapal village in the south of Bali, the villagers celebrate the bounty of the harvest with a “rice fight”. They playfully throw cooked rice cakes in the form of little pillows at each other. During a Hindu wedding, rice is sprinkled over the newlywed couple to bless them with a happy married life. A child is initiated into dance in a ritual where she takes her first steps on rice grains. The bride is welcomed into her new home carrying a pot of rice as a symbol of prosperity and seeks blessings from Annapoorna, the goddess of food and nourishment. 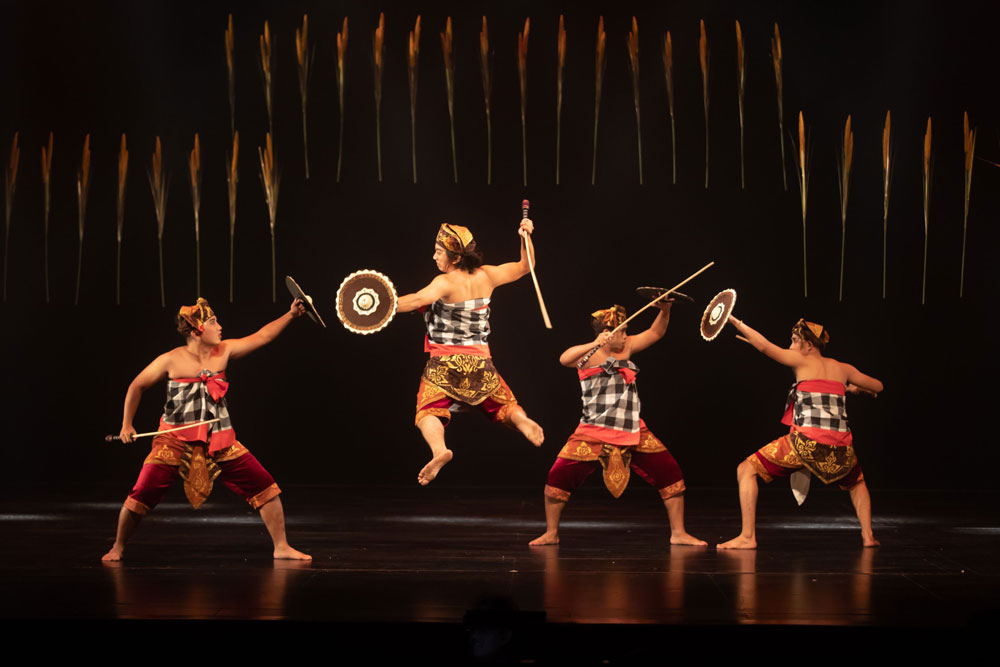 In ARISI, Aravinth explores the cultural links that rice has created across Asia. Using the techniques of dramaturgy, Aravinth and dramaturg Lim How Ngean brings together elements of choreography, music, set design, and written text to tell the story of rice. Rajkumar Bharathi has created an inspiring music score based on the word ARISI, integrating the poetry of Manickavasagar, Kambar, and Subrahmanya Bharathi, with some nuggets written by him, while music producer Sai Shravanam combines the music elements from south and north India, Bali, China, and Singapore to create a musical platform for this dance drama. In another first, the Singapore Chinese Orchestra has performed for an Indian dance production using key instruments such as the guzheng, yangqin, erhu, dizi, and pipa, breathing Chinese sounds into a music score based on Carnatic and Hindustani music. Says Aravinth, “The rice grain has a lot of significance in the cultures of Asian civilisations. This sparked the idea of telling stories about rice and its cultural customs through dance and music.”

Between Mohanapriyan Thavarajah and Prof I Wayan Dibia of Bali, the dance choreography is a cross-cultural collaboration with an interplay of Indian and Balinese classical dance, Mohanapriyan has also brought depth into the visual aesthetics by inserting elements of the clothes worn by the rice field workers. Stalks of rice decorate the stage while the unusual lighting throws the dancers into several shades.

(The film on ARISI will be projected at the CP Ramaswami Aiyar Foundation, Chennai, on December 31, 2022, at 10.30AM. along with an introduction by Aravinth Kumarasamy.)