Did the publisher enrich himself at the expense of the translator? 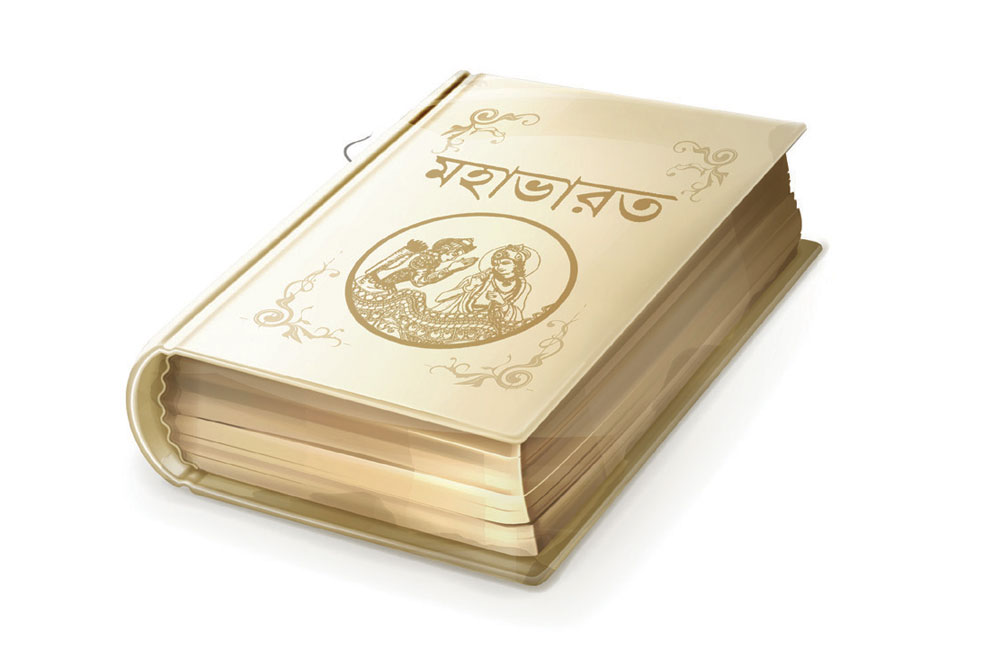 LET ME CONTINUE with Kisari Mohan Ganguli and his translation of the Mahabharata.

We know more about the Ganguli translation from a book published in 1897 (Epic Poems and Puranas, The Sacred Books of the East Described and Examined, Hindu Series, Volume 3, the Christian Literature Society for India, London and Madras, 1898). ‘The first complete translation of the poem was projected by Babu Pratap Chandra Rai, C.I.E. As a bookseller he had published a Bengali translation of the Mahabharata, which may have led the late Dr. Rost to suggest to him the idea of an English translation. The expense was estimated at a lakh of rupees. An institution, to meet this outlay, was founded called the Datavya Bharat Karyalaya, and donations were asked from Government, Indian princes and others, it being proposed to distribute the bulk of the copies gratuitously. The first section was issued in 1883. On December 31st 1894, when the Thirteenth Book had been completed, the Babu bade farewell to his supporters, and, not long afterwards, he died. His widow, Sundara Bala Roy, then bravely took up the work. In a notice prefixed to the Mausala Parva, issued in 1896, she says: ‘Assisted by his friends and patrons, my husband was able to issue 94 fascicules. Since his demise I have been able to issue 4 fascicules within a period of eight months. I have unhesitatingly devoted my little stridhan to the purpose, not only has that little been swallowed up, but I have been obliged to supplement it by debts.’ In a notice, dated July 16th 1896, Sundari Bai [sic] announced the completion of the work, and rendered warm thanks to the friends who had assisted in the enterprise. Babu Pratap Chandra Rai claimed only to be the publisher of the work. The actual translator was Pandit Kesari Mohan Ganguli. In the first half of the work he generally adhered to the Bengal text; in the latter half to the Bombay edition. A memorial, signed by Sir Arthur Arnold, Professor Cowell, Sir M. Monier-Williams, Lord Northbrook, and others was lately presented to the First Lord of the Treasury applying for a pension to the Pandit who had laboured in the translation for thirteen years, and was now old. This monumental work reflects great credit both upon the translator, the publisher, and his widow. The translation contains in all about 7400 demy octavo pages, equal to nearly 25 volumes, each containing 500 pages. Another English translation, edited and published by Manmatha Nath Dutt, M.A., Rector, Keshub Academy, was commenced in 1895. It has been printed as far as the Bhishma Parva.’

This book was published in 1897 and it mentions a pension for Kisari Mohan Ganguli. Courtesy the National Archives, I discovered some Home Office correspondence and noting from 1898. Those files state, ‘The memorial of Babu Kisari Mohan Ganguli may be read. He prays that he may be allowed pension either from the Indian revenues or the Civil List in England in acknowledgement of his services as the English Translator of the Mahabharata published by the Late Babu Pratapa Chandra Roy. The prayer is supported by the Government of Bengal… . The proposal to grant a pension to Babu Kisari Mohan Ganguli for his literary labours from the Civil List fund in England was submitted to the First Lord of the Treasury by the Dean of Canterbury and certain other personages. But it will be seen from the concluding portion of Lord George Hamilton’s letter to Sir Edwin Arnold that his Lordship desired that the initiative should be taken by the Local Government. This has now been done, and Sir John Woodburn ‘recommends the grant of a special pension of Rs 1,200 a year to Babu Kisari Mohan Ganguli,’ which it apparently intended should be paid from the general revenues of the State.’ The name given in the 1897 book was wrong. It should have been Sir Edwin Arnold, author of The Light of Asia, not Sir Arthur Arnold. In case it is not clear, Ganguli applied to the government for a pension.


PC Roy had published a Bengali translation of the Mahabharata. Since he was a publisher and not a translator, he commissioned Sanskrit scholars to do this for him. That translation having been a success, he decided to do one in English too

Let me quote from what AT Pringle, Assistant Secretary, Madras and Member of the Governor General’s Council, wrote in the files in 1898. ‘I venture to think that the idea of giving either a Civil List pension or an Indian pension should be discouraged on public and general grounds. I have spoken to a considerable number of well-informed natives of this country about this translation, before and after the question of pensioning Kisori [sic] Mohan Ganguli for his share in the work was started, and could never discover any difference of opinion on the subject. The whole thing was a clever and huge speculation. It is now acknowledged that Pratapa Chandra Raya [sic] was merely the organiser, but at the time nothing was said about that. When the work was in a very early stage indeed, Pratapa Chandra Raya was lauded all over Europe, especially in France, for his nobility in having devoted his fortune, time, energies, and everything else to this magnificent and patriotic conception: then the State and the Princes and landowners of India were called upon to aid the task; very large sums were subscribed; clever advertisements brought in more and more money, every Native State was exploited. The organiser reaped his reward, he received honours which, if the nature of his connection with the work had been clearly understood at the time, he might have failed to secure; he also made a large fortune out of it; this is a matter of common knowledge. Unparliamentary language might be used about him. Now, surely it is neither possible, nor advisable, to ignore all this, when one person having already been decorated and having amassed wealth by this translation, another comes forward and wishes to reap some reward as well. The merits of the transliteration seem to be beside the question. The petitioner admits that he was ‘engaged’ to translate the work by Partapa [sic] Chandra Raya, it is commonly said, whether truly or not, I do not know, that the latter paid him very poorly, but after all, if one is hired to execute a particular job of this kind, and consents to work for insufficient wages, one can hardly complain. In one sense, the petitioner was nothing but a hack; there have been hack-workers who were excellent scholars at the same time, no doubt, and Drs. Hoernle and Grierson would be able to say whether it is so in the present instance. But the facts about his share in the undertaking would be the same whether the translation is scholarly or not. Stress is laid in the letter by Dean Farrar and others on the ‘innate modesty’ which made the petitioner efface himself and yield the entire honour to his associate; the fact that he is a direct petitioner is hardly consistent with this view of the case. The Government of Bengal recommended the grant of a pension of Rs 100 per mensem. There are excellent scholars in this country of certainly far higher general repute than the memorialist… . It is impossible not to suspect, after reading the papers in this case and seeing from how many quarters testimonials and advertisements about the petitioner are proceeding, that there is an immense amount of wire-pullling, and that persons may be moving in the matter whose intention is to obtain same profit themselves by the agitation.’

Bengal was an amazing reservoir of talent then. Kaliprasanna Singha (1841-1870) translated the entire Mahabharata unabridged into Bengali. Between 1862 and 1873, the Burdwan edition of the Mahabharata was brought out, in Sanskrit and with a Bengali translation. There was the Bengali translation brought out between 1869 and 1874 by Pratap Chandra Roy. William Carey and Joshua Marshman brought out an English translation of the Valmiki Ramayana between 1806 and 1810, from Serampore. More or less at the same time, Hemachandra Bhattacharya brought out a translation in Bengali. Ganga Prasad Mukhopadhyaya, Ashutosh Mukherjee’s father, did a translation of the Valmiki Ramayana in Bengali, in verse form. Panchanan Tarkaratna (1866-1940) edited many Sanskrit texts and translated them into Bengali. Michael Madhusudan Dutt (1824-1873) did his version of the Ramayana story, Meghnad Badh Kavya (The Slaying of Meghnada). There were the Bibliotheca Indica editions. In 1840, Horace Hayman Wilson (1786-1860) published the first unabridged English translation of any Purana, the Vishnu Purana. Hara Prasad Shastri (1853-1931) was busy collecting manuscripts from Nepal and translating the Buddhist Puranas.

There will be more in the next column.