The Force of Destiny

When Yudhishthira enlightened his brothers on duty and action 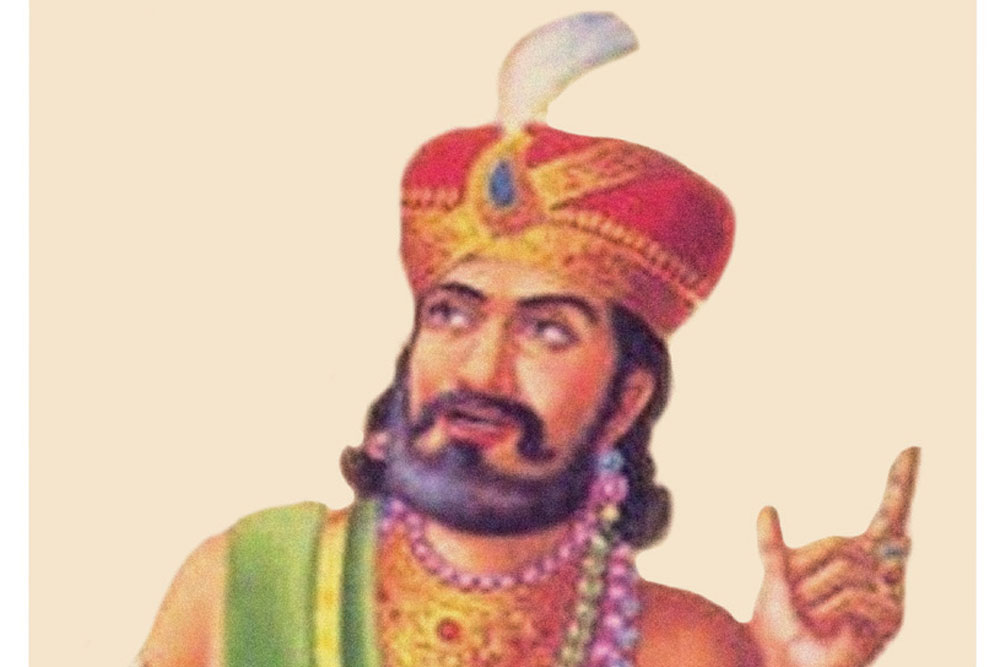 SINCE I HAVE SPOKEN about Apad Dharma (the dharma allowed in time of calamities) in the past, let me now mention Shadaja Gita. This is the only Gita in the Apad Dharma sub-parva of ‘Shanti Parva’. It consists of a single chapter and occurs towards the end of ‘Apad Dharma Parva’. Bhishma has just finished telling the Pandavas, and Nakula in particular, about the evolution of the sword as a weapon. The word shadaja means originating from six. The Shadaja Gita has individual views about dharma, emanating from the five Pandavas and Vidura. That explains the number six. Naturally, their perceptions about dharma differ.
Vaishampayana said, ‘When Bhishma said this and became silent, Yudhishthira left his presence and asked his brothers and Vidura.’

Yudhishthira asked, ‘The conduct of people is based on an aggregate of dharma, artha and kama. Which of these is the most important? Which is medium and which is the least important? If one wishes to conquer all three categories together, which of these must one control? O accomplished and satisfied ones! You should speak accurately.’

Vidura responded first and said, ‘A great deal of learning, austerities, renunciation, faith, the performance of sacrifices, forgiveness, the purification of sentiments, compassion, truthfulness, restraint and richness of the soul—these must be cultivated and the mind must not waver. These are the foundations of dharma and artha and can be subsumed in the single word of ‘welfare’. The rishis crossed over through dharma. The worlds are established in dharma. Devas obtained heaven through dharma. Artha is submerged in dharma. O king! Dharma is supreme in qualities. Artha is said to be medium. The learned ones say that kama is least important. Therefore, a person must control his atman and make dharma the most important.’

When Vidura had completed, it was Arjuna’s turn. ‘O king! This world is an arena for karma and such conduct is praised—agriculture, trade, animal husbandry and many kinds of artisanship. Among all these tasks, there is nothing that transcends the need for artha. The shruti texts have said that without artha, dharma and kama cannot occur. A victorious person obtains artha and can pursue supreme dharma. He is capable of following kama, which is difficult for those with unclean atmans to obtain. The shruti texts say that dharma and kama take the form of artha. These two can be attained through the successful acquisition of artha. Those who have been born in superior lineages surround the man who possesses artha, just as the beings always worship Brahma. Those who have matted hair, are clad in deer skin, are controlled and have smeared themselves with mud, those who have conquered their senses, have shaved their heads, have no offspring and dwell separately—even they hanker after artha. There are others who are bearded and are attired in ochre garments, covering themselves well with humility. They are learned and tranquil. They are free and have given up all their possessions. Even among them, some desire heaven and some others strive for artha. Some give up the practices of their lineages and are established in their own individual paths. There are believers and non-believers, completely engaged in supreme restraint. Lack of jnana is submerged in darkness and jnana provides the radiance. [Only some have truly renounced and have seen the light. Others are still ignorant.] A person who possesses artha can maintain his servants in pleasure and exert the rod against his enemies. O best among intelligent ones! That is the reason my view is accurate. Now listen to the words of these two [Nakula and Sahadeva]. Their throats are choking with words.’

Madri’s sons, Nakula and Sahdeva, usually spoke in one voice. It was no different with this question. ‘Whether one is seated, lying down, roaming around or standing, through the pursuit of superior and inferior means, one must always attempt to firmly pursue the acquisition of artha. This is hidden well, extremely difficult to obtain and is supremely loved. In this world, once one has obtained this, there is no doubt that one can directly obtain kama. Artha is united with dharma and dharma is united with artha. This is the way amrita is united with honey. Therefore, our view is the following. There can be no kama without artha. How can there be dharma without artha? Thus, people are scared of those who are outside the pale of dharma and artha. Therefore, even if a person thinks that dharma is the most important, he must control his atman and seek to accomplish artha. If beings trust a person, then he can accomplish everything. One must first pursue dharma, and then artha that is in conformity with dharma. Kama should be pursued after that. These are the fruits of the successful pursuit of artha.’


All the beings have been appointed by destiny. Know that destiny is powerful in everything. One cannot attain moksha by undertaking karma. Know that whatever is going to happen, will happen

Bhima would naturally have a different view. Bhima said, ‘A person without kama does not desire artha. A person without kama does not desire dharma. A person without kama cannot follow the path of desire. Therefore, kama is superior. It is because they are united with kama that the rishis are controlled in their austerities. They eat leaves, fruits and roots. They subsist on air and are greatly restrained. There are others who are engaged in chanting the Vedas and are devoted to studying. They perform shraddha rites and sacrifices and receive donations. Merchants, farmers, herdsmen, craftsmen and artisans are engaged in the tasks of devas. But it is kama that drives the action. Driven by kama, men enter the ocean. Kama has many different forms. Everything is driven by kama. There is nothing, there was nothing and there will be nothing that is beyond the simple fact of kama. O great king! This is the essence and dharma and artha are dependent on it. Kama is to dharma and artha what butter is to curd. Oil is better than what is left of oilseeds after the extraction of oil. Ghee is better than what is left of milk after churning. Good fruits are better than wood. Kama is superior to dharma and artha. Just as honey comes from the juice of flowers, like that, happiness is generated from kama. O king! Serve kama. Pleasure yourself with women who are attired in extremely beautiful garments and are ornamented, mad with intoxication and pleasant in speech. Kama will come to you swiftly. In this group, this is my view. O Dharma’s son! You should not reflect about this for a long time. If virtuous people paid heed to these beneficial words, which are not shallow in import, there would be the greatest lack of cruelty. One must serve dharma, artha and kama in equal measure. If a man serves only one of these, he is the worst. A person who is accomplished in two is said to be medium. The superior person is engaged in all three categories. He is wise. His well-wishers smear him with sandalwood paste. He is adorned in colourful garlands and ornaments.’

Yudhishthira thought for a while and did a summing up, articulating his own views. ‘There is no doubt that all your determinations are based on the sacred texts of dharma and that you are acquainted with the proof. You have carefully spoken these words to me and I have heard and got to know about kama. You have said that it is essential in this world. However, single-mindedly, listen to the sentiments in my words. A man who is engaged in neither good deeds nor evil ones, and not engaged in artha, dharma or kama, is freed from all taints and looks on gold and stones in the same way. He is successful in freeing himself from unhappiness and happiness. Beings are born and they die. They face old age and decay. There have been repeated instructions on moksha and it has been praised. But we do not realise this. The illustrious Brahma has said that one not bound down by affection does not suffer these [birth, death, old age and decay]. The learned ones have said that nirvana is supreme. Therefore, one should not act in accordance with what is pleasant and what is unpleasant. However, a person who follows kama does not attach importance to this. I act wherever I have been engaged. All the beings have been appointed by destiny. Know that destiny is powerful in everything. One cannot attain the objective by undertaking karma. Know that whatever is going to happen, will happen. Even if a person is devoid of the three modes, he can attain this objective. [The objective being moksha. The three modes are dharma, artha and kama.] Thus, this is the secret for the welfare of the worlds.’

Vaishampayana concluded, ‘These foremost words were pleasant to the mind and full of reason. They heard them and were delighted. They joined their hands in salutation to the foremost one among the Kuru lineage. Those words were extremely beautiful and adorned with letters, syllables and words. They were pleasing to the mind and devoid of thorns. On hearing the words spoken by Yudhishthira, all of them applauded those words.’