The evolution of curses in mythology and cinema 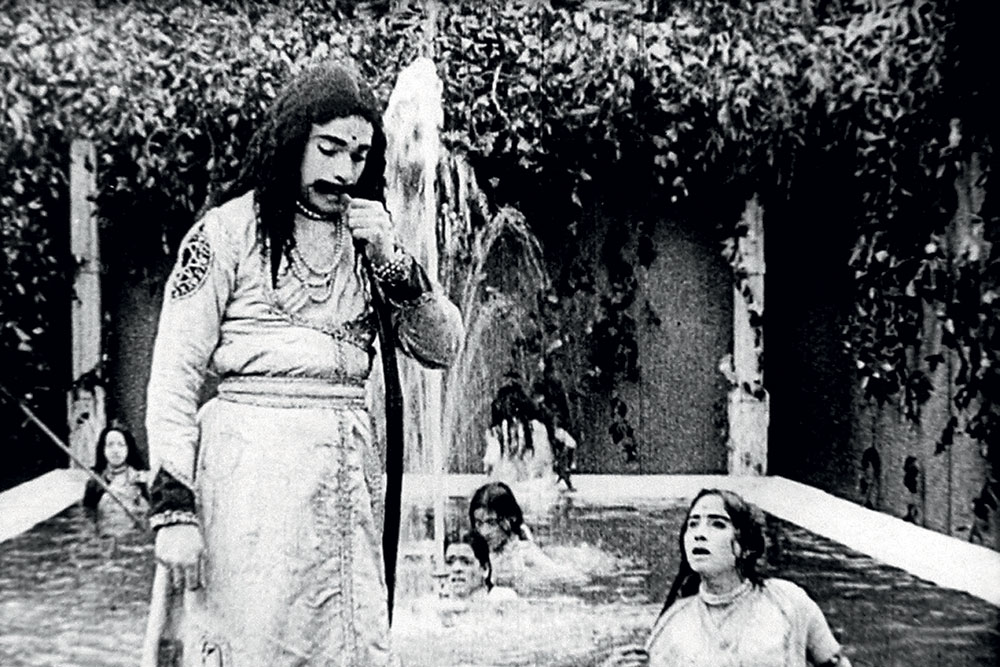 A scene from Raja Harishchandra (1913)


EVERY TUESDAY, I MEET online with a group of scholars in India and worldwide to study the Ramcharitmanas. We are currently reading the Bala Kanda, and in the section about the causes of Rama’s incarnation, we learnt about Narada’s delusion and curse (Stanzas 125-139). After being tricked by Vishnu, Narada curses him to experience the same things. He curses Vishnu to be born in the body he took on to trick Narada (that is, as a human king), to have monkey helpers (as he gave Narada the form of a monkey), and to suffer separation from a woman. It reminded me of the important and frequent roles that curses (shaapa) take in all kinds of narratives, and to think of who can curse another and why.

Curses are found in many cultures where they are utterances that can lead to harm, especially if the person saying them has some particular authority. Some can curse because they have innate powers, including gods, but humans can acquire the ability through performing penance—fasting, meditation, austerities—or because one is right and has been wronged.

The curse is often paired with the boon, although gods or kings usually give the latter. Boons can turn into curses; so, when Ravana’s brother, Kumbhakarna, was offered a boon by Brahma, Indra persuaded Saraswati to make him stumble on his words. So, instead of asking for Indraasana (the throne of Indra), he said nidraasana (bed for sleeping). However, curses can have limits. So, they may apply only if one does something, or they may be short-term, or they can be mitigated. In this case, Ravana asked Brahma to mitigate the boon/ curse so that Kumbhakarna would sleep for six months and then wake up.

Ganesha curses all who look at the moon on the fourth day of the lunar month of Bhadrapada, known as Ganesh Chaturthi. A popular version is that Ganesha ate so many sweets that his stomach swelled up. As he was riding home on his rat, a snake scared the rat, which reared up; so, Ganesha fell down, and his stomach burst, spilling the sweets. Ganesha picked up his sweets and then tied the snake around his stomach as a belt. The moon laughed at him and so Ganesha pulled off his tusk, and threw it at the moon, cursing him so that he would not be seen. The world went dark, and the other gods asked Ganesha to restore the moon. He said the curse could not be undone but the moon would wax and wane each month.

Words used in a curse are so powerful that even the gods cannot take them back nor can they cancel them, but they can limit or mitigate them. The power of words is seen elsewhere, in mantras or japas (repeating a mantra or a sacred name) or prayers. The evil eye, or nazar, or magic, jaadutona, are quite different as they are not purely verbal. The Atharvaveda records some of the oldest charms and spells but we don’t know how they were used, whereas events in the Puranas and the epics have become famous and part of everyday culture.

Gods may curse gods; so, Shiva took on the form of a pillar of fire and asked Brahma to find the top and Vishnu, the bottom. Brahma said that he had found the top although he hadn’t. So, Shiva cursed him not to be worshipped in temples. This is why there are so few Brahma temples today, the most famous exception being in Pushkar.

The Mahabharata has many curses of different types. These include the following: Urvashi, the apsara, curses Arjuna to be a eunuch, Brihannala, although the curse is mitigated to last only a year; the sage Kindama, killed by King Pandu when having sex with his wife in the form a deer, curses the king that he would die if he slept with his wife; Yudhishthira, after finding out Karna’s true identity that his mother Kunti had hidden, cursed all women to never keep a secret; Gandhari had a boon from Shiva that her son, Duryodhana, should have invincible armour, but as Krishna prevented the armour covering his entire body, she cursed him to die as the last of the Yadavas.


Dadasaheb Phalke’s Raja Harishchandra, said to be the first all-Indian film, is based on the story of another sage’s curse, this time, Vishvamitra

Perhaps, the person who curses most is the hot-tempered sage, Durvasa. He curses Shakuntala when she fails to offer him hospitality as she is distracted by her love for her husband, King Dushyanta, who has returned to his kingdom. Durvasa curses her, saying that her husband will not remember her. Shakuntala herself is unaware that she has transgressed, and is unaware of the curse. However, her friends plead with the sage so that he agrees that the king will recognise her, but only when he sees the ring she wears. On the journey to her husband’s kingdom, the ring falls off in a river and her husband rejects her though he is aware of some vague stirrings of sadness, which he attributes to a previous birth. However, it is only when a fisherman finds the ring in the belly of a fish that her husband remembers her.

Dadasaheb Phalke’s Raja Harishchandra (1913), said to be the first all-Indian film, is based on the story of another sage’s curse, this time, Vishvamitra. The king interrupts the sage’s yajna and is forced to renounce his kingdom, his son dies and his queen is about to be executed for murder until Shiva appears and Vishwamitra restores his kingdom and his family.

Today, the curse as a plot device is found only in horror and supernatural genres, which have been popular from the Ramsay brothers to Vikram Bhatt. One of the most interesting is Tumbbad (2018), where the curse of Hastar turns people who touch his treasure into monsters who have to burn. In Hindi films, people curse those who have wronged them, but their words no longer have the power they did. Grand speeches may invoke the gods and show the anger of the righteous but are not major plot devices.

The curses in the powerful narratives above are mostly given because someone, divine or human, insulted a person, divine or human, they should have respected. It is as if, Robert Goldman said, “the convention of the curse is nothing but a dramatic personalisation of the idea of karma.”

Hindi films operate within the norms of melodrama, which has its own plot devices. The curse is not used much but the good are rewarded and the bad are punished by the laws of the moral universe rather than because they are cursed or granted boons. Although the weak and vulnerable or those who are fighting for a just cause, such as for the Indian nation, are abused and insulted, they will ultimately prevail, perhaps through their own courageous actions or because a hero, more rarely a heroine, will restore their honour. Amitabh Bachchan’s “Vijay” films showed this clearly, while recent movies, made in south India which have been all-India hits, such as RRR and Pushpa, see the male hero suffering, but all ends well. Is this karma and does the hero perform tapas or penance? Does melodrama allow karma to become apparent to the audience and thus do away with the need for someone to curse? In RRR (2022), could the curse be the presence of the British, which goes against dharma; and might our heroes, one seeming to be Rama incarnate, be enacting righteousness?

In everyday life, while we may believe in the operation of karma, whether from previous lives or the results of our actions, we may be impatient and want to take matters into our own hands. We still curse our enemies in our everyday speech, but rarely expect direct results, and we are aware that what you wish may rebound on you. My favourite curse in India is the one found on the back of lorries to deflect the evil eye: ‘Buri nazarwale tera muh kala’.