The Enigma of Krishna

The origins and message of the Pandava Gita 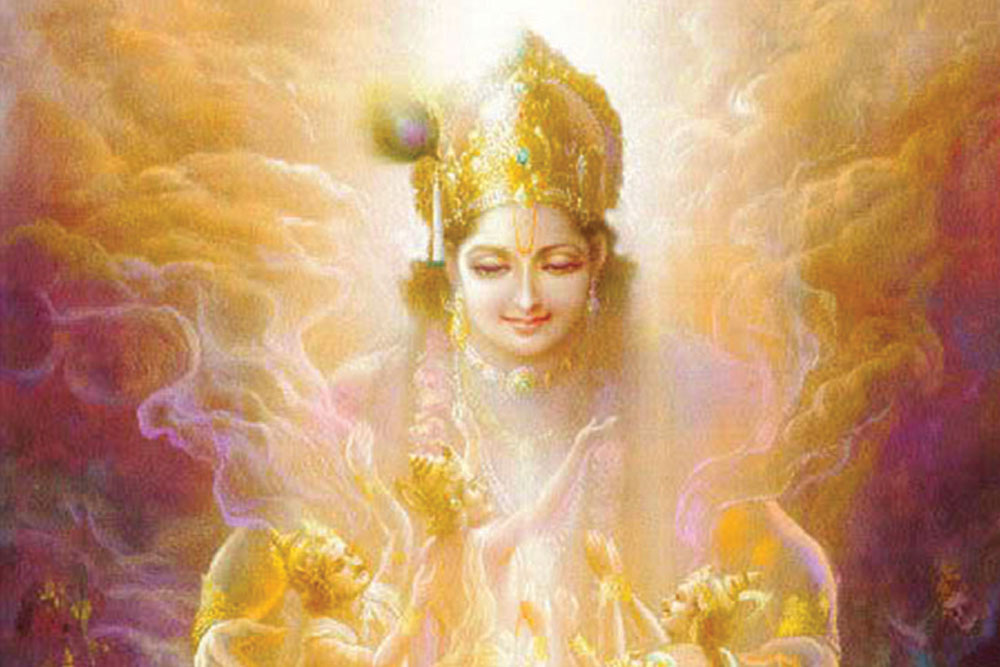 I AM NOT GOING to use Devanagari. There is a shloka that goes, ‘Janaami dharmam na cha me pravritti, janaami paapam na cha me nivritti.’ This is often quoted by various people and was spoken by Duryodhana. The second part of the shloka is also familiar, though not quoted that often. ‘Kenaapi devena hridisthitena yathaa niyuktosmi tathaa karomi’. I have often been asked, where in the Mahabharata did Duryodhana say this? The answer is, nowhere. This shloka is not from the Mahabharata. It is from a text known as the Pandava Gita or the Prapanna Gita. It is called a Gita and it is not a text that is part of the Mahabharata. But it is a text that generally has protagonists from the Mahabharata, singing chants about Krishna’s greatness. It is permeated with bhakti. Therefore, though not a part of the Mahabharata, it has strong links with the Mahabharata. Among the protagonists, the most important are the Pandavas. Hence, it is known as the Pandava Gita, though it is really about what the Pandavas and others chanted. The word ‘prapanna’ means ‘to seek refuge in’. Since this is about seeking refuge with Krishna, it is also known as the Prapanna Gita. No one knows who compiled this collation and when. Some of the shlokas are indeed from the Mahabharata, others from various Puranas. Though anonymous, it is a popular and Mahabharata-related Gita. Depending on which edition you use, there will be a single chapter, with around 83 shlokas. I have not seen an edition with a translation in English. But translations in Indian languages exist.

The most famous shloka is undoubtedly the quote ascribed to Duryodhana. Actually, there are two shlokas in Duryodhana’s quote and only the first is generally familiar. Therefore, let me give a translation of both shlokas. Duryodhana said, ‘I know dharma, but do not practise it. I know sin, but do not refrain from it. There is a divinity who is established in my heart. I do whatever he engages me in. O Madhusudana! I am only a machine. Please pacify my sins. I am the machine, you are the one who controls the machine. Please do not blame me for my sins.’

As I said, shlokas from other places have been used to compile the Pandava Gita. Most people will have heard of the following: ‘Tvameva maataa cha pitaa tvameva, tvameva bandhushcha sakhaa tvameva, tvameva vidyaa dravinam tvameva, tvameva sarvam mama deva deva.’ In the Pandava Gita, Gandhari says this. It is translated as: ‘You are the mother and you are the father. You are the relative and you are the friend. You are knowledge and you are wealth. O lord of the gods! You are everything to me.’ ‘Yatra yogeshvarah krishno yatra partho dhanurdharah.’ Who does not know that one? It is the concluding verse of the Bhagavat Gita, spoken by Sanjaya. In the Pandava Gita, it is spoken by Vaishampayana. It is translated as, ‘Wherever Krishna, lord of yoga, and Partha, the wielder of the bow, exist, it is my view that wealth, victory, prosperity and good policy certainly exist.’
To give you a flavour of the Pandava Gita, let me give you some other examples.

Brahma said, ‘There are men who know about the supreme and are devoid of attachment. They always remember Narayana, the guru of the gods. Through this dhyana, they destroy all sins in their minds. They do not drink the mother’s milk again.’ (That is, they are not born again.) Indra said, ‘The man named Narayana is famously spoken about among men on earth as a thief. As soon as he is remembered, he steals away all the accumulated sins earned over many births.’

Yudhishthira said, ‘His complexion is like that of a dark cloud. He is attired in a yellow silken garment. Because of Kaustubha, his body is radiant. He associates with the virtuous. His large eyes resemble a lotus. I worship Vishnu, who is alone the lord of all the worlds.’ Bhimasena said, ‘The earth, with all its mobile and immobile objects, was submerged in the flood of water and the one whose form is the universe assumed the form of a varaha [boar] to raise her up on his snout. May that illustrious Svayambhu show me his favours.’ Arjuna said, ‘I seek refuge with Hari, the destination for great-souled ones. He cannot be thought of. He is not manifest. He is infinite. He is the lord without decay. He is the lord who thinks of the creation of the universe. He is the one who thinks about the extension of the three worlds.’ Nakula said, ‘Bound by the noose of destiny, if I descend downwards [into hell] or am born in an ignoble lineage or as a bird or insect or have hundreds of births as a worm, let my inner atman meditate on Keshava. Let him be in my heart and let me have singleminded devotion towards him alone.’ Sahadeva said, ‘There are those who prostrate themselves before the infinitely energetic Vishnu, in the form of a Yajna Varaha. I bow down before them repeatedly.’ Karna said, ‘I do not speak of anyone else, hear of anyone else, think of anyone else, remember anyone else, worship anyone else or seek refuge with anyone else. O Shri Shrinivasa! O Purushottama! Devotedly and lovingly, I seek your lotus feet. Please make me your servant.’

Kunti said, ‘O Hrishikesha! Determined by the fruits of my own karma, whichever birth I proceed towards, in that form, let my devotion towards you be firm.’ Madri said, ‘There are those who are devoted to Krishna. They remember Krishna in the night and also remember Krishna when they wake up. Like oblations aided by mantras enter the fire, in other bodies, they enter Krishna.’ Draupadi said, ‘O Keshava! Wherever I am born, as an insect, bird, animal, reptile, rakshasa, pishacha or as a human, through your favours, let me behave in such a way that my devotion towards you does not waver.’ Subhadra said, ‘Prostrating oneself before Krishna alone is the equal of performing avabhritha after ten horse sacrifices. However, there is rebirth after ten horse sacrifices. After prostrating oneself before Krishna, there is no rebirth.’ (Avabhritha is the most important final component of a sacrifice, characterised by the taking of a bath.) Dhritarashtra said, ‘I repeatedly prostrate myself before the cause behind vamana, the infinitely valorous Narayana. I prostrate myself before Purushottama, who wields the Shri Sharnga bow, the chakra, the sword and the mace.’

Uddhava said, ‘If a person forsakes Vasudeva and worships another deva, he is like an evilminded and thirsty man who digs a well along the banks of the Jahnavi.’ (Jahnavi is the river Ganga.) Dhaumya (the family priest of the Pandavas) said, ‘There may be good deeds I have performed near the water, while lying down, while seated, during the day, or at night. Let Janardana be satisfied with what I have done.’ Sanjaya said, ‘There are those who are afflicted, distressed, limp and scared, with terrors like tigers and other things present. As soon as they chant Narayana’s name, from that very sound, they are freed from their miseries and become happy.’ Akrura said, ‘I am Narayana’s servant, the servant of his servant, the servant of the servant of his servant. Indeed, in this world, there is no other lord for men. Therefore, I am the most blessed in this world.’

Shalya said, ‘His complexion is like that of the atasi flower. He is attired in yellow garments. Those who prostrate themselves before Govinda have nothing to fear.’ Virata said, ‘There are those who are Vasudeva’s devotees, serene, with their minds only on him. From one birth to another birth, let me the servant of their servants.’ Virata also said, ‘I prostrate myself before the divinity of Brahmanas, who ensure the welfare of cattle and Brahmanas. I repeatedly prostrate myself before Krishna Govinda, who ensures the welfare of the universe.’ (This is also a famous shloka, though few identify it with the Pandava Gita.) Bhishma said, ‘O Krishna! O one who is affectionate towards those who seek refuge! When destiny is adverse and relatives dwindle away, please show your compassion and save me.’ Drona said, ‘Janardana is the lord of the three worlds. The wielder of the chakra has killed daityas and lords among men. But they have gone to Vishnu’s city. Therefore, the divinity’s rage is equal to a boon.’ Kripacharya said, ‘O one who removed the burden of Madhu and Kaitabha! O lord of the worlds! As a result of my birth, I pray for only this fruit. Please show me your favours and remember me. I want to be the attendant of your servant’s servant, the servant of the servant of your servant.’
Krishna himself said, ‘‘O Krishna!’ ‘O Krishna!’ ‘O Krishna!’ If a person always remembers me in this way, like raising a lotus out of water, I raise him up from hell.’ ‘O men! I raise up my arms and always say that if a being performs japa every day, at the time of death, or in the field of battle, addressing me as Mukunda, Narasimha and Janardana, I will grant him his wishes, even if he is like a block of stone or a piece of wood.