Invoking the Goddess for protection 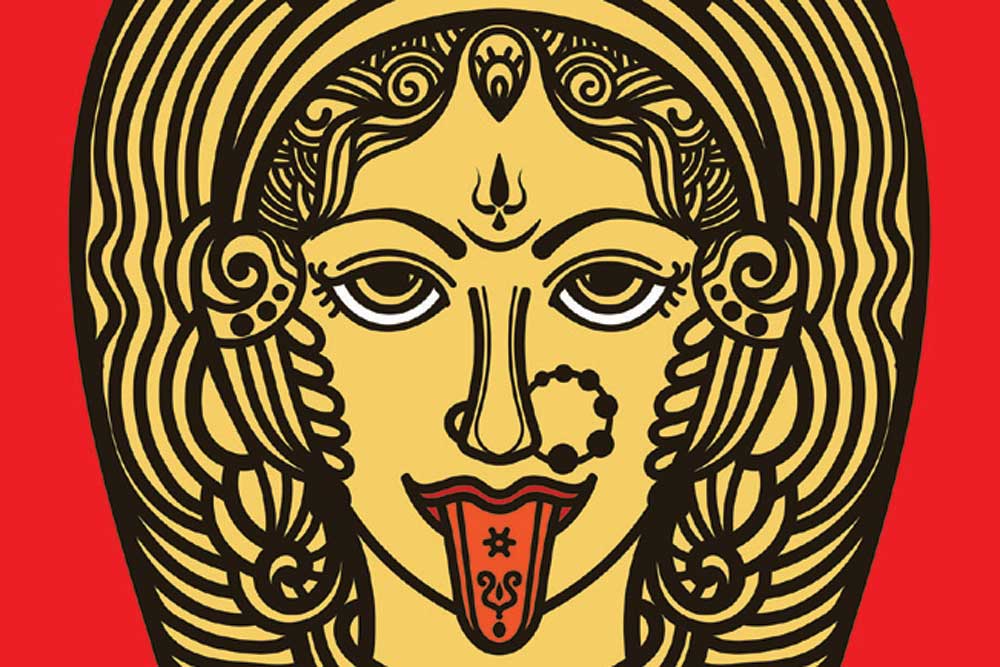 
IN AN EARLIER column, I had spoken about Shumbha and Nishumbha and their death. When they died, the gods prayed to Devi again. This is a famous prayer, known as the Narayani suktam from Devi Mahatmya. Most people will have heard its recital.

Prayed to in this way, Devi was pleased. She bestowed a boon on the gods. She said that she would appear and save the gods whenever there was a calamity. She would reside on the slopes of the Vindhya mountains and be known as Vindhyavasini. There is a double kind of yardstick used to measure time—manvantaras and mahayugas. A mahayuga is a cycle of satya yuga (also known as krita yuga), treta yuga, dvapara yuga and kali yuga. A kalpa is one of Brahma’s days, and Creation lasts for that period of time. After that, when it is Brahma’s night, there is a temporary period of Destruction and deluge, before Creation starts afresh. A kalpa is divided into 14 manvantaras, a manvantara being a period during which a Manu presides and rules over Creation. There are also 71.4 mahayugas in a manvantara. Our present kalpa is known as the “Shveta Varaha Kalpa”. Within that, six Manus have come and gone. The present Manu is known as “Vaivasvata Manu”. In the present seventh manvantara, known as Vaivasvata manvantara, there will also be 71.4 mahayugas. We are in the 28th of these. Devi promised the gods that in the twenty-eighth dvapara yuga, she would be born through Yashoda’s womb, in Nanda’s lineage. This was, of course, Devi in her form of Yogamaya, connected to Kamsa’s story. In the future, she also said that she would devour demons and her teeth would turn as red as the flower of a pomegranate. Therefore, she would be known as Raktadantika, one with teeth that are red. In the future, when there was a drought, she would glance favourably with one hundred eyes and be known as Shatakshi (one with one hundred eyes). She would sustain the worlds with vegetables that grew from her body and would be known as Shakambhari (one who bears vegetables). At the time, she would kill a giant asura named Durgama and be known as Durga. Another giant asura, named Arunaksha, would cause depredations. She would kill him in the form of a bee and be known as Bhramari (bee). But all this would happen in the future, the point being that whenever the universe suffered, she would manifest herself. The Markandeya Purana tells us that we should especially recite and read the Devi Mahatmya on the eighth, ninth and fourteenth lunar tithis— ashtami, navami and Chaturdashi. This should particularly be done during autumn. Hearing the account from Rishi Sumedha, King Suratha and the vaishya Samadhi worshipped Devi and obtained all that they desired.


Devi bestowed a boon on the gods. She said that she would appear and save the gods whenever there was a calamity. She would reside on the slopes of the Vindhya mountains and be known as Vindhyavasini

This background from Markandeya Purana is enough to make us understand many allusions to stories about Devi, referred to in many stotrams. Argala stotram is an example. The word argali means a bolt on a door. Therefore, Argala stotram is recited before Devi Mahatmya. This stotram is like a prelude, representing the opening of a door before we recite the Devi Mahatmya. Most of us have heard it recited. I wish to highlight the allusions. For example, the reference to Devi as the destroyer of Madhu and Kaitabha, as the one who granted a boon to Vidhatri (Brahma). Or her being called the destroyer of Dhumranetra (the same as Dhumralochana), Raktabija, Chanda and Munda. She is the one who brought welfare to the three worlds by killing Shumbha and Nishumbha. She is the daughter of Mount Himalaya (the same as Himachala). When we hear these allusions in Argala stotram, we should know the background. And I mean the bits from Markandeya Purana.

This is also true of another beautiful stotram. The word mardana means to crush. Therefore, Devi is Mahishasura-Mardini, the one who crushed Mahishasura. Strictly speaking, this stotram is known as the Mahishasura-Mardini stotram. We don’t quite know who composed it. Some say Adi Shankaracharya. Others say the 16th century poet and scholar Ramakrishna Kavi, whom we also known as Tenali Ramakrishna. When we hear of Tenali Rama, we should remember that Tenali Rama worshipped Devi, particularly in her form as Kali. Whether it was Adi Shankaracharya or whether it was Ramakrishna Kavi, it is a beautiful stotram. Because of the first few words, most people know it as the Ayi Giri-Nandini stotram and it is often sung. The word “Ayi” is used to address someone, in this case, Devi. I could have translated “Ayi” as “Oh” or “Hey”, but that does not convey the sense of entreaty and respect. Why is Devi “Giri-Nandini”? Because she is the daughter (the “Nandini” bit) of a mountain (the “Giri” bit). The Ayi Giri-Nandini stotram is long and beautiful. I only wish to indicate how some of Devi’s accounts get woven into such compositions. The entire composition is addressed to Devi. “O one who resides on the summit of Vindhya, the supreme mountain.” “O one who is the wife of the one with the dark throat (Shiva)”. “O Mahishasura-Mardini”. “O daughter of a mountain”. “O one who shamed (defeated) Madhu and Kaitabha”. “You sent the distinguished and great Shiva as a messenger.” I hope you remember that Devi sent Shiva as a messenger to Shumbha and Nishumbha. “O one who reduced Dhumravilochana (the same as Dhumralochana) into one hundred particles of smoke”. The complete stotram has superlative poetry. I love the last line, which occurs as a refrain at the end of every verse. “Victory to you. O Mahishsura-Mardini! Victory to you. O one with the beautiful hair! O daughter of a mountain!”

As I said earlier, Devi’s story doesn’t feature only in Markandeya Purana. It figures in other Puranas, too, and the most familiar one is probably about Daksha’s yajna or sacrifice. Yajna is indeed a sacrifice, but the word yajna carries a nuance of worship that the word “sacrifice” doesn’t necessarily convey. In the cycle of Creation and Destruction, everything was destroyed. When it was Brahma’s day and a new kalpa started, Brahma desired to create the various worlds again. Initially, several sons were born to Brahma through his mental powers. One of these was Daksha, and Daksha was a prajapati. There were several other prajapatis, too, and they were known as prajapatis because they engaged in the task of Creation. Daksha had several daughters. One of these was Sati. Since she is Daksha’s daughter, she is known as Dakshayani. Sati was married to Shiva. I have mentioned the Mahapuranas earlier. There are also Upapuranas, or the minor Puranas. The story of Daksha’s sacrifice, and how Sati gave up her body, is recounted in many Mahapuranas and Upapuranas, with minor variations in details.