They return home only to discover how foreign Kerala has become 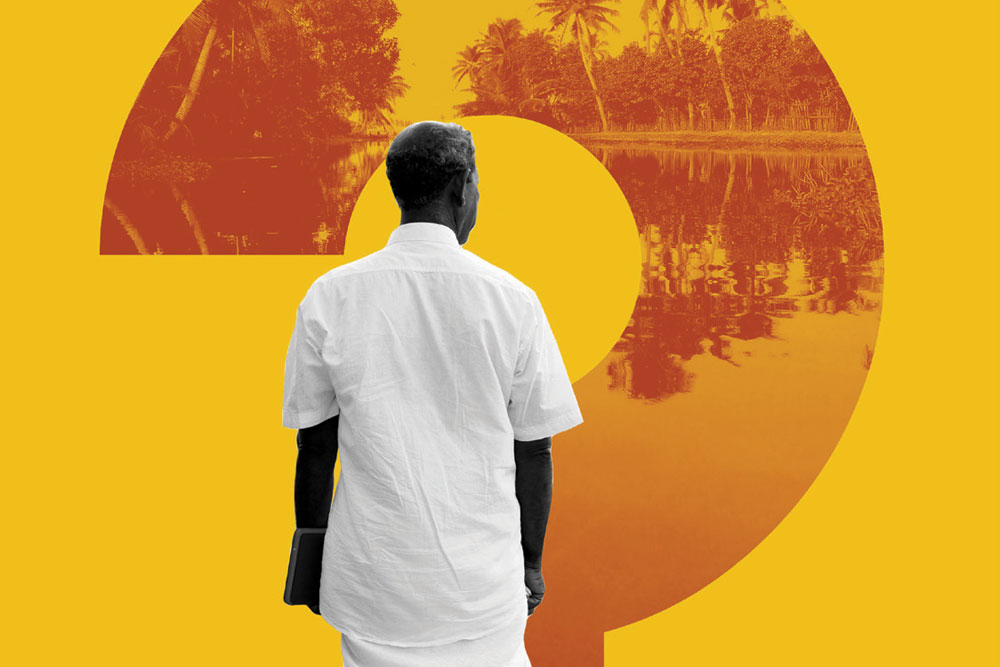 
AS KERALA HEADS into elections in early April, few things dominate the public discourse as politics and all the accompanying debates, gossip, insinuations and allegations. Based on the fury and sound of it all, signifying something, one might even be lulled to believe that it is politics that grants meaning to everyday life. But the story of Kerala’s residents is often the story of movements and migrations through various sociopolitical systems outside the state, in an effort to earn livelihoods that promise a rickety ascent into the middle class and fulfilment of accompanying vanities. The consequence of this outmigration is that the politics at ‘home’ acquires even more relevance—it often acts as an anchor to their lives as what the author Deepak Unnikrishnan calls ‘temporary people’. These are people we see in many countries who aren’t citizens or legalised residents but aren’t illegal either. Their status is linked to their employment and therefore they spend much of their lives in a form of vassalage to their employers. These persons keep many of these societies afloat without any direct legal right to its future. Their inner non-belonging births paroxysms, nostalgia and steady construction of imagined ideas of home—all of which are inadequately understood and often traduced by those who live more assured lives. This, of course, is not unique to Kerala but is a human condition that we see across migrant communities but few societies have constructed an entire sociocultural system where a great many residents rely on the idea of leaving home to flourish.

Malayalam, as I learnt, has a surprisingly precise word for that complex of sentiments that we would describe as nostalgia—grihaduratvam—the emotion born due to distance from home, which is often understood to be melancholy and longing, but this is not explicitly referenced. In Kannada, an exquisite neologism—grihaviraha—makes the accompanying melancholy more visible, reminding us of the typology of heroines in Indian dramaturgy—the virahotkanthitha nayika, a heroine worn down by separation from her beloved. But the separation from home produces other sentiments too: from all too common reactionary conservatism to contempt for all that is familiar at home, sentiments that are commonplace in any NRI gathering. But in Malayalam, grihaduratvam is a surprisingly popular word verging on the cliché. I remember a friend casually dismissing an extraordinary novel written by a Malayali living in Saudi Arabia as merely yet another in a genre which he summarised as “oru grihaduratva novel”, a nostalgia novel. Why has this word become so popular? Perhaps, I have reasoned over the years, it reveals the Malayali’s conscious quest to find his place in this world that he may call home. The word’s popularity is merely a consequence of labour emigration into the Gulf which has in turn demanded that the language reflect the reality of perpetual longing.


Like Kalidasa’s Yaksha who was banished to earth, Kerala’s temporary persons too must put in their time in a distant land. When the flight arrives in Dubai, one can see in their fidgetiness and scramble to leave the plane, as if they were eager to be done with this journey so that they could start their other life in these desert capitals as fast as they could, so that they may return home once again. Only to leave yet again

Nowhere does one see the emotional content of this émigré phenomena more viscerally than on planes that take from Kozhikode or Kochi or Thiruvananthapuram to the metropolises of the Arabian Gulf. There is a change of pace which is born from leaving the intrusive warmth of Indian families and heading back to the austere impersonal life in Dubai or elsewhere which produces a sense of disquiet, a feeling of something being amiss. These planes are usually rife with both: the desire to return and the longing for that which is vanishing with each passing kilometre. Amid the smell of perfume and sweat and nervousness, neatly coiffed young mustachioed Malayali men fiddle with their seatbelts, check out the in-flight Malayalam movies and wait patiently for the air hostesses, like penitents in a confession stand, to bring them another little, free plastic bottle of whisky or wine. For those who travel on that route, it is an all too familiar scene. By now, most in Kerala are inured to the charms and horrors of going to the Gulf. These men, and increasingly women too, head into the desert monarchies to work, to live in societies with carefully constructed social hierarchies cleaved on the basis of wealth. All the while, they create enclaves of familiarity. It is a make-believe world with Onam celebrations, Malayalam classes for their children, new cars, illicit love affairs, spousal abuses, expatriate poets, newspapers, cable TV, chitfund scams, political affiliations and visa problems. Like all immigrant efforts to construct a familiar world—be it the Chinese in Singapore, the Gujarati in New Jersey, the Tamil in California, the Sikh in Vancouver, the Turk in Germany, the Puerto Rican in New York—theirs is an effort that is one part mimicry of the world they have left behind and another a last-ditch effort to remain rooted, before their children fly away to North America or Europe to universities and never return. Amid Arabian sands and spires of concrete and glass, they carefully tend to their memory of a green and moist land they left behind.

On one such flight that I took in 2009, the man who sat in the next seat watched me carefully, almost shyly. I smiled at him, and he responded with a grateful grin. Later, when we got talking, he told me that he was hesitant to say hello, because he had seen me read a book in English and had therefore inferred that I probably didn’t speak Malayalam. He was happily surprised to learn otherwise. He told me—all too eagerly, I noticed then—that he worked at the Lulu Hypermarket in Abu Dhabi, where he was an odd-jobs man. He was responsible for stocking up the racks with soaps, sanitary pads, lipsticks and shoes, cleaning up the floors in case something was spilt. His most important responsibility was to bring cash from the manager’s offices to the checkout counter when the cashiers call for it. In his early forties, all this was no doubt hard work. The psychic trauma—to be at the beck and call of everybody—would have accreted in him. Visiting Kerala however was his one reprieve. I was curious to know about the big questions: How was life in Abu Dhabi? How was the justice system there? Did the Arabs treat Indians as equals? All these were silly questions and a stupid way to understand another human being. I treated him as an end to confirm or deny my own worldview, as an informer about the mores of a world that I could only be superficially curious about. In some sense, to my shame, I wasn’t interested in him as a human being, but only as a means to ascertain my own perceptions. No matter what he would have said, I wouldn’t have heard him then. I was listening to the sounds he made, but I wasn’t hearing him.

I realised during the course of our conversation that Dubai may glitter ahead and Abu Dhabi may tantalise, but to him, few places were more interesting than the unremarkable village in Malappuram that he came from. Years later, I realised his could have been the life history of any person, spanning from the Maghreb to Indonesia, from Central America to Mexico—a weary tale of human movements away from home in search of economic security. The planes from Kozhikode, Kochi or Thiruvananthapuram are usually filled with those who head off to toil away in obscure shopping complexes and small establishments across Arabia, even as they carry within what the Icelandic people call söknuour, a generic sense of longing, and heimprá, a longing for home. Like Kalidasa’s Yaksha who was banished to earth, Kerala’s temporary persons too must put in their time in a distant land. When the flight arrives in Dubai, one can see in their fidgetiness and scramble to leave the plane, as if they were eager to be done with this journey so that they could start their other life in these desert capitals as fast as they could, so that they may return home once again. Only to leave yet again. In a way, they are the children of Kalidasa’s Yaksha; only this time, they are stuck inside an infinite loop reliving their separations repeatedly, till one day when they become old or their labours are rendered irrelevant by the forces of technology and globalisation, they must return to a home that is now barely recognisable. Kerala, they’ll discover, has become foreign to them. Only the drone of politicians promising revolutionary change will sound familiar.