The animal is treasured for evolutionary stability 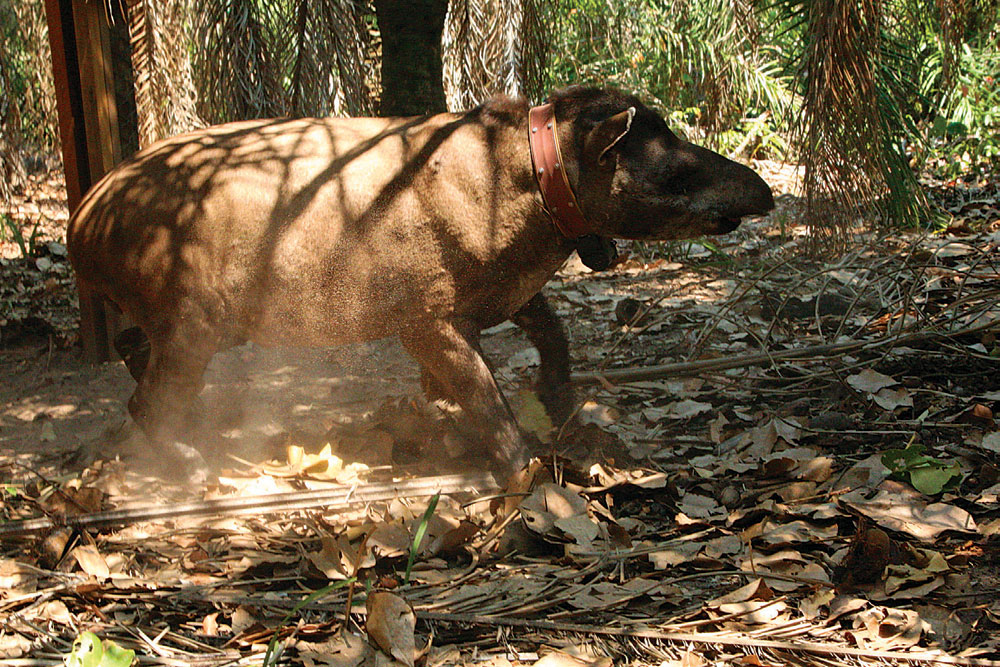 A tapir in the Pantanal region of Brazil (Photo: Vivek Menon)


IT IS INSANE to stand directly in the path of a 500-pound beast. It is suicidal if you continue standing when the animal decides to charge. Luckily, in the throes of that insanity, I had the good sense to choose to stand behind a thin trumpet tree that separated the tranquilised lowland tapir and me. Now, when I say tranquilised, I mean sedated a little under an hour before. Those who know the chemistry of tranquilisation know that the drugs that the veterinarians use to sedate an animal work exactly counter to what a biologist needs. The tranquilisation drug does not work immediately but the revival medicine is almost instantaneous. This means that a darted animal could run in fear and half-crazed by the dart for 10 minutes or even 15 minutes falling asleep many a mile from the darting party. This, then, means groups of biologists and vets either driving after the animals in savannahs or running after the beast in forests hoping that a half-asleep animal does not end up falling into a waterbody and drowning. Au contraire, when Revivon is injected into an animal after the need for sedation is over, the animal stands up rather quickly, making people scatter in all directions. In l’affaire tapir, most of the gathered humanity had climbed trees or were safe in their vehicles further away. I stood behind that slim Caribbean trumpet tree in the hope of getting a photograph of the animal up and looking at me once the drug-induced stupor had worn off. That was part of the reason I was there in the Pantanal looking for tapirs. I had promised Patricia Medici, the Chair of the Tapir Specialist Group, that I would photo-document the whole process of radio-collaring a tapir. With several shots of the tapir in the cage trapped before the operation and of the tapir lying down supine, with the butts of a dozen veterinarians and biologists crowding the fallen animal, it was time to get the real McCoy—a shot of a standing tapir, nicely collared and freshened up to go. The tapir, largely unchanged evolutionarily from the Eocene, had other ideas in its primeval brain.

Standing up groggily, it felt the unknown weight of the collar on its neck. No animal likes the idea of a restraining harness and like a bull with his first yoke, a stallion with his virginal saddle or an elephant with a riding pad on its back, the tapir revolted. He stretched forward first and with his porcine nose pointing skyward, shook his head violently trying to rid himself of the burden. He then snorted, a sort of sound that I was familiar with rhinos making in the grasslands of Kazirangas. Tapirs are perissodactyls and thus closely related to rhinos and the sound should not have surprised me, but it did. It was probably the proximity of the noise, a basal exhalation of air that warned of far greater direness in store. He then swivelled around to face me and stomped his right foot into the Pantanal earth, sending a fine cloud of dust onto the intervening space between me and the charge. For charge he did, now snorting, stomping and lunging all at once. The dust around him meant I could merely sense a cloud of dust approaching me at the rate of knots. For a millisecond, for it could not have lasted more, my heart stopped on me, a minor arrhythmia in the larger scheme of things. And the larger scheme of things was upon me now brushing past my left shoulder with the thudding of his gargantuan hooves echoing in my ears, growing softer, then fainter and finally silent as the beast disappeared into the Brazilian yonder. In that brain-numbing, heart-freezing chill of a tapir charge, I had managed to click that one picture that I had promised Patricia.

Tapirs are fascinating creatures for the ecologist, the evolutionary biologist and me. To my defence, I must say that while the ecological and evolutionary standpoints to their importance rather overshadows my reasoning, my fascination started at a young age when such scholarly reasons were yet to be ascertained. I was fascinated by its nose. Not just the tapir nose, but that of the elephant, the saiga, the proboscis monkey, anything that hung down in a pendulous blob or was stretched into an impossible hose. It was a young boy’s innate wonderment at the genius of nature; of creating an appendage of equal use to all those beings but in such a fascinating array of form and shape. For ages, from as far back as I remember, I had wanted to touch the noses of these wonderful beasts. The elephant was the easiest as it is kept captive throughout India and I had several opportunities to touch and feel the trunk. A saiga I had managed through the bars of a captive facility in the Buddhist enclave of Kalmykia on the Russian steppe. Now remained the tapir and the proboscis monkey.

Let us for a moment step back from the nose and consider the whole beast. Tapirs are perissodactyls or ungulates that have an odd number of toes fused into a hoof. In contrast, deer, antelope, cows or goats have an even number of toes. The tapir functionally has three toes on each foot although on the back foot there is another small vestigial toe. It shares this anatomical peculiarity with horses, asses and rhinos. And possibly of all these animals, it is the rhino that it resembles the most, for at one glance it can look like a small rhino without a horn. It is a bulky creature, and the Malayan tapir, one of four species that is left of the kind on earth, can tip the scales at over 350 kg. That is about the weight of a bull moose, the largest deer species in the world. It can also be over six feet in length and half that in height. Evolutionary biologists like the tapirs because of their size and their discontinuous distribution. Being big, they tend to leave fossils that are easy to study and being discontinuous in their distribution, they leave a puzzle for the biologists to solve. In 1889, the naturalist Wallace living in the steaming tropics of Sarawak wrote in his book Darwinism: ‘These curious animals form one of the puzzles of geographical distribution. Without any hypothetical bridging of deep oceans, and with only such changes of sea and land as are indicated by the extent of the comparatively shallow seas surrounding and connecting the existing continents, we are able to account for the anomaly of allied forms occurring only in remote and widely separated areas.’ The puzzle is because the species are not continuously distributed in the world. The Malayan tapir is found in the tropical forests of Southeast Asia while the other three are Latin American in distribution. This means one of two things. Either the animal originated in one of these places and travelled to the other leaving no relatives behind or else they were continuous in distribution once and their relatives went extinct in the intervening spaces. The latter is the currently agreed upon hypothesis. The fossil of a small horse-like tapir Heptadon from the western US is considered the oldest ancestor of the modern tapir from where it spread all the way south to Argentina and east to Malaysia! But even more interesting is the fact that at both ends of its range, it remained relatively unchanged in form and structure (other than an increase in size) since the Eocene and also retained the same diet and thus the habit of being a tropical forest animal. So dependent is it on tropical forests that scientists have now co-related the changes in tropical forest patches across the aeons looking at tapir fossil distribution across the same periods. Unlike Darwinian finches, which allowed the great scientist to postulate the hypotheses of evolution because of rapid changes accumulated in one group of birds in the Galapagos, the tapirs are the kings of the slow lane and treasured for the evolutionary stability they bring to science.

However, like the rhino, there are only a few tapir species left in this world: only four. There may be only 5,000 Baird’s tapir left in Central America and probably half that number of the Mountain tapir left in the Andes. There are even fewer Malayan tapir in Malaysia, perhaps as few as 2,000 surviving. The lowland tapir, which charged me in the Pantanal, may be the most common of the species but no population figures are available for it. As a group of beings, they all seem as threatened as one would expect a tropical forest-obligate species to be. With their habitat under threat of the chainsaw and the plough, the species is pocketed in smaller and smaller forest fragments.

In the Pantanal, peace was returning to the Baia das Pedras. A yellow-rumped cacique screeched in the distance. A flock of saffron finches flew prettily off a neighbouring tree. The team was emerging from the distance to take a celebratory group photo near the tapir trap. The radio-collaring meant that this core group of scientists could learn a little more about this tapir, his peregrinations and perhaps even his social life. “Wow!” Patricia said having seen the charge, “I think we should call the tapir Vivek!” Ever since Jane Goodall named her chimps in Gombe in the ’60s, it has been considered alright for biologists to give human names to animals. Scientists find it easier to remember them rather than when calling them T1 and T2. It also makes telling their story to the world a little easier and more fun. But calling a Brazilian tapir Jorge or Juan sounded so much more appropriate than by an Indian name.
Patricia however was adamant and ‘Vivek’ as a name stuck. She continued to keep me informed over the years about my namesake. ‘He mated with Morena’ she wrote to me recently ‘and had a son Moreninho in 2013, a daughter Carminha in 2014, another son Cuzi in 2016 who , cross your fingers, has a girlfriend Valentina as of now.’ Sitting in the dry heat of Delhi, 14,750 km away from the Pantanal, I dream of the day I was charged , ever so fleetingly, but oh so hauntingly, by a tapir named Vivek.