‘A Symbol of India’s Composite Culture’

AMU at 100 through the lens of Narendra Modi’s speech 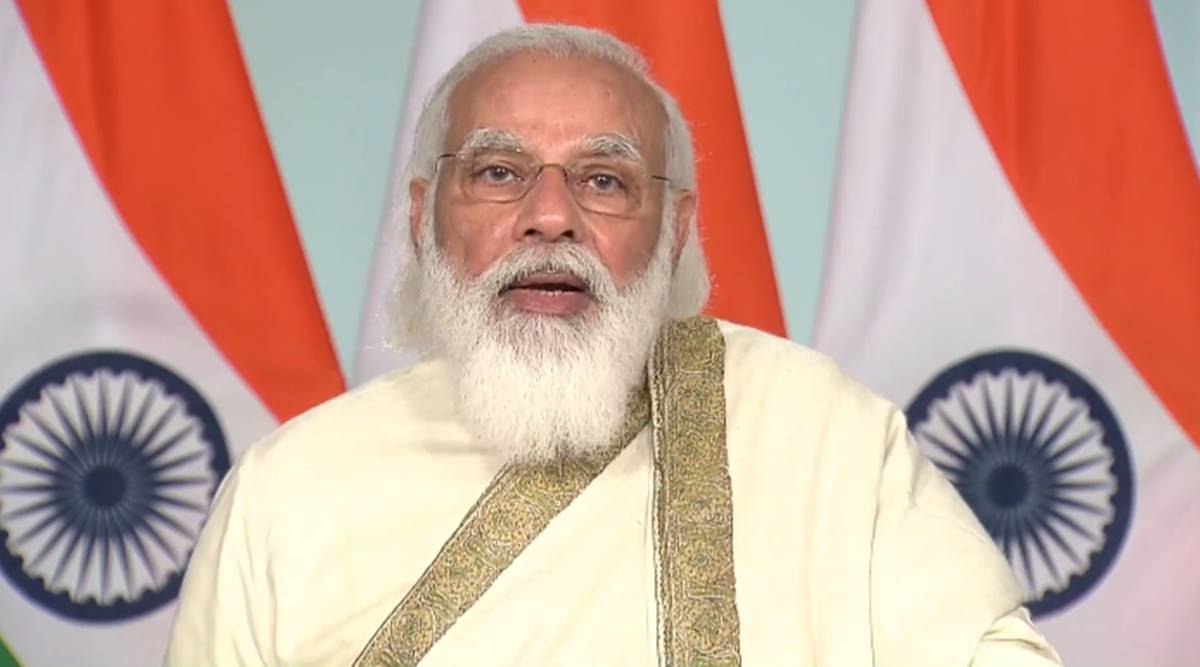 AMU came into existence on December 1st, 1920, and the inaugural ceremony was held on December 17th, 1920, in the wake of the Non-Cooperation Movement. The prime minister chose this landmark occasion to speak not only to the largest academic institution in India, but also to the Indian Muslim community and Indian Muslims living abroad. Clearly, the message of his speech transcended the portals of AMU.

The enduring value of the glowing tributes paid by the Prime Minister to AMU for its contribution to nation-building is the acknowledgment that AMU is the pulse of the Indian Muslim community for its historical and contemporary importance. In essence, it is in line with the spirit of Section 5 (2) (c) of the AMU Act, 1920, that enjoins upon AMU the responsibility ‘to promote, especially the educational and cultural advancement of the Muslims of India.’ Today, as per official figures, the Muslims are at the lowest rung of the education and socio-economic ladder of India. They need the support of the state and various agencies for their uplift. AMU offers unstinted support in achieving this goal in accordance with Section 5 (2) (c) of the AMU Act, 1920.

The prime minister laid out a vision emphasising coordination for <Atmanirbharta>, national integration, women’s education, soft power dividend, preservation of cultural heritage and equality of opportunity, while de-emphasising divergences, political and ideological. Through this vision, he celebrated the role of the AMU community.

The prime minister also paid glowing tributes to AMU for its contribution to nation-building. By labelling AMU as a “mini India”, the prime minister etched the university as a microcosm of the Indian society and a unique symbol of India’s composite culture—where for centuries, despite many diversities, we are living as a people in unity and oneness.

“One can see a mini India here that comprises several departments, dozens of hostels, thousands of teachers, and lakhs of students. AMU teaches Urdu on one side and Hindi on the other. Also, Arabic is taught, so is Sanskrit education. Here, the library has copies of the Quran and the translations of the Gita and Ramayana have been preserved with the same care. Diversity is not only a prestigious trait of AMU, but also the strength of the country. We must not forget this power, nor allow it to weaken it. The spirit of one India—superior India on the AMU campus keeps getting stronger day by day, we have to work together for this…,” said the prime minister.

By addressing the constituents of the AMU community as ‘proud Aligs’—a folklore expression for the AMU alumni—the prime minister resonated a sense of pride and bonding associated with being a part of the Alig community. Not surprisingly, his speech has been by and large received positively, including by some critics, and endeared itself to the AMU fraternity not just in India, but throughout the world.

Equally important was the prime minister’s exhortation to the AMU alumni forming the Indian diaspora—to leverage the ‘soft power dividend’ of AMU in its outreach to further invigorate India’s cultural relations with the Islamic world. For its ‘soft power dividend’, AMU is recognised as an ‘Institution of National Importance’ under the Seventh Schedule of the Constitution of India. The prime minister recognised and acknowledged the productive role and potential of AMU in fostering better ties with the Islamic states. He said, “In the last 100 years, AMU has also worked to strengthen India’s relations with many countries of the world. The research done here on Urdu, Arabic and Persian languages, research on Islamic literature, gives new energy to India’s cultural relations with the entire Islamic world. I have been told that right now about one-thousand foreign students are studying here. In such a situation, it is also the responsibility of AMU that these students go to their countries by carrying what is good in our country, what is best, what is the strength of the country. Because what they experience at AMU, they will connect with the Indian identity. So your institution has a double responsibility—to enhance your respect and fulfil your responsibility.”

AMU is a vehicle for engendering modern thinking for Muslims in India based on the bedrock of gender equality, faith equality, economic equity and freedom of thought—a fact recognised by dignitaries and heads of states who have visited AMU over the years. Especially after Independence, for dignitaries and heads of states of Islamic countries visiting India, AMU was almost invariably a regular on their itinerary. Reciprocating this gesture, AMU conferred D.Litt degrees (Honoris Causa) on many of them.

AMU alumni have also gone on to serve in the highest offices of Islamic countries—Mohamed Amin Didi as president of the Maldives, Muhammad Mansur Ali as prime minister of Bangladesh, Fazle Ilahi Chowdhri and Mohammad Ayub Khan as presidents of Pakistan—apart from chief justices, judges and gubernatorial assignment for others.

In the past six-and-a-half years, the prime minister has given his personal imprint in India’s assiduous outreach towards strengthening about the 5,000-year-old civilisational relations with the Gulf countries—relations which have never been rooted on issues of religion, but on trust, mutual respect, commerce, kinship and culture. Resultantly, these efforts have culminated into new benchmarks for the relations in the spheres of economy, regional security, and most importantly, strategic issues. Notably, Saudi Arabia and the UAE have proposed to invest substantially in India, totalling up to $170 billion collectively, to augment India’s infrastructure, energy and industrial sectors, with the ball set rolling already in some projects. In a post-pandemic economic slowdown, the importance of such concrete outcomes cannot be overemphasised. With a belligerent China in the neighbourhood, the axis of India-US-Gulf assumes immense strategic significance.

As a mark of gratitude for the prime minister’s personal imprint in these efforts, in the past four years, three West Asian countries—Saudi Arabia, UAE and Bahrain—have reciprocated their gratitude to the Prime Minister by conferring on him their highest civilian awards.

A nation’s foreign policy is an extension of its national interest, and the national interest is encapsulated in its vision for peace and prosperity. On the eve of its centenary, the Aligarh Muslim University takes immense pride for having been a part of this matrix. We urge the Government to continue to make use of the ‘soft power dividend’ of AMU for making outreach to the Islamic world.

The prime minister also commended the nationalistic credentials of AMU’s illustrious founder, Sir Syed Ahmad Khan with certitude. Quoting Sir Syed Ahmad Khan while stressing on the ‘nation first’ principle, the prime minister said, “I would like to remind you of one thing said by Sir Syed. He had said, ‘The first and foremost duty of one who is concerned about his country is to work for the welfare of all people, irrespective of the caste, creed or religion of the people.’ Sir Syed had also given an example while elaborating it. He had said, ‘Just as each part of the body is necessary for good health, development at all levels is essential for the prosperity of the country.’”

AMU evolved out of the Muhammadan Anglo-Oriental (MAO) College which was set up by Sir Syed in 1877, and this college was upgraded to AMU in 1920 after passage of Act by the Central Legislative Council. Sir Syed conceived the university as ‘Oxford of the East’—with a vision to extricate the traumatised post-1857 Muslim community from the meshes of medieval traditionalism, to inculcate in them a scientific temper and to equip them with modern education. In the history of India’s transition from medievalism to modernism, the salience of Sir Syed’s contribution lies on two counts. One, in effecting ‘pain as a catalyst for transformation’. Two, striving to work on an intellectual agenda in which political exigencies and progress should not be impeded by emotional idealism.

Sir Syed Ahmad Khan was so depressed by the events of 1857 that he contemplated settling down in Egypt. But he dismissed exile as cowardice and turned to a programme of reform and education for the Muslims, urging them to acquire intellectual merits that had made the British victorious and modern scientific temperament and versatility in the English language. This would restore the glory they had lost with the decline of Mughal power. Sir Syed was devoted to lifting Indian Muslims out of what he described, a “fatal shroud of complacent self-esteem”.

During Sir Syed’s own lifetime, The Englishman, a renowned British newspaper of the 19th century, remarked in a commentary on November 17th, 1885, ‘Sir Syed’s life “strikingly illustrated one of the best phases of modern history.”’

True to this spirit, AMU has been following nationalistic ideals espoused by its founder, and its portals have always remained open to all, without discrimination, irrespective of religion, caste or creed. It produced great freedom fighters like Khan Abdul Ghaffar Khan, Maulana Mohammad Ali Jauhar, Shaukat Ali, Hasrat Mohani, Rafi Ahmed Kidwai, KP Paliwal, Saifuddin Kitchloo and Dr Zakir Husain. An illustrious alumnus of MAO College, Raja Mahendra Pratap, was the first stalwart who had established a government-in-exile in Kabul with Maulavi Barkatullah as its prime minister.

The prime minister also lauded the university for doing commendable work in the battle against the Covid pandemic. So far, it has conducted more than 2 lakh RT-PCR tests in the university’s medical college. An amount of Rs 1 crore and 40 lakh was contributed by the employees of AMU to the PM CARES Fund, which is the highest among all educational institutions. The phase 3 trials of the indigenous Covid vaccine, Covaxin, developed by Bharat Biotech and ICMR, were undertaken in the medical college.

According to Section 5 (2) (b), the university is conferred with the mission to promote the study of religions, civilisation and culture of India. In 2020, AMU strengthened its traditional quest for inter-faith harmony through the newly established Dara Shikoh Centre for Interfaith Understanding and Dialogue. The naming of this centre after Dara Shikoh bears significance as he is widely considered to be the founder of the academic movement in Bharat for interfaith understanding. His translation of Hindu religious scriptures to search commonalities in Hinduism and Islam is pioneering. While history may not have given Dara Shikoh his due, AMU has initiated the task of course correction by launching this project to popularise the legacy of Dara Shikoh.

While drawing inspiration from the glorious last 100 years, AMU will remain steadfast in its commitment for a better India tomorrow.

‘A Symbol of India’s Composite Culture’