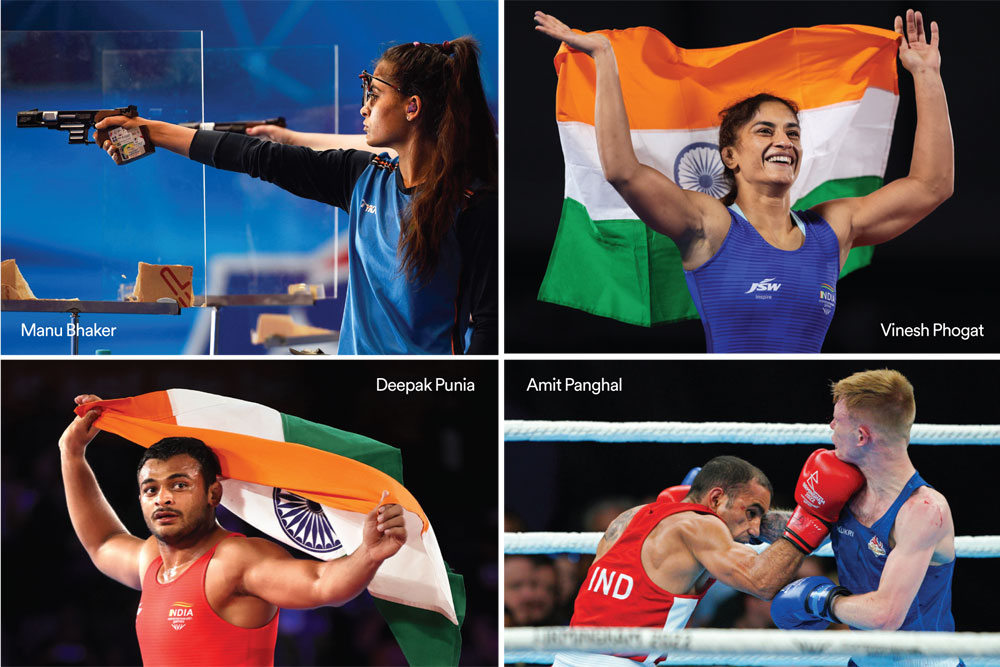 
AS WE CELEBRATE 75 years of independence, the question I asked myself is what does freedom really stand for as far as each one of us are concerned? In one sentence, it stands for a society that is sensitive and has a conscience. A society that is empathetic and cares. And in my case with my investment in sport, I would want to judge society through the prism of sport. If we take the Tokyo Olympics as a case study for example. For the first time, India had sent a contingent of 126 athletes. By Indian standards this was a pretty big contingent and shows progress in sport. Each one of these athletes had qualified for the Olympics and that in itself was no mean feat. However, of the 126 men and women who went to Tokyo, six individuals won medals as also the hockey team, which consists of another 16 players. Add to this list Aditi Ashok and the hockey girls, 16 of them, who were celebrated across the country for their heroics. This means, of the 126 athletes some 40 were in the news and were lauded and honoured.

The same holds true for the Commonwealth Games (CWG). Out of a contingent of 200-plus, a fourth of them won medals with India finishing with a haul of 61 medals, including 22 golds. While this is India’s best performance in the absence of shooting and archery, we have seen comments across social media trying to devalue the effort, saying CWG is not a competition of much relevance.

Going back to Tokyo, what about the rest of the 86 athletes who did not win medals? Where are they and how did they cope with failure? What about their mental health and how are they dealing with depression? While we celebrated Simone Biles for speaking out on issues of mental health, what about our own athletes? Take the case of 19-year-old Manu Bhaker. She was viciously trolled for not winning a medal. First, she qualified for the games based on her own merit and had never promised anyone that she would win a medal. No question, Manu would be the most distraught that she didn’t win. Have we tried to find out what she was going through? Was she coping well? Is she depressed? Today’s vanquished are tomorrow’s victors and, make no mistake, Manu Bhaker is a rare talent. She even spoke out on shooting’s non-inclusion in CWG and yet again was trolled. Unless we as a society are able to take care of the men and women who did not win, we can never get better as a nation. The same applies for Vinesh Phogat who most recently spoke to me at length in Birmingham about what she was going through. Not winning a medal, Vinesh says, is almost a crime in the manner she was being treated. “In our country, people decide that you are no good in just one day. If you don’t win an Olympic medal it means you are a waste. So what if you have spent 10 years to get there. So what if you have won multiple international medals. In that one day, you lose everything,” said Vinesh.

May I also bring to light the cases of Amit Panghal and Deepak Punia? A bronze medal, we now know, fetches the winner close to `10 crore in our country. The money, with the many other honours that come your way, sets you up for life. This is an amount of money that no more than 1 per cent of us in India earn in all their life. Deepak Punia, for the record, was within 10 seconds of winning the medal. Ten seconds. That’s how close he was and he is just 22 years old. Where was Deepak and what was he doing soon after Tokyo? Yes, we now know where he is because he has won the CWG gold. A close look at his fight at the Olympics reveals other things as well. Deepak, it can be said, was justifiably unlucky. There was an occasion in the fight where he was almost there to have won two valuable points. With wrestling and boxing being really subjective sports where much depends on the judges, Deepak was denied the points and then in the last few seconds the tide turned against him. In sum, it was the most unfortunate way to lose a medal. Hardly anyone spoke of Deepak until his CWG win when all of a sudden the talk was about his resilience and mental strength. When the women’s hockey team was being celebrated the country over for a fourth-place finish and Aditi Ashok was being said to have ushered in a revolution in golf, make no mistake, Deepak must have felt a sense of helplessness. He was so close, and yet so far.

Now, to Amit Panghal. Ahead of the Olympics, he was one of our best medal hopes. Asian Games champion and world championship medal winner, Amit is a boxer of pedigree and was someone the entire country was banking on. In Tokyo, Amit was stellar in the first round of his pre-quarter final, winning it 4-1 only to completely lose it in the next two rounds. Why? While we heard his coach say he was tired, it doesn’t really sound plausible, does it? Why should your best boxer get tired in three minutes on the world’s greatest stage of all? What really happened with Amit Panghal? Is there a story that we don’t really know and will Amit ever open up and tell us what really happened? The grapevine has it that his diet was all messed up. The question is why. Why would he not have his diet all worked out based on sport science? Are we missing something here?


Respect—that’s what we need to inculcate for our athletes and it can’t be respect only for the winners and scorn for the rest. This is what explains why many of our past athletes have had to live lives in penury seeking out favours and doles. No one who has represented the country deserves this

Amit has now won gold at CWG and, even after winning, he wasn’t willing to open up on Tokyo. It remains a scar. It can only heal if he wins a medal in Paris and may be only then will we know the real story.

The point I wish to make is that we as a society needed to know about all of the 86 men and women who weren’t being talked about in the country. They were as important as the medal winners and this horrible Indian habit of honouring only the victors and overlooking the vanquished has to stop once and for all. If only we are able to shun this habit, can we aspire to be a multi-sporting nation that loves its sports. Respect—that’s what we need to inculcate for our athletes and it can’t be respect only for the winners and scorn for the rest. This is what explains why many of our past athletes have had to live lives in penury seeking out favours and doles. No one who has represented the country deserves this. That’s what we need to acknowledge in our Independence Day week and promise ourselves not to repeat these mistakes in future. We as a society need to turn more respectful and gracious. We need to celebrate people for the effort they have put in and not simply celebrate those who are successful. That’s what will make us a better country and that’s what I dream of.