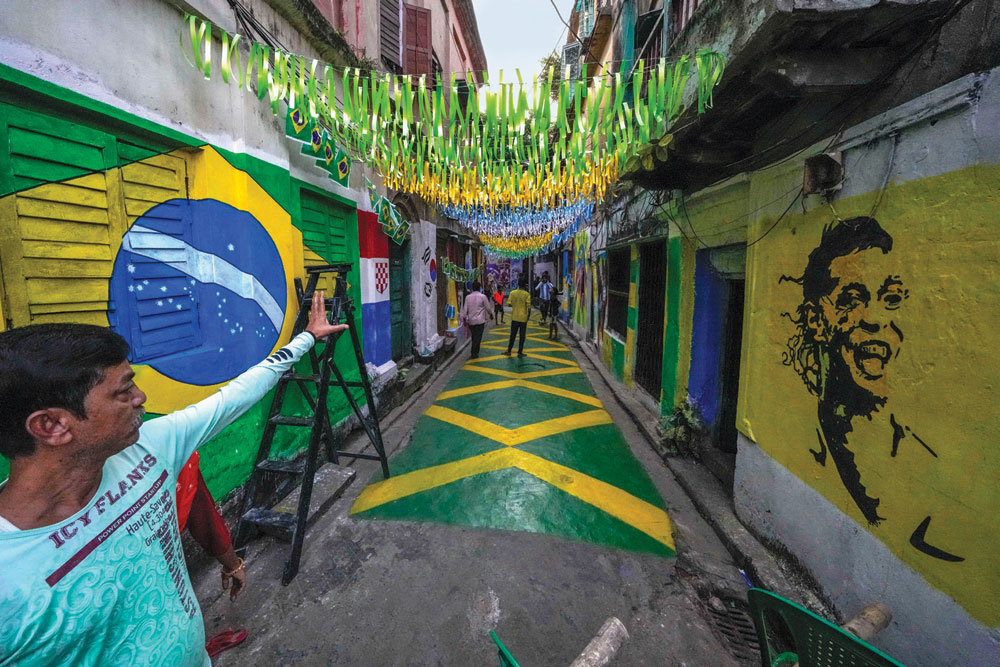 
A DRIVE FROM NORTH to South Kolkata and almost every bylane has a Brazil flag. It is almost like the election season when flags and graffiti of rival parties adorn the streets of the city. Kolkata, during the next month, is a subcontinental Brazilian colony. It is either Brazil or Argentina. Messi or Neymar. A Brazilian win is celebrated as our own and a de­feat casts a shadow of despair over the masses of football fans. While these things are a given, the question is: Why? Why is it Brazil and Argentina and not, say, Germany or Spain? Or even France or England?

Brazilian football, traditionally a working-class sport, is something the masses in Kolkata can identify with. Unlike Europe, where football is a full-fledged industry and acad­emies and schools oversee the nurturing of talent, in both Brazil and Kolkata, given their economic conditions, such infrastructure is unthinkable. Unlike European stars— products of a sophisticated football nurturing system— Brazilian stars learn by playing in the streets and local parks and, in most cases, make their way to the top by rely­ing on exceptional talent alone. Scientific training, prop­er diet, and systematic physical drills, part of the European footballing experience, have made Europe alien to most countries of South Asia. By contrast, Brazilian football in­volves skill, stamina, and passion, attributes the working classes in Kolkata possess. With most Brazilian stars, who soar from lower middle-class households to become world icons, the poor, underprivileged young man in Kolkata, in attempting to emulate them, can still dream of conquering the world with his limbs alone. This explains why Prasun Bhattacharya, the poor, hard-working, small-town boy in the much-acclaimed Moti Nandi novel Striker dreams about the secretary of the Santos Football Club offering him a contract, having come all the way from Brazil to his dingy urban house. This novel, published in 1973, a peri­od when world football was being ruled by the Dutch un­der Cruyff and by the Germans under Beckenbauer, could have easily portrayed Bhattacharya dreaming of playing in a Dutch or German club. However, given the structure of football in Europe, such dreams are a remote possibility. With his background, having had the privilege of watch­ing the legendary Brazilians of the 1950s and 1960s in ac­tion, it was “natural” for Moti Nandi to write about his hero dreaming of playing in a Brazilian football club.


Moti Nandi’s reverence for Brazilian soccer is borne out by the opening pages of the novel. It opens with Prasun Bhattacharya, an aspiring young footballer, describing a dream he had the previous night. In his dream he had seen a middle-aged foreigner, wearing a white coat and trousers, stepping out of a limousine parked on the main road near his small-town house. Residents of his locality had nev­er seen a limousine before. Accordingly, a crowd had gath­ered to see the car and gauge the reason behind the coming of the foreigner. When it became known that he had come to see Prasun, most people were stunned and at the same time happy to hear a local name on the foreigner’s lips. The Brazilian, when asked what he wanted, mentioned that he was the secretary of the Santos Football Club and an­nounced his intention to sign Prasun to play for the club in the coming season. Upon hearing this, one of the residents rushed in to inform Prasun’s father about the offer, excited that the foreigner represented the club for which Pelé had played. Pelé is revered in this novel—proof enough of the iconic status this living legend enjoys in Bengal, and his power to extract adulation for his nation.

The best footballer to play in Kolkata, Pelé had done much to stimulate the city’s adulation for Brazil. He had played in the city in 1977, as a member of the touring New York Cosmos. Though well past his prime, the nature of the reception accorded to Pelé and the frenzy that had gripped the soccer-crazy city on this occasion is proof of the rever­ence Kolkatans have for Brazilian soccer. The Anandabazar Patrika of September 23, 1977 described the visit thus: “Not merely as a king, but Kolkata has welcomed Pelé like a vic­torious emperor. Millions had stepped onto the streets to catch a glimpse of this legend at midnight on Thursday. Never before in this great city has such a crowd assembled as midnight to welcome a foreigner.”

The city will be rooting for Neymar and Tite as Brazil take the field in Qatar trying to win a record sixth title. And if they do, we could well see a repeat of what happened in Kolkata when Brazil won the title in 2002

The heading of the report, ‘Frenzied millions accord roy­al welcome’, is indicative of the hysteria that had gripped the city. This visit of Pelé, one that had left a lasting im­pression on the city’s people, had done much to intensi­fy the city’s adulation for Brazilian soccer. The visit made Pelé a household name in Kolkata, making him someone Kolkatans could identify with as one of their own. Even women, not particularly keen on soccer, had become fans of Pelé, reading about him regularly in the sport pages of the vernacular dailies. They did much to stimulate support for Brazil by transmitting stories of Pelé’s visit to their chil­dren, moulding their young minds in favour of Brazil. Pelé’s visit was followed in the 1980s by the visit of the São Paolo Football Club, a visit that generated considerable excite­ment and kept Brazil in the hearts and minds of Kolkatans.

The live telecast of the 1982 World Cup Football fi­nals also played its part in advancing Brazil in the eyes of Kolkatans. Held just a few years after Pelé’s visit, this World Cup final was the first sporting event televised live in India. After their tryst with Pelé, fans in Kolkata were rooting for Brazil, expecting something spectacular from their fa­vourite footballing power. The Brazilian team boasting Sócrates, Zico and Falcão did not disappoint them and de­spite their second-round loss to Italy, is still regarded as one of the best Brazilian teams of all time.

It is no surprise then that the city will be rooting for Neymar and Tite as Brazil take field in Qatar trying to win a record sixth title. And if they do, we could well see a repeat of what happened in Kolkata when Brazil won the title in 2002. This is how the victory was reported in the Kolkata press the next day!

“India didn’t play in the World Cup. But they won it on Sunday night on the streets of Kolkata. ‘Bra..aazil’—some sang, others shouted and still others hugged friends in de­light. One man—a wizard called Ronaldo—had made their day. Kolkata celebrated Brazil’s record-breaking fifth World Cup victory as if there was no tomorrow, liv­ing up to its reputation of being a true soccer-crazy city. Their faces painted yellow and green, men and women danced on the aisles and on the streets in unmitigated glee. From Netaji Indoor Stadium, where thousands watched the match on a giant screen to Bosepukur, Sealdah, Bhowanipore and Rash Behari, the Samba kings ruled. ‘Jai bolo guru Ronaldo holo boss’ (Hail Ronaldo, he is the king) said a woman who came to sell muri-badam outside the sta­dium. Kolkata’s love for Brazil was inexplicable but ubiq­uitous. Without exception, the two sexes stood in uni­son saluting the best team in the world. For the moment, Kolkata had become the second capital of Brazil.”