There is now speculation that Nitish Kumar is again planning to change his political alignment and laying the ground to distance himself from BJP for the 2024 General Election. 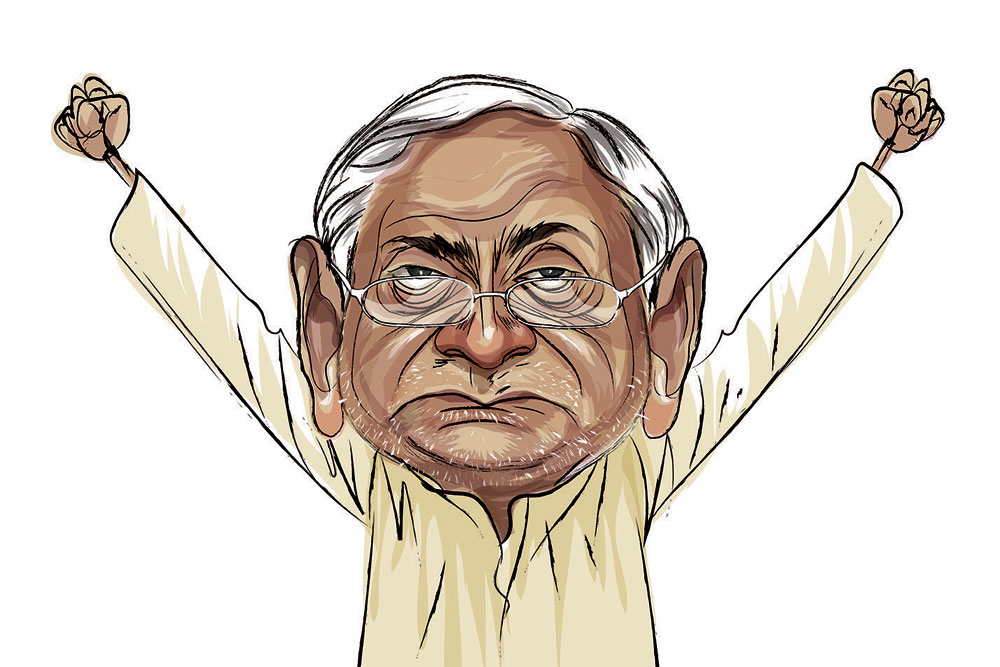 
Bihar Chief Minister Nitish Kumar runs his present government in alliance with the Bharatiya Janata Party (BJP), a relationship in which special status for the state is a prickly point. In 2015, he demanded it for Bihar but BJP, in opposition then, didn’t give it. In 2017, he allied with them and toned down on the issue. But now, he has restarted the campaign for special status. Before this, he had again gone against the BJP line on conducting the caste census. There is now speculation that he is again planning to change his political alignment and laying the ground to distance himself from BJP for the 2024 General Election.

Mukesh Sahani, a minister in the Bihar government, leads a small party called Vikassheel Insaan Party, which has four MLAs. His numbers may be few, but it is important to keep the government stable. He is now trying to gain some ground in Uttar Pradesh and wants BJP to give his party a few seats for the coming election. But BJP is reluctant and that could lead to him creating trouble in Bihar where the government has a thin majority. Without his four MLAs, it becomes considerably less secure. BJP circles say that he has no influence in UP and there is no reason to give him anything there.

IN MAHARASHTRA, THE Brihanmumbai Municipal Corporation elections are knocking at the door, and Shiv Sena has decided to only ally with the Nationalist Congress Party (NCP) and not Congress. Which means that the state government, where Congress is a coalition partner, might get shaky. Shiv Sena is possibly distancing itself from Congress because it wants to ratchet up Hindutva for the civic election to counter BJP. This is something they know Congress can’t tolerate and so it is better to keep them away. For Congress, going it alone is going to be a disaster. Rahul Gandhi is planning to go to Mumbai and meet Sena chief Uddhav Thackeray. Earlier, Sena leader Sanjay Raut met both Sonia and Rahul Gandhi in Delhi. So, the possibility of the ice melting is there. Sena, meanwhile, also has a proposal to ally with Congress in the UP election, but that could lead to the latter losing Muslim votes.

Rahul Gandhi recently asked for Hindu rule instead of Hindutva, trying to make a demarcation between the two. Many are asking why he chose such a debate at this moment. They feel that the campaign against Narendra Modi should focus on price rise and economy. It is possible Rahul’s statement was to counter Modi’s Varanasi visit. Priyanka Gandhi at a rally in Rajasthan, meanwhile, focused on the economic slide. The Congress problem of not having a consistent line against BJP continues.

NARENDRA MODI MANAGED to convert the inauguration of the Kashi Vishwanath corridor into a major national talking point. The opposition thinks that this is an electoral strategy, but work on the corridor began soon after Modi became a Member of Parliament from there. It was a huge task that included the removal of old havelis, shifting of several unauthorised temples and convincing a lot of locals to cooperate. Many leaders in the opposition also countered the project. BJP’s focus, meanwhile, will remain on Kashi for a few more months, until the election, given its importance to Hindus.

SEVERAL INDIAN STATES have withdrawn the general consent that allows the Central Bureau of Investigation to probe cases in their jurisdiction. The Centre is now starting a dialogue with states to come up with a solution. As of now, they are getting consent of the states on a case-to-case basis.

After Meghalaya, there is a split in Congress in the Union territory of Jammu and Kashmir. About 20 leaders, possibly because of the manner in which the party treated Ghulam Nabi Azad, have joined BJP. No MLAs have left, but Congress is worried some may follow.

THERE ARE RUMOURS about actress Kangana Ranaut taking the plunge to active politics. She has for some time become very active commenting on issues related to Hindu sentiment. She recently visited Vrindavan and Mathura and spent a day of worship there. Immediately, there was speculation that she would be BJP’s next Lok Sabha candidate from Mathura. Hema Malini, who is the current MP from Mathura, has already announced that she will not be contesting again.

NARENDRA MODI HAS a personal history with Ramakrishna Mission. As a young man, he wanted to be a monk under their auspices, and even stayed in their Rajkot ashram for a while. Now, Belur Math, the headquarters of the Mission near Kolkata, is planning to mark the Mission’s 125th year in May 2022, and Modi wants to do it with bigger fanfare. The Ministry of Culture contacted Belur Math and requested it to send a programme that they could promote across the country. There would be events in different places. A committee led by Home Minister Amit Shah would oversee it.