Where we sit and how we sit reveal who we are 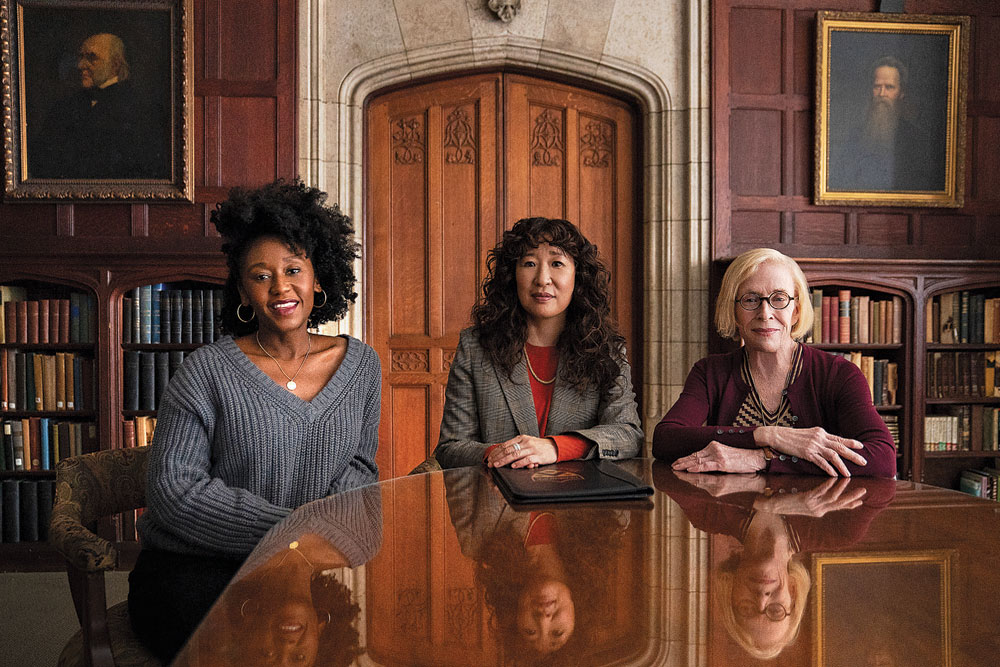 
THE CHAIR, A recent show on Netflix, opens with the actor Sandra Oh driving her car into a snowclad campus. With Vivaldi’s hymn ‘Gloria’ rising to a crescendo in the background, she walks past shelves of books, important looking white men in gilt frames, up wooden stairs with carved balustrades and stops at a door that reads—“Dr. Ji-Yoon Kim, Chair/ Department of English.” A smile escapes her lips. The ornate setting reinforces the importance of her title and job.

Set in the fictional Pembroke University the show tells of the many travails of Dr Kim, who is the first “woman chair” (not “lady chair” as a codger is reminded) of the department. The show succeeds at being delightful and poignant at the same time as it unpacks various campus issues: from the generation gap between today’s woke millennials and their Chaucer-spouting professors, to the many faces of motherhood and fatherhood, to the limits of freedom of speech and cancel culture.

The show’s title also highlights its theme. The word ‘chairman’ has (thankfully) fallen out of vogue. While its use peaked in the 1950s it has seen a steady decline since the ’80s, which is clearly mapped by the Google Book Search algorithm. By 2018, the word was rendered redundant. The word ‘chairman’ presupposes that the head of an organisation is male. ‘Chair’ severs that connection with gender and embraces all possibilities. The Chair reinforces that the person who presides over the table and who heads a department or organisation can very easily be a woman. Although to naysayers, gender-neutral words might seem like mere wordplay, it is vital for a more equal vocabulary envisions a more equal future.

In the opening scene, Dr Kim sits on her chair, surveys her room, appreciates her views, rests her arms on the arm rests, leans back. In that moment the chair snaps. She tumbles to the floor. The first phrase the audience hears her utter as she thuds to the floor is “What the fuck”. The collapse of the chair in the first few minutes of the show tells us that if the chair is rotten, so is the state.

In north India, “kursi” is synonymous with the state. The 1977 Hindi movie Kissa Kursi Ka, directed by Amrit Nahata, was a satire which in a barely veiled manner told of the politics of Indira Gandhi and her son Sanjay Gandhi. It was promptly banned by the Indian Government during Emergency and all prints were confiscated. In the movie Shabana Azmi, named Janta, plays the role of the public. In a scene available on YouTube she stands with a sweet inert smile on her face holding out a garland to the man who has the kursi, the politician Gangaram or Gangu, played by Manohar Singh, who has just risen from his seat in Parliament. Those who sit in the chair, expect garlands not questions, they want fans and not citizens.

In the book Now I Sit Me Down: From Klismos to Plastic Chair: A Natural History (2016), the author Witold Rybczynski asserts, “The world is divided into people who sit on the floor and those who sit on chairs.” Rybczynski’s thesis reminds me of an anecdote a friend from Assam recounted during the early days of the pandemic. An elderly woman living in a village just outside Guwahati told her, “We people don’t get this disease. Only people who sit in chairs get it.”

In India, sitting in chairs is not just a question of choice and comfort, instead it speaks of hierarchy. It differentiates rural from urban, affluent from less affluent. Most urbane folks (unless they are of the yoga ilk) cannot sit on their haunches for long. And one just needs to turn to labourers and farmers to see how they’d choose sitting on their haunches over even sitting crosslegged. For the elderly Assamese woman the world was divided into two, those who sat in chairs and those who didn’t. Those who sat in chairs were exposed to ‘foreign’ viruses that felled plane travellers and border crossers.


The word ‘Chairman’ presupposes that the head of an organisation is male. ‘Chair’ severs that connection with gender and embraces all possibilities. The chair reinforces that the person who presides over the table can be a woman

A movie which recently brought out the politics of the chair is Rohena Gera’s Sir (2018). Starring Tillotama Shome and Vivek Gomber, it dwells on the relationship between Ratna (a house help) and Ashwin (her employer). Gera’s film rises above the sensational and stays clear of prurience. It is remarkable for the sensitivity it accords both characters, who try to make sense of the feelings that risk overwhelming them. In one scene, Ratna (Shome) is shown serving guests at a party held in Ashwin (Gomber)’s mother’s house. She goes from group to group of well-dressed guests offering them snacks from a plate. Most don’t even nod in her direction. They pay her no heed and simply carry on with their conversation. Their oversight renders her invisible. The next scene shows Ratna and three other domestic staff eating their meal while seated on the floor of the kitchen. These scenes play out without an exchange of words. The contrast—between the guests in the dining room standing and talking and munching, and the staff in the kitchen sitting on the floor—would discomfit most Indian viewers as it shows us our own households. Later that evening, Ashwin even asks Ratna, “Don’t you feel bad sitting on the floor to eat after serving everyone?” She replies, “It is always been like that.” The people who cook our food and drive our cars are not offered chairs. In our own homes, where we have numerous surfaces for rest, they must make do with the floor. That is what ‘they’ are used to, we tell ourselves. The chair is the most obvious divider between ‘us’ and ‘them’.

If the use of a chair (or the lack of it) tells us of social constructs, it also reveals our personal proclivities. Goldilocks and the Three Bears is a story of a family of bears, each with their own assigned places and positions in the house. Each bear has its own chair to sit in: “A little chair for the Little Wee Bear; and a middle-sized chair for the Middle-sized Bear; and a great chair for the Great Big Bear.” When Goldilocks breaks into the house, she finds Great Big Bear’s chair too hard, Middle-sized Bear’s chair too soft, and the little chair just right—until she falls through. The specifications of chairs in fairytales shows how closely chairs are aligned with personalities. Goldilocks falling through a chair highlights the perils of claiming something which is not one’s own.

Every person (and creature) has his/her requirements from a chair. The chair has the distinction of perhaps being the most personalised piece of furniture in a house. A worn chair carries the impression of its sitter. It tells of how the sitter spent their time, it could have been reading a book or knitting a sweater or completing a crossword—all activities that are carried out while the feet are at rest.

Everyone has their favourite chair in a house, and often an empty chair can evoke the most vivid memory of a person. If the bears of our fairy tales have their own favourite chairs, so do our most iconic artists. Van Gogh’s Chair is one of his most recognisable paintings. It shows a tiled floor and a simple wooden chair with a straw seat on which rests a pipe and tobacco. The painting was a pair to another picture, Gauguin’s Chair, which shows a more opulent chair complete with armrests and set against a carpet. The National Gallery write-up on the two paintings notes: “Neither of Van Gogh’s two chair paintings includes a sitter; instead, he chose specific objects and visual effects to represent the personalities and distinct artistic outlooks of himself and Gauguin. In effect, these are still lifes that function as surrogates for portraits.” Van Gogh depicts personalities through the chairs. Van Gogh’s chair is a thing of day and light of yellows and blues, Gauguin’s chair is of the nights and darkness of reds and greens. The paintings of the chairs were reworked after Van Gogh had had a fight with Gauguin. He never saw him again. An empty chair tells us of lives lived and lives lost.

‘I want to treat facts of history as sacred,’ says Navtej Sarna