No One is Beyond Redemption

How Shiva saved the incorrigible Moon 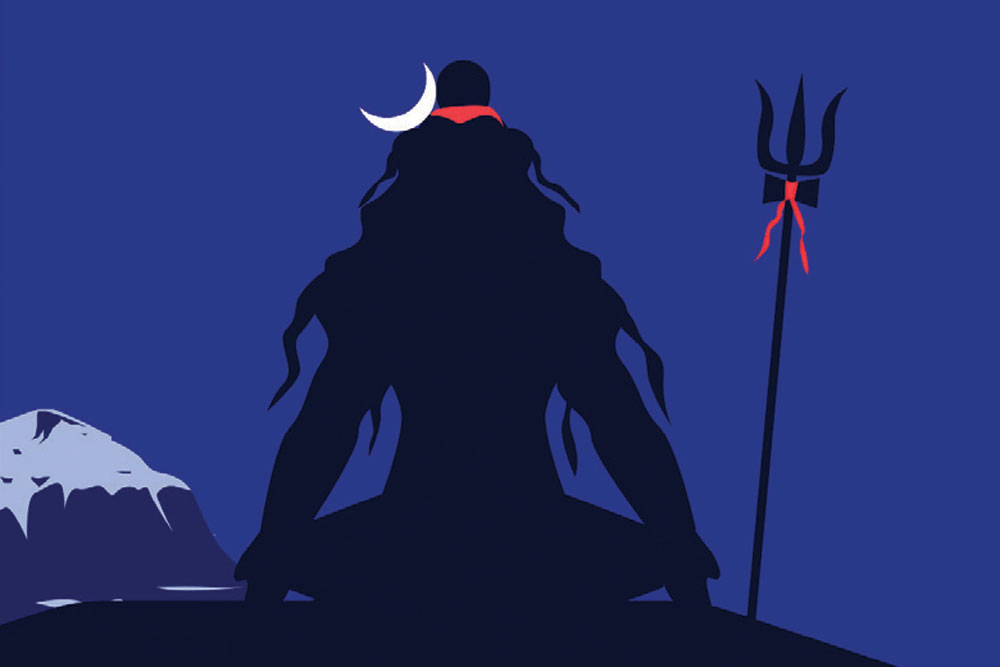 
IN THE LAST few columns, I intended to write about jyotirlingams, but got sidetracked. As everyone knows, there are 12 jyotirlingams. For most, there is no dispute about where they are geographically located. For three, the geographical identification is not that robust. In the famous jyotirlingam stotram, the first jyotirlingam is Somanatha in Saurashtra. There is a story connected with every jyotirlingam, typically, about a parthiva lingam turning into a jyotirlingam as a result of a boon granted by Shiva. We will start with Somanatha. The account is from the Shiva Purana, with Suta speaking to the rishis.

Suta said, “O Brāhmanas! Listen. I will tell you about the greatness and origin of the jyotirlingams. I will briefly tell you, as I have heard from my virtuous guru. No one is capable of relating their greatness, even in one hundred years. Nevertheless, I will tell you. Among them, Somanatha is spoken of as the first. O sages! The great-souled Daksha had twenty-seven daughters. [These are the 27 nakshatras.] He bestowed them on Chandra. The other daughters were bestowed on the twin Ashvins and others. [In standard accounts, Daksha had 40 daughters.] Obtaining Chandra as their husband, they became especially radiant. Having obtained them, Chandra also shone all the time. Set in gold, a jewel shines even more. With a jewel, gold also dazzles more. Now hear about what happened in the course of time. Among all his wives, he loved the one known as Rohini [Aldebaran] the most. The others weren’t loved that much. As a result, they were miserable and went and sought refuge with their father. They went to him and reported their miseries. Hearing this, Daksha also grieved. He went to Chandra and addressed him in conciliatory words. Daksha said, “O store of digits! [The only way of translating Chandra’s kālas, with the waxing and waning.] You have been born in a sparkling lineage. Among those who have sought refuge, how can there be a superior and an inferior? If you have done this, you should not do it again. It is said that such differentiation in conduct leads to hell.” Daksha requested Chandra, his son-in-law, himself. Completely assured, he then returned to his own abode. Deluded, Chandra did not follow his words. This was because of the powers of Shiva’s maya, which deludes the entire universe. Auspiciousness is experienced by those for whom auspiciousness is ordained. If inauspiciousness is destined, how can there be auspiciousness? Incapacitated by that powerful destiny, Chandra did not pay heed to those words. Attached to Rohini, he did not pay attention to the others. Daksha knew about good policy. Hearing this, Daksha was himself filled with sorrow and went and requested Chandra again. Daksha said, “O Chandra! Listen. I have already asked you repeatedly. But since you did not pay any attention, you will suffer from consumption.” As soon as he said this, Chandra suffered from consumption. When the moon started to decay, there were great sounds of lamentation. All the devas and rishis wondered, “What should be done now? What will happen?” They were agitated and filled with sorrow.”

“Chandra told Shakra and the other gods everything. With Vasishtha and the other rishis, they went and sought refuge with Brahma. Having gone there, they told him everything. Extremely agitated, the devas and rishis bowed down before Brahma and praised him. Hearing their words, Brahma was filled with great wonder. So that they could hear, he spoke words praising Shiva’s maya. Brahma said, “Alas! A great misery has arisen for all the worlds. Chandra has always been wicked and Daksha has cursed him now. Chandra is wicked in every possible way and has performed many such acts. O rishis and devas! Hear what Chandra did earlier. The wicked one went to Brihaspati’s house and abducted Tara [Brihaspati’s wife]. For the sake of this wife, he then joined with the daityas. A battle between the daityas and the devas ensued. When Atri and I prohibited the act, the moon returned Tara. However, on seeing that she was pregnant, Jiva [Jiva is one of Brihaspati’s names] said that he would not accept her. When we prohibited him from doing that, he reluctantly accepted her. He said, “I will accept her if she abandons the foetus. Since this is not my son, she should throw it away.” When the excellent sages asked her whose son it was, she replied that it was Soma’s. At this, I removed the foetus [which became Budha] and he accepted her. In this way, Chandra has engaged in many kinds of wicked conduct. But describing them afresh serves no purpose. Why does he keep doing such things? What has happened has happened. It is certainly the case that it cannot be reversed. Therefore, listen attentively. I will tell you about a supreme method. Along with devas, let Chandra go to the auspicious kshetra of Prabhasa. Let him follow the norms and use the Mahamrityunjaya mantra to worship Shiva [“Tryambakam yajamahe sugandhim pushtivardhanam”, “We worship the fragrant Tryambaka, who enhances our nourishment”]. In front of Isha, let Chandra constantly torment himself through austerities. If Shiva is pleased, he will remove his consumption.” Hearing Brahma’s words, the gods and rishis returned to the place where Daksha and the moon were. Assuring Daksha, all the immortals and rishis took Chandra and went to Prabhasa. They invoked the waters of all the noble tirthas, Sarasvati and the others. Following the norms, they instated a parthiva lingam and used the Mahamrityunjaya mantra to worship it. All the devas and rishis, stores of purity, established Chandra in Prabhasa and happily returned to their own respective abodes.”


Chandra said to Shankara, ‘O Lord of devas! If you are pleased, what can i not accomplish?’

“For six months, Chandra constantly tormented himself through austerities. He used the Mahamrityunjaya mantra to worship Vrishadhvaja [Shiva’s name, the one with a bull on his banner]. The moon chanted the mantra a million times. With an unwavering mind, he used the Mahamrityunjaya mantra to perform dhyana. Beholding this, the lord and divinity, Shankara, was pleased. He is affectionate towards his devotees. The lord manifested himself before his own devotee and spoke. Shankara said, “O fortunate one! Ask for a boon, whatever your mind desires. O moon! I am pleased with you. I will bestow every excellent boon on you.” Chandra replied, “O lord of devas! If you are pleased, what can I not accomplish? O Shankara! Nonetheless, please counter the consumption in my body. Please pardon everything else I have done and please always do what is beneficial for me.” Thus addressed, Shiva spoke the following words. Shiva said, “O Chandra! During one fortnight, every day, you will decline by one digit. In another fortnight, you will constantly increase by one digit.” At this, the minds of devas were filled with joy. All the rishis quickly assembled there. Having arrived there, all of them pronounced benedictions over Chandra. Clasping their hands, they lovingly bent down and prayed to Shiva. Devas said, “O lord of devas! O Mahadeva! O Paramesha! I prostrate myself before you. O lord! O Shambhu! Along with Uma, please remain immobile in this spot.” In those ancient times, Chandra devoutly praised Shankara. He prayed again, to the divinity with a form and to the divinity without a form. The lord was pleased with the devas. To increase the greatness of the kshetra and enhance Chandra’s fame, Shankara remained in the place named after Chandra. It became famous in the three worlds under the name of Someshvara. [Literally, Soma’s (Chandra’s) lord. Somanatha has the same meaning.] People who worship there can destroy diseases like consumption and leprosy. Blessed is the one who was successful in his objective. Shankara, the lord of the universe, himself remained in a place that was named after him, so that he can purify the universe. There is a pond there, established by all the devas and subsequently divided among themselves by Shiva and Brahma.

This destroys all sins and is famous on earth as Chandrakunda. [This still exists in Somanatha.] If a man bathes there, he is freed from all sins. If one merely bathes there for six months, all incurable diseases, consumption and others, are destroyed. If one circumambulates Prabhasa, the fruits obtained are identical to those obtained from circumambulating the entire earth. A person’s atman becomes pure and after death, he obtains greatness in heaven. If a man sees Somalingam [that is, Somanatha], he is freed from all sins. He obtained the fruits desired by his mind. After death, he obtains greatness in heaven. It is said that one obtains fruits from visiting excellent tirthas. There is no doubt that all those fruits are obtained there. The rishis and devas witnessed such fruits. Delighted, they took Chandra, cured of consumption, and bowed down before Shiva. Praising and circumambulating that tirtha, they left. Chandra returned to his own former tasks. I have thus described everything about Somesha’s origin. This is how Someshvara lingam originated. If a man hears about this origin, or makes others hear it, he obtains everything that he desires and is freed from all sins.”

There will be similar stories about the other jyotirlingams.