‘Margot, I Am Not Ramakrishna Paramahamsa’

Vivekananda and the Himalayan connection—Part XI 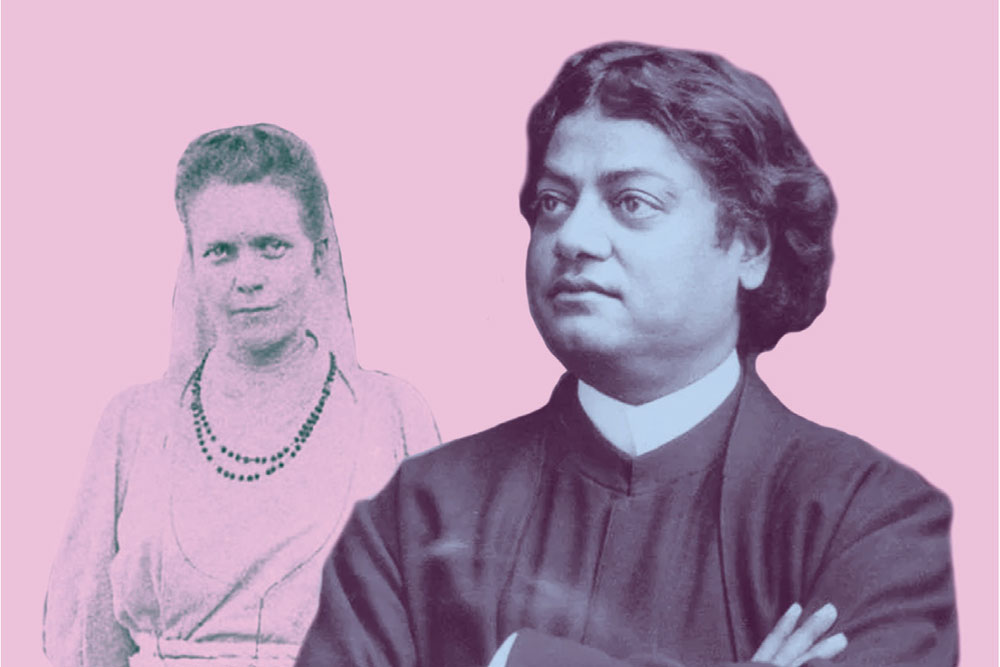 
ONE THING SHOULD be absolutely clear. Despite whatever insinuations Swami Vivekananda’s detractors may have levelled, there was no question of anything even remotely suspicious, let alone inappropriate, happening in the sacred Amarnath cave between master and disciple.

Though high up in the remote Himalayas, the naturally formed shrine was full of worshippers. From all available accounts, including Sister Nivedita’s, it was rather that Vivekananda ignored Nivedita than paid any special attention to her. His spiritual elan and elation seemed to be his own.

Even physically, there was great distance between them.

He did his prostrations, worshipping silently on his own, then left the cave quietly.

Vivekananda’s ecstasies have been vividly portrayed by Nivedita’s own biographer, Lizelle Reymond:

‘He entered the dark grotto with nerves on edge, breath gone, his half-naked body trembling violently. Overcome with emotion, he prostrated himself three times on the ground, and made the one offering he had brought to Shiva: the life of Nivedita. In ecstasy he experienced divine grace, in the Unknowable he found revelation. Dizzy, half-paralyzed, almost fainting, he staggered away’ (The Dedicated: A Biography of Nivedita; John Day; 1953; page 127).

The problem, actually, seems to have been elsewhere.

Nivedita was left alone, bewildered. Somewhere, deep inside her, she might have expected a special darshan together with her Guru, some conjoint experience, even consecration or anointing of her as his chosen disciple, associate or successor. None of this happened. Nivedita felt abandoned.

Though Vivekananda had constantly schooled her against any personal expectation or attachment, the very fact that she alone had been chosen to go with him to Amarnath might have inadvertently raised her expectations. Perhaps, she had some final hope that her special place in her master’s scheme of things would at last be officially cemented if not announced. Was she was looking for some seal or stamp of approval? A certification, perhaps, that she had passed her spiritual examinations and was ready to matriculate? But, to her dismay, no such endorsement or accreditation was forthcoming.

Is that why Vivekananda’s critics accuse him of misleading her? For instance, in ‘Prophet disarmed: Vivekananda and Nivedita’, Narasingha P Sil criticises Swamiji for being insensitive to Nivedita to the point of hurting and damaging her emotionally. According to Sil, Margot was ‘an incorrigible romantic at heart’; her biographer Lizelle Reymond even chided her ‘of being too romantic’ (1953, page 28).

Combing through Reymond’s biography, Sil dredges up Nivedita’s past, even though, in Indian traditions, a renunciate’s previous life is of no consequence. Once she is, as it were, dead to the world, having performed the last rites of her pre-monastic self, it must not even be spoken of. Yet Sil points to Nivedita’s two previous experiences in love, both of which ended sadly. Her fiancé died of consumption before they could be married. Her second serious relationship ended with her being passed over for another.

To her, Swami Vivekananda was thus ‘an exotic and handsome romantic figure’ who might ‘fill the void in her life’ (ibid). Quoting Romain Rolland’s Journal, Sil claims that Nivedita nursed an adoration for her master of which she had openly confessed to Josephine McLeod, even though such feelings were not in the least carnal. Sil speculates, ‘Vivekananda’s repressed monastic life confronted a severe crisis during his sojourn to the temple of Amarnath in Kashmir with Nivedita’ (ibid).

The Swami, as we have already seen, had a peak experience inside the cave. He even believed that he had been blessed with the boon of immortality by the deity of Amarnath, the giant icy lingam. But what of Nivedita? If she had expected a special blessing, she was sorely disappointed. According to Sil, she had ‘felt a “wild joy” in anticipation of this moment’, she saw him prostrating before Lord Amarnath, ‘but then he simply disappeared from the sanctum’ (op cit).

The official Ramakrishna-Vivekananda literature downplays or even omits Nivedita’s experiences inside the cave. On the other hand, her letters which her biographer Reymond relies on tell a somewhat different tale. It is to them, as construed by Reymond, that we must turn to catch a glimpse of Nivedita’s state of mind.


Vivekananda, though he felt Nivedita’s distress acutely, had little by way of consolation to offer: ‘you do not now understand. But you have made the pilgrimage, and it will go on working. Causes must bring their effects. You will understand better afterwards. The effects will come’

According to Reymond, while ‘Vivekananda experienced one of the supreme moments of his life… Nivedita was sunk and lost in agony’:

‘Nivedita had remained inert, bewildered, anguished. Where was this god to whom she had come to pay homage? The cold and her own suffering of spirit enveloped her like a stifling shroud. She looked for her guru, but he had disappeared. Lost, abandoned, she was choked by a cry of revolt. The Swami’s mystical experience became something she could not bear. Why, why had he not shared it with her? She had seen him immersed in beatitude, his hands over his eyes as it he were blinded by too much light, stumbling in the throes of a divine passion, stammering, “Shiva, Shiva.” But what was to become of her? She stayed in the grotto until the cold drove her outside. She did not know where to turn. When she found her guru again she reproached him bitterly, and he looked at her sadly’ (op cit, page 127).

But Vivekananda, though he felt her distress acutely, had little by way of consolation to offer: ‘You do not now understand. But you have made the pilgrimage, and it will go on working. Causes must bring their effects. You will understand better afterwards. The effects will come’.

As Reymond describes it, Nivedita’s suffering was so keen that she was almost inconsolable: ‘She kept murmuring, “Why? But why? I don’t understand.” And he suffered with her, in deep humility, though he could no longer talk to her. When, at the end of ten hours’ march, she was still asking, “Why?” with tears in her eyes, he answered: “Margot, I have not the power to give you what you want”’ (page 128).

A few days later, writing of her innermost anguish to her friend Nell Hammond, she bemoaned, ‘It is such a terrible painto come face to face with something that is all inwardness to someone you worship, and for yourself to be able to get little farther than the external’ (Letters of Sister Nivedita, Volume 1, edited by Sankari Basu, page 18). According to Sil, passages that corroborate Nivedita’s experience inside the cave have been expurgated from the ‘official’ version of Wanderings:

‘The actual contents of the Sister’s diary, especially her conversations with Svāmīji at Amarnath, are deleted from the authorized version of her Notes on Wanderings with Vivekananda, edited by Saradananda. The original unexpurgated manuscript of her diary contains the following conversation between the master and his disciple that reveals her rage and despair. “Oh Swami—it hurts me to speak to you like this,” Nivedita burst out. “But I mean it, so I’d better say it.” And she demanded to know: “Are we Guru & disciple, or are we just a man & woman? Because, if we are Guru & disciple, you ought to help me. But you never do. You speak to me as if [I] were not a woman but you don’t carry out the other side.” She continued: “Then we are not just an ordinary man and woman, and you must remember that”’ (Baṅgīya Sāhitya Pariṣad manuscript No 69/2; no pagination or signature; cited in Sil op cit).

Sil’s revisionist criticism of the Ramakrishna-Vivekananda tradition, albeit meticulously researched, tends to be somewhat sensationalist, controversial, and deprecating, if not reductive.

Was Vivekananda entirely insensitive and cruel as Sil makes him out to be, an outcome of ‘his inability to achieve the paramahaṁsa’s total indifference to women and hence his personal anxiety about his vulnerability’ (ibid)?

Or was he well aware of how hurt Nivedita was and tried to make it up to her? As Vivekananda explained much more humbly to Nivedita, ‘Margot, I haven’t the power to do these things for you—I am not Ramakrishna Paramahamsa’ (Reymond op cit, page 129).