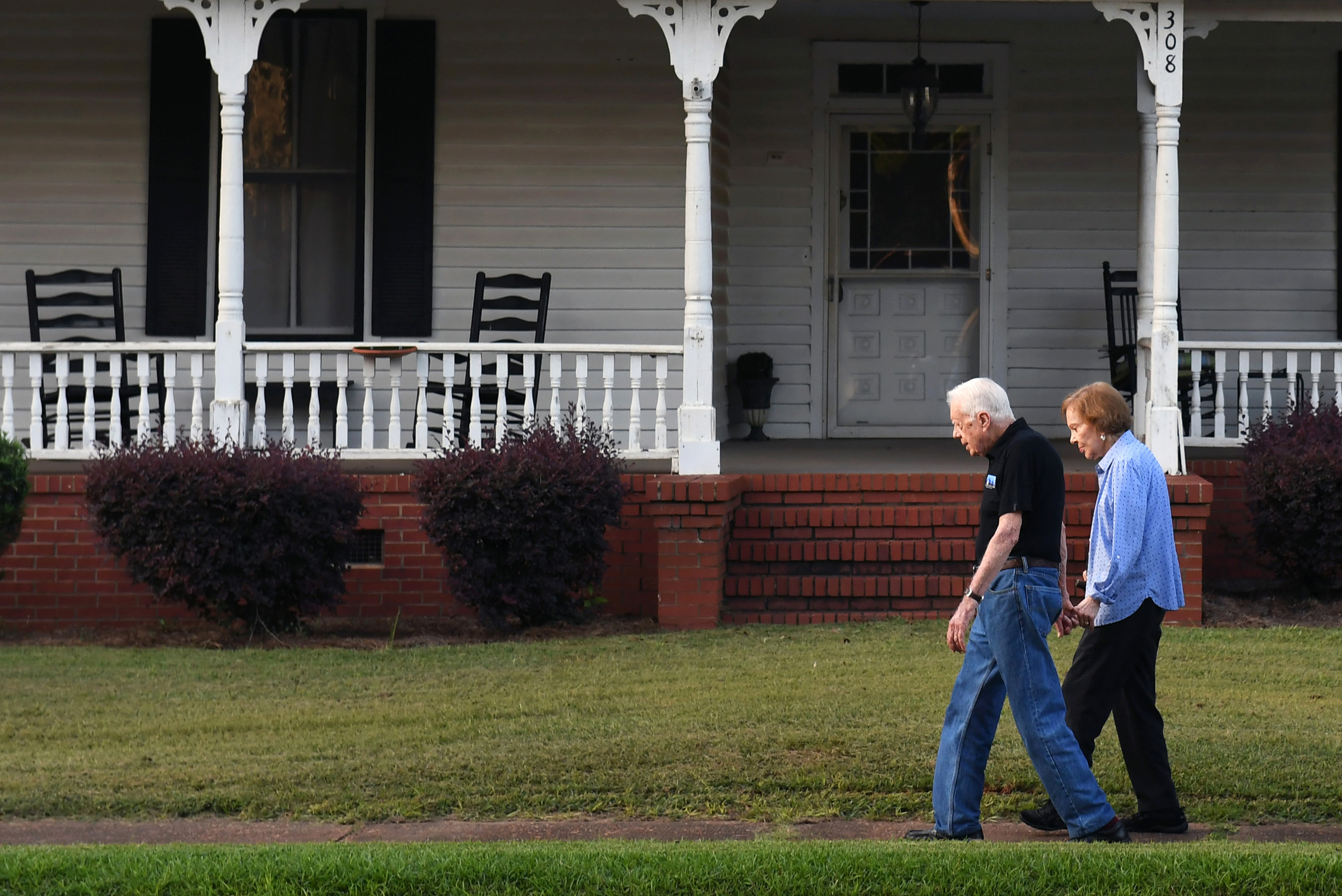 
President Joe Biden and a host of American public figures last week celebrated former President Jimmy Carter. Now 96, Carter served a single term in the White House before losing his bid for a second term to Ronald Reagan. In the decades since, the former president has busied himself, along with his wife Rosalynn, in administering the Carter Centre, which has done extraordinary work in alleviating poverty in Africa, providing medicare to poor societies around the world and overseeing elections in countries where there are threats of rigging by the parties involved.

Life after politics, in a very broad sense, has been productive for Carter, given the tributes to him and given too that of late there have been renewed assessments of his till now underrated presidency. His emphasis, in his presidential years, on human rights as a plank of US foreign policy, his role in bringing Anwar Sadat and Menachem Begin together at Camp David and his concern over global climate (he installed solar panels in the White House, though his successor had them removed) are today regarded as the acts of a leader who was ahead of his time but certainly had his pulse on the future.

In our post-modern world, it makes sense to delve into the careers of political figures who, after being in the corridors of power, find new avenues to keep themselves going. Most people who once happened to exercise power often pass into oblivion once power is theirs no more, but there are those who go through a rebirth in some form or the other. Or you can call it reinvention. There is Walter Mondale, who died recently at 93. He served as a Senator before becoming vice president under Carter. In Mondale’s later years, Bill Clinton appointed him ambassador to Japan, where he stayed three years before coming back home and finding other areas to make use of his expertise.

It all goes to show that life out of power does not have to be a long wait for the sunset. Ireland’s Mary Robinson, having served as her country’s president, went on to be UN High Commissioner for Human Rights. Unable to withstand pressure from the Americans, who were not happy with her, she resigned in 2002. And yet Robinson remains an articulate champion of human riots, much as Michelle Bachelet, the former president of Chile, today presides over the very office that once was led by Robinson. Bachelet, who suffered under the brutal Pinochet regime in the 1970s and later, has been UN High Commissioner for Human Rights since 2018.

Farewells to power have generally been sad affairs, as Alexander Dubček would know. Celebrated as the man who inaugurated the Prague Spring in Czechoslovakia in 1968, he ran out of luck when the Soviet Union led a Warsaw Pact invasion of his country. Seized and flown to Moscow to be reprimanded by the likes of Leonid Brezhnev, he was soon removed from the office of general secretary of his country’s Communist Party and sent off as ambassador to Turkey. He did not last long there and was at one point appointed, in a humiliating move, to the lowly position of forestry officer. Dubček was rehabilitated through the Velvet Revolution led by Václav Havel in the late 1980s and appointed speaker of parliament as communism fractured all over eastern Europe. But Dubček did not live long. He died in a car crash in 1992. Place Dubček in juxtaposition with Mikhail Gorbachev. Since losing power—and seeing the demise of the Soviet Union in 1991—the perestroika-glasnost man has been in bad shape. He runs the Gorbachev Foundation in Moscow, but remains ignored as also vilified by many in Russia. No more than 1 per cent of Russians have any favourable opinion of him.


In Bangladesh, Tajuddin Ahmad, who organised the first government of the country in exile even as the Pakistan army launched a systematic programme of atrocities against Bengalis, served as finance minister under Prime Minister Sheikh Mujibur Rahman, who had been imprisoned by the Islamabad military junta for the entire course of Bangladesh’s war of liberation in 1971. The two men soon developed differences, with Tajuddin leaving government in October 1974. In the brief period that remained of his life, he stayed away from politics and did not join the new national party formed by Mujib, revered as Bangabandhu by his people, in early 1975. Tajuddin was among the four leading Bangladeshi political figures murdered in prison in November 1975. In Pakistan, Field Marshal Ayub Khan, who was forced to quit power in the face of a popular agitation against his regime in 1969, remained away from the limelight and busy writing his diaries. He passed away in April 1974. Interestingly, Major General Iskandar Mirza, the first president of Pakistan and his fellow conspirator in imposing the first martial law on the country in October 1958, was soon forced into exile by Ayub. Mirza lived in Britain for the remaining years of his life in unhappy circumstances.

When Mirza died in November 1969, the regime of General Yahya Khan, which had replaced the Ayub Khan junta, refused to allow his family to bury him in Pakistan. Mirza was eventually interred in Tehran. As for Yahya Khan himself, having presided over the disintegration of Pakistan in the course of the Bangladesh war of 1971, he found himself placed under house arrest by the Bhutto government. He was often seen talking to a vegetable-seller across the boundary wall of his home in Rawalpindi. He did not leave any memoirs behind. Released from home confinement by the regime of General Zia-ul Haq, Yahya died in August 1980. He was buried with full military honours.

Britain’s Tony Blair, his reputation tarred by his role in the invasion and destruction of Iraq in 2003, was subsequently a rather ineffectual quartet envoy for the Middle East. These days, he runs his foundation, which he calls the Tony Blair Institute for Global Change. Compared to Blair, former foreign secretary David Miliband has been doing pretty well with the International Rescue Committee, a think-tank which produces good and lucid assessments of contemporary issues. Miliband is often called on by the media for his assessments of global issues. For Richard Nixon, life after Watergate was a long tale of misery, despite his brave attempts to rehabilitate himself in global opinion. He wrote books, advised some of his successors on foreign policy and travelled the world, especially to China and Russia. He died in 1994. In France, Charles de Gaulle, having resigned the presidency, retired to his home in the village of Colombey-les-deux- Églises in April 1969. He died while watching television in November 1970. Nikita Khrushchev, the powerful Soviet leader eventually put out to pasture by the triumvirate of Brezhnev-Podgorny-Kosygin in October 1964, remained out of public view after his overthrow and died in 1971. Before his death, though, he had the manuscript of his memoirs smuggled out to the West, where they appeared in the form of a book, Khrushchev Remembers.

Algeria’s Ahmed Ben Bella, having been a pivotal figure in gaining independence for his country from France in 1962, was in power till 1965. Ousted by his defence minister Houari Boumeddiene, he was thrown into prison, where he languished for 14 years and was freed only after Boumeddiene’s death. Unable to reconstruct his political career, Ben Bella moved to France, from where he was expelled in 1983. Returning home, he engaged in politics again but with little to show for it. He died in 2012. Ghana’s founder leader Kwame Nkrumah received the news of his overthrow by the army even as he landed in Beijing on a state visit in 1966. Guinea’s President Ahmed Sékou Touré named him co-president of his country. Nkrumah died in Guinea in April 1972. Iran’s ousted Shah, fleeing Tehran in early 1979 once the Islamic revolution under Ayatollah Ruhollah Khomeini had taken hold of the country, was a pathetic figure as he travelled from country to country looking for refuge. It was Egypt’s Anwar Sadat who took him in. The deposed Shah died in July 1980. He lies buried in Cairo.

In America, quite a few prominent figures have had a new lease of life after their years in power. Henry Kissinger, who desperately wished to join the Reagan administration as secretary of state, was rebuffed. He has never held public office since 1977, but has made good use of his talents in the decades since. His books have been acclaimed worldwide. He is these days writing two new books, one on Artificial Intelligence and another on five leaders, including Nixon and de Gaulle. In an earlier era, Adlai Stevenson, twice presidential candidate against Dwight D Eisenhower, expected to be appointed secretary of state by President Kennedy after the 1960 election. Kennedy sent him off to New York as US permanent representative to the UN. Stevenson died in London while taking a walk in 1965. Henry Cabot Lodge, vice presidential running mate of Richard Nixon in 1960, would serve as American ambassador to South Vietnam under presidents Kennedy and Johnson.

Willy Brandt, chancellor of West Germany from 1969 until his resignation in 1974, served as a member of the European Parliament after saying farewell to power. More importantly, he was an influential figure in the Socialist International. Besides, he remains famous for the Brandt Report, which recommended measures towards ensuring the development of the Third World in 1980. Speaking of Germany, Albert Speer, minister for armaments in Hitler’s Nazi regime, was tried as a war criminal along with 21 other prominent Nazis at Nuremberg. He narrowly escaped the death sentence but was sentenced to 20 years in prison. He emerged free from Spandau prison in 1966 and spent the remaining years of his life writing books, a notable one being Inside the Third Reich. Speer died in 1981.

Some politicians, like Spain’s Felipe González, have been honoured by governments not only at home but elsewhere as well. González has written books and has for the past many years been running the Global Progress Foundation in Madrid. America’s former presidents have set up their presidential libraries as keepers of their legacies in office. Bangladesh’s second military ruler Hussein Muhammad Ershad, pushed out of power in December 1990, went through a series of rebirths, as an influential ally, alternately, of the very political parties which had successfully removed him from power. Pakistan’s fourth military ruler Pervez Musharraf, since his rule came to an end in 2008, has been battling legal challenges of various forms and largely staying in the safety of Dubai. Margaret Thatcher shed a tear when she left Downing Street in 1990 and then wrote a book. Edward Heath, who proclaimed “rejoice, rejoice, rejoice” when she fell from power, lived out the years after he lost the leadership of the Conservative Party to her in 1975 as the father of the House of Commons. And, of course, he made lovely music on the piano.

Power energises people. When they lose it, many of them find it hard to adjust to the new circumstances they are thrown into. But then, there are those who, taking things as they are, go on to reshape their lives. And, yes, there are, too, the men consumed by anger and consequent bitterness at losing power. Donald Trump is a prime example.