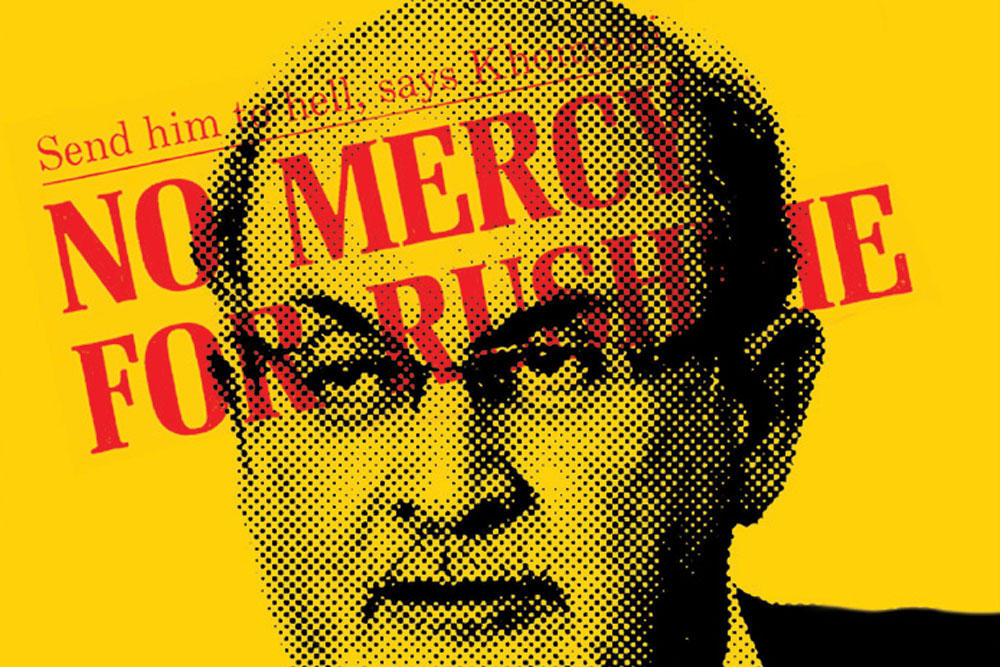 
Student: We had a great discussion on SL Bhyrappa, but do you know who is uppermost in my mind just now?

Teacher: Writers like Rushdie have a tendency to steal the limelight, even if in circumstances most unfortunate.

Student: It’s terrible how he was attacked on August 12 in New York.

Teacher: And stabbed some 10-15 times, “repeatedly and viciously,” before his assailant, Hadi Matar, could be restrained.

Teacher: Or, rather, the “ravages”?

History, ideology, and fiction are inextricably intertwined, with writers suffering exile, book bans, burnings, even assault, and death for daring to oppose or expose beliefs that people are willing to die or kill for.

Student: Thankfully, according to his fourth ex-wife, Padma Lakshmi, he is “pulling through.”

Student: After he was disconnected from the ventilator, his son, Zafar Rushdie, said that his dad’s “usual feisty and defiant sense of humour remains intact”.

Teacher: But, according to his agent, Andrew Wylie, Rushdie might lose an eye.

Student: “An eye for an eye and a tooth for a tooth?”

Teacher: Which, as the Mahatma supposedly said, “makes the whole world blind.”

Student: But in this case, Rushdie didn’t take out anyone’s eye, did he?

Teacher: That is the point, isn’t it? You only write or speak, but those who dislike what you say, slash your limbs, eyes, or neck, causing bodily injury, even death.

Student: Even by the ancient Abrahamic law, then, that doesn’t make sense?

Teacher: A novel that offends must be countered with another novel, words with contrary, I should say, better, more persuasive words—if the ancient Abrahamic law is to be taken seriously.

Student: But what about blasphemy and apostasy offences, still punishable by death in some parts of the world?

Teacher: Clearly, it is time to put an end to such laws, wherever they exist, and customs too—for they have no place in the modern world.

Student: But what about hate speech?

Teacher: It should be punishable, as it is in many parts of the world, by law. But not as blasphemy or apostasy, and certainly not with death penalties or mob lynchings.

Student: It’s awful of Hadi Matar to try to kill Rushdie on the basis of a 33-year-old fatwa.

Teacher: There are two aspects to this. The fatwa itself and how it is used by organisations or private individuals in free societies.

Student: Which is the greater threat?

Teacher: Imagine a state, such as Iran, with all its might, against an individual, however famous or well-protected, such as Salman Rushdie. It’s an unequal contest or, rather, no contest. The individual will lose, sooner or later.

Student: And an independent agent, like Hadi Matar, who acts on such a fatwa?

Teacher: The police are yet to establish a motive, but Matar has pleaded “not guilty” to the charge of second-degree attempted murder. Law enforcement is usually circumspect so as not to spook the trial.

Student: Isn’t that typical of how religious fanatics and bigots misuse the laws and individual rights of free societies to undermine those very laws and safeguards?

Teacher: Despising and disrespecting these very freedoms, they misuse and manipulate to undermine them, to make free societies unfree.

Student: Infiltration and subversion, the typical tactics of liberty-haters? But if a society is strong, won’t it survive and overcome such acts of treason?

Teacher: Look at today’s Western nations, conflicted internally and at their lowest ebb of confidence in possibly a hundred years. The worldwide threat to democracies is real. It should not be ignored or taken lightly.

Student: They say that Matar is linked to Hezbollah, the militant Shia group that operates in Lebanon, backed by Iran.


Imagine a state, such as Iran, with all its might, against an individual, however famous or well-protected, such as Salman Rushdie. It’s an unequal contest or, rather, no contest. the individual will lose

Student: The homicidal attack on Rushdie has been praised by official and rightwing media in Iran.

Teacher: Except for the “reformist” Etemaad, Matar’s act was endorsed by most of the Iranian media. The rightwing Kayhan applauded, “Bravo to this courageous and duty-conscious man who attacked the apostate and depraved Salman Rushdie in New York…. Let us kiss the hands of the one who tore the neck of the enemy of God with a knife.”

Student: That is so sad, if not sick.

Teacher: With its Managing Editor Hossein Shariatmadari described as the representative of the Supreme Leader of Iran, the paper is regarded as ultra-conservative.

Student: An official organ of the government?

Teacher: Almost. Founded in 1943, it used to be the largest circulating newspaper in the Middle East. It supported the Shah of Iran prior to the Islamic Revolution of 1979. Then it was taken over, its assets seized, and its editors appointed by the government.

Student: Isn’t it true that the death sentence against Rushdie was never officially retraced?

Teacher: The last I checked, it was still on the Iran Data Portal, an official governmental website.

Teacher: Ironically, possibly deliberately, it was issued on Valentine’s Day, February 14, 1989, by Ayatollah Ruhollah Khomeini. The death sentence was not only against Rushdie, but all those associated with his book’s publication: “I am informing all brave Muslims of the world that the author of The Satanic Verses, a text written, edited, and published against Islam, the Prophet of Islam, and the Qu’ran, along with all the editors and publishers aware of its contents, are condemned to death. I call on all valiant Muslims wherever they may be in the world to kill them without delay, so that no one will dare insult the sacred beliefs of Muslims henceforth. Whoever is killed in this cause will be a martyr, God Willing. Meanwhile, if someone has access to the author of the book but is incapable of carrying out the execution, he should inform the people so that [Rushdie] is punished for his actions.”

Student: I just looked at it. It ends with, “May peace and blessings of Allah be upon you.” The “peace” of the grave to offenders and the blessings of heaven to would-be murderers, with those dying in the process hailed as martyrs?

Teacher: Careful now. We don’t wish to give offence!

Student: Tell me, have you read The Satanic Verses?

Teacher: Yes. India was the first country to ban it after it was published at the end of September 1988. I read it the following year, when I visited the UK, practically through the day and night because I didn’t want to risk bringing a banned book to India.

Student: Now, it is commonly available on the internet.

Teacher: That is the fate of banned books. In the digital age, it will prove practically impossible to suppress books by banning or burning. Even if entire libraries are destroyed, a lot of stuff is already on the net, dematerialised so to speak, therefore harder to obliterate.

Student: But some countries, like China, censor the net. Isn’t that a way of banning books and prohibiting content?

Teacher: Yes, this is a serious threat to freedom, even if it isn’t entirely effective. There are going to be ways in which information and knowledge will get around, despite the censorship and repression.

Student: Those of us who want a better world, a safer world, a more just and tolerant world, what should we do?

Student: What is that?

Teacher: For starters, we have to give space to the “other” in our discourse.

Student: But does the right wing in India do that? What about Hindutva?

Student: What about SL Bhyrappa himself, whom his critics call a “communalist”?

Teacher: If you read till the end of Aavaran, it is Lakshmi’s former husband, Amir, who helps her.

Student: Really? The same leftist who had insisted on her converting to Islam, only to divorce via a Triple Talaq?

Teacher: You may say that this is out of character or that it is just a trick gesture to avoid stereotyping or tarring an entire community. But the fact remains that in Bhyrappa’s world, Amir helps Lakshmi publish a novel highly critical of medieval historiography, especially the whitewashing of the Muslim conquest of India.

Student: We must talk more about this and intermedial hermeneutics but after our discussion on Rushdie?

Student: Wow! You’ll have to explain that next time.