Why can’t we be bold about the Central Vista project? 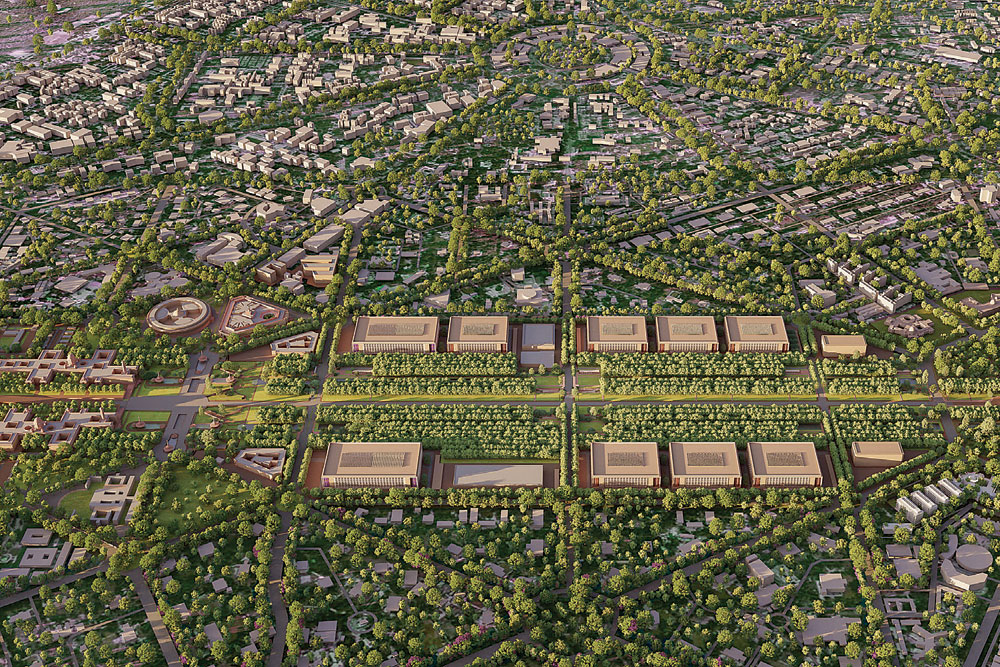 
BEHIND A MASK, only our eyes do the smiling. How does sorrow show through at memorial meetings conducted on Zoom? We long for those earlier days when freedom meant not following ‘Covid protocols’, when we could truly console the bereaved, but what do we do about those who suffer from chronic and wilful nostalgia? A cartoon in a prominent daily tells it well: An old school building is decrepit, leaking with a roof that’s falling apart; at one end, the teacher clings to the building where the door is marked Legacy; at the other end, a child, a frightened student, clings to the door marked Safety. Opinions on development projects concerning culture seem to have been appropriated by this group of almost entirely Delhi-based art and craft patrons, architects and retired bureaucrats. This self-appointed cultural clan of a past era has fought relentlessly at any reordering of crowded, unmanageable public spaces; and mediocre architecture is christened by them as “iconic” because it was made in the time of the first prime minister of India. The thought of redesigned characterless dour pink sandstone bhavans—which convey neither imaginative architecture on the outside nor comfort once you are inside—apparently generates feelings of loss and longing. A chaos of files and unsafe, ecologically unsustainable environments are cling-wrapped in protective nostalgia that views any change as sacrilege and, for some, a part of Prime Minister Narendra Modi’s evil vision.

The campaign against the Central Vista Redevelopment Project has been simmering, depending on the dates of hearings in the high court and the Supreme Court. Since the Supreme Court has cleared the project, some major national newspapers dedicated full pages to those who remembered their childhood forays to India Gate, their admiration for the work done at Udyog Bhawan, and other outpourings of remembrances. No ordinary current users of the lawns at India Gate were asked their opinion, nor would the self-appointed cultural elite have been to the lawns at India Gate recently.

It would be unfair to point only to their objections to everything about the Central Vista project. It started in early 2014, in the first days of the newly elected NDA Government, as soon as it announced the setting up of the Hastkala Academy. It was proposed to be set up at the Crafts Museum soon after and was meant to research and document the multitude of cultural stories associated with India’s arts, crafts and textiles to give them extra financial heft and provenance. A signature campaign began and stories appeared in the media accusing the new Government of ruining Charles Correa’s heritage structure and converting it into unimaginative schoolrooms. The true facts of the proposal did not seem to matter. With the hue and cry as well as government apathy, this project for which Rs 30 crore had been allocated and announced in Parliament was stillborn only six years later. The Crafts Museum itself was badly in need of expansion and renovation. Much of the basic infrastructure was degenerating. Rainwater was flowing down, ruining murals. Voices cried out that rare art was being destroyed, whereas everyone knows that the beauty of the living folk arts of India is that they have multiple talented practitioners who could provide equally magnificent replacements. The cultural proprietors believed the newly elected rulers of India and anyone remotely associated with them were cultural boors.

When Muzaffar Ali started his Jahan-e-Khusrau festival inside a separately enclosed area of the Humayun’s Tomb complex, the heritage historians screamed that the musical vibrations would harm the structures, as would a Metro line underground to Sarai Kale Khan near the Nizamuddin railway station. Today, the Metro and the tombs are hale and hearty and thousands of rail travellers enjoy the convenience of a Metro station within walking distance connecting them everywhere, and an even closer Rahim Khan’s tomb has been exquisitely renovated by the Aga Khan Trust, collaborating with the Archaeological Survey of India and Ministry of Culture. A reordered and beautifully pedestrianised Chandni Chowk awaits a grand opening. However, the dedicated and passionate architect working on the project for some years with the Delhi government faced every roadblock that the heritage conservationists placed before him, including the high court. They clearly wanted the ugly pandemonium that Chandni Chowk had become to continue forever in the name of conserving heritage.


Clinging to the past means clinging to the decay and degeneration of infrastructure that was not built to last centuries or for its aesthetic value. We should not lose the moment by pursuing standardisation

Clinging to the past also means clinging to the decay and degeneration of infrastructure that was not built to last centuries or for its pathbreaking aesthetic value. However, the buildings replacing the current ones at the Central Vista should not require tiles with images of deities stuck to the walls to protect them from betel-juice splatter. Rooms need to be provided with natural air, light and open-floor plans to free huddling stenographers and private secretaries from sitting in tiny dark airless cubbyholes called rooms. Filing and stacking systems need modernising as does office furniture. Corridor decor should not mean a row of unimaginative flower pots leading only to the minister’s room. Transparency, cleanliness, especially in toilet systems, less hierarchy, more efficiency and positivity must be reflected in the architecture and in the interiors. More than the exteriors, the internal working systems, administrative processes and attitudes of a largely obstructive and unhelpful bureaucracy need drastic change.

Administrative reform needs as much urgency as the Central Vista Project. If a container is wonderful but the contents within serve up the old negative cholesterol-clogged procedures of colonial times when every rule and regulation was built on mistrust, all the thousands of crores of rupees spent on buildings will be worthless. Digitisation was meant to make business easier, but in one ministry the terms and conditions for receiving a small grant grew from 14 to 42 and required online as well as hardcopy submissions. Unless sparkling new buildings can eradicate that, we will be back where we started.

We could learn a lesson from Dilli Haat where a lovely marketplace in layout design, with the objective of serving the needs of artisans, has lost its soul and true purpose along the way by giving priority to profit-making and serving the interests of traders rather than genuine craftspeople.

Finally, in a country with forts, temples, monasteries, palaces and stupas that are millennia-old, displaying true Indian skills and ancient aesthetics, and continue to be sources of wonder, the Central Vista plans are but a blink of an eye in the history of our great civilisation. The chief planner and architect, Bimal Patel, should not lose the moment by pursuing standardisation and regimentation. If, as he said in January 2020, he is concerned about fulfilling the purpose of the interiors and letting the outer design grow organically, why not be truly bold and visionary by having the external architecture of each building designed artistically and differently, encasing the inner core of more regular administrative needs? A team of creative contemporary architects could be invited to offer ideas on how a variety of outer structures could be imagined—a veritable museum of different models of modern Indian architecture that can think out of the box and be flamboyant as well as minimalist, displaying the vision of a futuristic India standing firmly on Indian aesthetic roots. Countries like Azerbaijan, Iceland, Lebanon and Senegal, not to mention China, have all thought big and not feared being experimental. This is not the time for the Government to be regimented or timid.