The Latest Pejorative of the Elite

The wave of so-called populism sweeping India is actually a democratic awakening of the masses, says Ram Madhav 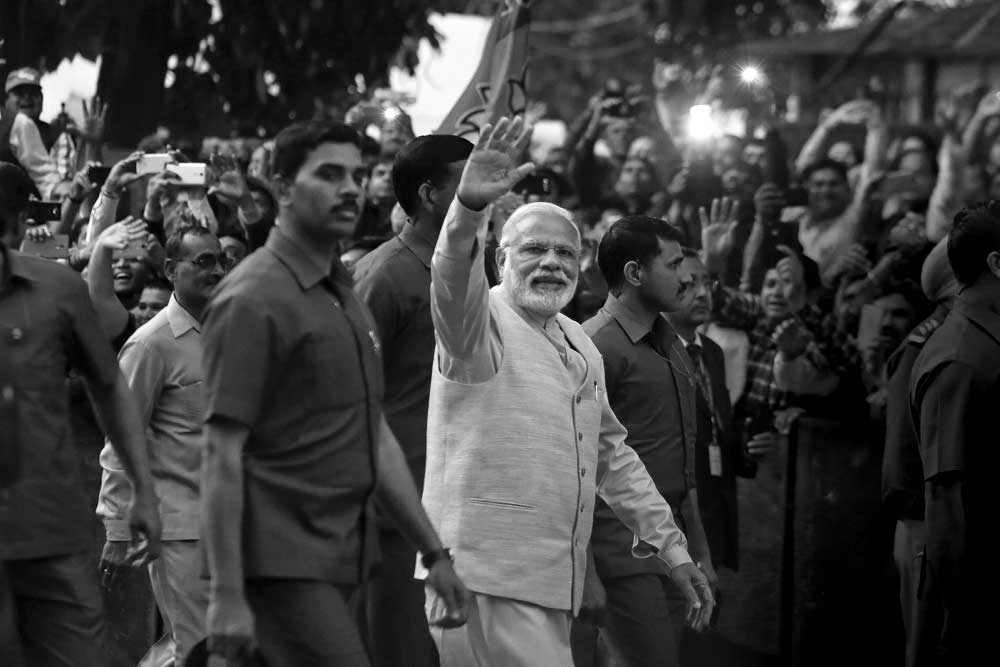 ‘Populist’ is the chosen word of invective for a section of the intellectual elite these days. From newspaper articles by out-of-business columnists to platforms like the World Economic Forum, the buzz everywhere is about populism. Gone are the days of a hue-and-cry over socialism versus capitalism or secularism versus communalism. India’s people have seen through the duplicity of those raising these as concerns. Champions of socialism have turned out to be corrupt amassers of wealth, closet capitalists, and torchbearers of secularism became cheerleaders of minority communalism, and worse, public apologists for terrorism and insurgency.

Exposed and exhausted, now they are on the lookout for new words of slander and sophistry to reinvent their relevance. They had their heyday, until the masses took power back in their hands in a democratic manner. Actually, these elites have never represented the real masses. They suffer from demophobia, fear of the common people. They are disdainful of the proverbial chaiwala, who in their eyes is qualified only to sell tea outside their party offices. They dismiss the masses as ‘mobs’ and pretend that they themselves are the only repository of all wisdom and the rest are just an illiberal, illiterate bunch of mindless millions, easily swayed by a demagogue or a despot.

When the masses rise, not because of any demagoguery, but because of their ability to differentiate between the good and the lofty, and decide to choose their own leadership in a democratic manner, the elites become jittery. They invent theories of right-wing populism. Generally understood as ‘support for the concerns of ordinary people’ or ‘the quality of appealing to or being aimed at ordinary people’, the word ‘populism’ turns into a pejorative term as part of a political theory that defines it something that ‘seeks to disrupt the existing social order by solidifying and mobilising the animosity of the common man or the people against privileged elites and the establishment’.

These elites have undergone an interesting transition. They were once vociferous champions of the masses. They found virtue in the Marxian dictum that the masses have a class enemy in capitalists and supported all sorts of struggles in the name of the people. But when the same masses rise independent of them, the elites suddenly find that less virtuous. This is not democracy, they argue, this populism. Democracy for the elites is a guided affair, guided by them; if they have no say, it is mobocracy.

A known apologist for these liberal elites quotes Princeton Professor Jan-Werner Muller’s book What is Populism? to crib that populists are anti-elite. Muller wrote, ‘Populists pit the pure, innocent, always hardworking people against a corrupt elite who do not really work…’. Now, if people go against the ‘corrupt elite who do not really work’, what is wrong in it? In their haste, these elites, while betraying their disdain for the masses, are ready to accept the proposition that they are ‘corrupt’, ‘do not work’ and ‘privileged’.

Their calling the democratic leadership of the masses ‘populist’ in a pejorative manner brings to mind this quote from the Sermon on the Mount: ‘Why do you look at the speck of sawdust in your brother’s eye and pay no attention to the plank in your own eye?’

IS PRIME MINISTER Narendra Modi a populist? Is India passing through a new phase of populism? The elites tell you that a horrific version of right-wing populism is sweeping across India. Its symptoms, according to them are: vigilante violence, undermining of the press and judiciary, and a weakening of law-based governance. Even the most inclusive slogan like ‘Sab ka Saath Sab ka Vikas’ (Together with All, Welfare of All) is majoritarian for their twisted minds. Frightening the middle classes and the masses is their objective.

When they talk of ‘undermining of the press and judiciary’, recall what many of these elites were doing when the draconian Emergency was imposed on the country by Indira Gandhi from 1975 to 1977. To quote LK Advani, several of them were found ‘crawling when asked just to bend’. The judiciary was under siege then, democracy imprisoned and press freedom ruthlessly crushed under harsh laws. Yet many of the worthy elites were found singing paeans to the ‘great leader’. Many involved in injustices prospered.

The insinuation that in India there is an oppressive climate of political populism is far from the reality. The Press in India is so free today that sections of it freely peddle lies about the country and the Government. For decades, institutions in India were stuffed with people owing allegiance to the Left-Liberal ideology while keeping people of other persuasions out. Today, the very same clique is crying hoarse that the present Government is filling institutions with its people.

Prime Minister Modi’s policies are populist only in the conventional sense that they work to address the concerns of the common people. In fact, Modi’s populism is about changing the habits and mindset of the masses. His populism is about making people not just citizens, but stakeholders in India’s growth story. Modi defied conventional political populism by way of reduction of subsidies and introduction of Direct Benefit Transfer policies. For the first time in India, a scheme by the name ‘Give It Up’ was launched by the Ministry of Petroleum, asking well-off people to give up their gas subsidies. Over 20 million people have responded to the call, thus allowing gas connections to be provided to the same number of rural poor families. This kind of populism has helped in improving the health and hygiene of the rural folk besides helping address carbon emission issues. Similarly, Modi’s Ujala scheme has led to the distribution of over 230 million low-energy consuming LED bulbs across the country. This populism has not only helped in reducing energy consumption but has also reduced electricity bills by Rs 1,200 crore.

Modi’s populism can be seen in his endeavour to build about 50 million toilets in the country’s rural belt. They have helped in improving hygiene at one level, while at another level they were helpful in addressing the health, security and educational concerns of rural women. Through seemingly populist schemes like Mudra, Start Up & Stand Up India, the Modi Government has been able to encourage rural youths from becoming mere job seekers to job creators. In the last three years, millions of jobs have been created especially in the rural and informal sector through such lending.

If there is any one scheme that clearly portrays political populism, it was the demonetisation programme. It was directed against the country’s corrupt elites who loot the country and hide it as black money. Through demonetisation, the Government has been able to break the backbone of the parallel economic establishment in the country. Today, our economy is clean and transparent. The Government has done away with hundreds of obsolete laws, paving the way for ease of doing business.

The Digital India campaign, together with the Aadhaar card, has revolutionised the delivery of public services in India. Today, a citizen can access any public service – whether it is an appointment in a government hospital or a passport application or the electricity connection – through the click of a button on his mobile. Our worthy elites are trying to block it by raising the bogey of privacy. Jonah Goldberg, in her book Liberal Fascism calls these elites ‘Suit-and-tie radicals’.

Modi’s popularity soars today and his reforms are strengthening India. A range of internal and external agencies – PEW or Moody’s or Bloomberg – vouch for it. Here is a leader who has defied the conventional political wisdom of incumbency and improved on his approval ratings after three and half years in power, purely based on his performance. The country’s ease of business ratings, investor confidence indicators and overall approval ratings of the government remain undisputedly high.

It is this popularity that the elites want to destroy by pejoratively calling it populism. Their frustration lies in the fact that many an institution that they had captured earlier is slipping out of their hands. The masses are awakened today. Social media has transformed the way society thinks. The mainstream media, sections of which have been bastions of the liberal elites, have been tamed to a large extend by the explosion of the social media. Social media is the most democratic media. Today we find many of the elites complaining about it, calling it populist tool because it can no longer be ‘guided’ or ‘controlled’.

Let me conclude with sane advice. Jonathan Haidt, a renowned social and cultural psychologist, in his excellent book The Righteous Mind, refers to a conversation between Plato’s brother Glaucon and Socrates. Glaucon asks Socrates to prove that a just man with a bad reputation is better than an unjust man who is widely thought to be good. Socrates gives an analogy: A just city is one in which there is cooperation, division of labour and harmony. All contribute to the common good. In an unjust city one group’s gain is another’s loss, the powerful exploit the weak, and the city is divided against itself. Hence, Socrates argues that philosophers must rule, for, only they will pursue what is truly good, not just what is apparently good and good only for themselves.

Socrates applies the same to a person and concludes that reason must rule the good person. If reason rules, then it cares about what is truly good, not just about the appearance of virtue. Prime Minister Modi is a man of reason. His government is committed to what is really good, populist or otherwise.

(This is an edited version of Ram Madhav’s keynote address at the Asia Global Summit, 2017, held in Hong Kong)