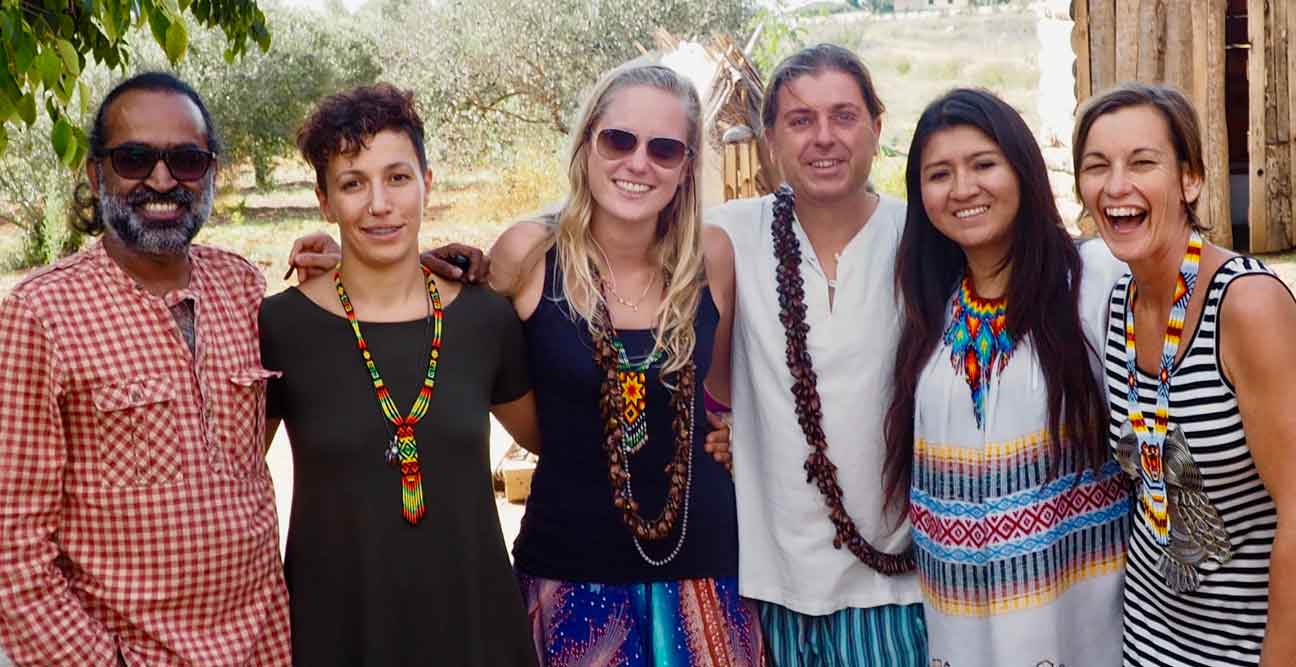 Can drinking a strong cup of foul tasting brew take you into mystical worlds and help you in personal growth and healing? Well, Ayahuasca, a hallucinogenic brew from the Amazon forests might do that for you.

Ayahuasca has become a new-found miraculous medicine for people who love to experiment with psychedelic plants and substances and explore realms of conciousness. The popularity of Ayahuasca has increased so much in recent years, that it’s almost like a revival of the popular counter-culture of the 60’s.

Ayahuasca is a plant medicine used by Shamans of South America for healing and expanding consciousness. Shamans traditionally prepare the ayahuasca brew using two plants native to South America. The first, Psychotria viridis, is packed with the mind-altering compound Dimtheyltryptamine (DMT). The second, the ayahuasca vine (Banisteriopsis caapi), contains substances that stop DMT from being broken down before it crosses the gut and reaches the brain.

“Turn on, Tune in, drop out” was told by Timothy Leary, an icon of 1960s counter-culture and psychedelic self-exploration, in the Human Be-In gathering at San Francisco in 1967, the year I was born. Timothy was a Professor at Harvard and Richard Alpert (who later changed his name to Ram Dass) was his colleague in the Psychology Department.

And 50 years after Timothy said this, I decided to ‘turn on, tune in and drop out’.

I went to attend an Ayahuasca ceremony, where, in a Shamanic setting, I experienced Ayahuasca, Kampo (venomous secretion of a bright green tree frog native to the Amazon basin) and Bufo (the milky-white venom of a toad found in the Sonoran desert). The Sonoran Desert, the desert that Carlos Castaneda, the famous American author mentioned in his books.

Ever since I read the book The Teachings of Don Juan by Carlos Castaneda, while I was a teacher in Bhutan, I was interested in the Shamanic practices of Amazon native people. Castaneda was described as the “Godfather of New Age” by the Times magazine and his books were supposedly based on meetings with an Indian Shaman, Don Juan from Sonora, Mexico.  Even though, the Times magazine later wrote that Castanida never met an Indian Shaman and the book was just a fiction, still, the use of psychedelics known to the traditional people and their impact in healing and conciousness always remained an attractive topic for me.

The Destination and People

After doing an extensive research on the various Ayahuasca ceremonies happening all over the world, I decided to go to Mallorca, Spain, ro attend this ceremony and experience it. Ideally, I would have loved to have experience it in Peru, South America, but the travel time and the ceremony dates did not work out for me.

A few miles away from Mallorca Airport, at a secluded farmhouse, Antonio and Mariela welcomed me and the other participants who belonged to (mostly) different parts of Europe. A large hall, that had around 20 beds laid on the floor, was where we were asked to keep our luggage. A traditional pond, a toilet outside, an outdoor place where the fire ceremony happened and fruit and vegetable plants in the farm, constituted the whole place.

My fellow participants included a father-son duo from London. The son, 28, told me that he had experienced this a couple of times in Peru and wanted his father to experience Ayahuasca too. Among others were Clarie, a young lady from France who is a Yoga teacher, and Jason, from South Africa who worked at the Mallorca Port. Most of them had some prior experience with Ayahuasca and felt that it had benefited them.

The Three-Day Ceremony – In Detail

The evening of the beginning of the Three-Day Retreat, we all were seated in the common hall on the beds laid on the floor, and Antonio and Mariela came dressed in the traditional South American Shaman’s attire and sat in chairs kept at the front of the hall. The session started with introductions and expectations from the ceremony of the participants. The candle-lit hall suddenly became alive with the group, sharing their previous experiences and current expectations.

The ceremony started with Antonio inviting particiants to have Rapé (pronounced ha-PAY), a preparation of powdered medicinal herbs – with a tobacco base. He had a pipe filled with Rapé that he inserted into my nostril and blew powerfully into my nose. Painful would be an understatement. I remember the powder going straight into my sinus. Next, my eyes had started to burn and I felt my head spinning.

Antonio administered Rapé to each one of us and we all sat there sneezing, coughing and some, even vomiting.

Then, he invited us, one-by-one to him, to have the Ayahausca brew, served in a small traditional cup. I was the first one to go and gulped the aweful tasting brew in one go and came back to my seat on the floor. They had given each one of us a plastic bag to vomit. Within ten minutes, I started vomiting. A thought occurred that it was good that I had not had anything to eat that evening.

Usually, it is adviced that one follows a vegetarian diet and avoid alcohol for a week prior to the Ayahuasca Ceremony.

By the time everyone had their drink, the room was filled with sounds of vomiting. We were then moved outside and everyone sat around the fire. There were three other people assisting Antonio and Mariela. Saskia, one of them, a tall thin lady probably in her late 20s, started palying the guitar and singing a song. While Antonio made sure that the bonfire was alive, Saskia sang the song “Aguila Aguila” that meant that “there is a song of the bird from far and that bird is my grandfather”. Some of the participants who were sitting around the fire joined her and I finally felt that my vomiting was over. Slowly, the nausea sensation was overtaken by a different one and I felt that the Ayahuasca had started having an effect on me.

I felt the song getting into my cells and nerves. Mariela was then walking around  with a drum beating that in the rhythm of the song. I looked at the fire and it looked different then and I closed my eyes and covered myself with a blanket that I had carried all the way from Delhi. I could feel my whole body vibrating, sensations moving along the body as I was transcended back in time, to multiple early incidents in my life. They occurred just like a flashback. When I opened my eyes and looked at the stars in the night sky, all my ego and physical existence seemingly ceased in those moments and I experienced a sublime collective existence and oneness.

I saw Marco, a fellow participant who had attended Ayahuasca multiple times before, slowly getting up, going to the pond and heard him jumping into the water at 1 AM. The songs continued and l lay down near the fire, on the grass, covering myself with the blanket. The songs continued till 4 AM and most participants were having intense mind-opening and serene experiences.

Lindsay Lohan, Hollywood actress had announced three years ago that she had participated in an Ayahuasca Ceremony and it was helping her cope with addiction issues and keeping her sober. In her words “I saw my whole life in front of me, and I had to let go of past things.”

We all slept for few hours thereafter.

At 8 O’Clock the next morning, we all were given a two-litre water bottle filled with water and were asked to drink before we take the Kampo medicine.

Kambô is a resin secreted from the back of a large green jungle frog, given the name Phyllomedusa bicolor for classification, but more commonly known as the giant waxy Monkey Tree Frog. It’s found in the southern Amazon, across the countries of Guyana, Venezuela, Colombia, Peru and Bolivia. Kampo is usually applied as a paste on the skin by making small burns in the skin.

Antonio came with a burning incense stick and created three burns on my arm and applied the paste. Within ten minutes of the application, I felt my body heating up and the vomiting started. Almost for the next forty minutes, I sat in the warm morning sun vomiting into a small plastic bucket. Antonio also mentioned that Kampo would help us ground ourselves and build immunity.

After experiencing the Kampo medicine and when the vomiting stopped, we had some breakfast and it was time to have some rest. Many of us got into the pond. Some sat around, discussed their previous night’s Ayahuasca experience and the learning and insights they had from that. After lunch, we had an Integration Session where participants shared their experiences with Antonio and Mariela and both of them made remarks and suggestions. Someone spoke about his or her neck pain and what possibly could be the emotional reason for it while someone shared the challenges of attracting the right partner, and the toxic relationship he keeps getting into.

That evening, we started with Ayahuasca ceremony around the fire again, and the same pattern repeated for the next two days.

On the last day, the added excitement was Bufo.

This is venom of the Bufo Alvarius, a Sonoran Desert toad from Mexico. This toad has the most powerful Entheogenic molecule known to man, 5-MeO-DMT or “The God Molecule”, as many are now calling it. Unlike its cousin N,N DMT, used in the Ayahuasca brew, the 5-MeO-DMT appears only in a few plants and one animal and that is the Bufo Alvarius.

And I was getting ready to experience Bufo in the morning around 11 on a bright sunny October day in Mallorca.

I inhaled the smoke that had the Toad poison and within a minute my body fell back into the waiting hands of Antomio and Marelia.  I was lying on my back on a yoga mat. And quite suddenly, I felt that my only reality was a mass of radiant energy, the sun, the clouds and a deep sense of unity and joy in an abstract form. It was like experiencing that I am The Absolute, the universe and all encompassing. I felt the bright sun, but not in a way that I had experienced the sun before. My ordinary identity diminished and what remained was this feeling of being in unison with Source. I might have been in that state for about twenty minutes. Gradually, I came back, felt my indentity and looked at the sun. And I saw it as I usually would see it.

My experiences and experiments like the Ayahuasca and Bufo, can be questioned from the perspective of Modern Science and Psychology. We have a cogni-centric bias and that’s why we now say that Neuroscience has found meditation to be useful, whereas, thousands of years ago, people knew that meditation was useful, rather highly beneficial.

As Werner Heisenberg, one of the pioneers of Quantum Mechanics, said “We have to remember that what we observe is not nature herself, but nature exposed to our method of questioning.”

So, can drinking a strong cup of Ayahuasca and inhaling a puff of Bufo take you to altered states of consciousness, expand your awareness and help in healing? I do think so.