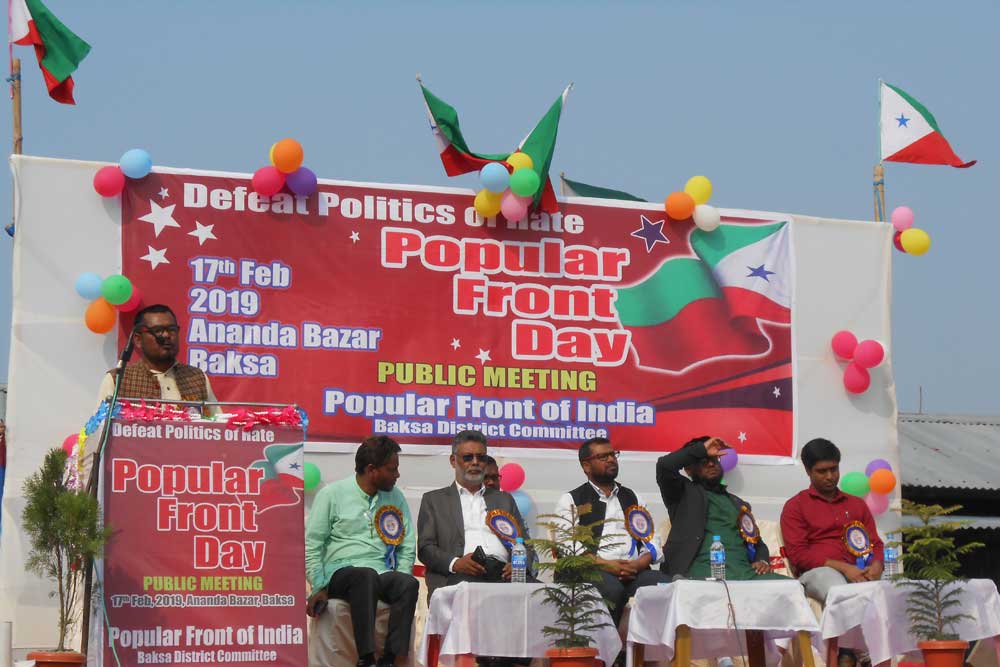 Undeterred by the government’s mounting surveillance on and occasional attempts at blocking its programmes, the Popular Front of India (PFI)—an Islamist organization–has rolled out an ambitious plan to extend its reach to more areas in Assam.  Its optimism in Assam stems from the quick success it has achieved in less than five years–as many as 19,000 of its functionaries are active across 21 districts of the state. Besides Kamrup and Goalpara in western Assam, it has been growing rapidly in the Bengali dominated Barak Valley. In the Northeast, PFI is also working to expand its base in Manipur.

All this has only added to the concerns of the police and security agencies since PFI is suspected of being a radical Islamist outfit with links to the banned Students’ Islamic Movement of India (SIMI). It was recently proscribed in Jharkhand for the second time and the Centre had actively considered adopting a similar policy towards the organization two years ago. Founded in 2006, the organisation has now spread to 24 states in the country with headquarters in Delhi. Recently, PFI celebrated its thirteenth foundation day all over the country wherever the organization has a presence with the theme “Defeat Politics of Hate.” In Assam, the event was marked by a modest gathering at Ananda Bazar, located about 150 kms west of Guwahati, which was also attended by delegates from the Bodoland Territorial Autonomous Districts Minority Students Union, All India Imam Council, Sanmilito Jonogosthiya Oikya Mancha and Campus Front of India (CFI).

Speaking in Assamese, senior functionaries of the organization slammed the controversial Citizenship (Amendment) Bill 2016 which seeks to grant citizenship to a section of non-Muslim refugees from some neighbouring countries, the attack at Pulwama, victimization of Muslims in Assam and the BJP’s pro-Hindutva policies. “We must keep on fighting and have faith in the justice delivery system. There are forces trying to stop us at every step but we will never deviate from our ideals,” thundered PFI vice president Abu Samad. Later, the PFI decided to get involved with the general elections in Assam where they will support the “winnable” non-BJP candidates in five constituencies where Muslims have a deciding role out of a total of fourteen in the state. Functionaries revealed that this was part of an all-India campaign in about a hundred constituencies with the same goal of defeating the BJP.

Some government officials claim that PFI is a radical Salafist outfit whose organizational structure is similar to the Muslim Brotherhood founded by Hasan-al-Banna in 1928 and later streamlined by Sayyed Qutub to overthrow governments in Egypt. Its goal was to establish a puritanical Islamic rule in the Middle East and gradually spread to other countries in the world. They said that after the SIMI was banned, its leaders continued with their radical agenda under the Kerala based National Democratic Front (NDF). Years later in 2006, PFI emerged after the NDF joined hands with two more organisations – Manitha Neethi Pasarai (Tamil Nadu) and Karnataka Forum For Dignity.

PFI’s constitution, however, proclaims that its goal is to promote national integration, communal amity, peace and goodwill among different communities and formulating plans for the social, economic and educational development of minorities and backward classes. Functionaries in Assam denied links with the banned SIMI or with any radical ideology. “Have you ever heard of SIMI’s presence in Assam? There are deliberate attempts by the government to ban PFI for nothing. Ours is a people’s movement and it is for the public to judge our activities. Some media houses have even put us on trial without ascertaining the facts for which we had to slap legal suits against them,” president of the Assam chapter Aminul Haque told this correspondent.

In Assam, the police had prevented the PFI on at least three occasions from conducting its programmes at different venues in the state. On 17 February, an official was also seen taking video footage of the programme and the participants at Ananda Bazar. Police and intelligence officials explained that the PFI’s rapid expansion in the state was “alarming” due to three factors. First, there is a distinct possibility that lakhs of people might fail to enroll their names in the updated National Register of Citizens (NRC). The process of filing claims and objections has drawn to a close and the Supreme Court has refused to extend the date for the publication of the final list beyond July 31. Officials believe that the people whose names are excluded could be drawn to radical ideas propounded by extremist outfits and efforts to deport them from the state would be aggressively resisted. Recently, PFI has announced that it was opposed to the continuation of the exercise to draw up a list of citizens in Assam.

Second, PFI’s strategy in Assam has been markedly different from other states where its functionaries have sometimes been apprehended for involvement in criminal activities. “In Assam, the group has been extremely careful not to indulge in any activity that could be a reason for a crackdown. PFI is focussed on the areas inhabited by Bengali speaking Muslims many of whom may not be citizens. The movement has been peaceful so far and dissimilar from the tactics adopted by the Islamist terror outfits that have sporadically surfaced in the state,” said an official. He was echoed by a retired official of the home ministry who explained that PFI’s emergence in Assam could also be attributed to increasing disapproval of the All India United Democratic Front (AIUDF) among the Bengali Muslims and the space left vacant by the Islamist terror groups that had fizzled out earlier.

Reports about the activities of Muslim Fundamentalist Organisations (MFOs) in Assam and the Northeast have been occasionally surfacing in the media for the past several decades and very often linked to the designs of Pakistan’s Inter Services Intelligence and its allies in Bangladesh’s Directorate General of Forces Intelligence (DGFI) over the region. On 6 April 2000, Assam chief minister Prafulla Kumar Mahanta tabled a report in the assembly titled “ISI Activities In Assam,” which described the growth of Islamist militancy in the state as the outcome of ISI’s efforts to “destablise” the region. The report explained that ISI had embarked on a six point strategy to assist local militant outfits, create new outfits along communal lines, supply explosives and weapons, indulge in sabotage, promote fundamentalism among local Muslim youth and communal tension between Hindus and Muslims.

The agency went on an overdrive to assist rebel groups in the Northeast which included ethnic and a few Islamist outfits that capitulated within no time. As many as 120 militants belonging to MFOs have surrendered in Assam and Manipur between 1999-2004. During the same period, 363 miliants were apprehended including cadres from the Muslim United Liberation Tigers of Assam, Harkat-ul-Mujahideen and People’s United Liberation Front. Ostensibly, the ISI stands to benefit by sponsoring the MFOs as they could be used to further Islamisation of the region, facilitate the demographic invasion through illegal migration from Bangladesh and carve out a Brihot Bangladesh—or “Greater Bangladesh”– by attaching Muslim majority areas with Bangladesh.

It is highly possible that the MFOs suffered from a shortage of committed cadres, leaders and funds that prevented expansion of the movement. Their radical ideas were unacceptable to large sections among the Bengali speaking Muslims including immigrant communities in Assam. So the ISI saw greater wisdom in befriending the ethnic rebel groups like the ULFA and NDFB in Assam. Besides, the emergence of political parties like the All India United Democratic Front (AIUDF) that championed the cause of the Muslims in Assam resulted in a setback to the extremist ideologies that might have sustained the Islamist groups. Nonetheless, Assam has begun to blip on the radar of global and regional Islamist terror groups. Al Qaeda chief Ayman al-Zawahari had mentioned Assam as one of the three states in India where Muslims would be rescued from injustice and oppression. Between 2014-18, operatives working for Hizbul Mujahideen and Jamatul Mujahideen Bangladesh (JMB) were also apprehended in the state from different districts.

For the PFI, it is the pen that is more important. It will give the “utmost attention” to the spread of education in Assam among the three sectors that have been identified including raising awareness and health. A scheme called “School Chalo” has been launched with the goal of opening schools in remote areas where no access to educational facilities exist. “So far the programme has reached 16 districts in Assam. Our goal is to cover more areas with the engagement of as many people as possible,” Haque explained.

Implementation of the scheme in an area begins with extensive surveys through a door-to-door visit of households, analysis of the data and understanding the reasons behind the low literacy rate. Functionaries revealed that “follow-ups” are essential since there were many cases of children dropping out of school. They said that the greatest challenge to spread education was at a riverine island called Ravanar Char in Barpeta where students had to be compelled to go to the school it had established with four teachers.

Inhabitants of the riverine islands in Assam have a low literacy rate similar to the population along the inter-state borders. As an incentive for the children, PFI has been distributing school-kits since the past several years. An amount of Rs 1.4 crore has also been distributed to 2085 students for higher education as part of an all-India programme. Funds for the programmes are generated through multiple sources with an emphasis on voluntary contribution from the locals and cadres. In health, besides distributing CDs and encouraging people to engage in yoga, assistance of private medical agencies has been taken to offer services to people in remote areas of the state.

The PFI supported student wing Campus Front of India (CFI) has also begun to make its presence felt through a slew of programmes in Assam. From a humble beginning in 2016, it is now active in at least nine districts including a few prestigious educational institutes like Cotton College and Gauhati University. “CFI has a two-pronged agenda of producing good quality students and empowering the campus which means resolving all issues, establishing the rule of law and the ideals laid down in the Constitution,” said Khurshed Alam Choudhury, former president and currently a member of the association’s executive council. Choudhury, who is pursuing MBBS in Gauhati Medical College, clarified that CFI had no links with the PFI although the ideologies of both the organizations were similar.

So far in Assam, CFI has focused on career guidance to college students, campaigns against drugs and fascism and coaching centres for school children in Kamrup and Goalpara. Last year, it was able to attract large crowds of students to protest in some colleges against the rape and murder of Asifa Bano in Jammu and Kashmir. A three day sports event for children was successfully concluded as well last October in the twin districts of Kamrup and Goalpara which included as many as 40 events.

After Kerala PFI sets roots in Assam
Demography is Destiny