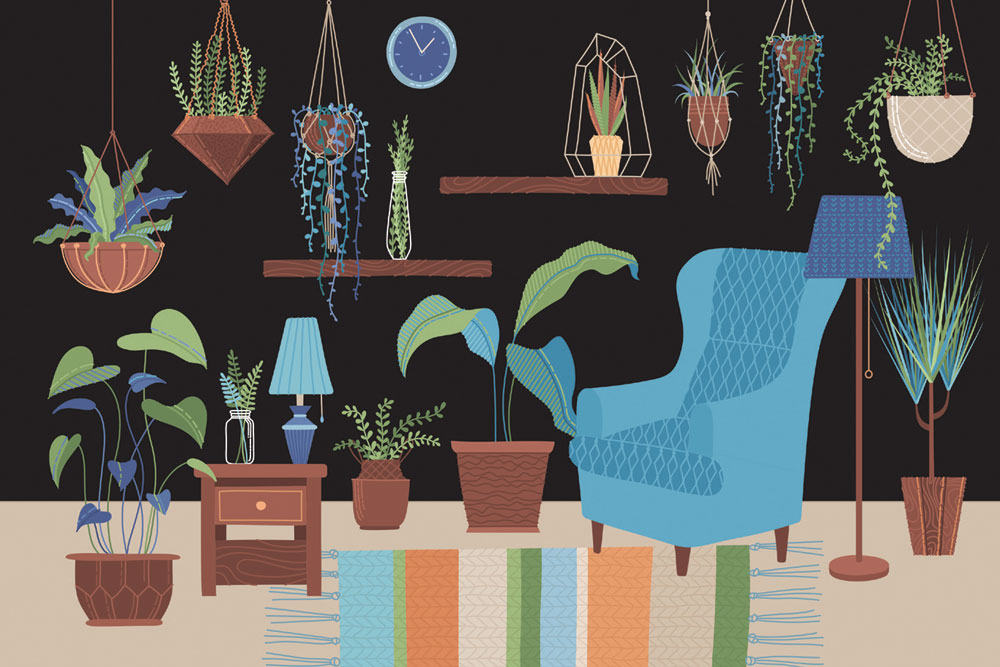 
FED UP WITH the relentless and depressing march of Covid-19, I retreated to tending my garden and thinking about murder. This is an ode to the inimitable Agatha Christie and the role gardens played in her books. Plants, flowers and trees were not only a tool of murder but also living, breathing characters with tales to tell. We know of the mortal danger of foxglove leaves, mushrooms, oleander tea and horseradish. In How Does Your Garden Grow, strychnine is concealed in an oyster and the shells are hidden (in plain sight) as decoration in the garden. But a greater effect is produced by her use of nature as a harbinger of evil. In Nemesis, three spinster sisters live in a manor surrounded by an old vineyard, a crumbling greenhouse and an overgrown garden that hides troubled memories and an actual body. In Dead Man’s Folly, the gardens and woods (modelled on Christie’s Devon holiday home, Greenways) provide the setting for a murder during a treasure hunt plotted by her alter ego Ariadne Oliver, a mystery writer.

For someone who spent her childhood in a large house with ‘a kitchen garden, the garden proper and the wood’, it is not surprising that gardens feature so prominently in her books. The choices made by her characters—of flowers and plants and the type of planting (wild cottage gardens or manicured and ordered ones)—show the British-foreigner divide and social class.

It comes through in the attitude of Belgian Hercule Poirot and the English Jane Marple to gardens. Both have logical minds and are extremely sharp, and both created associations between personalities, emotions and crimes. Both of them could put themselves in the shoes of the murderer. But their views on gardens and nature are diametrically opposed. Miss Marple’s knowledge of gardens helps her solve cases. The solution to a case rests on the gardener’s appearance on the wrong day; Miss Marple says: ‘A real gardener would not come to work on Whit Monday.’

Poirot, though, did not care much for nature. Not for him a ramble in the woods. How, pray, would the gloss on his patent leather shoes survive the stains and scratches of such an expedition? Here we see the distinction between a Continental attitude to gardens—they have to be useful—as compared with an English one—they have to be beautiful. A well-tended neatly arranged kitchen garden was more likely to bring a murmur of admiration from Poirot, with his mania for order and symmetry taken sometimes to absurd lengths, than a wild English garden with daisies and cosmos and daffodils allowed to run riot. In Dead Man’s Folly, the chauffeur stops the car and points out the River Helm and Dartmoor in the distance. ‘It was clear that admiration was necessary. Poirot made the necessary noises, murmuring Magnifique! several times. Actually Nature appealed to him very little.’ It is not surprising that when Poirot fondly contemplates his retirement to a pretty cottage in an English village, he also talks of growing vegetable marrows. Which he does in The Murder of Roger Ackroyd.

Miss Marple, on the other hand, takes a great deal of pleasure in pottering around in her garden in St Mary’s Meade. She prefers flowers and ‘did not care much for vegetable gardens’. Between tea and her frugal evening meal, Miss Marple liked to work in her garden or indulge in a spot of birdwatching. ‘Miss Marple always sees everything,’ muses the Vicar in The Murder at the Vicarage. ‘Gardening is as good as a smoke-screen, and the habit of observing birds through powerful glasses can always be turned to account.’ Which Miss Marple does in the book when she solves the murder by examining the goings and comings of the suspects who have to pass her garden to enter the victim’s driveway. And when her aches grew with age, Dr Haydock’s decree—‘No stooping, no digging, no planting—at most, a little light pruning’—was obeyed with great reluctance. Alas, the garden had to be surrendered to a jobbing gardener ‘who neglects the sweet peas and the roses in favour of asters and salvias’. What’s wrong with that, a non-gardener might ask. Through that one phrase, Christie brilliantly captures the social milieu of Miss Marple’s England.

To understand Miss Marple’s anguish, we have to understand what these flowers meant for a social class that was rapidly disintegrating. The early half of the 20th century, particularly the inter-war period and the Great Depression was a time of great upheaval in the fortunes of the upper classes in England. Miss Marple lived in a time when the class structure of British society was in turmoil. Great stately homes were being sold off, and the new aristocrats, the captains of industry like Oswald Coote in The Seven Dials Mystery, were busy snapping these up. But they came from beginnings as humble as the housekeepers and gardeners who now worked for them. Miss Marple herself belonged to a class of provincial gentlefolk that produced Canons and Deacons and Vicars, but found herself in straitened circumstances. Not surprisingly, she and her class clung to one area, gardens, where they could show off their station in life. Opting to grow fragrant flowers such as roses and sweet pea popular among the Victorian upper classes and scoffing at the jobbing gardener’s suggestion of salvia and asters.


Agatha Christie herself had grown up in a large house with neatly sectioned gardens. At the time she was growing up, like everything else, gardening in England too was undergoing a revolution. The English cottage garden style with its emphasis on colour, arrangement and fragrance continued, but now the urban working classes were coming to it in great numbers

Agatha Christie herself had grown up in a large house with neatly sectioned gardens. At the time she was growing up, like everything else, gardening in England too was undergoing a revolution. The English Cottage garden style with its emphasis on colour, arrangement and fragrance continued, but now the urban working classes were coming to it in great numbers. Old world damask roses, lavender, Sweet William, portulaca were popular. So was sweet pea, a popular flower in Edwardian times. The colours echoed the pastel shades so favoured by fashionable ladies, accompanied by a wonderful scent, writes Margaret Willes in The Gardens of the British Working Class. In fact, The Daily Mail hailed the sweet pea as the most English of flowers and Britain as the nation of gardeners. Brightly coloured borders and beds, peacock and hen topiaries, gnomes and clipped yew hedges were adopted by working-class gardens to ape the fashions of the upper classes. Fields were being converted into Developments, and small gardens had rock gardens.

In The Murder at the Vicarage, a rock brought to Miss Marple’s Japanese Garden gives her a clue to the murderer’s identity. Miss Marple frequently uses plant and garden lore to emphasise evil. In The Four Suspects, her knowledge of different varieties of roses and their names help her crack the case.

In the Poirot books too, Agatha Christie uses the character’s attitude to gardens to establish his or her personality and class. In Dead Man’s Folly, Mrs Foliott, the former owner of Nasse House, is congratulated by her neighbours at the fete given by the new owner. They behave as if it were her house still. One of them compliments her on the rose garden and on cutting back the berberis, an evergreen hedge plant, and how well it showed the blue of the hydrangeas. These conversations later help Poirot figure out the identity of the murderer.

Social snobbery also breeds in the veins of gardeners and the children of the staff. In A Pocket Full of Rye, Inspector Neele, whose father was the gatekeeper in a lodge, muses with disapproval on the gardens of the new rich like the Fortescues of Yew Tree Lodge. ‘The gardens were highly artificial—all laid out in rose beds and pergolas and ponds, and living up to the name of the house with large numbers of clipped yew hedges. Over on the right, behind the rose pergola, there was a bit of actual nature left, a vast yew tree of the kind one associates with churchyards.’ Later in the book, Pat, an Irish peer’s daughter is strolling through Yewtree lodge with her black sheep of a husband; it is his father’s house.

‘I hope I’m not hurting your feelings if I say this is quite the nastiest garden I’ve ever been in…no expense spared. All the right rhododendrons and all the right bedding out done in the proper season, I expect.

What would you put in an English garden, Pat?

My garden would have hollyhocks, larkspurs and Canterbury bells, no bedding out and none of these horrible yews.’

Gardeners show the new rich their lowly place. Lady Coote (who was the daughter of a hardware store owner) has a conversation with MacDonald, the dour Scottish head gardener of Chimneys, which the Cootes are renting for the summer.

‘I was wondering—could we have some of those late grapes for dessert tonight?’

‘They’re no fit for picking yet,’ said MacDonald.

He spoke kindly but firmly.

She plucked up courage and told him she had tasted one yesterday. MacDonald looked at her and she blushed. She was made to feel that she had taken an unpardonable liberty.

In a later part of the book, after the Cootes leave and the Earl and his daughter Bundle are back in their house, Bundle has a conversation with MacDonald; ‘Let’s have some of those grapes in from the far house. I know it’s the wrong time to cut them because it always is, but I want them all the same. See?’