In a freak coincidence, three of Australia’s Test cricket captains have wept in public confessing their weakness and guilt 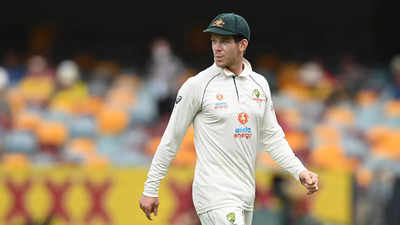 
The world saw Australian Test captain Tim Paine in tears while addressing the media and reading out his statement of stepping down from captaincy. Paine was not the first Australian captain in modern cricket to weep in public. He is the third. The others are Kim Hughes and Steve Smith.

In the middle of the 1984-85 series against the West Indies, Hughes decided to step down as he was not able to lift the Australian team from the nadir of defeats. In 1983-84, Hughes had led the team to the West Indies and lost the series 0-3. The Aussies were struggling following the retirements of a number of their star players, and young Hughes, a brilliant bat himself, was not able to inspire the youngsters. After his team lost in the second Test at Brisbane, Hughes decided to quit.

While speaking to the reporters, he couldn’t control his emotions, and he wept. He said: “The constant speculation, criticism, and innuendo by former players and sections of the media have taken their toll. In the interest of the team, Australian cricket, and myself, I have informed the ACB of my decision to stand down as Australian captain.” Then he broke down.

Hughes was emotional even when he entered the media room, and tears rolled down his cheeks as he spoke. Once he began to sob, he stopped and gave the statement to Bob Merriman, the Australian manager, who was sitting next to him, to complete reading it. With his head bowed, Hughes left the room.

Many years later, Hughes reflected on that emotional moment. “When I sat there in the press conference, I just couldn’t stop myself. It was an emotional thing to do and I don’t regret doing it. There was no media manager as well at that time; you had to fend for yourself.”

It is another story of how the new captain, Allan Border, rebuilt the team and conquered the cricketing world.

Many years later, another Australian captain, Steve Smith, the best batsman then, went through a similar ordeal though the reasons for breaking down were not his team’s poor performance. Smith had to quit following the infamous ball-tampering incident, “Sandpapergate scandal”, in 2018 when young opener Cameron Bancroft was caught on television using sandpaper to roughen up one side of the ball. Vice-captain David Warner, Bancroft, and Smith confessed their roles in the incident in the Test match at Newlands, Cape Town, South Africa. Cricket Australia slapped them each with a one-year ban from cricket. Smith, who was on top of the cricketing world at the time, was devastated.

When he arrived in Sydney on March 29th, 2018, he met the press at the airport. He said that as captain of the Australian cricket team, he was owning up full responsibility, adding that he had made a serious error in judgement. “It was a failure of leadership, my leadership.” He apologised to his teammates, cricket fans all over the world, and to all Australians, especially to his parents. “I know I will regret this for the rest of my life. I’m absolutely gutted. I hope, in time, I can earn back respect and forgiveness,” said a tearful and sobbing Smith.

On November 19th, Paine stepped down as his “sexting” a former Cricket Tasmania colleague in 2017 was been made public. Paine’s decision has shocked the cricket world as the Ashes is just weeks away.

Though Paine was exonerated after the Cricket Australia investigation, the messages appeared in the Australian media following a News Corp report. Some of the messages were graphic, including a picture of Paine’s genitals.

The wicketkeeper-batter apologised to his wife and family, and said he was stepping down as Australia’s Test captain with immediate effect. “We thought this incident was behind us and that I could focus entirely on the team, as I have done for the last three or four years,” he said. “However, I recently became aware that this private text exchange was going to become public. On reflection, my actions in 2017 do not meet the standard of an Australian cricket captain, or the wider community. I’m deeply sorry for the hurt and pain that I have caused to my wife, my family, and to the other party. I’m sorry for any damage that this does to the reputation of our sport and I believe that it is the right decision for me to stand down as captain, effective immediately. I do not want this to become an unwelcome disruption to the team ahead of what is a huge Ashes series.”

While he was reading out his statement, his eyes became teary, and he wiped his tears.

“I have loved my role as captain of the Australian cricket team. It’s been the greatest privilege of my sporting life to lead the Australian men’s Test team. I’m grateful for the support of my teammates and proud of what we’ve been able to achieve together. To them, I ask for their understanding and forgiveness. To Australian cricket fans, I’m deeply sorry that my past behaviour has impacted our game on the eve of the Ashes. For the disappointment I have caused to fans and the entire cricket community, I apologise,” he said. However, Paine did not take any questions from the reporters.

Though it is not unusual for international athletes to break down in public stare, it is unusual for a Test-playing country, that too as formidable as Australia, to have its three captains, national heroes, break down in public. While crying or weeping in public is not a sign of weakness or meekness, it is a freak coincidence that three Australian captains were in tears while reading out their decision to step down, and apologising to their fans.

When a ruddy Hughes wept, then West India skipper Clive Lloyd was bemused. “In this job, you have to learn to take the good with the bad,” said Lloyd.

Sabin Iqbal
Sabin Iqbal is a Bangalore-based journalist and author of novels: The Cliffhangers, and Shamal Days