The Call of the Ks and Havel’s Heart

Many metamorphoses in Velvet City 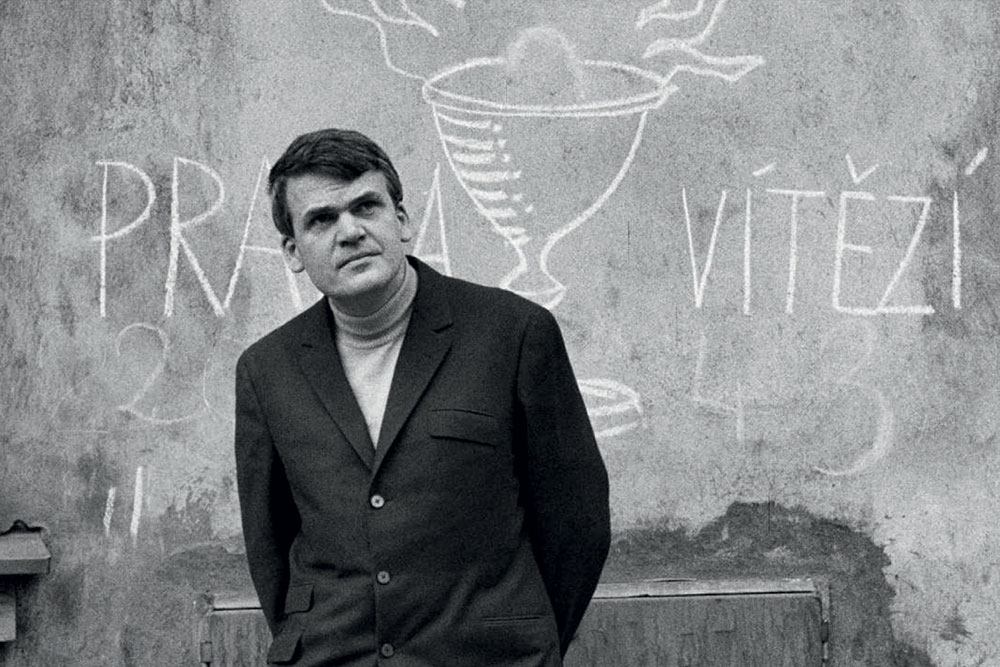 Milan Kundera in Prague, 1967, one year before the Prague Spring


WHEN Franz Kafka woke one morning from bad dreams, he found himself transformed right there in his beloved city into a cute little souvenir… In Prague, a city of spires and cobbled streets and uniform baroque beauty, a city of so many troubled imaginations and music, Kafka is a bestselling spectral narrative reduced to the pretentious patois of literary tourism. Immortality is made legible to the backpacker on a tee or a tote, and to the curious flâneur in exhibitions with names such as K: World of Franz Kafka. In Franz Kafka Square in Old Town (right across the best absinth shop in the city), I bought a ticket to this subterranean, multimedia show where Kafka is an allusion, a presence. He provides the voiceless voiceover to the Prague chronicles Joseph K could have comprehended better. Among them the martyrdom of Jan Palach, a philosophy student at Charles University, whose self-immolation on January 16th, 1969, in Wenceslas Square, which would become the site of the Velvet Revolution two decades later, still remains a tragic, solitary rejoinder to the crushed Prague Spring of 1968. The ‘author’ of this exhibition, a police photographer, who died shortly after the opening of the exhibition in 2018, had “encountered a lot of paradoxical situations that, with their absurdity, pointed to the forces manipulating our lives,” situations he thought were very Kafkaesque.


KAFKA’s world has no street names, and his characters, with exceptions like Gregor Samsa, are as spare as Joseph K or just K. You are unlikely to get a Prague passage from Kafka. It is the city where he was born, the city he walked and breathed. When a window opens, when a character commutes to the office, the place that appears, namelessly, is the city of his being. Specifics bring a sense of finality, but Kafka prefers the reality of shapelessness. As the legend goes, he rejected the suggestion of making the insect –Gregor Samsa’s metamorphosis—a cover illustration. The metamorphosis is what he imagined, what we imagine. In the Kafka Museum, it’s not ‘objects’ that tell his story; it’s an illustrated/multimedia biography which doesn’t tell anything more than what you have already read. A sample panel description: “He transforms Prague into an imaginary topography. The city takes a step back, and is no longer recognisable by its buildings, bridges and monuments. It is no longer important to identify a particular office, primary or secondary school, university, church, prison or castle, as these structures function in the role of metaphors and allegorical places.” Still, Kafka junkies follow Joseph K and know when he crosses Charles Bridge. What makes the place a museum are rare editions and manuscripts and trivia: the first edition of The Trial; its first chapter before the book was published; his letters to his father; and pages from his passport. Kafka indexed is very de-Kafkaesque.

THE industrialisation of Kafka is a tourism imperative. (I have been to two wonderful cafés, Louvre and Slavia, that claim Kafka and other greats as their legacy several times. And Slavia, just across the National Theatre, even gets a mention as National Café in the first sentence of Rainer Maria Rilke’s Prague story ‘King Bohusch’, published more than a century ago.) His deification, or his literary sainthood, is the result of misreadings—and of patronage, says the other K from Prague, Milan Kundera. The best I read on Kafka is in Testaments Betrayed: An Essay in Nine Parts. The Kafka we know was introduced to the world by the love and generosity of his friend Max Brod. As Kundera says, the idea of Kafka was also greatly damaged by Brod, who was the first one to make him “a saint of our time” in a novel he wrote, The Enchanted Kingdom of Love, after Kafka’s death. Kundera calls Brod’s novel “garbage” that, aesthetically, “stands at exactly the opposite pole from Kafka’s art.” It set the tone of what Kundera calls Kafkology, which “does not look to Kafka’s novels for the real world transformed by an immense imagination; rather, it decodes religious messages, it deciphers philosophical parables.” Kafkology denies Kafka the real world, “because apprehending the real world is part of the definition of the novel.” Is the tourist guide the new Kafkologist?

THERE is no Kundera walk in Prague, but new editions of his books in English are on the shelf. The city is very specific in his works. It’s the city where Tomas, in The Unbearable Lightness of Being, cleaned windows after the crushed Prague Spring. It’s the city Kundera fled in 1975; ten years later, he took French citizenship; and then he began to write in French. A couple of months ago, Kundera, now 90, and his wife Vera, were given back their Czech citizenship without any fanfare in Paris. For some Velvet Revolutionaries of 1989, he was the one who ran away. His fiction didn’t. I don’t think any other novelist captured the cruel joke of communism with such originality as he did. When I saw a bust of Klement Gottwald, the first president of communist Czechoslovakia, in the Museum of Communism, I wanted to return to the opening scene of The Book of Laughter and Forgetting, the novel that carries one of Kundera’s most quoted aphorisms: “The struggle of man against power is the struggle of memory against forgetting.” The novel opens with Gottwald and Vladimír Clementis, standing in a balcony at a public event in Prague. On that wintry day, Clementis puts his hat on his comrade’s head, and the gesture is immortalised in photographs. When Clementis was purged, and eventually executed, he was airbrushed out of photographs too. The hat on Gottwald’s head was the only reminder of memory’s struggle. There was no hat on the Gottwald bust in the Museum of Communism, which itself is a reminder of a nation’s struggle against power—against forgetting.

IN a Granta issue celebrating the new Europe after 1989, Kundera wrote an essay on Prague. It was an elegy, and he called it ‘A Disappearing Poem’: “Prague, the dramatic and suffering centre of Western destiny, is gradually fading away into the mists of Eastern Europe, to which it has never really belonged. This city—the first university town east of the Rhine, the scene in the fifteenth century of the first great European revolution, the cradle of the Reformation, the city where the Thirty Years War broke out, the capital of the Baroque and its excesses—this city tried in vain in 1968 to Westernise a socialism ‘that came in from the cold.’” In exile, home tends to become a disappearing poem. The Prague Kundera lost in his self-exile may never be recovered, but Prague would be liberated from the ideology that “came in from the cold.”

Václav Havel, the dissident who didn’t run away, liberation’s first philosopher king, may not have got a museum yet but, after Kafka, he is the writer Prague markets most. He was the soul of the Velvet Revolution, and along with him at the vanguard were other writers and singers and artists. They called it a revolution of amateurs, and it began in a basement theatre called Magic Lantern. As streets erupted against the Big Lie across Eastern Europe, the Velvet Revolution stood out for its literary content. As playwright, dissident, essayist and prison diarist, Havel made the struggle against communism an elegant argument for freedom and dignity. Dissidence is the purest expression of “apolitical politics,” he said, and it was all about “living in truth.” Magic Lantern was where the Velvet Revolutionaries met and conspired against tyranny. Magic Lantern has abandoned its revolutionary location; today it is part of the National Theatre. On New Year’s Eve there I saw Wonderful Circus, a multi-media fantasy in which two clowns, hatched out of two gigantic eggs, and manipulated by a sorcerer and a temptress Venus, play out a morality tale, and no words are spoken. In Laterna Magika on the last day of 2019, on the thirtieth anniversary of 1989, the joke was on the liberated.

I was alone when I stood there, there were no tourists around here in the National Theatre complex where a big red heart remembered Havel. This oversized heart by Kurt Gebauer is a worthy monument. Risking diarist’s vanity, let me disclose that I too possess a bit of Havel’s heart. When my then editor Dileep Padgaonkar and I went to interview the visiting Czech President in Delhi more than 25 years ago, we were like fan boys, and we carried with us many books of his to get autographed. And I brought that day’s Times of India, which on its edit page carried my article, ‘A Kafka in Politics’. He signed across the piece and what made his signature so special was his trademark flourish: a perfect heart sign.

In Old Town one afternoon, I strayed into the exhibition Czech Press Photo 2019 in the Old Town Hall. The award-winning entry by Lukáš Bíba is the image of a mass demonstration against Prime Minister Andrej Babiš, a billionaire accused of EU fraud, at Letna Park in Prague recently. It could have been a set piece from Wenceslas Square, circa 1989. The Velvet Revolution was a romance, as every other struggle for freedom elsewhere in Eastern Europe was. The management of freedom, as populists in power from Prague to Budapest to Warsaw show, abhors Havels. Still, on New Year’s Day, as I watched the Czech opera Libuše at the National Theatre, the future didn’t look bleak. It was an opera of national legend played on festive occasions, and a reassuring way for Prague citizens to begin the New Year. In the last scene of multiple reconciliations, Princess Libue, in prophetic ecstasy, thanks the gods and foresees a Czech land that will overcome all variations of evil. I wonder whether the Princess sang the same lines before 1989.

POSTSCRIPT: Other than the Big Ks, what else can make a Prague winter warmer? My suggestions: Prague Noir, edited by Pavel Mandys; Mr Kafka and Other Stories by Bohumil Hrabal; and Two Stories of Prague by Rainer Maria Rilke.