His legacy is secure after the World Athletics Championships 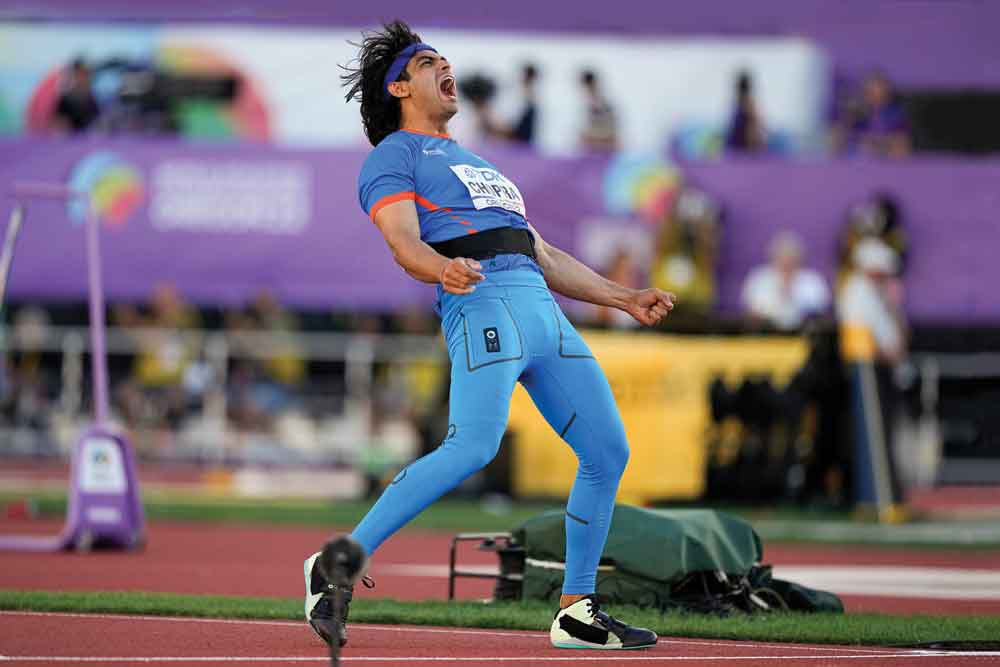 Neeraj Chopra celebrates after a throw at the World Athletics Championships in Eugene, US on July 23, 2022 (Photo: AP)


IT WAS 5:30AM in India on July 22 and I was up early to watch Neeraj Chopra in action. It had taken a few seconds for me to adjust channels and turn to the host broadcaster in India and open the World Athletics Championships App on my mobile phone. By the time I was settled in front of the TV, Neeraj was all set to pick up the javelin. He was the first athlete on show in the A cluster of throwers and had the typical swagger about him. A couple of screams to get himself going and he started his run. As he hurled the javelin, few could say from his face if he was satisfied with the throw. The TV frame turned to the spear and, just as it was about to land, we could see it had gone well past the 85-metre mark. As the distance travelled came up on screen, Chopra had broken into a smile. Thirty seconds is all it had taken for him. All in a day’s work! He had made the final and was about to leave the stadium and finish the mixed zone formalities.

It was exactly the same pattern that he had followed in Tokyo. The time of the throw was also the same, 5:35AM India time. Only now, it was two metres more and Chopra had yet again galvanised the nation. He was soon followed by Rohit Yadav and in a historic first for India we had two throwers in the javelin final at the World Championships.

To return to Chopra. While speaking to journalists in the mixed zone he was relaxed. It was as if he was aware he would qualify with a very good first throw and was determined to conserve energy and get ready for the final. Here was an athlete brimming with confidence and yet not a tad bit complacent. The Olympic medal has not changed him while he has managed to change the way the sport is perceived in the country. Chopra remains rooted and focused and continues to go about his job with the very same efficiency as always. To be able to shut out the outside noise is perhaps the best thing that Chopra has done and that’s what, I would argue, makes him different.

What has changed for Neeraj is the nation’s expectation from him. Ahead of Tokyo, we had all asked the question: Could Neeraj do it? Could he win India’s first-ever athletics medal and also the seventh in Tokyo? Having seen his swagger in qualification, it was logical to believe he had a chance. Yes, there was Johannes Vetter, but the German wasn’t at his best in qualification and many believed could wilt in the heat. Could it be Neeraj’s night and also India’s?

The first throw set it up: 87.03 metres was indication that Neeraj wasn’t overawed by the big stage. The 25-odd Indians in the stadium, which included 10 or so media personnel and 15 athletes and officials, had found voice. The world was beginning to see us all and many came up and asked if this was our first-ever athletics medal. They, too, wanted India to win. When Vetter and the rest failed to match Neeraj in their first attempt, each one of us had started to get tense. Was it history in the making? The Olympic stadium is a grand one and under lights was looking even more spectacular. And when Neeraj threw his javelin a second time, it just seemed to keep going. For the entire second or two that it travelled, we were all screaming. It was India travelling to sporting respectability with Neeraj Chopra. Trying to undo 100 years of underperformance on the Olympics stage. And when the javelin finally landed and the staff rushed to mark the exact point, we all had our hearts in our mouths. We knew it was a fantastic throw. What we did not know yet was if it was enough. Had he crossed his first throw and had he broken his own national record? That’s when the measurement flashed on the scoreboard—87.58 metres—and we were at a loss for words.

This Olympic gold medal-winning effort changed things forever. From being a challenger, Neeraj is now the favourite each time he throws. Yes, there is Anderson Peters, Vetter, Julian Weber and the others, but for a country starved of champions it just doesn’t matter. Most don’t really follow athletics closely and for them Neeraj Chopra is the champion destined to win every competition he participates in. To deal with this pressure day in and day out isn’t easy. Being a poster boy is not always fun. Posing for thousands of selfies and signing many autographs can get tiring. Answering hundreds of journalists for days on end can certainly get to you. And yet Chopra has managed this life with tremendous maturity, which is what makes him different and refreshing.


India was in search of a Neeraj Chopra. Someone who could change it all. Inspire a generation to believe that Indians could win on the world stage and thus transform a nation. Maybe that’s why he was trending the moment it was known he wouldn’t be able to defend his Commonwealth Games title because of an injury

From being a chubby kid who took up javelin in his village because his parents wanted him to play to winning India’s first-ever athletics gold at the Olympics and then going on to win multiple medals, including at the Diamond League and now at the World Championships, life has come full circle for Neeraj Chopra. He is now India’s leading sport brand alongside Virat Kohli and Rohit Sharma. And if he wins in Paris, we could certainly say he is India’s best-ever athlete of all time. Money isn’t an issue anymore and cash rewards won’t stop, for that’s not even relevant for Neeraj Chopra. Maybe that’s why he said: “If you take a look at some of the world’s greatest athletes, they are the greatest because they have been able to do it time and again. They have done it over years and across Olympic cycles. That’s what it is all about. Tokyo is now a thing of the past. Yes, it is a great memory and will forever live with me. But it is the past. Paris 2024 or Birmingham 2022 is the present. And the motivation is to do well in every single competition, in multiple Olympic Games, and leave behind a legacy that one can be genuinely proud of. That’s what motivates me all the time.”

India for a long time was in search of a Neeraj Chopra. Someone who could change it all. Inspire a generation to believe that Indians could win on the world stage and in doing so, transform a nation. Maybe that’s why he was trending the moment it was known he wouldn’t be able to defend his Commonwealth Games title because of an injury. While the country will miss him in Birmingham, it is far more important he recover from the minor groin strain and be ready for the Diamond League in Lausanne on August 26. Whether Neeraj knows it or not, the fact that he can inspire a billion is what will always be his most enduring legacy.