Belarus: Behind the curtains in Europe’s ‘last dictatorship’

The winds of change 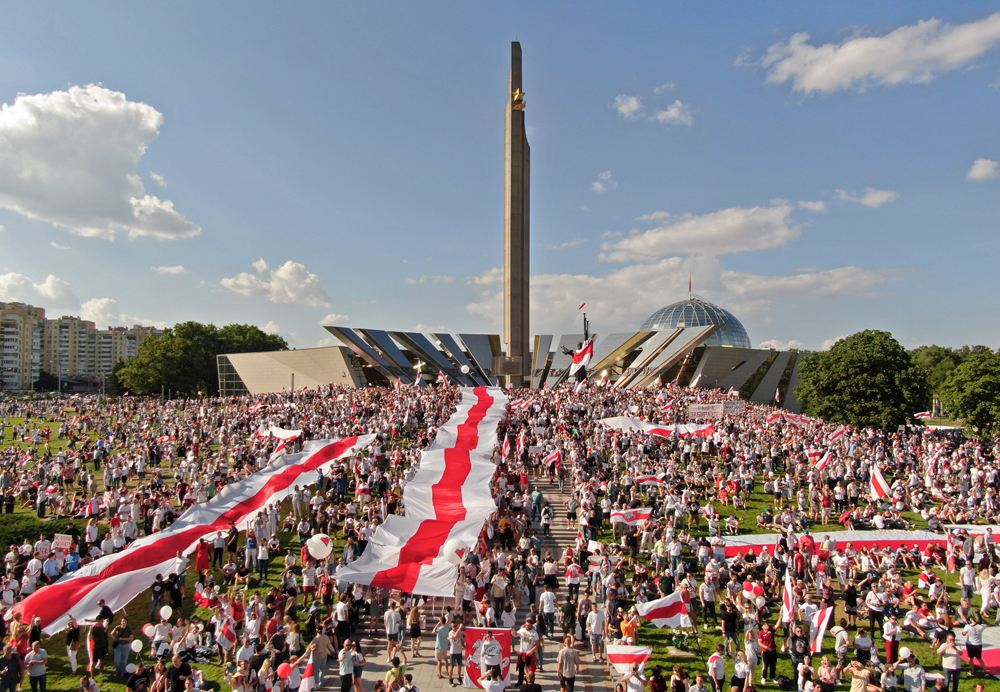 Protesters during a demonstration on August 16, 2020 in Minsk, Belarus (Photo: Getty Images)


After 26 years at the helm in Minsk, it looks like the strongman of Belarus Alexander Lukashenko might have few options but to resign as president. The former collective farm director who has ruled Belarus with an iron fist since 1994 is facing massive protests after being declared the winner of 80 per cent of the votes in a general election last week.

In the western classification of ‘good guy and bad guy,’ Lukashenko, with his pro-Russia policies, perfectly fits the role of a villain, but the reality is far more complex than that. Belarus has consistently fared better than neighbours Russia and Ukraine in many social indices. The country has apparently dodged the global Covid-19 pandemic without a lockdown of any kind. With decent infrastructure and good healthcare and educational facilities, Belarus is no Romania under Ceausescu. But the winds of change are blowing at a high speed in the country that is definitely a police state and a dictatorship.

Its citizens, already held in high esteem across the former Soviet Union for their manners, have added to their reputation during the recent protests against Lukashenko by showing what observers termed as “Gandhi-like” behaviour. Visuals on television showed protestors taking off their shoes before standing on public benches, of others stopping at a pedestrian crossing while running away from riot police since there was a red light!

Belarus, in popular imagination, is seen as the most Soviet of former Soviet states and four days in the country showed me why it had earned this reputation. In the summer of 2006 I was invited to spend a few days in Minsk by a Muscovite friend whose grandparents were Belarusian citizens. I was told that the city and country would feel a world away from Moscow. The temptation to visit one of the most insular countries in the world was too strong to resist.

The entire process of getting in and out of the country seemed like a bureaucratic maze that many of us in India are used to. Ever since the Soviet Union broke up, Belarus and Russia have remained close politically and have integrated economies, first with a union between them and then as a part of the Eurasian Economic Union, which counts Kazakhstan, Armenia and Kyrgyzstan as members. Russians and Belarusians have unrestricted access to each other’s countries the same way Indians and Nepalese can visit, work and live in the other country. So, a visa enquiry at the Belarusian Embassy in Moscow (at least in 2006) seemed like an oddity. After checking back and forth several times, I was told that I needed an notarised invitation from my friend’s grandmother, along with copies of her internal passport (many former Soviet states have separate internal and international passports). Once this was arranged, I was all set to go ‘back to the USSR.’

There were few, if any, active border checkpoints between Russia and Belarus in 2006. People who went by cars would be subject to a random check somewhere on the highway. Border guards would also enter train carriages but there was no system in place for passport control and entry and exit registration. Any visitor who enters Russia gets a migration card that shows it is for both Russia and Belarus, so there is some kind of common online register.

We took an overnight night train to Minsk from Moscow and were clueless as to when we entered Belarus, since there were no checks of any kind. The official at the Belarusian embassy in Moscow asked me to register with the police on arrival at the main railway station in Minsk, but when I did arrive in the city and approached a couple of on-duty policemen, they said I had to do so in the city.

This vagueness about the law already made me feel uncomfortable, but this was just a taste of things to come. When my friend’s grandmother tried to register my visa with the local authorities, I was told that since I wasn’t going to be in the country for three working days, I did not need to register. So there I was in the country, without any proof of my arrival officially registered. It was a Friday and my Russian friend and I figured that if needed, we could think of something on Monday when we were heading back to Moscow.

Run-in with the state

It was a huge cultural shock to be in Minsk after living in Moscow. There were no flashy billboards or western luxury showrooms and the whole city had a 1980s air about itself. Food and drinks in Soviet style canteens cost a small fraction of what they did in the Russian capital. Minsk was also ridiculously quiet, clean and peaceful.

I am pretty sure that Soviet Moscow would have never been the way Minsk was, but the Belarusian capital, which at that time hadn’t changed in decades, would fit in neatly in any corner of the USSR. My run-in with the brutal state that Lukashenko has maintained and strengthened since the mid-1990s happened on a park bench on a lovely Friday afternoon.

While I was sharing my impressions of the city with my Muscovite friend, we were interrupted by local police. Before even asking for our identification, they assumed they knew who and what we were. “Young man, why aren’t you in the university campus at this time,” a policeman in his 40s asked. They asked my friend why she wasn’t at work. She apparently didn’t look young enough to be a student! When we answered that we were visitors, they asked for our passports. “Where is your entry stamp,” the older of the two policeman asked. When I replied that my passport was not checked and stamped when I crossed the border, they said I had illegally entered the country. My friend, being a Russian passport holder, was not subject to similar questions, but they asked both of us about the purpose of our visit. Here was the border control that we weren’t subjected to when entering Belarus!

Unhappy with our explanations and answers, we were taken to the nearest police station. We stood our ground and said we followed all possible laid out measures and even attempted to register my passport and visa with the authorities, but that was of no use. I was threatened with legal protocols over my unauthorised entry to the country. I told them I was ready to face these protocols but I would like an employee of the migration service or visa office to be present. My friend who had mentioned that we were visiting and staying with her grandmother then gave the police the landline number of the apartment. After verifying the story, the police officer told me that they would let me go “just this once,” and that they were not responsible for what could happen to me at the Belarus border when I left! They then asked me to sign a form admitting administrative guilt, which I stubbornly refused. We were finally allowed to leave after three hours.

The weekend centred around conversations with my friend’s relatives and friends about the powerful state and how citizens just complied with diktats from the government. Despite being a visible foreign face, I was not stopped by police over the next two days and got a glimpse of this well maintained still-very-Soviet country. It’s beautiful countryside felt like the inner pages of a Dostoyevsky novel.

On Monday we took the train back to Moscow and again, it felt like taking an inter-city Shatabdi express in India. The only difference was that there was a random check in the Russian side for documents. When I briefly told the Russian border guards about my experience in Belarus, they laughed and said the Belarusian police were just trying to show me who was boss! After this experience in Belarus, not a single negative thought came to my mind when complying with Russian visa, registration and residency regulations. I had seen and dealt with something worse. Far far worse! But my heart genuinely went out to the beautiful and cultured people of Belarus. How on earth could they put with such a tin-pot dictator for so long! 14 years after my one and only visit to the ‘last dictatorship’ in Europe, crowds shout for Lukashenko to leave. Yes, Uncle Sasha, listen to the 200,000 who turned up in Minsk to tell you what they want. Listen to striking factory workers, media persons and residents of small towns across the country.