Are We All Winners?

The love and hate of competitions 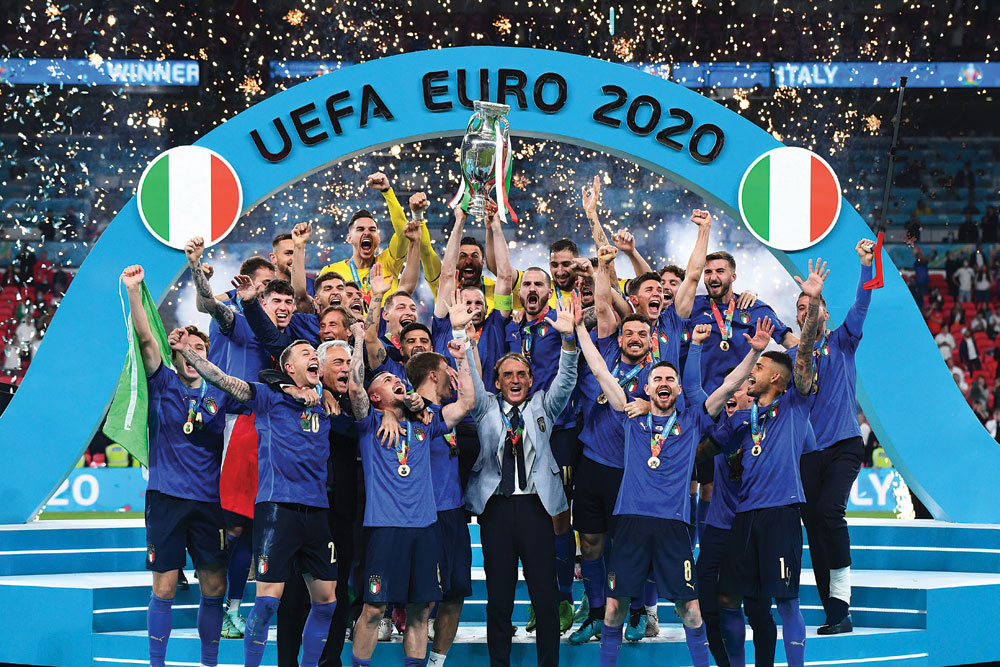 
SPORT IS A cruel enterprise. The fruits of hours, and days, and years of practice are determined in a matter of seconds. July has certainly been the month of near losses and epic wins. And that is the thing with sport, the line between victory and defeat is minute, yet so definite. Over the last few weeks, we have witnessed the caprice of defeat and the whimsy of victory. Penalties deciding the fate of UEFA Euro 2020 remind us how the cup could so easily have gone to the other team. The sweat and toil of 90 minutes comes down literally to two men, one who will kick the ball, and the other who will try to stop it from entering the goal. At the Tokyo Olympics, in a deeply anticipated showdown, Ariarne Titmus of Australia defeated Katie Ledecky of the US in the 400-meter freestyle, beating the reigning champion by two-thirds of a second. Milliseconds decide who kisses the gold and who the silver. A blink of an eye, and we have a winner and a loser. But do contests truly bring out the best?

Which brings one to the word of this sport-inundated July, it has to be competition. It has been a month where the greatest sports events have graced our screens. I confess at the start that I am at best a sports bystander. If people around me are invested in a game, I will draw up a chair and even pump the air. I need to be rallied into enthusiasm by a cohort of cheerers. Given the many events of this July, from the Wimbledon Final to the Euro Cup to Copa América to the Olympic Games, I was rivetted to the screen. Even for someone who is not a regular sport watcher, these events are too large, too grand, too international to skip altogether. The drama of it, the tears, the cheers, the groans, the gasps, draws us all in.

The vagaries of competition are such that it is often better to come third rather than second. A guide to The Circus Maximus in Rome once mentioned that for the charioteers it was preferable to come third rather than second. We now know that the proclivities of ancient Rome continue today. In 1995, three scientists, VH Medvec, SF Madey, and T Gilovich published a paper, When less is more: Counterfactual thinking and satisfaction among Olympic medalists in Journal of Personality and Social Psychology. They found that those who “are objectively better off nonetheless feel worse”. Their analysis of winners at the 1992 Summer Olympics in Barcelona “both at the conclusion of their events and on the medal stand—indicates that bronze medalists tend to be happier than silver medalists”.

If competition is essentially about the ‘best’ defeating the others and about ranking the rest, then the second ought to be happier than the third. But “research on counterfactual thinking has shown that people’s emotional responses to events are influenced by their thoughts about ‘what might have been.’” The sportsperson with a bronze is glad to have got a medal, rather than no medal. The athlete standing with the silver is thinking, ‘What if, I’d been two-thirds of a second faster. Just as the English soccer team is thinking, ‘What if we hadn’t missed three of five penalties…we could have taken the Cup home.’

Watching sport events, one is reminded of the very many ways that competitions bring out the best and worst in us. Neymar Jr congratulating Lionel Messi with an emotional hug after Argentina defeated Brazil 1-0 in the Copa America final, while the Argentinian team celebrates right behind them, was quickly framed as one of the favourite moments of the tournament, one where camaraderie deposed rivalry. For one brief second, Messi even nudges aside his exulting teammates so that his Neymar embrace can continue. At the end of the hug, as Neymar walks away someone is seen even offering him a tissue. It is a hug that reminds us that even if in every game, there are winners and losers, there are finally only great players.

The same evening one of the worst offshoots of competition quickly unfolded. English fans stormed Wembley, past hapless gatekeepers and stewards, and were seen assaulting Italian fans on camera. In a frightening video grab they kick an Italian supporter who lies on the ground and tries to defend his face. With England losing to Italy 3-2 on penalties, fans (or more precisely hooligans) descended into punches and destroyed public property. These aren’t ‘fans’, someone said, these are ‘drunk yobs’.

In the run-up to the Euro 2020 final, the Daily Mail ran an article about the ‘science behind football fan behaviours’. The anthropologist Martha Newson of the University of Kent, explained, “The psychology underlying the fighting groups we find among fans was likely a key part of human evolution. It’s essential for groups to succeed against each other for resources like food, territory and mates, and we see a legacy of this tribal psychology in modern fandom.” She went onto say that the behaviour of hooligans might be restricted to the game, outside of the game, they might not be anti-social elements.


In sport, the line between victory and defeat is minute, yet so definite. At the UEFA Euro 2020 final, we witnessed the caprice of defeat and the whimsy of victory. The Cup could so easily have gone to England and not Italy

Football hooliganism is a fringe element but it clearly illustrates how competition can bring out the most animal instincts. Competition is, of course, central to the animal kingdom. In the natural world, competition is most typically considered “the interaction of individuals that vie for a common resource that is in limited supply, but more generally can be defined as the direct or indirect interaction of organisms that leads to a change in fitness when the organisms share the same resource. The outcome usually has negative effects on the weaker competitors.” In an article in Nature titled, Species Interactions and Competition, the authors write, “…Mechanism for avoiding competitive exclusion is to adopt alternative life history and dispersal strategies, which are usually reinforced through natural selection. This mechanism reduces competitive interactions and increases opportunities for new colonization and nutrient acquisition.”

I pause at the phrase ‘adopt alternative life history’. As a society, we are yet to identify a possible substitute for competition. In business and trade we know that competition dissuades monopolies, it lowers the costs of goods and services, it allows for greater variety, innovation, efficiency and even overall economic development and growth. In the natural world, ‘survival of the fittest’ is considered the foundational norm. But given that there too are ways to avoid competition, perhaps, in our lives there are alternative models as well.

I studied at a residential boarding school where exams started only in Class IX and where Sport Day was most often a desultory affair. Based on the teachings of philosopher and speaker Jiddu Krishnamurti the school tried to inculcate ‘cooperation’ and not ‘competition’. Competitiveness is often seen as a biological trait. Competition is considered a necessary motivating factor. But if the motivation does not have to come from external rewards and instead arises from internal factors, then there might not be a need for competition itself.

In a school, this might seem like a quixotic idea. But the success of the Jiddu Krishnamurti schools over the decades shows that the idea does have merit.

One of my abiding memories from school is the senior school exams, where the teachers would often not bother to invigilate, they would read a book, or walk out of class altogether. I remember no one really bothering to cheat or discussing the answers. The absence of ranks rendered cheating redundant. The lack of competition did not mean an erasure of motivation, it simply meant finding motivation from within and not from a conventional ‘carrot or stick’ system.

Krishnamurti’s schools, which question competition, perhaps, resemble the societies studied by Margaret Mead, an American cultural anthropologist. In her book Cooperation and Competition among Primitive Peoples (1937), she writes of several societies that did not prize competition. Her research, based on various cultures, showed that competitiveness is a culturally created aspect of human behaviour. In a chapter on the Arapesh, a Papuan-speaking community of around 8,000 people, she writes how for the Arparesh cooperation was obtained through helpfulness and not rivalry and competition.

Krishnamurti and Mead perhaps envisioned a similar utopia. She would agree with Krishnamurti that “real learning comes about when the competitive spirit has ceased”. I hear their words and even agree partly with them. But then I return to the screen, to read and watch the great victors in sport, and to celebrate the fastest, the highest and the strongest.

Steeped In the Fabulous