Vivekananda and the Himalayan connection—Part VII 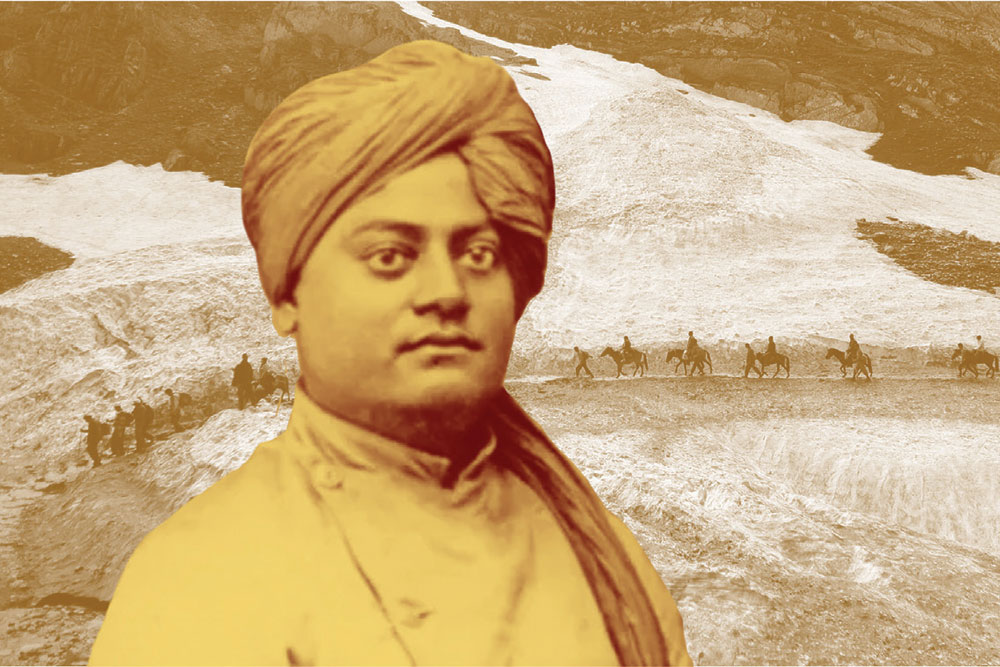 
SWAMI VIVEKANANDA’S TRIP to the Himalayas with his group of Western devotees was, as we have seen, quite eventful. Especially when it came to the interpersonal dynamics between him and his chief disciple, Sister Nivedita. The journey to the mountain top, so to speak, was arduous not just physically, but psychically and spiritually.

The party left Almora on June 10th, 1898. Descending to Kathgodam, they entrained for a long rail ride to Rawalpindi, via Delhi and Lahore. Jo, or Josephine McLeod, one of the American ladies in the party and Vivekananda’s friend, describes how the remaining 200 miles up into the Himalayas, all the way to Kashmir, were traversed in tongas or horse-drawn carts. ‘There were relays of horses every five miles,’ recalls Jo, ‘so that we dashed through on top of this beautiful road, as perfect then as any road the Romans ever made’.

At Baramulla, the group shifted to four, large houseboats: ‘These boats called dungas are about seventy feet long and broad enough to have two single beds in them and a corridor between, covered with a matting house; so wherever we wanted a window we only had to roll up the matting. The whole roof could be lifted in the day-time, and thus we lived in the open, yet knew there was always a roof over our heads’ (ibid).

Sara Chapman Bull and Jo occupied one boat, Nivedita and Mrs Paterson, the US Consul General’s wife, another. Vivekananda had the third to himself. The fourth boat was their designated dining hall. After September, when it got colder, they took houseboats with fireplaces in them.

The group’s routine was centred on Vivekananda, their leader and teacher: ‘Swami would get up about half past five in the morning, and seeing him smoking and talking with the boatmen, we would get up too. Then there would be those long walks for a couple of hours until the sun came up warm; Swami talking about India, what its purpose in life was, what Mohammedanism had done and what it had not done. He talked, immersed in the history of India and in the architecture and in the habits of the people, and we walked on through fields of forget-me-nots, bursting into pink and blue blossoms, way above our heads’ (ibid).

Yet, behind this idyllic routine were several tensions, some as we shall see later, quite severe.

At stake were hard lessons in leadership. As his biographies by Eastern and Western disciples record, Vivekananda in Kashmir often spoke of the qualities of a true leader. He said: “A leader is not made in one life. He has to be born for it. For the difficulty is not in organisation and making plans; the test, the real test of a leader lies in holding widely different people together, along the line of their common sympathies. And this can only be done unconsciously, never by trying”.

For any guru, personal charisma and magnetism are double-edged swords. Such qualities inspire immense devotion, even adoration, in the faithful, helping to execute the guru’s mission and work in the world. Vivekananda’s personality was so magnetic and riveting that there was scarcely anyone of note who came in contact with him without succumbing, at least partially, to its force.

After his death, Jo vividly remembered just how powerful an impression Vivekananda had made on her: ‘The thing that held me in Swamiji was his unlimitedness. I never could touch the bottom—or top—or sides. The amazing size of him!… Oh, such natures make one so free’.

Vivekananda, well aware of the dangers of being so attractive and appealing to his followers, knew that it might lead to jealousy and competition between members of his flock. He believed that the rectitude of impersonal love on his part could serve as an antidote. As he had cautioned Sister Nivedita in a letter in 1897, ‘It is absolutely necessary to the work that I should have the enthusiastic love of as many as possible, while I myself remain entirely impersonal. Otherwise jealousy and quarrels would break up everything.’


Vivekananda’s poem ‘to the fourth of July’, addressed to the sun of liberty, celebrates the spirit of the US. It was also from here, in the houseboats in Srinagar in July 1898, that he wrote the poem, ‘To the awakened India’. Clearly, he had a plan for an Indo-US material and spiritual partnership whose deepening and unfolding we are still in the midst of

In the same letter, Vivekananda went on to spell out at considerable length his idea of ‘impersonal love’: ‘A leader must be impersonal. I am sure you understand this. I do not mean that one should be a brute, making use of the devotion of others for his own ends, and laughing in his sleeve meanwhile. What I mean is what I am, intensely personal in my love, but having the power to pluck out my own heart with my own hand, if it becomes necessary, ‘for the good of many, for the welfare of many,’ as Buddha said. Madness of love, and yet in it no bondage. Matter changed into spirit by the force of love. Nay, that is the gist of our Vedanta.’

But how difficult such ‘madness of love’, without the slightest trace of bondage, would be. How difficult to change ‘matter into spirit by the force of love’. This Nivedita was to realise the hard way. Vivekananda’s clear warning, unfortunately, failed to save Nivedita from the suffering in store for her on this trip.

Matters would come to a head on their Amarnath pilgrimage. But till then, there were pleasant moments aplenty for the group. One of these underscored the Swami’s devotion to the US, demonstrated in his surprise celebration of America’s Independence Day on July 4th. He even got a local tailor to rig up a flag, with stars and stripes, which was pinned to the dining room boat. The result, though not entirely satisfactory, was certainly significant for symbolic import.

For the occasion, Vivekananda wrote his well-known poem, ‘To the Fourth of July’, preserved for posterity by Mrs Bull, or ‘Dhira Mata’, as the Swami had rechristened her:

A welcome new to thee, today,
O Sun! Today thou sheddest Liberty!
Bethink thee how the world did wait,
And search for thee, through time and clime.
Some gave up home and love of friends,
And went in quest of thee, self-banished,
Through dreary oceans, through primeval forests,
Each step a struggle for their life or death;
Then came the day when work bore fruit,
And worship, love, and sacrifice,
Fulfilled, accepted, and complete.
Then thou, propitious, rose to shed
The light of Freedom on mankind.
Move on, O Lord, in thy resistless path!
Till thy high noon o’erspreads the world.
Till every land reflects thy light,
Till men and women, with uplifted head,
Behold their shackles broken, and
Know, in springing joy, their life renewed!

The poem, addressed to the sun of liberty, also celebrates the spirit of the US.

The Swami’s passionate advocacy of liberation and freedom are amply evident here. It is, perhaps, no surprise that he chose the same day, three years later, to slough his mortal coil. It was also from here, in the houseboats in Srinagar in July 1898, that Vivekananda wrote the poem, ‘To the Awakened India’ (cited in ‘Awakening India’, Open, November 9th, 2020). Clearly, Vivekananda had a plan for an Indo-US material and spiritual partnership whose deepening and unfolding we are still in the midst of.

By July 25th, the party left for Achhabal, enjoying the Moghul Gardens. That is where the plan was made for Nivedita to accompany Vivekananda to the sacred grotto of Amarnath, with its seasonal giant ice Shivalinga. Giving both master and disciple some privacy, the other members of the party stayed behind, while Vivekananda and Nivedita strode on ahead.

Travelling via Islamabad, Pahalgam, Chandanwari, Seshnaag and Panchtarani, the duo reached Amarnath on August 2nd. The journey itself was strenuous as it was picturesque. The pilgrim host of 2,000-3,000 marched in a neat and orderly fashion, carrying, as it were, ‘a bazaar with them’. Nivedita found remarkable the hundreds of monks, with their ochre tents, ‘some no larger than a good-sized umbrella’ (bit.ly/38gj7QD).

For Nivedita, the Amarnath yatra was the most important, most keenly awaited part of her Himalayan journey.

Expectant and eager, she looked forward to nothing less than an epiphany, an initiation into the deepest mysteries of spiritual awakening and transformation, at the hands of her master, Swami Vivekananda.