Vivekananda and the Himalayan connection—Part III 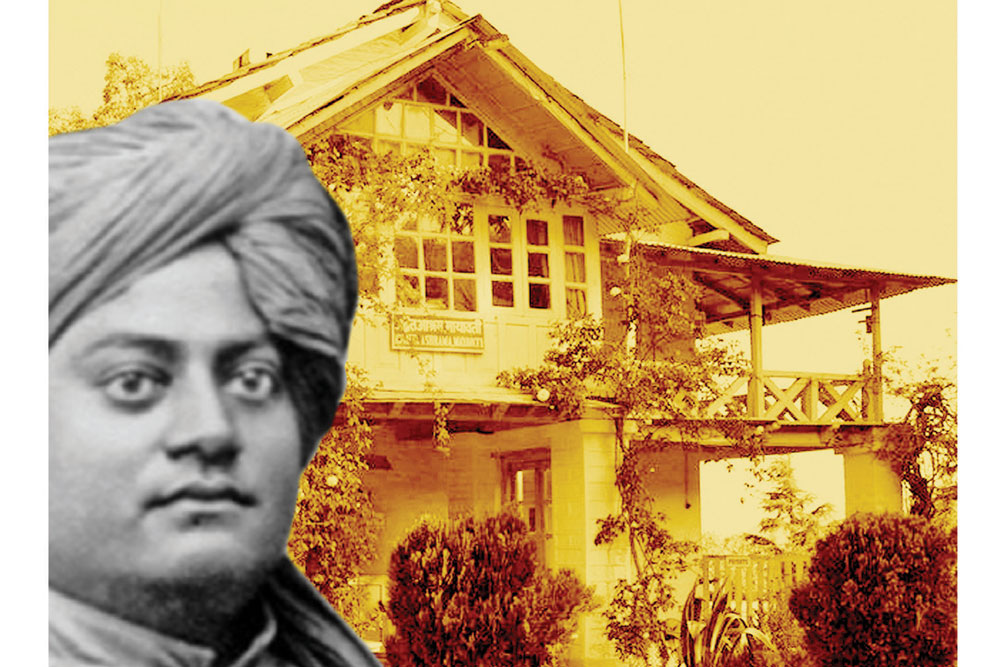 
SO KEEN WAS Swami Vivekananda on a Himalayan retreat that on December 27th, 1899 he wrote to one of his disciples, Christina Greenstidel:

“I will buy a little place in the Himalayas—a whole hill—about say, six thousand feet high with a grand view of the eternal snows. There must be springs and a tiny lake. Cedars—the Himalayan cedar forests—and flowers, flowers everywhere. I will have a little cottage; in the middle, my vegetable gardens, which I will work myself—and—and—and—my books—and see the face of man only once in a great while”.

As we have already seen, it was Captain James Henry Sevier and his wife Charlotte Elizabeth, who made Vivekananda’s dream come true.
The Seviers met Swami Vivekananda during the latter’s second visit to London in 1896. Impressed by his lectures, they requested a private audience with him. Vivekananda addressed Charlotte as ‘Mother’, appealed to her to come back to India and promised that he would give the couple his ‘best realisations’.

Sailing back from Naples with Vivekananda in November, the Seviers rented a home near Almora. Two years later,in 1898, they found a secluded tea estate at a height of 1,940 m, recessed in a thicket of deodars, pine and oak, affording spectacular views of the snowy mountains. Nine km from Lohaghat in Champawat district, Uttarakhand, it is known as Mayavati. That is where the Seviers, along with Swami Swarupananda, founded the Advaita Ashrama on March 19th, 1899.

The following year, still in the US, Vivekananda referred to Mayavati and the Seviers in his lecture ‘Is Vedanta the Future Religion?’ delivered on April 8th, 1900 at San Francisco:

“… on the heights of the Himalayas I have a place where I am determined nothing shall enter except pure truth. … There are an Englishman and an Englishwoman in charge of the place. The purpose is to train seekers of truth and to bring up children without fear and without superstition. They shall not hear about Christs and Buddhas and Shivas and Vishnus—none of these. They shall learn, from the start, to stand upon their own feet. They shall learn from their childhood that God is the spirit and should be worshipped in spirit and in truth. Everyone must be looked upon as spirit”.

Consequently, when he visited in 1901, Vivekananda criticised attempts to institute dualistic worship, including images of Sri Ramakrishna himself. Yet, those used to such modes of worship continued with the shrine to Sri Ramakrishna till March 1902. When it was removed, some were unhappy to be deprived of it. It is only when the Sarada Ma, Ramakrishna’s consort also known as Holy Mother, intervened in favour of unalloyed Advaita that the matter was resolved.

Earlier, in July 1898, the Seviers, at Vivekananda’s behest, had revived Prabuddha Bharata, the Ramakrishna Mission’s English magazine, with Swarupananda as its editor. Originally published from Madras (now Chennai) since 1896, the magazine floundered in July 1898 with the untimely death from acute nephritis of its founding editor, BR Rajam Iyer.

Vivekananda requested Captain Sevier to assume responsibility of its publication. Sevier bought a hand press, type for letterpress printing, paper, ink and all the necessary equipment from Calcutta (now Kolkata), transporting it all the way to Mayavati in Kumaon. Vivekananda wrote a rousing poem in vira rasa (the heroic mode) to commemorate this historic revival, linking it with the rebirth of India, which is the meaning of the name of the journal:

‘To the Awakened India’

Once more awake!
For sleep it was, not death, to bring thee life
Anew, and rest to lotus-eyes for visions
Daring yet. The world in need awaits, O Truth!
No death for thee!

India’s revival and renaissance was not for itself alone, but for the whole world. For it was the custodian of a truth that was of great value to all humanity. Indeed, despite its downfall, India remained the awakener of higher conscious:

Resume thy march,
With gentle feet that would not break the
Peaceful rest even of the roadside dust
That lies so low. Yet strong and steady,
Blissful, bold, and free. Awakener, ever
Forward! Speak thy stirring words.
Thy home is gone,
Where loving hearts had brought thee up and
Watched with joy thy growth. But Fate is strong —
This is the law — all things come back to the source
They sprung, their strength to renew.

Prabuddha Bharata, as suggested earlier, was a symbol of awakened India itself. Vivekananda underlined how the rebirth of the journal coincided with its relocation to the Himalayas, which he considered the birthplace and nursery of ancient Indian wisdom:

Then start afresh
From the land of thy birth, where vast cloud-belted
Snows do bless and put their strength in thee,
For working wonders new. The heavenly
River tune thy voice to her own immortal song;
Deodar shades give thee eternal peace.

Apart from the flora and fauna of the Himalayas, he also invoked Goddess Parvati, the daughter of the mountains:

And all above,
Himala’s daughter Umâ, gentle, pure,
The Mother that resides in all as Power
And Life, who works all works and
Makes of One the world, whose mercy
Opens the gate to Truth and shows
The One in All, give thee untiring
Strength, which is Infinite Love.

The blessings he sought were not only for the journal, but for India itself:

They bless thee all,
The seers great, whom age nor clime
Can claim their own, the fathers of the
Race, who felt the heart of Truth the same,
And bravely taught to man ill-voiced or
Well. Their servant, thou hast got
The secret—‘tis but One.
Then speak, O Love!
Before thy gentle voice serene, behold how
Visions melt and fold on fold of dreams
Departs to void, till Truth and Truth alone
In all its glory shines—

He prophesied that India would rise once more, awakened as it were, from her long slumber, inspiring other nations to greater heights of consciousness:

And tell the world—
Awake, arise, and dream no more!
This is the land of dreams, where Karma
Weaves unthreaded garlands with our thoughts
Of flowers sweet or noxious, and none
Has root or stem, being born in naught, which
The softest breath of Truth drives back to
Primal nothingness. Be bold, and face
The Truth! Be one with it! Let visions cease,
Or, if you cannot, dream but truer dreams,
Which are Eternal Love and Service Free .

This was the true meaning of India, according to
Vivekananda, to which Prabuddha Bharata was dedicated. To be bold, to face the truth, to realise it, to serve all humankind empowered by this embodiment of eternal love and free service.

Captain Sevier died in October 1900, the year after Advaita Ashrama was founded. He had not only spent lavishly to buy and fund Mayavati, but earlier generously donated money to members of Vivekananda’s family too. On his return to India in December 1900, Vivekananda heard the news of his disciple’s death.

On December 11th, writing to Josephine MacLeod, he referred to Sevier as one of two ‘great Englishmen’, the other being his British stenographer, JJ Goodwin, who ‘gave up their lives for us—us, the Hindus. This is martyrdom, if anything is’. On December 26th, he wrote again, ‘He was cremated on the bank of the river that flows by his ashrama, a la Hindu, covered with garlands, the brahmins carrying the body and the boys chanting the Vedas. … It makes me love dear England and its heroic breed’. The Swami rushed to Mayavati, snowbound in January 1901, to condole with Mrs Sevier.

‘Mother’ Charlotte continued to stay at Mayavati for many years before returning to England. She passed way in 1930 at the age of 83. Her remarkable story of dedication, idealism, sacrifice and spiritual progress is told by Amrita M Salm in Mother of Mayavati: The Story of Charlotte Sevier and Advaita Ashrama (Advaita Ashrama, Mayavati, 2013).

The Dialectics of Devotion

The Tranquil State of Freedom

Born on the Fifteenth of August