On an island off Adelaide, bush fire wreaks havoc on the future of wildlife 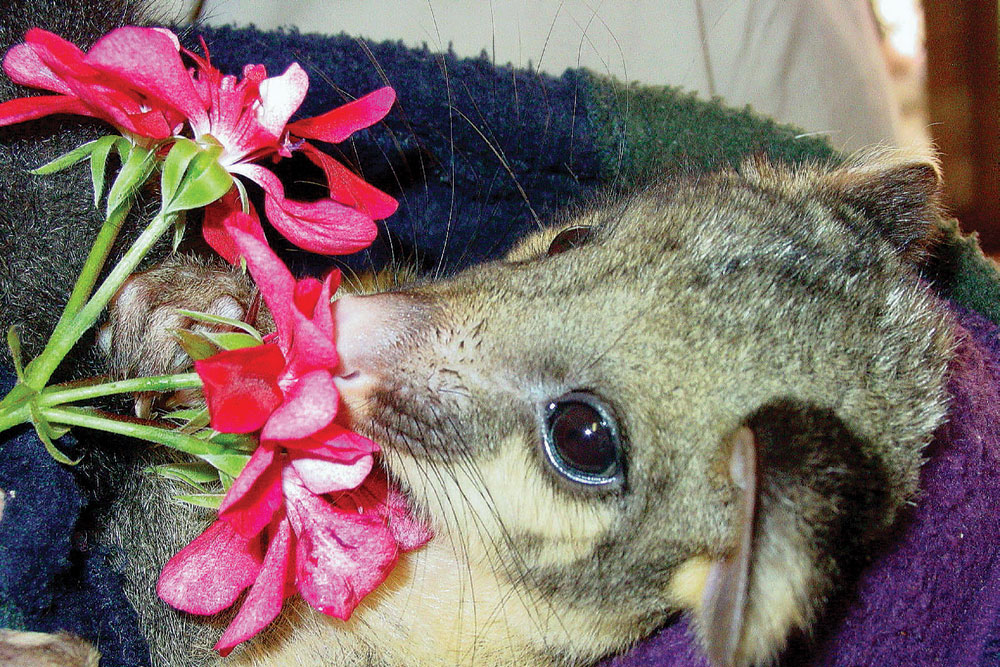 A rescued possum being treated at a rehab centre in Australia (Photo: Vivek Menon)


‘Upon the wicked he shall rain snares, fire and brimstone, and a horrible tempest, this shall be the portion of their cup’
—Psalm 11:6 King James Version, New Testament

FIFTEEN YEARS AGO, after the classical convulsions of a literary fiesta at Adelaide, my wife and I retreated to a sylvan sanctum on Kangaroo Island to recoup. The third largest island off the shores of the largest island in the world, Kangaroo Island, was a short ferry ride away from the city of churches. What drew us to the island was its much vaunted ‘zoo-without-fences’ or ‘best place to see native Australian fauna label. Added attraction was the aesthetics of the land: vast unbroken tracts of mallee and eucalyptus woodland, fringing white-sand beaches adjoining a turquoise sea. However, it was the animals that were the main draw. Separated from the mainland for over 10,000 years, the island has evolved its own unique fauna and flora. The sooty dunnart, a small marsupial, is unique to the island although very difficult to see. The Kangaroo Island Koala and the Kangaroo Island Glossy Black Cockatoo have all its populations restricted to the island. The short-beaked echidna, the southern brown bandicoot and the Tammar Wallaby have large populations that are easy to see on this refuge. One reason that so many rare species are found wandering in the open on the island is the absence of the fox, or for that matter, most forms of predators. The largest predator on land is the Rosenberg’s goanna, a 1.5 m monitor lizard that breeds on the island. Even more importantly, that other introduced scourge of Australia, the European rabbit, has also not made the hop onto Kangaroo Island. Thus, exotic diseases are contained and competition for a herbivore is only among native fauna. On the beaches, amidst rock formations, the Australian sea lions and the New Zealand fur seals find a place to rest unmolested with little penguins and Barren Island geese patrolling the coastline. In the seas, eighteen species of cetaceans cavort the waves. It sounded like an Eden and turned out to be just so. We spent a long weekend walking the beaches amidst the sea lions and geese and tramping the boardwalks in Flinders Chase National Park. We climbed the Remarkable Rocks and posed under the Admiralty Arch watching fur seals. Under spiny salt bushes we saw echidnas nosing around their home base. Every morning we saw swarms of glossy black cockatoos taking to the sky and almost everywhere in the eucalyptus, we saw large teddy bears hugging the white barks with a tenacious grip that foretold a fate that the koalas probably saw coming, a decade-and-a-half ago.

Late last year, just before Christmas, what is widely believed to be a lightning strike set off a fire in the bush on the island. The fires burnt week after week even as firefighters and volunteers tried to limit the damage. A father and son were overtaken by leaping flames in their car and burnt to death. By early January this year, half of the 215,000 hectares of the island was burnt to cinder in the cataclysm. The wildfires were not restricted to Kangaroo Island and in fact has consumed 6.3 million hectares of the Australian bush and killed an estimated 500 million wild animals. But in Kangaroo Island, the fires burnt through the south-western corner of the island which housed the intact primeval south Australian Noah’s Ark that had been the home for much of its unique fauna and flora. Unlike on the Australian mainland, the fauna of Kangaroo Island did not have a place to retreat to or flee from the fire. Rescuers talk of charred kangaroo, koala and cockatoo carcasses dotting the island. It is estimated that at least half of the koalas are dead or displaced. A numerical estimation of the loss of the smaller dunnart, the bandicoot or the pygmy possum is still not possible given the intense blaze and the vast terrain to cover for firefighters. It will probably be months before a true estimate of the loss of animal life emerges and from that point in time, one will have to piece together the enormity of biodiversity loss to the planet. For unlike continental Australia, what is lost on Kangaroo Island does not exist on any other part of the planet. The loss of lives on this island could be an evolutionary end to a whole line of animals and plants. This loss could be their death knell on planet earth.

So, what could we have lost? I have looked more carefully at two creatures that most captivated me during my visit fifteen years ago; the all-black Polly and the charismatic teddy bear. The Ashy Pouched Bear, if the koala’s Latin nomenclature, Phasalarctos cinereous, was literally translated into English, is an arboreal marsupial that evolved in Australia some 35 million years ago. The Koala (a name that could have originated from aboriginal names that included cullawine, kollo and koolah) has had booms and busts across Australia through its prehistory that bears co-relations to both climate change and human presence; particularly pressures due to hunting. Koalas are probably the most instantly recognisable Australian mammal, arguably even more than kangaroos. Their cuddly, soft looks and round forward-facing eyes make them the ambassadors of the Australian mammalian world. Even though kangaroo species have been far more widespread across Australia and biologically much more successful than koalas, it is the latter that people go to see in zoos and wildlife parks, make films on and want to show their children. Not many are aware that the koalas are susceptible to a deadly fungal infection caused by Chlamydia pecorum that has been sweeping through the Australian mainland koalas.

THE KANGAROO ISLAND Koala, in that aspect, is a rare commodity; not a different race or species, but just one that is free from the disease that is affecting all the mainland koalas. The fungus has not made the deadly jump across the straits. On the island, koala numbers were doing much better than the mainland and when they numbered 50,000, the southern Australian wildlife authorities started a contraceptive programme fearing that their burgeoning numbers would soon cause damage to native vegetation! That was as recently as 2019. But then came the bushfire which has wiped out, in two successive blazes in one month, more than half the population of this charismatic marsupial. And the world’s attention was captured. The internet filled with stories of charred koalas. Firefighters offering water in their cupped hands to lost-looking koalas started circulating and rescue organisations built their emergency relief plans and funding based on the plight to the koala. The burning teddy captured hearts and minds and did what a charismatic mega fauna must do in the brave new world.

The attention that the koala has garnered could possibly help the smallest of the black cockatoos, the Kangaroo Island Glossy black cockatoo that is far more endangered than the marsupial. The island sub-species numbered only about 370 last year. That was considered a great conservation success as at one point their numbers had dipped down to 158. The cockatoo is known only from Kangaroo Island today, with the last mainland bird having been seen in 1977. On the island, the entire population is confined to six flocks in one area. But then came the blaze that burned brighter than the red glow of the caudal feathers of the male bird and it is feared that many of this parrot, that was only discovered as late as 1807 by the Dutch naturalist Cooenrad Jacob Temminck, would have become incidental cinder. Even more worrying is the huge dependence that these birds have on a single tree species, the Drooping She-oak (Allocasuarina verticillata) of which they tend to eat only the most recent season’s cones leaving behind those of the season before.

But how could these vast stands of She-oaks and sugar gums, such that spread an intact green cloak around the island that we saw standing on the massive rock formations that afforded vantage, burn to cinder in such a short, devastating spell? What caused the fire is itself a matter of some debate. Natural causes such as lightning can start bush fires. So can an accidental cigarette, flung un-stubbed into the wilds. And equally, so can an intentional matchstick of a rancher desirous of fresh growth from the stubble. But bushfires are not unknown and in fact are as de-rigeur a part of the Australian wilds as are kangaroos and koalas. In fact, much of Australia’s vegetation and fauna have evolved with fires as an evolutionary agent. So what happened this year? This year, a hotter, drier spell from an Indian Ocean climatic condition called dipole had probably precipitated matters. But overall, there is fair unanimity that climate change is the ultimate distal culprit. Climate is changing, visibly and dramatically, across the continent. It is not that climate change can be blamed for starting a blaze, but it can be blamed for causing a general overheating that has raised average temperatures by more than one degree centigrade across Australia and most parts of the world. This in turn means that fires can spread earlier than usual, more widely than usual and more erratically than earlier predicted. On the mainland, the fires were followed by severe tornadoes and hailstorms, all at once mimicking a biblical prophecy. In Kangaroo Island, the fires were helped by an air temperature that touched 39 degrees and winds that fanned 80 km an hour and kept the blaze alive for over three weeks. In addition, the practice of leaving vast areas unburnt by controlled management-led fire regimes, mean that enough tinder was standing for the fires to consume.

I go back in time to the casuarinas-fringed beach in Flinders Chase Park, which today has borne the brunt of the blaze. Galahs are scattering raucously in front. A wallaby hops in the scrub behind us and in the distance, a gigantic sea lion seems to be balancing an apple on his nose as he presents his profile to a young damsel lying at his flippers. I can hear the larger black cockatoos screech in the distance. And nearby, so close that it tempts a selfie, a koala hangs unconcerned masticating its eucalyptus cud ever so slowly.