A Road Map for the Ruler

The path to greatness according to the Vamadeva Gita 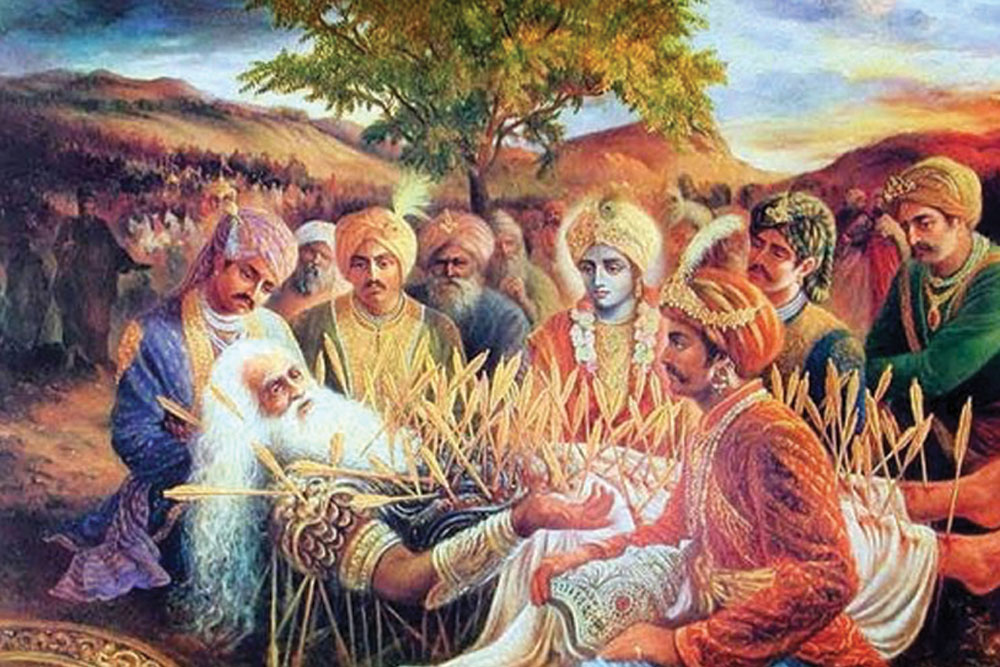 Yudhishthira asked, ‘How should a king who conducts himself in accordance with dharma and who wishes to establish himself in dharma behave? O grandfather! Please tell me.’

Bhishma replied, ‘In this connection, an ancient history is recounted. The intelligent Vamadeva sang about the truth. There was a king named Vasumana from Kosala. He was powerful and pure. He asked the illustrious maharishi Vamadeva. ‘Please instruct me in words that are full of dharma and artha, so that I conduct myself in accordance with them and do not deviate from my own dharma.’ The supreme among those who performed japa, the ascetic Vamadeva, replied.’

Vamadeva said, ‘Follow dharma alone. There is nothing that is superior to dharma. Basing themselves on dharma, kings conquer this entire earth. The king who thinks that dharma is superior to success in the matter of artha and who makes his intellect truthful finds delight in dharma. If a king looks towards adharma and acts on the basis of force alone, he is swiftly dislodged from both dharma and artha. Because his advisors are wicked and evil, he slays dharma in this world and deserves to be swiftly killed, along with his relatives. If he does not seek artha and is addicted to kama, and if he is boastful, even if he obtains the entire earth, he will swiftly perish. However, if a king concentrates on what is beneficial, is devoid of malice, conquers his senses and is intelligent, he flourishes, like an ocean into which rivers flow. A person who is proud about dharma, who thinks about dharma and artha, who undertakes action only after thinking about artha, is certain to obtain greatness. If the king does not give, is not extremely affectionate, if he always wields the rod over his subjects and if he is naturally rash, he will swiftly perish. The one without intellect does not use his intelligence to see that he has committed a wicked deed. He is covered in ill-fame and after death, attains hell. If he shows honour, donates, is pure and knows about good taste, men seek to destroy any hardships that he confronts, as if those are their own. If he does not have a guru to tell him about dharma, if he does not ask others, if he only concentrates on happiness and obtaining riches, his greatness does not last long. If he gives importance to his guru in matters connected with dharma, if he himself glances towards artha, if he places dharma at the forefront when dealing with people, his greatness lasts for a
long time.’

‘When someone who is strong imposes adharma on those who are weak, those who earn a living from him [the king’s officers] also follow that kind of conduct. They follow the king, who implements the wicked practices. With those insolent men, that kingdom is swiftly destroyed. When men naturally earn a living from such evil conduct, when the king faces a difficulty, even his relatives do not act so as to mitigate it. When the king is naturally rash, when he acts without any basis, when he does not follow the indications of the sacred texts, he is swiftly destroyed. A king who is successful in his attempt to seize an enemy in battle, and who does not then show respect to the enemy, deviates from the dharma of Kshatriyas. The king must be pleasant in speech. If he can, he must show compassion at a time of distress. He will then be loved by creatures and not be dislodged from his prosperity. If someone has done something disagreeable, he should thereafter act agreeably towards him. If he acts in this pleasant way, a person who is not liked will soon be liked. He must avoid false words. Without being asked, he must avoid doing something disagreeable. For the sake of desire, anger or hatred, he should not abandon dharma. He should not be embarrassed at questions, nor should he be careless in speaking words. He should not be hasty or malicious. That is how enemies are overcome. He should not be unduly delighted at something agreeable, nor should he be anxious at something disagreeable. The king who possesses qualities should always do what is pleasant. He obtains success in his deeds and prosperity does not desert him.’

‘The king must always favour those who have stopped acting against him and are now favourably disposed, as he must those who are devoted. That is the conduct of the virtuous in this world. There are those whose senses are not diverted. They are wise, extremely devoted and pure. They are capable and faithful. Such people must be employed for important tasks. There are those who may possess good qualities, but do not find delight in the king. They are resentful of the master’s prosperity. Such people should not be employed for tasks. There are those who are foolish and addicted to their senses. They are greedy, ignoble in their conduct and fraudulent. They have failed the tests and are cruel. They are evil in intellect and do not possess a great deal of learning. They have squandered away their possessions in drinking, gambling, women and hunting. If the king employs them in important tasks, prosperity does not remain with him. If the king protects himself and protects those whom should be protected, then the subjects prosper and it is certain that he attains greatness. When one has harmed a strong person, one should not be comforted because that person lives a long distance away. Following the conduct of hawks, such people swoop down when one is careless. If one is firm in one’s foundation, if one is not evil in one’s atman and if one knows about one’s strengths, one can engage with a weaker person, but not with one who is stronger. Having conquered the earth through valour, having protected the subjects through dharma, having been devoted to dharma, a king can be killed in battle. Everything ends in death. In this world, there is nothing without disease. Therefore, the king must be established in dharma and must protect the subjects in accordance with dharma. In the course of time, the earth prospers with five things—arrangements for protection, battle, ruling according to dharma, thinking about counsel and happiness. The king who protects these is supreme among kings. If a king is always engaged in these, he enjoys this earth.’

‘No single person is capable of paying attention to all of these together. That is the reason the king must engage ministers and advisors and enjoy the earth for a long period of time. When a person is ready to give, ready to share, mild, upright and pure, and does not abandon men, people do agreeable things to him. When one knows what is beneficial and acts in accordance with that knowledge, when he gives up his own views, then people follow him. When he does not tolerate words about artha and kama that are contrary, when he is distracted and listens to contrary views only for a limited period of time, when he does not comprehend the intellect of foremost ones who are excellent in action, regardless of whether they have been defeated or not been defeated, he deviates from the dharma of Kshatriyas. If he abandons his foremost advisors and makes those who are inferior his loved ones, he confronts disaster. When he is distressed, he doesn’t find succour. When he disrespects relatives with beneficial qualities because of his hatred, when his atman is not firm, when his anger is firm, his prosperity doesn’t remain close to him and give him delight. When he acts pleasantly so as to bring those with good qualities under his control, even though they are not close to his heart, his fame is established for a long time. ‘Which men are devoted to the king? Which seek refuge because of fear? Who amongst them has the taint of actually being neutral?’ Always think of these things. Yayati, the son of Nahusha, declared this teaching for kings. ‘If one is engaged in conquering men, one can slay a supreme enemy.’

That just about sums it up.

No One is Beyond Redemption

The Aura of Austerity