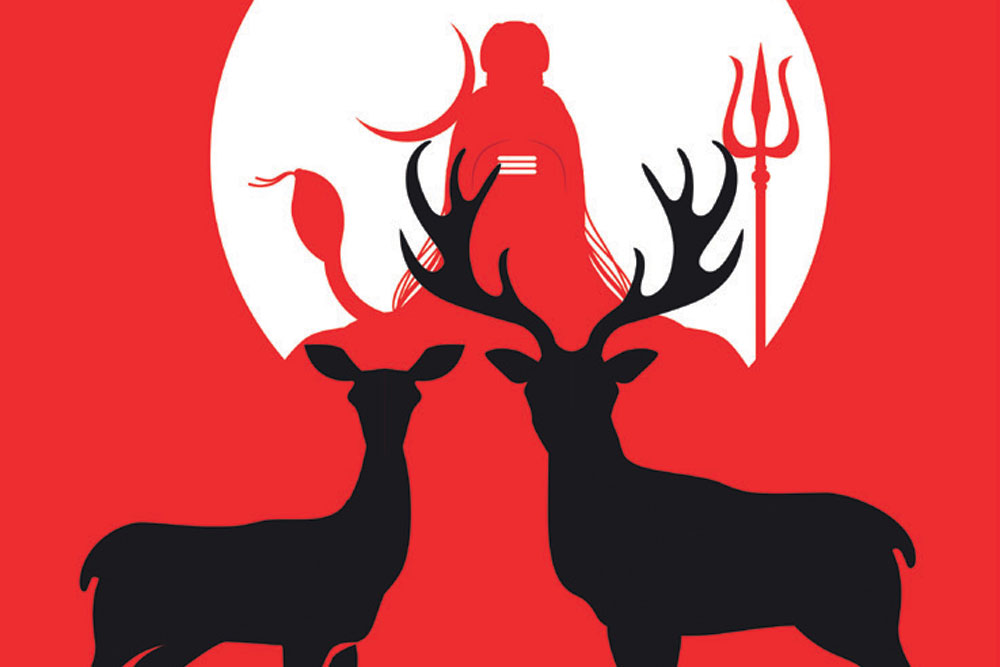 
SUTA TOLD THE rishis a story about a hunter. Bhilla and vyadha are used equivalently for a hunter.

“In earlier times, there was a bhilla in a forest. His name was Gurudruha. He was cruel. He went to the forest and hunted animals every day. On one occasion, the extremely beautiful Shivaratri arrived. However, the evil-souled one who resided in the forest did not know this. At that time, the bhilla’s mother, father and wife suffered from hunger. He quickly seized his bow and left, desiring to cause violence to some animal. Such was destiny that he could find nothing. The sun set and he was filled with great sorrow. “I have not obtained anything today. What will happen to my children and parents, who are at home? I have a wife. What will happen to her? I must return only after I have got something, not otherwise.” Thinking this, the vyadha approached a water body. There was a path that led down to the water. He went and stationed himself there. “Some living being is certain to come here. Having killed it, I will happily return to my own house, successful in my objective.” Thinking this, the bhilla climbed a bilva tree, taking some water with him.”

“When it was the first yama [a period of three hours] of the night, a doe arrived. Seeing this, wishing to kill her, he quickly affixed a shining arrow to his bow. When he did this, some water and some bilva leaves fell down on a Shiva lingam that was underneath. This was the first yama and he worshipped Shiva. On hearing the sound, the doe was scared. The doe asked, “O hunter! What do you wish to do?” The vyadha replied, “My family is hungry. I will kill you now and satisfy them.” The doe said, “There is no doubt that I am blessed. You will be satisfied with my flesh and my body will serve some purpose. Good merits are generated as a result of helping someone else. However, all my young children are at home now. I will entrust their care to my sister and husband and return. Know that my words are not false. There is no doubt that I will return again to your presence.” When she said this, the vyadha did not pay any heed to her words. Extremely surprised and scared, she again addressed him. The doe said, “O hunter! I am telling you that I take this pledge. I will return to you from my own house.” When the doe took this pledge, the hunter believed her and said, “Go home.” Happy, the doe drank the water and returned to the hermitage where her home was. In this way, he spent the first yama without sleeping.”

“The doe had a sister. When this deer did not see her, she was worried. Following her trail, she arrived there, looking for water. On seeing her, the bhilla drew the string of his bow back, ready to shoot the arrow. As was the case earlier, water and leaves fell down on Shiva’s head. This was the second yama and there was a worship of Shambhu. Seeing him, the doe asked, “What are you doing?” He repeated what he had said earlier. Hearing this, the doe also said what had been said earlier. The doe replied, “O hunter! Hearing this, I am blessed. My having a body has been rendered successful. This body is temporary, but can be used to do others a good turn. However, my infant children are at home. I will entrust them to the care of my husband and return here again.” The vyadha responded, “I do not believe what you have said.” Hearing this, the doe took a pledge in Hara’s name. Thus addressed, the hunter told the doe, “Go.” The doe drank the water and returned to her own home. He also spent the second yama without any sleep.”

“Meanwhile, the third yama arrived. The stag was surprised at this delay. During that yama, intent on searching, he arrived and stood on the path that led to the water. The hunter saw a healthy deer and was delighted. He fixed an arrow to his bow and got ready to kill him. When he did this, because of his former radiant prarabdha karma, some bilva leaves were dislodged and fell down on Shiva. It was his good fortune that this was the third yama of the night. Hearing the sound, the stag asked, “What are you doing?” The hunter replied, “For the sake of my family, I am going to kill you.” The stag said, “I am blessed that my well-nourished body will satisfy you. If the body is not used to do a good turn to someone, it is useless. If a person is capable, but does not help another person, all his capability is futile. In the world hereafter, he goes to hell. However, I have infant children and I have to entrust them to their mother’s care. I assure you that having done this, I will return to you again.” The vyadha said, “All those who came here were just like you. They took a pledge and left this place. But they did not return. They were deceivers. Having faced a difficulty, you are also resorting to deceit. If I do this, how will I earn my living?” The stag replied, “O hunter! There is no falsehood in me. Everything in the entire universe, mobile and immobile objects, is established on truth. A deceiver’s words dissolve his good merits in an instant. O bhilla! Nevertheless, listen to the truthful pledge that I am taking.” Hearing these words, the hunter said, “Go and return quickly.” The stag drank the water and left.”


Having seen Shiva’s form, the hunter obtained emancipation instantly. He fell down at Shiva’s feet and said, ‘I have got everything.’ Pleased with him, Shiva gave him the name of Guha. He glanced at him with eyes of compassion and gave him a divine boon. ‘You will enjoy the divine objects of pleasure you desire’

“Having made their pledges, all of them met at the hermitage. They spoke to each other and heard each other’s account. Tied by the bond of truth, they made up their minds to return. They comforted the children and without any hesitation, got ready to return. The elder doe addressed her husband. “O deer! Without you, how will the children remain here? I am the one who took the pledge first. Therefore, I should go.” Hearing her words, the younger one replied, “I am your servant. I must go now. You remain here.” Hearing this, the stag replied, “I am the one who will go there. The two of you should stay here. Mothers protect their children.” Hearing the words of the husband, they did not think that this was in accordance with dharma. They cheerfully told their husband, “Shame on life as a widow.” They entrusted the care of the children to others who resided there. All of them went to the place where the vyadha was. On seeing this, all the children also followed them. “Our path must also be the one they have followed.” Seeing them, the hunter was delighted and fixed an arrow to his bow. Yet again, water and leaves fell down on top of Shiva. In this way, the auspicious worship for the fourth yama took place. In an instant, all of his sins were reduced to ashes.”

“The two does and the stag spoke to the hunter. “Please show us your compassion and make the bearing of our bodies successful.” Hearing their words, the vyadha was filled with wonder. As a result of the power of worshipping Shiva, he obtained jnana. “These deer are blessed. Though they are devoid of jnana, they should be revered. They are engaged in giving up their bodies for others. Having been born as a human, what have I achieved? I nourish my body by making the bodies of others suffer. Having committed sins since birth, where will I go? Shame on my life.” When this jnana was generated, he refrained from releasing the arrow. He said, “O best among deer! Leave. Go in peace.” When he said this, Shankara was pleased. He showed him his own form. In his compassion, Shambhu touched the hunter and spoke to him. “O bhilla! I am pleased at your vrata. Tell me about the boon you desire.” Having seen Shiva’s form, the hunter obtained emancipation instantly. He fell down at Shiva’s feet and said, “I have got everything.” Pleased with him, Shiva gave him the name of Guha. He glanced at him with eyes of compassion and gave him a divine boon. Shiva said, “You will now enjoy the divine objects of pleasure you desire. You will reside in your divine capital of Shringaverapura. Without any impediments, your lineage will prosper and you will be praised by even the gods. Rama will certainly come to your house. He is my devotee and out of affection, will become your friend. With your mind devoted to me, you will obtain emancipation, which is extremely difficult to get.” Meanwhile, having seen Shankara, all the deer prostrated themselves before him and were freed from their births as deer. On the mountain known as Arbuda, Shiva became Vyadheshvara Achaleshvara. [Achala means someone who does not move. The Achaleshvara (Achalesha) temple is near Mount Abu, confirming the identification of Arbuda with Mount Abu. Achaleshvara and Vyadheshvara refer to the same lingam.] After having considered all the sacred texts and many aspects of dharma, the vrata of Shivaratri has been declared to be the best.”