It is not a great film, but certainly worth viewing once 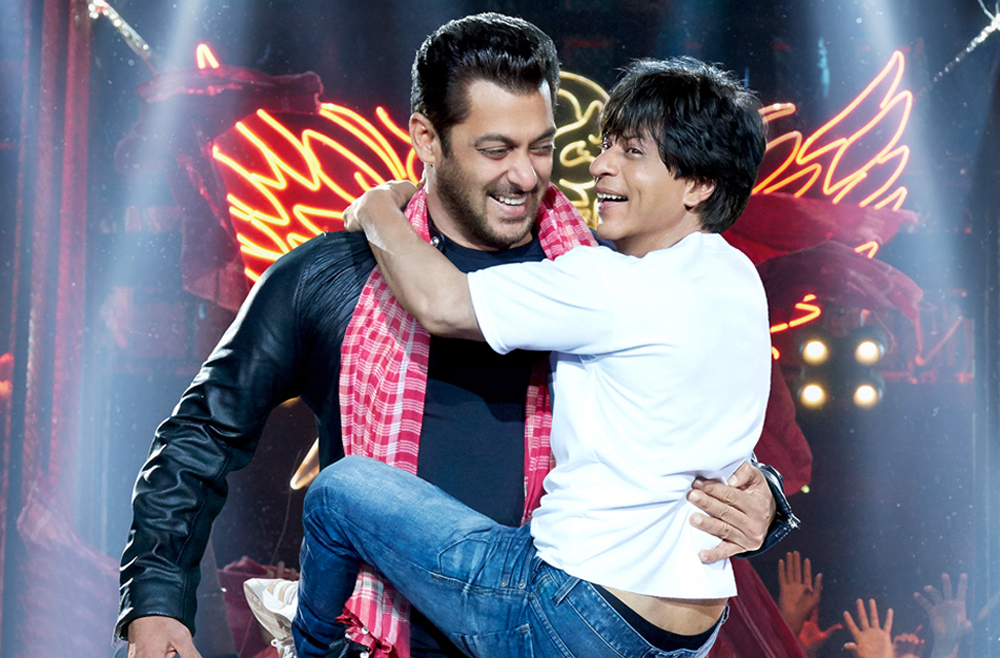 A fantastical film that holds you in fits and starts with its sheer unpredictability, ‘Zero’ has one uncanny scene that may reflect what writer Himanshu Sharma is trying to get at in the movie. The short man, Bauua Singh (Shah Rukh Khan), after successfully taking part in a dance competition, has inveigled himself into a film party. With a striking visage placed delicately on a low body stature, he cuts an amusing figure, and with his entertaining banter about men and women, and about matters romantic, women are comfortable with him. Dressed in a tuxedo and standing on a ledge at the terrace party, he demonstrates the magic trick he is well known for – swiping the night sky with his arm and erasing all the stars from the zodiac.

Watching his show are Hindi film heroines of recent generations – Sridevi (her last film appearance), Kajol, Juhi Chawla, Rani Mukerji, Karishma Kapoor, Deepika Padukone and Alia Bhatt. But somehow, Bauua, who had removed the stars earlier, standing on the terrace of his home at Meerut, is unable to do so in the public view of all these actresses. The stars in the cosmos just keep twinkling away in the sky, while the stars on earth tire of his failed attempts to delete the heavens of their ornaments. The ladies walk away disappointed.

In this sense, ‘Zero’ is a curiously scripted film about the discord between personal identity and photographic image, the conundrum that many public figures live with; some accepting it, and others waging a life long struggle with it. The short man of Meerut is convinced that he is a charming and handsome star, but his mirror reflection shows him a gnome. The astrophysicist with cerebral palsy whom he meets, Aafia (Anushka Sharma), is a woman of outstanding capability who is treated just as Bauua is, a freak of nature to be handled with kid gloves. The public image turns into a distortion of the inner self, and this never seems to change over the years that the individual grows, alters, ages and dies. Both the short man and the woman with the cerebral short circuit, understand each other, and fall in love.

This notion of the fixed mirror image we have of ourselves in the space/ time continuum in which we live, takes us to the second extraordinary scene in ‘Zero’. Sometime later in the film, Aafia is in the US and is working on a space mission to Mars. Suspend for a minute, all disbelief at the absurdity of what follows. Assume, hypothetically, that Bauua has turned up at her space mission to express profound regret for having let her down in the course of their romantic relationship. What takes place then is an argument between the estranged couple, and during the quarrel that ensues, Afia touches a control button in her laboratory that simulates ‘zero gravity’. Instantly, they both float towards the ceiling and quarrel like ‘normal’ people. For Bauua, height is immaterial without gravity, and, in fact, shortness may actually be a levered advantage in this simulated alteration of the laws of physics. For Afia, she is temporarily free of the wheelchair that she has been bound to all her life. Now, with their respective challenges non existent, they are equal before each other and the physical universe.

‘Zero’ is a clever movie that uses abstract metaphors. But it also sometimes just plays with the ordinary supposition that the character in a film could be interchangeable with the actor who plays him or her. Now the cause of the temporary estrangement between Bauua and Afia has been the beautiful singer and film actress, Babita Kumari (Katrina Kaif), who the short man is enchanted by. She is an intelligent woman, conscious of the difference between stardom and her own identity, and has been dumped by her lover (Abhay Deol). She is now an alcoholic. Without doubt Babita Kumari is a not so veiled reference to the fine actress of the 1950s and early ‘60s, Meena Kumari. Bouts of drinking had cut short her glittering career and eventually caused her death at the age of 38.

In a drunk conversation with Bauua in a car, Babita tells him her family history, dramatising it to the point of making it nonsensical. Oddly enough, the personal history she speaks of seems very close to that of Katrina Kaif’s own mixed heritage and her inter-continental arrival as an actress in Hindi cinema. What ‘Zero’ is speaking of, with movie stars and their lives scattered across the fanciful extravaganza of its mounting and its plot, is the conundrum of stardom.

Being perceived as not who you actually are is a conditional status of the actor in Hindi cinema, and the actor may struggle to live with it, particularly when his or her career is over. This is a fair enough position. But the writer of this movie strays, by extending the same idea to people who are physically challenged, and who have serious psychological conflicts within their own perceived identity. While interesting as an abstract question, this comparative analogy raises ethical questions. Is Stephen Hawking’s lifelong restriction to a wheelchair comparable to the suffering of a celebrity like Michael Jackson who developed, what could be called, a terminal image impasse?

On the level of cinematic realism, the plot of ‘Zero’ is plainly batshit crazy. But the film has an enthralling visual display, has a few short and gripping star turns, and throws up some fascinating analogues. It is not a great film, but certainly worth viewing once.