Unlike a Bollywood Kid

Rhea Kapoor, star child and film producer, does not read ‘tabloidy stuff’ and has an indifferent attitude to fame and all that comes with it 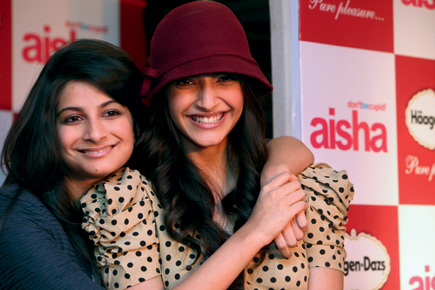 Rhea Kapoor, star child and film producer, does not read ‘tabloidy stuff’ and has an indifferent attitude to fame and all that comes with it


Rhea Kapoor is dressed in tracks and a T-shirt and is wiping cupcake batter off her hands. It is her day off and after burning calories in an intense kickboxing class, she has decided to make cupcakes—a task she is obsessed with these days. But even though she offers these cakes to us, she does not want a bite: “Yesterday I went to Gajalee and had so much fried fish. I am taking it easy.”

It has taken a while to arrange this meeting, because even though she is not as much in the limelight as her sister Sonam Kapoor, or father Anil Kapoor, she is one busy lady. After all, she is the one at the helm at Anil Kapoor’s production house and is working on its next two movies simultaneously. And going by how deeply she was involved in the production of Aisha, she definitely has a lot on her plate, besides cupcakes.

She is involved in all aspects of the film production process. Along with looking for new stories and overseeing scripts, music and post production, Rhea also helps style her sister—who is now considered one of Bollywood’s real fashionistas. You can often spot Rhea at fashion weeks, sitting in the front row taking pictures as models walk down the ramp. No wonder, along with wearing international designers such as Dior and Elie Saab, Sonam is often seen in clothes by Indian designers such as Masaba Gupta and Shivan and Narresh.

Today she looks relaxed as she meets us at the Kapoor residence in Juhu. Warm and friendly, this is a different kind of star kid. She hugs me and apologises for the delay in arranging the meeting, and then launches rightaway into a no-holds-barred conversation. Right now, she is busy putting final touches on two scripts that should go on floor soon. “One is a love story with Sonam. The other is a coming of age story—about relationships that are flawed, real relationships, where questions about sexuality and identity are raised. It will be a movie about messed up 20-somethings. It will be different from anything out there. When its writers came to me, I was so excited. We have worked a lot on this,” she says. She likes being involved in everything, and remembers sitting with Amit Trivedi for a year trying to get the music of Aisha just right. “It was massy but was still compatible with the characters in the movie.” Even though the music was a hit, the movie did not do as well, but Rhea has no regrets. She regards it as a “guilty pleasure movie” much like Clueless or Romi and Michele’s High School Reunion. “It was for girls in a particular age group. And it’s a movie everyone likes to watch, even though with guilt. But I never said I was teaching somebody something. I did what I had to do, and it was great. Making the movie taught me a lot about dealing with people—you can’t shout and expect respect, you need to earn it.”

She’s just 25, but the focus with which she speaks suggests maturity beyond her years. It could be due to her stint of living alone in New York, where she studied drama and romantic literature. At the Stella Adler Studio of Acting, where she trained, Rhea learnt one of her major life lessons: “It taught me that you have to do stupid things and not care.” Living in New York also instilled in her a sense of individuality and independence. “I wasn’t homesick once. I partied a lot and my motto was ‘Don’t do anything twice.’” This was also where she discovered her sense of style: “In New York, your day and life starts when you step out in the streets. You need to communicate who you are. I discovered vintage fashion [which] makes you decide what your style is, because vintage is not trendy.”

It was a good time. And a wild one. Rhea laughs as she remembers gatecrashing a Zac Posen fashion show with her best friend. “So I was wearing my stylish fur coat and we saw two seats free in the second row. Anna Wintour [editor of the American fashion magazine Vogue] was sitting nearby. It was mad. I was sure I was going to get caught and deported.”

Over time, Rhea realised that what you wear says so much about you. Her philosophy now is clear—“If you don’t care about how you look, people won’t take you seriously.” But when she returned to Mumbai, she realised that her views did not quite fit in. “Here everyone is watching what you do. I needed to change my energy. Now I do what I want to—I am the strange person who wears vintage stuff everywhere I go. But that’s me.”

She may have grown up as Anil Kapoor’s daughter, but Rhea has a modest opinion of fame and all that comes with it. “I think because I have seen it, I have a clearer perspective. I don’t have fame. Someone once said, ‘Fame is what happens outside of you.’ Other people change because of fame, you remain the same person. My dad has always been my dad, even if people outside saw different things. Same goes for Sonam. People outside talk about hype up, hype down. But we remain the same. It’s not worth your peace of mind. You have to just learn to be yourself when you have it, and be happy when you don’t.” And though she is a practical girl, not given to being sentimental easily, she betrays a hint of annoyance when she talks about the media putting her family down. “I read this piece this Delhi journalist had written, where she became so nasty about me, my dad and Sonam. And I was like, ‘Why would you do that?’ That’s why I have stopped reading tabloidy stuff and just focus on reading The New York Times or The New Yorker.”

These days, she is also busy watching fashion documentaries and movies: “I am re-watching the Brat Pack movies.” And listening to music: “I love Taylor Swift’s new album.” Soon her movies will be under production and life will be again about living her Bollywood dream—making movies today’s youth can relate with. Until then, though, it is all about finding the perfect caramel icing recipe. We wish her luck.