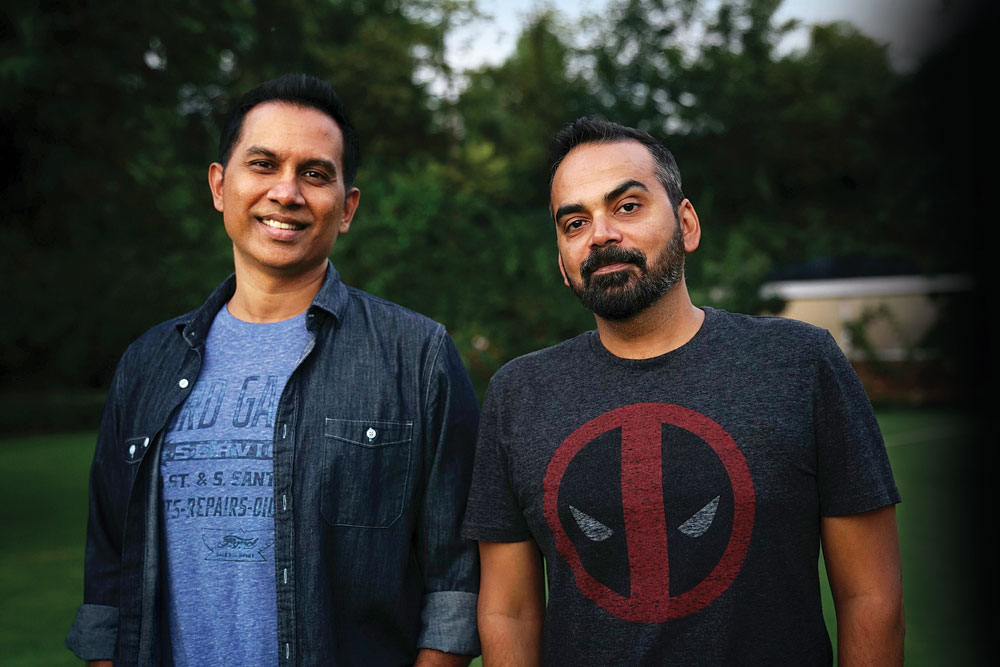 
IN THEIR 2013 zombie movie, Go Goa Gone, Raj Nidimoru and Krishna DK, collectively known as Raj and DK, had Chiranjeevi paying homage to Michael Jackson’s Thriller music video. Kitted out in a faux red leather jacket and trousers, Chiranjeevi does a fairly good imitation, complete with fake canines, as he vigorously thrusts to SP Balasubrahmanyam’s lyrical voice singing Golimaar from the 1985 film Donga.

In many ways, the song embodies the appeal of the two men who are now Bollywood’s hottest creative couple, riding on the back of the successful second season of The Family Man. Raised in Tirupati, and Chittoor in Andhra Pradesh respectively, Raj and DK met at Sri Venkateswara College of Engineering & Technology in Tirupati, went to the US to pursue the great American dream as IT consultants and then returned, via a series of independent films, to India, Mumbai, specifically.

It is here, after a series of experiments, some successful, others less so, that they have now turned producers, with The Family Man franchise and the horror-comedy Stree under their belt, and some big-ticket projects in the offing. Among them: the Indian version of Amazon Prime Video’s Citadel, a global series created by the Russo Brothers whose English version stars Priyanka Chopra Jonas and Richard Madden; a series currently being shot with Shahid Kapoor; and another period comedy being directed by Tumbbad’s Rahi Anil Barve.

In a sea of self-referential cinema, Raj and DK are unique, in that they combine cultural rootedness with a national and indeed global appeal. Their movies are peppered with ideas and language that are of the moment. The much-appreciated second season of The Family Man, which dropped on Amazon Prime on June 3rd, is studded with contemporary references. There is a hat-tip to Mani Ratnam’s 1988 film, Agni Natchathiram with two characters named after the movie’s two lead actors; Karthik and Prabhu. To Balasubrahmanyam, whose music they grew up listening to. The song is Sach mere yaar hai from Saagar (1985), where Kamal Haasan walked away with all the honours. And there’s another tribute to the 1990 Tamil comedy classic Michael Madana Kama Rajan written by and starring Kamal Haasan. “If Shor in the City was our love letter to Mumbai, this is our love letter to Chennai,” says DK.

DK says they wanted to tell the story of a James Bond-like figure set in India, an inclusive India. “We wanted to embrace all cultures. So Srikant Tiwari (Manoj Bajpayee’s character in The Family Man) is from Uttar Pradesh and his wife is Tamilian. His best friend JK Talpade is from Maharashtra, Zoya is from Delhi, Pasha is from the south. We cast actors from Kashmir,” he says. Their work has straddled several genres, beginning with an American indie film Flavors (2003), which was produced by serial investor Anupam Mittal. “We were learning on the job,” says Raj, “Doing everything; camera, sound, teaching actors how to act. Flavors was our film school.” By 2009 they had saved enough money to make 99, a caper set in the world of cricket betting, but they were still hedging their bets, says Krishna, “Thinking we can go back to our jobs if it doesn’t work out.” DK was working out of Detroit, Michigan, while Raj was in Minneapolis, Minnesota, and then Austin, Texas. It was only with Shor in the City in 2010 and Go Goa Gone in 2013, that they realised they could finally make movies for a living. The former was produced by Ekta Kapoor and the latter by Eros and Dinesh Vijan of Illuminati Films, co-founded by Saif Ali Khan.

But then they briefly lost their way, as usually happens with independent filmmakers who are suddenly asked to conform to certain studio expectations of star vehicles. Happy Ending (2014) which is about a writer (Saif Ali Khan), and a star (Govinda) failed, as did A Gentleman: Sundar, Susheel, Risky (2017) which is about a retired covert operations expert who also happens to have a double who has a boring corporate job.


A few years ago, they decided to turn producer themselves and got Amar Kaushik, their assistant director on Go Goa Gone to direct Stree, a horror-comedy movie they had written some time ago. It was a smash hit in 2018 and since then their star has been on the ascendant. Kaushik calls them amazingly creative and often ahead of their times because of how differently they think. “They are so chilled out on the set,” he says, “that you don’t realise what out-of-the-box content is being created. It was their confidence in the subject that made me take on the challenge of Stree as a debut.”

But success, like failure, has its perils. “Suddenly you get offered five horror comedies of the same kind. You need a lot of willpower to not sign them on,” says Raj. So it was just as well that Amazon Prime’s The Family Man in 2019 brought them many new fans and became the high point of actor Bajpayee’s career. It also managed to subversively speak of a more nuanced nationalism in the time of ‘How is the Josh’ hysteria. Their agent is a patriot but he is also open to the viewpoint of others.

In Season Two, the character of Raji (Samantha Akkineni), a soldier who fights for Eelam, symbolises this thought best: one man’s freedom fighter is another man’s terrorist. Or as Bajpayee’s Tiwari puts it; “The terrorists need to win just once. We need to win every day.” Suparn Varma their friend and co-director on the second season of The Family Man, says Raj and DK truly believe there is more than one side to everything, whichever side of the fence you’re on, or indeed if you’re on the fence. So if in Season Two, Raji literally spits in the face of Srikant Tiwari when he is spinning a yarn about his trauma to her, chronicling the horrors visited upon her and her family by the Sri Lankan army, in Season One, a Kashmiri soldier is warned by his superior not to call terrorists martyrs. “How many times do I have to give proof of my nationalism,” asks the soldier.

“Long back we realised we are not from the industry and it’s not easy to break in. So the only thing to do was to create our own, tell our own stories, find our unique voice, says Raj Nidimoru, writer and director

In the India of today, this is a constant. Identities have become performative. A patriot has to make his patriotism heard and seen. In Raj and DK’s world, a patriot can feel guilt at having wrongly targeted someone and try for expiation, yet give his all for the next mission that involves national security as defined by the state. He defends the position, not the person, as he says. In many ways, there is a certain idealism in Raj and DK’s world, where even if a prime minister acts from a place of ego, it ends up benefiting the nation. So when PM Basu (a Bengali woman who may or may not be their ode to Mamata Banerjee, played by Seema Biswas) and Rupatunga (a stand-in for Sri Lankan President Mahinda Rajapaksa) are striking a deal, it is not merely self-interest that is served but India’s national interest as well. For Raj and DK, a true patriot wants the nation to do well but not at the cost of covering up errors.

IT WILL BE interesting to watch where Season Three will take audiences, now that azaadi and eelam have been addressed. A clue at the end of the show is an operation that is about to be launched from China. And that is the unique voice that Raj and DK bring to their work, the ability to surprise audiences with left-field ideas. “Long back we realised we are not from the industry and it’s not easy to break in. So the only thing to do was to create our own, tell our own stories, find our unique voice,” says Raj.

Friends say there is a perfect understanding between them. While Raj is the heart, DK is the mind. They describe their collaboration in similar terms. They don’t see themselves with fixed roles. They brainstorm a lot, create a structure and then write in turns. One of their oldest friends, novelist, stand-up comedian and co-writer, Suman Kumar, says they keep it real and fresh.

DK says in Andhra Pradesh, the film watching culture is so strong that everyone is mad about the movies and everyone thinks they can make a movie—a bit like in the 2021 Telugu film, Cinema Bandi, which they produced under their banner D2R, where two men chance upon a movie camera in an auto rickshaw and decide to make a movie, because any one can. But more than Andhra, says Kumar, “We are small town boys. That makes a lot of difference.” Working with them on a daily basis is a glorious adventure, he says, “I have not seen anyone like them: perennially pregnant with stories.”

And we the audience are waiting for those stories to come to life.