There’s Something about Sara 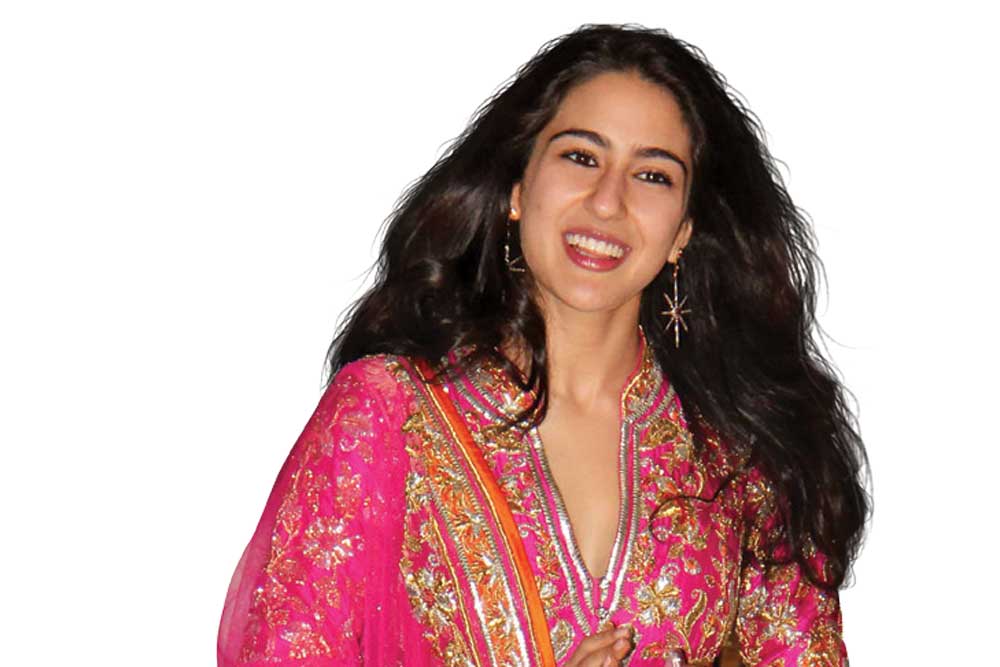 Sara Ali Khan hasn’t been on screen yet, but she’s made some fans already. Saif Ali Khan and Amrita Singh’s daughter, who reportedly ditched a seat at Columbia University to pursue a childhood fascination with acting, made quite the impression on guests (mostly film industry folk) at a wedding reception hosted by Abu Jani and Sandeep Khosla last weekend. The designer duo extended invitations for their niece’s big night to all their friends, and the evening turned out to be one of song, dance and some surprising performances.

Karan Johar, who clearly knows the steps to many a Bollywood dance number, sportingly broke into Radha on the Dance Floor from his own film, and Shweta Bachchan did a slinky version of Pallu Latke, with mother Jaya Bachchan joining her for a few moments. Sonam Kapoor feigned shyness even as she was coaxed to recreate the Prem Ratan Dhan Payo song, but it was Sara who turned out to be the traffic stopper of the night, with her perfectly rehearsed and confident performance to the hit 90s track Saat Samundar—and this, in a heavy sari, no less.

I ran into Varun Dhawan’s mother the morning after the party and she couldn’t stop gushing about Sara’s unmistakable star quality. Laali Dhawan said she’d spent some time with Sara a few months ago while travelling in a group to attend a party hosted by Hyderabad socialite Pinky Reddy.

Sara will debut opposite Sushant Singh Rajput in Fitoor director Abhishek Kapoor’s Kedarnath, which is back on track after Ronnie Screwvala recently stepped in as a co- producer after a falling out between Abhishek and his co-producer Prernaa Arora led to the film being temporary stalled. She’s also been signed to be the leading lady in Rohit Shetty’s Simbaa, an action-comedy starring Ranveer Singh.

The young girl’s father Saif had revealed that years ago, when he was performing in a musical stage show, he’d noticed his then six or seven-year- old daughter watching and imitating Aishwarya Rai’s dance steps from behind the curtain. That’s when he says he’d realised there was a likelihood she was going to follow in her parents’ footsteps.

By the time you read this, Shoojit Sircar may have taken off to spend time with his friend and Piku actor Irrfan Khan. Shoojit and Irrfan were meant to start a new film shortly, but the actor’s health scare has put his career on hold for now.

Shoojit, along with Tigmanshu Dhulia, are among the few film industry folk who Irrfan’s family has stayed in touch with while the actor is being treated. Shoojit had asked to spend time with Irrfan after he was done with the release of October, and the actor is believed to have agreed.

According to the industry grapevine, the director of a big Telugu hit who’d been signed to remake his own film in Hindi has been dropped from the project after he embarrassed the producer by openly dissing the leading man who’d been approached to star in the film.

Turns out, the director had his heart set on a young male star whose wife is currently pregnant with their second baby. The director had reportedly given the star his word that if he’d remake the movie, he’d do it with him in the lead. But the producer is no fan of the said star, and approached another young actor, with whom he’d worked in his last film, a moderately successful comedy. When news reached the director that this ‘other actor’ might be doing the film, he gave an interview saying he didn’t think that the actor fit the role, but he ‘might consider him’ if he was willing to lose around 20 kg for the part.

The actor is believed to have given the producer a piece of his mind, and now one hears that the director himself may have been fired from the project.